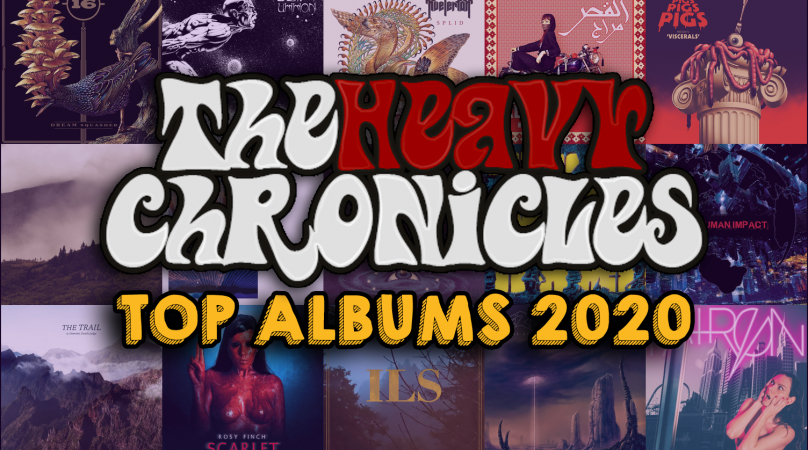 Behind this stoner-friendly moniker lies an absolute gem of gothic mud rock. This outstanding band fronted by bewitching Daniel Pruit (a perfect cross between Evan Patterson’s crooning and Michael Parks Jr.’s sensitivity), takes us on a journey across a ghostly and wild America oozing the spiritual force of native gods. A mind-elevating and highly captivating record that won’t leave anyone unmoved.

Deftones are once again ahead of their time, twenty-five years after they stamped their indelible mark on the 90s alternative metal scene. “Ohms” is a forward-thinking album will wrap you in its bubble of sharp yet shoegaze-filled soundscapes, burning like a comet about to annihilate this ill world’s certitudes. Paradoxically, you’ll never hear such comforting music, and be sure that 30+ year-old folks will enjoy it on repeat. All bow to Deftones’ greatness.

This 2020 Kvelertak vintage was a make or break deal. Whereas former frontman Erlend Hjelvik is now dedicating himself to his viking folk career, the Stavanger berserkers hired their buddy Ivar Nikolaisen to take the lead. The skinny blonde destroys all eardrums with a sheer punk-style onslaught. “Splid” is a full-on anthemic blast of hard rock’n’roll splashed with their trademark punk and black metal blend. Predictable, but hell it feels good!

Kicking off a sludge record with folk guitar: check. Pulverizing each atom you thought was part of your mortal shell: double check. The Finn won’t weigh themselves down with the usual sludge specs, and weave galvanizing atmospheres while reaching unsuspected heights thanks to a stellar production. With this fourth record, Demonic Death Judge have deserved the award of most underrated sludge band of the year.

The Chicago UFO treat us to eleven phantasmagorical heavy psych tracks, somewhere between Elder (the proggy side), Elephant Tree (the groove) and Pink Floyd (the grace and boldness). “Chaotic Divine” is so hard to pigeonhole it makes it addictive. I mean, the saxophone is subliminal, while the songs are as hefty as they are cosmic, stirring and soothing. The divine chaos isn’t within everyone’s grasp, yet the open-minded will see salvation.

Looking for a party? Be our guests. With Al-Qasar, Blaak Heat’s mastermind Thomas Bellier materialize his music obsessions with an Arab-speaking record that perfectly blends oud and fuzz-driven surf riffage. Something your hips won’t resist.

We didn’t see them coming, yet French trio Slift skyrocketed us to outer space with their new album ‘Ummon’, which stunning artwork was designed by Caza. This is a seventy two-minute trio (repeated a hundredfold) aboard ISS, the Intersideral Stoner Ship. We’re now ready for the on-stage takeoff.

The soundtrack of the infamous year 2020. We already had our share of tensions and anxiety, bu Chris Spencer and his comrades rub it in harder with a debut full-length that perfectly depicts our sickened civilization. Get ready for more, as the band already recorded new material (including one about the virus) during lockdown.

Recorded during lockdown, this sixteenth album from the Australian troupe sounds as alive as ever. It comes as a great followup to their 2017 « »Flying Microtonal Banana », with its microtonal guitars and contretemps, while constantly keeping things fun. Proof with « Intrasport » which could be the eastern psych version of « Toxic » (I’m indeed referring to Britney’s song).

I had no expectations, yet I was blown away by the way Elephant Tree have honed their sound, effortlessly mastering everything they venture on this album, with enough talent and a subtle dosage of doom, shoegaze or folk. An excellent vintage.

Never a sophomore album had been so eagerly awaited than the follow-up to Lowrider’s cult ‘Ode To Io’, twenty years after its release. ‘Refractions’ did far more than meeting everyone’s expectations: it skyrocketed them, and send all copycats back to their studies. Beyond a brilliant return, Lowrider treat us to a sonic thrill worthy of repeated orgasm, that won’t stop once the music is over and will fill the air for a long time to come. The album of the year, hands down.

There isn’t a more significant token of quality than listening to an album several times a week, almost nine months after its release. “Scarlet” is still on heavy rotation and the thrill of its sonic discharges won’t stop, quite the contrary actually! Mirei’s bewitching vocals exalt the sharp riffs, running through your spine like a sharp blade that brushes the skin, causing an ambiguous half-tense half-delightful adrenaline rush. Until the next one, dive back into the (blood) bath with Rosy Finch.

You couldn’t get more damned than –(16)-. After overcoming a few twists of fate (tragedies, lineup changes), a fucking pandemic hit the world right when the Californian outfit deliver their best album to date. Although it didn’t get the attention it deserved, “Dream Squasher” is a banger from beginning to end, spreading its atomic brand of sludge through some nice pace and songwriting shifts (from the straightforwardness of “Spanish Fly” to the dreamy “Sadlands”). Just as the artwork, the outcome is brilliant. Squashing dreams, but definitely not hopes.

Like an end-of-world omen, Chris Spencer and his NYC fellas have buried Unsane for good and returned with their new project Human Impact in March. Definitely the soundtrack to the previous world’s end. Both so close and so far of its members’ former bands, Human Impact keep it fierce and opt for a heavy, groovy yet and almost noxiously grim record that would look good wrapped in a Killing Joke package. Unsane is dead, long live Human Impact.

Oregon is like Brittany or Normandy for France: it’s all green because it won’t stop raining. The other characteristic of this region, aside from being isolated, is being an incredible breeding ground for music. Stepping into limelight, ILS come up with a full box of sonic grenades that will make your ear bleed. Noisy, sludgy, brutal and disturbing, ‘Curse’ is worthy of a plague descending upon your speakers, so expect not to come out of its listening unscathed.

For those who see Lowrider as Kyuss’ finest copycats, “Refractions” would probably sound as a concentrate of stoner rock gimmicks. Let them haters be haters. Lowfuckinrider just delivered the new stoner rock touchstone for the twenty years to come. Interstellar riffs, mammoth grooves, heavy cavalcades, volcanic fuzz, vocals as hot as the desert wind… EVERYTHING in here sounds perfect. A Swedish band once named themselves after Kyuss’ “Demon Cleaner”. I bet you that you will soon hear from a band called “Pipe Rider”, for this album is just P.E.R.F.E.C.T.I.O.N.

Guys who hire French comic book illustrator Philippe Caza to design their artwork can only be men of taste. This new album depicts a certain vision of the seventies, and for good reason. It’s the story of “Humanos”, which bubbles were as loud as guitars and drawings were as acid as Hawkwind’s LSD. Needless to get back to your old chapters of “Metal Hurlant” (i.e. the aforementioned comic book), “Ummon” is an epic cosmic trip afloat Venus lava seas heading towards Filodendra, a luxurious, calm and voluptuous capital-planet.

Lo, the real « patron » is back. Helped by Alain Johannes, our sensual and provocative desert crooner lays irresistible vocals to the profit of raspy and sexy boogie-driven anthems dressed in leather and latex. It all sounds as if Iggy dropped Bowie for Josh Homme, to record “The Idiot” on the Strip Blvd. Burning hot, robotic and goddamn smooth all at once.

« He who does not know where he comes from cannot know where he is going because he does not know where he is ». This repeated formula should be written at the door of every studio entrance, to bands seeking for wind of change. Firmly rooted between Sabbath’s doom and Pink Floyd’s psychedelia, Elephant Tree treat us to a forward-thinking album that never looks back in the rearview mirror of the 70s. Smart, never pretentious, these architects master the musical map and erase any genre boundaries they venture into, their very own way.

Tohu Wa Bohu is a Hebrew term for “the raw material” necessary to creation. An inhospitable pre-universe to generate the big bang, the origin of everything. In this, Lord Buffalo build a void-tearing tower of hammering keyboards, moaning guitars and squealing violins. Out of this organized chaos comes an unsuspected beauty, dark and gloomy. Mystical frontman Daniel Pruit is its revelator. When he sings, the beauty of the world appears.

This album was highly anticipated by every fan of the Norwegian outfit (including myself), for good reasons: it introduced a new frontman and drummer, Kurt Ballou back at the production helm, and special guests to top it off (oh hey, Troy Sanders!). « Splid » is remarkably tight and catchy, and ventures in punk and hard rock territories without ever getting poppy. Simply rad!

2. ALL THEM WITCHES « Nothing as the Ideal » (New West Records)

Another anticipated album. So how the trio formula sounds in 2020? To me, it’s a success. Instead of losing their bearings, the Nashville unit delivers a record that is far more psychedelic and hard-hitting than their most recent releases, also injecting an unexpected 70s stoner rock twist while guitars obviously take advantage of the absence of keys. A must-have!

This one is both one of my biggest highlights and discoveries of 2020; an outstanding band who offered an album with a strong artistic personality that takes no prisoner. You love it or hate it, in any case the Brits deliver a stellar album, one that could redefine their entire discography!

There had to be a punk record on that list. They had us waiting for seven years since ‘Hell Comes To Your Heart’ was released, and hell this new one doesn’t disappoint. Burly, fun-laden, inspired, gritty: ‘Fuck It’ isn’t short of qualities and charm. You may lack a few anthems overall, but it still remains a top-notch delivery from Nick and his gang.

I’ve always been into The Atomic Bitchwax’s free-wheel, technical and off-the-wall rock’n’roll, and although ’Scorpio’ didn’t strike me when it first came out, it finally reached the top of my 2020 faves. The recipe is plain and simple, with new member Garett Sweeny on guitar and vocals sounding amazing. You’re craving some good fun? This album is for you.