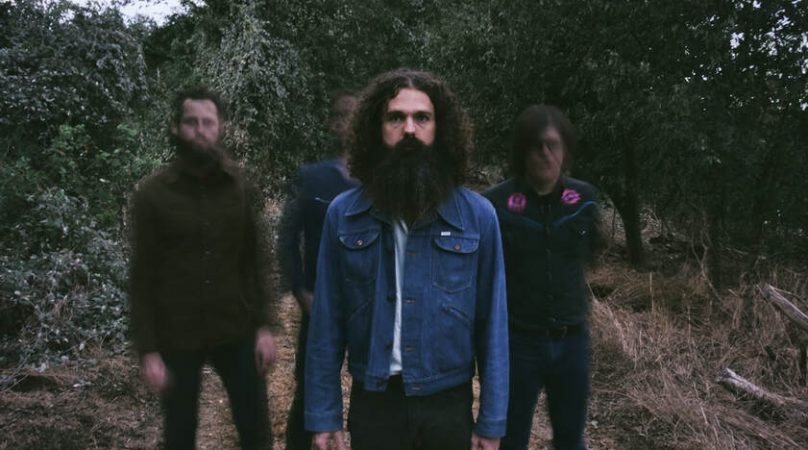 This March, right before the world went into hiatus, LORD BUFFALO released their eerie new album “Tohu Wa Bohu”, unintentionally foretelling the chaos we were about to face. This strong, resonant record plunges you into the arid and desolated landscapes of the American South and its mesas — a geographical and soul-search inducing music, a shamanic journey that is testament to their experiences from another time, another world barely accessible to simple mortals. Just as captivating as he is knowledgeable, the foursome’s preacher/crooner Daniel Pruitt told us about some very personal experiences and managed to unveil the beauty in all that tumult. We made the most of lockdown to discuss one of the greatest surprises of early 2020, the world as it has become, artistic motivations and creative purposes. Or more simply, just music.

For starters, could you provide a brief history of your personal background as musicians, and as a band?

Daniel Pruitt (vocals): I grew up in a musical house, my mom teaches piano and my dad plays the trombone. I sang in a boys choir in elementary school, started teaching myself guitar around twelve and by fifteen was playing guitar and bass in church. In junior high I started playing in garage bands with friends. I became obsessed, I spent all of my time playing and writing music. In high school and college I played in some bands with Garrett Hellman and after graduating we moved to Austin, TX. Lord Buffalo formed around 2012 when Garrett and I began to collaborate with Patrick Patterson on violin. We worked with different drummers and played some shows as a three piece. We played as much as we could, recorded several EP’s, went through a few lineup changes, booked our own tours, made our own merch and hustled. Yamal Said joined on drums around the time we were putting together our first LP. The four of us keep pushing forward.

Austin appears as a maverick oasis in a very conservative region. Do you feed on this creative ground?

DP: Yes, we do.  Austin is certainly an island in Texas. The city has some hard working musicians, club owners and non-profits who keep the flame of music and art alive even as the cost of living becomes more prohibitive. There are a lot of bands and clubs to play, which can be a double-edged sword. I think the ubiquity of live music numbs Austinites to the ritual, and the long list of bands may be what keeps the show payouts lower than most cities. At the same time, Austin provides a space to refine your craft, play out as much as you want, test new ideas, see a lot of different kinds of music and learn what works and what doesn’t from seeing other bands perform. These are all critical to the pursuit of making music.

The city is also known for being one of the cradles of psychedelia, with The 13th Floor Elevators as one of its torchbearers. You had the chance to share the stage with Roky Erickson, and also brilliantly covered “Two Headed Dog” in your “Castle Tapes EP”. Was he an influence?

DP: I love that song. Roky and the 13th Floor Elevators are a big influence and part of my attraction to the city. As someone who came to rock and psych from a more folk-based background, their music has always made a lot of sense to me. Their seemingly effortless blend of the archaic with the strange and new is something I’d like to accomplish.

“Writing songs is a kind of mythmaking. The creation of another world, not of you or about you, but by you and, at the root, for you.”

Lord Buffalo’s brand of psychedelia is more like some kind of enlightenment, an invitation to introspect and question our existences. ‘Tohu Wa Bohu’ isn’t short on religious references: “Raziel”, “Kenosis” — which also refers back to the concept of “tohu wa bohu” — or on “Halle Berry”, when we want to follow you and sing “Hallelujah!”…

DP: Yes, I think this record is flirting with that kind of introspection. Writing songs is a kind of mythmaking. The creation of another world, not of you or about you, but by you and, at the root, for you. I do think there is a religious subtext to the world these songs live in. Judeo-Christian mythology is the backbone of the culture I grew up in, the angel I wrestle with. That older, larger mythology can act as a reference, a scaffolding for the world we’re trying to create.

DP: Place is powerful. As humans we interacted with places long before we developed language or tools or concepts of ownership and possession. Places influenced our ideas of the sacred and probably shaped the formation of religious ideas. When we engage with place we tap into some older area of our thinking, one that feels larger and more impressionistic than most of our day to day cognizance. It is a way of experiencing that seems both acute and clouded, recognizing the minutiae through our senses without analyzing the information by processing it through language. This sort of experience is what I look for in music and writing and art. When I encounter this largeness I’m gone. I’m lost. Even when I’m quarantined in a tiny apartment in Oklahoma City.

“We released the album straight into the arms of a pandemic. I heard the songs again, but in a new way. The world had changed. These songs were from before. We are somewhere else. Probably someone else.”

You said you were not aware of the form these songs would take and their importance, at the time they were recorded. As if you recorded them in a different American era; “old hymns for a new West”. Isn’t it the best definition of this songbook? Neil Young’s work on the “Dead Man” soundtrack instantly comes to mind.

DP: Yeah, when we went into the studio to make ‘Tohu Wa Bohu’, these songs were not finished. We decided we wanted to try to capture some of the discovery involved in making a record. We also needed to give ourselves that hard deadline to see what would happen, what sort of decisions we would make under the gun. When you make a record in this way (or any way, really) it takes some time to understand what the record is reaching for. I didn’t listen to the record much after we made it, and over a year went by. When the time finally came, we released it straight into the arms of a pandemic. I heard the songs again, but in a new way. The world had changed. These songs were from before. We are somewhere else. Probably someone else. Speaking of cinematographic references, Morricone and Badalamenti have been often mentioned when describing your album. Do you agree with these?

DP: As a band we’re always interested in creating musical pieces that work as a whole. I think we all enjoy listening to albums in their entirety, as a complete thought. When we start working on a record we’re aware of its shape from the very early stages, how different pieces can or should interact. Like writing the acts of a play or scenes in a movie. We just recorded five songs for a split LP (which should release this summer) that we wrote with composers like Morricone and Badalamenti very much in mind. We approached the arrangement more orchestrally, bringing instruments and themes in and out and relying less on the core of drums and bass or even rhythm guitar to pull the listener through the entire piece.

Would you be interested in writing a movie score? Some kind of contemporary western or drama like No Country for Old Men or The Three Burials of Melquiades Estrada, where the landscape appears to be one of the main characters?

DP: Yes. Absolutely. We were able to place four of our songs in the documentary film Tower about the mass shooting at the University of Texas in the 60’s. It was exciting to experience our music in that way. I would love to work on a film score. If any filmmakers are interested, hit us up. We’re ready.

“The roots of rural American music shared some of the values of the stoner and doom crowd in its rawness and largeness, written with performance at its core and a lack of expectation of any mass commercial viability. That is the music we are interested in, whatever you want to call it.“

How would you explain that your music speaks to the stoner and doom crowd so much?

DP: I think we exist in some worlds that the stoner and doom folks understand better than most. We think in terms of long-form, long-jam, play the whole fucking record and let things marinate without rushing the build. But it does build. And it gets huge at times. I think there is a zoomed out sort of communal aspect to doom, similar to epic poetry (Spoon wouldn’t write Gilgamesh, but Sleep might). I’ve always been more interested in that viewpoint, even when the voyage is internal it maintains a psychic distance that keeps it from becoming claustrophobic or confessional.

Our music approaches these elements by way of folk music, in a way, but that label can give the wrong impression. Descriptors like “roots” and “Americana” become meaningless as the bloodless imitations they usually describe trade in any attempt at a unique perspective for Starbucks marketing. I think the roots of rural American music shared some of the values of the stoner and doom crowd in its rawness and largeness, written with performance at its core and a lack of expectation of any mass commercial viability. That is the music we are interested in, whatever you want to call it.

We can imagine how frustrating it is not being able to defend your album on stage right now. How are you filling in the current isolation as artists?

DP: Yes, it’s extremely frustrating. We released this record right as everything shut down. We came back home mid-tour as the pandemic spread. There’s nothing we’d like more than to be on the road introducing TWB in the raw to the world. We’ve been blown away by the response to this record in the US and Europe and can’t wait to get back out there.  Looking forward, we’re getting ready to release a split LP with Palehorse/Palerider for an upcoming Desert Records series. We are spread out for the lockdown, but we’re exploring different musical ideas, piecing together fragments for a new record we are about to undertake. So yeah, we miss playing the live shows, but I’m interested to see how that suppressed energy channels into a new recording.

One last word for your fans?

DP: Thank you very much for your support. Stay safe and healthy and we’ll get through this mess. We hope to see you as soon as it is possible for us to tour again.