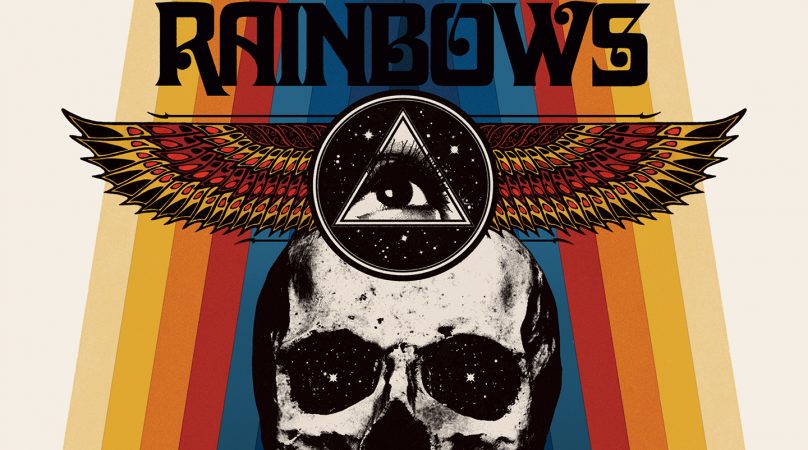 When Gabriele Fiori released BLACK RAINBOWS first album about twelve years ago, no one would have imagined that they would quickly become the independent stoner scene torchbearers, and his label Heavy Psych Sound one of the spearhead of the Italian underground.

So how come Black Rainbows have released eight albums within such a packed schedule? Fun, passion, the need to share and play live. Beyond being a simply recreational activity, this band is also Gabriele Fiori’s lab for the sound he’s been honing for years; a blend of seminal stoner rock tinged with anything but cheesy nods to the 70s, a little bit of psychedelia, occult references, for an overall tasty recipe that makes you want more and more.

But like many druids, for lack of grimoire with a detailed ingredients list, he’s been trying stuff and the outcome hasn’t always been up to the expectations. Following up four by the bye albums, 2015’s killer “Hawkdope” reached a new level yet it remained somehow too linear and straightforward. Boom, why not adding a pinch of psychedelic in the mix? “Where the hell is my acid? Dammit, I just dropped it in the cooking pot! To hell, it’d work when stoned.” According to missing witnesses, this is how “Stellar Prophecy” was born. But as one can’t be stoned 24/7, it didn’t work for everyone.

Once back from the trip, the electric wizard started a new recipe, with his green incantations opening new gates of cosmic inspiration. Stacking sharp riffs with asphalt-hot atmospheres, the Black Rainbows V8 drives at breakneck speed to the skies.“Cosmic Ritual Supertrip” happens to be THE perfect blend of fierce rhythms, trippy parts and grease-dripping sound, on top of which Gabriele’s shaman vocals constantly invite you to join the Sabbath dance.

The best of Black Rainbows was just put in a bottle to provide sheer exhilaration. Indulge and experience that “Cosmic Ritual Supertrip” now!