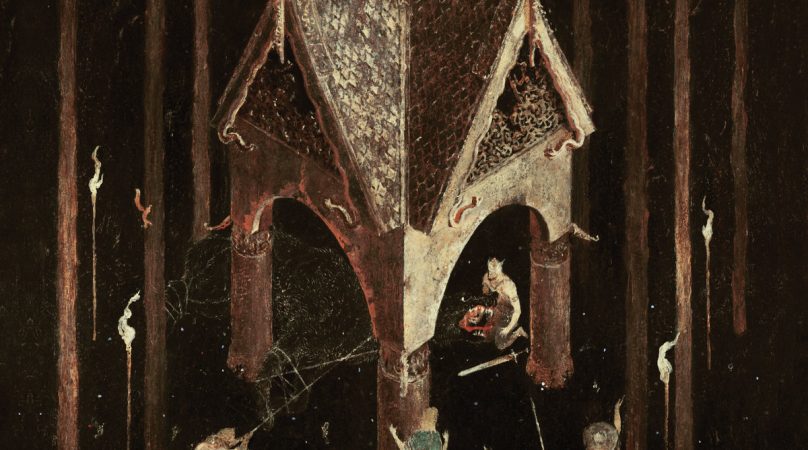 It’s always hard to weigh in on a band you’ve been into and respected for years, when the latter decides to turn a risky corner. Hard for me to judge the new album from US atmospheric black metallers WOLVES IN THE THRONE ROOM, Thrice Woven, objectively. Six years after the mind-blowing Celestial Lineage, which marked the end of a trilogy started upon their absolute masterpiece Two Hunters, time are a changin’.

Once again, the Weaver brothers had the finest names on board to help deliver something new, massive and sophisticated, with producer Randall Dunn (Earth, Boris, Sunn O)))) at the helm, and guests such as Anna von Hausswolff and Steve Von Till, plus a stunning artwork made by Denis Forkas (Behemoth, Kruger) and designed by Metastazis (Blut Aus Nord, Paradise Lost, Alcest)… And the sound, what about the sound?

Opening track “Born From the Serpent’s Eye” instantly drags us into the Wolves’ world, its smooth acoustic sounds quickly making way for a wall of riffs and blast beats, blended with undershot – but not cheesy –keyboards and the band’s trademark aerial melodies. Yet, the production on this new album is dramatically different. Everything sounds more… accessible. Especially when, by the end of the track, you’d swear an average Norwegian black metal band is playing. And yet. A sheer silence. Anna von Hausswolff’s vocals start creeping in, slowly joined by a female choir. A sudden change in the shape of a slow, trippy and majestic ensemble that takes us onto the Olympic Mountains. The honor is intact.

Picture this: Steve von Till’s barytone voice on top of an acoustic guitar, a campfire crackling somewhere in the woods, under a silent, starry night sky. “The Old Ones Are With Us” is a celestial ode to the spirits who haunt these mountains, and this time they are invoked by a male choir announcing that winter has come to an end. There’s some sort of pagan black metal feeling here, when synths get added to a procession of crawling, golgothean and oneiric riffs. Again, the Wolves’ identity remains intact, and I still haven’t figured how.

Now is the time to enter “Angrboda”. This song deals with Northern mythology, telling tales of the ice giant woman, spouse of Loki and mother of wolf Fenrir – an uncanny choice from a US band who’s usually thousand miles from such thematics. Then, “Fires Roar In The Palace of the Moon” takes us to the end of our journey, through a brutal and sulfur-drenched track that contains various atmospheric parts, taking up the band’s self-proclaimed “Cascadian black metal” again.

In the end, I feel mixed about this record. Everything in there sounds much more easier-sounding and accessible, which is probably due to the band’s growing popularity and countless tours and festivals appearances since the last record. Something in their approach has changed, not only on stage – they went from three to five members – but also in the studio. A mutation is occurring, and despite their undeniable savoir-faire, the band doesn’t convey this cold, spiritual, breathtaking but also more sincere depiction of the North American wilderness of theirs anymore. Above all, the album length is what frustrates me the most: only three-quarters of an hour, you barely get into the record and it’s already over. However, Thrice Woven remains an exquisite album that is definitely worth the listening, so much as to unveil its new traits and this new leaf the band has turnt over. More poetic and serene, also more experimental, WITTR manage to remain just as awesome and bestial.