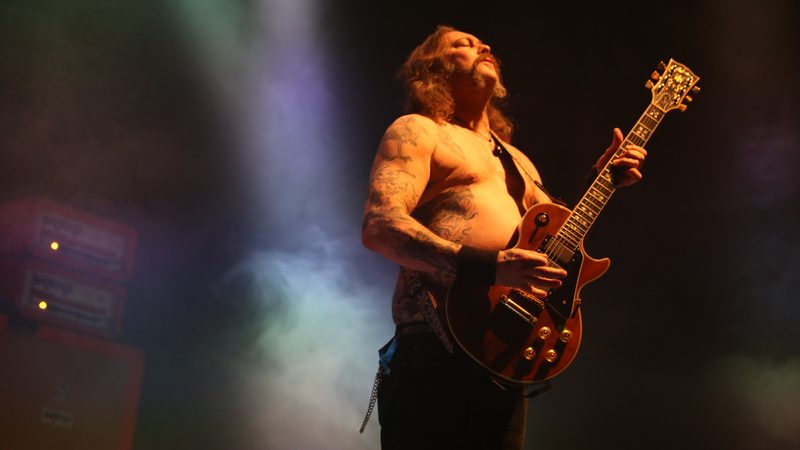 After a few warm-up beverages in an establishment that may or may not have a name that rhymes with “Slewbog”, I discover to my dismay that it’s one-in-one-out even by the time I get to the Black Heart for the first riff of that last day at DESERTFEST LONDON, with Wizard Fight. That said though their tar-infused and overtly riffy hymns still reign supreme through the walls as I cower from their guttural roars and groove-licked sludge in the upstairs bogs for a few minutes before I head back over to the Underworld for a spot of Hark…

A good chunk of us need some serious cobwebs blown off our cloudy craniums and the Welsh riff wizards’ mighty entrance into London’s darkest musical dungeon seems like just the tonic. Led by the talented and charismatic Jimbob Isaac, the now four-piece hammer into a set of sludgy, metallic anthems with more gusto than a whale leaping into a school of plankton. Those fond memories of Taint’s past glories may continue to follow Hark around for some time yet to come but Jimbob’s new tribe are an altogether more aggressive, angular, dynamic and sophisticated entity. As this afternoon’s blistering set featuring a boatload of material from the new album Machinations proves, they’ll be rising high up the festival billings in the months and years to come with devastation such as this sending the Underworld into ecstasy.

Right, it’s time for New Venue O’Clock! It may be far grander and cleaner than the dank confines we’ve become used to for our usual Desertfest haunts and not to mention a considerably longer walk up Camden High Street, but by Christ THANK YOU Reece Tee and Jake Farey for upgrading us Desertfesters to the luxurious confines of the 3,000 person capacity Roundhouse. This incredible room is simply perfect: beautifully formed, well-staffed and as loud as a power surge at the Marshall factory. Oh yeah, and it’s sold out to boot! 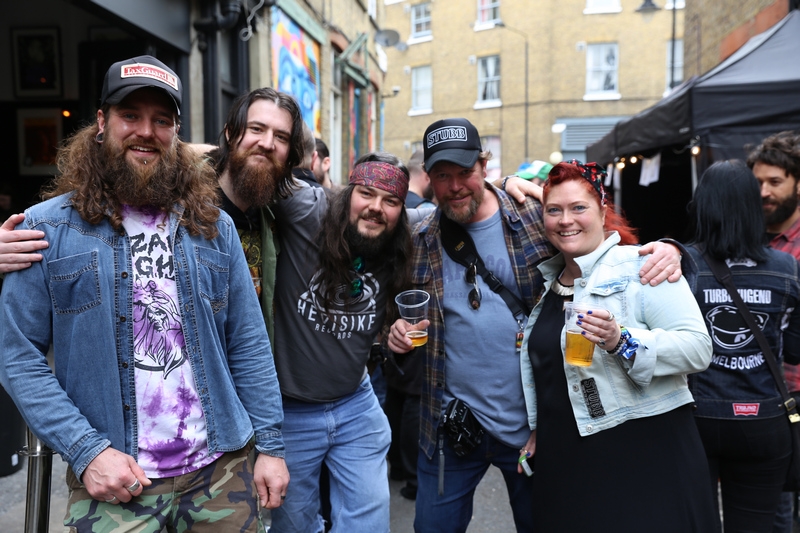 After making ourselves comfortable, we’ve got a serious spliffage for the riffage and who better than to smoke us long into the afternoon than Wisconsin’s mighty BONGZILLA, fresh from their headlining role at The Underworld last night. Whether it’s one biffta too many or a complex onstage set-up it does certainly take a couple of songs for the ‘Zilla to really get going. But once those sludge-kicking riffs and Magma’s concrete kit-work really crank up on the Roundhouse’s PA then the venue becomes a green-lit, infested melting pot of pure underground filth. This is not complex metal music, but the key to the outrageous authority Bongzilla laud is in the delivery and conviction of those groove-mastering riffs and Muleboy’s bile-crusted vocals. High AND on fire? Oh. God. Yes. Ending up a bone-juddering 30 minutes in this colossal palace of sound with (what else?) a jaw-dropping dirge through ‘HP Keefmaker’, Bongzilla leave the hall in serious danger of renaming the venue “The Flattenedhouse”. 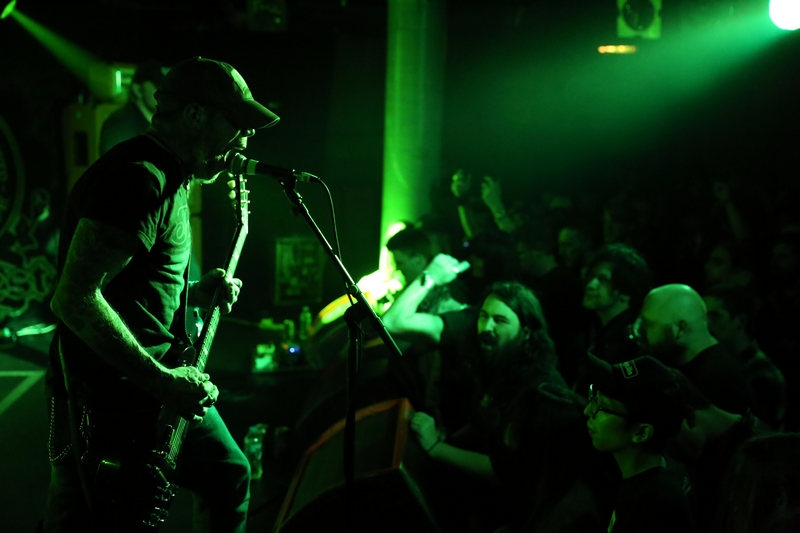 SAINT VITUS may well continue to command a mighty reputation in the doom community but now apparently down to just one founder member of that classic line-up in guitarist Dave Chandler, I’m sorry to say that tonight, for me at least, it begins to show. Henry Vasquez is a great drummer and thoroughly entertaining in everything he does but tonight he’s perhaps simply too hard-hitting to let the rest of the band show their hand. Along with Down/Goatwhore bassist Pat Bruders’ growingly metallic crunch, it feels like there’s very little of the flowing broodiness of the Wino-led line-up. Making little audible sense from the stage as he cackles behind the mic, Chandler is either too old or too fucked to lead the band alone although his howitzer guitar work remains as stellar, tightly varied and unique as ever. Scott Reagers seems to be loving life back on lead vocals, but his throat rarely hits the mark and his between-song banter is Grandpa-worthy at best. They do still have the songs in the likes of ‘Saint Vitus’, ‘Born too Late’ and ‘War is Our Destiny’ but the sound quality and general band coordination today is poor throughout. Though I do see there’s plenty of punked-up heshers enjoying it and forming multiple pits, so maybe I’m in the minority in my grumpiness!

WOLVES IN THE THRONE ROOM cook up their usual brand of organic, lo-fi, transcendental black metal next back in the Roundhouse with the Weaver brothers joined by an additional guitar, bass and some trippy keys in an atmospheric performance that uses all the acoustics of this great venue to perfection. Scorching material from ‘Black Cascade’ and ‘Celestial Lineage’ sound incredible with Nick’s gigantic drums underpinning everything but I do feel that an earlier slot in the day for these rampant, blackened Wolves might have helped to keep some of the more good time vibes a-goin’ strong from the more groove-laden, traditional doom monsters of the day. 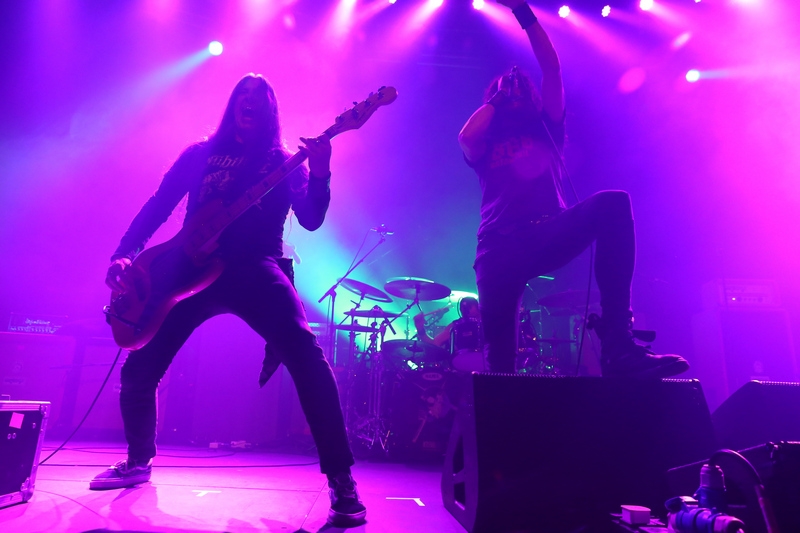 The as-ever enigmatic Swedes CANDLEMASS are having a blast of a bombast on the Roundhouse stage as Leif Edling and Mats Levén lead them through a blitzkrieg of operatic doom anthems. ‘Bewitched’? Yep, we all are just a bit! Candlemass, you get the immediate impression, are genuinely one of the few bands who can rock this stage to its full potential tonight and the crowd bays to their every mighty riff. But the best is STILL yet to come…

SLEEP baby! It. Is. ON! Pike. Cisneros. Roeder. The Trinity of Three. Kicking off with ‘Holy Mountain’s volume-defining introduction creates simply total devastation from the get-go with Pike and Cisneros surrounded by more backbone in their backline than a family of giraffes. Beach balls bounce around the huge hall as banger after banger rip through the air. ‘The Clarity’, ‘Dragonaut’, ‘Aquarian’, ‘From Beyond’, they’re all here and they all carry all the mystique of that first time you first pricked up your ears toward these titans of sound, yet its’s fifty times more crushing on such a gigantic scale of performance. Once again with Sleep, this is a Desertfest-defining moment for us all. 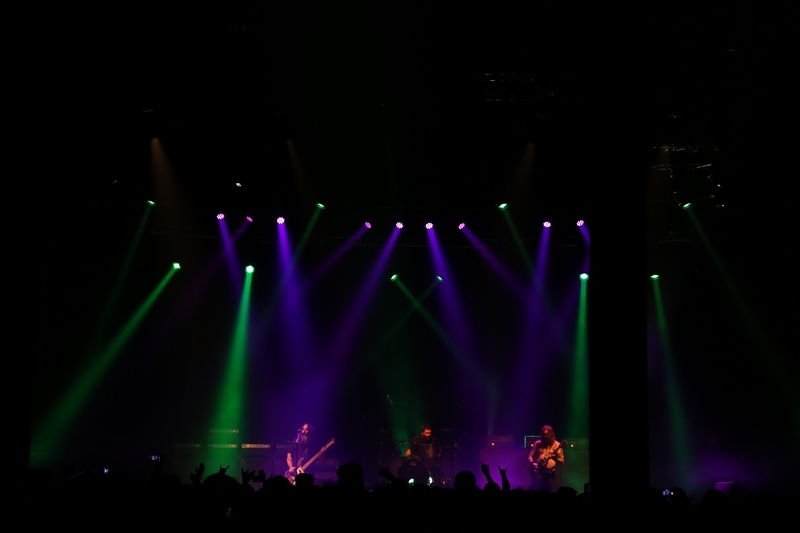 It’s a long trek back through Camden but for five hundred or so of us it’s 1000% worth it to catch German psyche rock masters SAMSARA BLUES EXPERIMENT at their frenetic best. Christian Peters and Hans Bob are on top form as the trio meanders through sweet, esoteric jams and full-on bombastic planes alike with their sweeping brand of sand-dune-piling rock. 20-minute songs are perhaps not what completely we’re after at this time of night with the sleepiness (every pun intended) of a 3-day rout setting in, but SBE’s inter-worldly rhythms do set the Underworld alight into a head-nodding frenzy as firsts pump and booties shake to their sophisticated and well-polished bluesy grooves. What a great way to end this 2017 spectacular – some of the finest psyche-desert rock right here, right now. 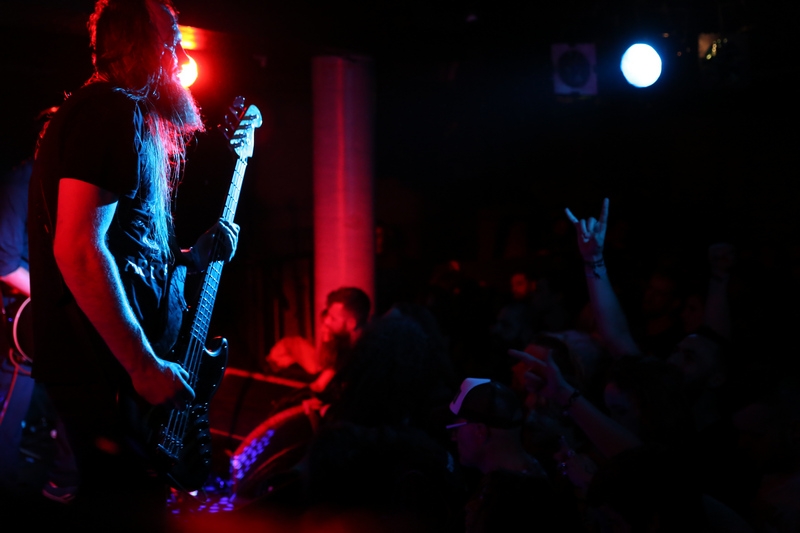 As we blast off into the night one last time, it’s hard to argue that this sixth edition of Desertfest wasn’t one of the best yet. The feeling is near unanimous that The Roundhouse is infinitely better as a final destination than the Koko has been and the genuine love between bands, fans and organisers shows no real sign of waning even as the festival’s capacity, diversity and appeal expands beyond where many thought it would ever belong.

Beers, riffs, pies n mash, friends: what more could you need in life? We slink back off to our various lairs in the capital, eager to dream of what delights 2018 will have in its stoner store. Same time next year? You better believe it…

Read about the Friday and Saturday