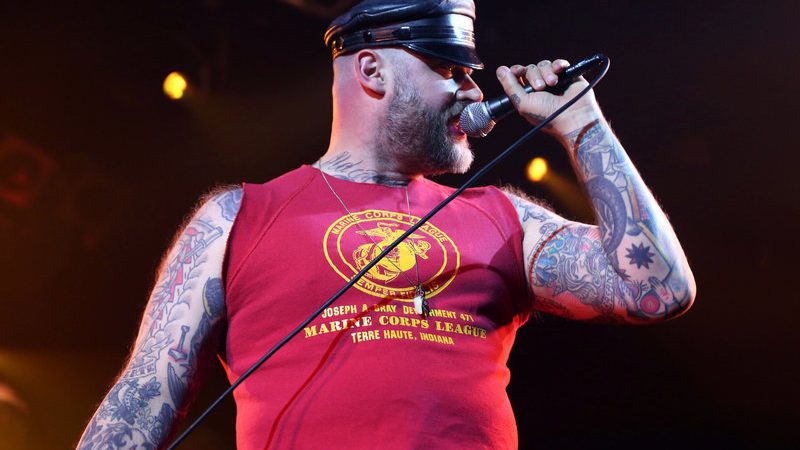 Where’s my hangover? Hmmm, it hasn’t hit me yet. Maybe it will later, let’s see. Coffee? Coffee. Fry-up? Now we’re talking. We’ve got to have something to keep that late morning pint of Camden Pale in good company now haven’t we? Though I have to say whichever genius booked that luxury pie n’ mash van to sit outside the Black Heart in Greenland Place all DESERTFEST LONDON weekend made me a very happy person indeed last night! Oh, there’s bands on? Right, we’d better get on that… (PHOTOS: Gloomy Lights Photo)

Oodlings and noodlings of classic rock kick us off at the Ballroom with the Groundhogs. I must admit, I’m not sure how many line-up iterations this band have been through over the past 400 years, or indeed if this is actually the GROUNDHOGS at all. But there’s Ken Pustelnik behind the kit playing away like a demented Saruman, so I guess it must have some kind of official stamp of approval from someone somewhere. I unfortunately don’t catch much of these great players, who have good taste in naming their band in reference to one of my favourite Bill Murray films, but ‘Eccentric Man’ goes down an absolute treat and sets my neck a-twitchin’. Albeit the Groundhogs set is really just a brief look around the door on my part, this seems a stellar performance from the aging bunch of Londoners as they plough their good-time vibes onwards to a decent-sized crowd of both appreciative diehards and newcomers alike. 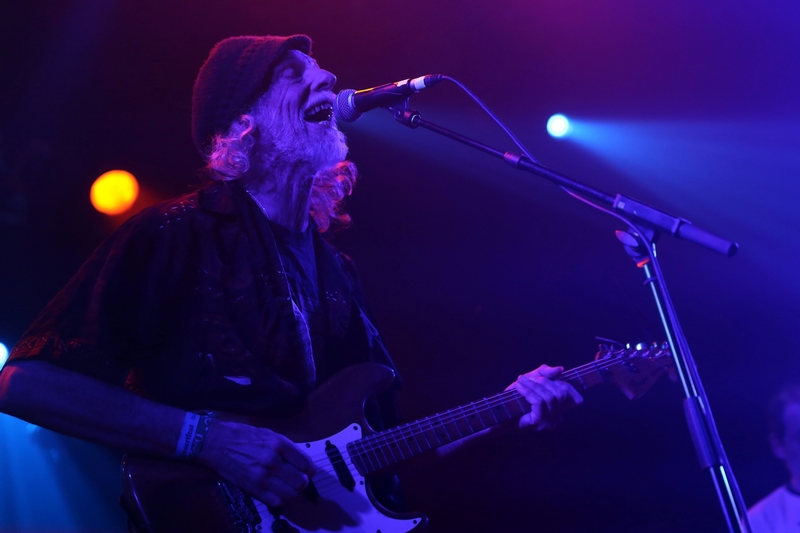 It’s a shame to leave right as ‘Cherry Red’, one of my all-time favourite rock songs, kicks off but it’s an essential move in order to soak up the sumptuous doom that Californian trio BRUME have brought us from all the way across that big blue pond. Ex-Gurt living legend Jamie McCathie’s sweeping and expansive riffs a la Yob and Windhand’s harrowing plunder kick on hard across the venue as bassist Susie McClellan’s vocals ring out like a siren across the Underworld’s blackened expanses. Progressive, enchanting, otherworldly and gut-punchingly heavy, Brume set a tone that the next day-and-a-half days will struggle to muster back up for sheer dominance of sound alone.

Don’t get me wrong, it is VERY, VERY cool to see former Kyuss and QOTSA sticksman Alfredo Hernandez back behind the kit and doing what he loves on stage at the Ballroom in front of a few hundred dedicated punters. But, I have to concede that his West Coast-based band AVON’s brand of stoner rock is generic 1-0-1 to say the least and it’s not a particularly inspiring session on stage over at the Ballroom. Its only when a cover of, yes, THAT QOTSA classic ‘Avon’ breaks through that heads begin a-nodding in mild recognition. With another cover of early QOTSA B-side ‘The Bronze’ also making an airing, albeit with some badly-pitched vocals, it’s unclear to me as to whether this is just a set designed to give the mules in this festival crowd what they want to hear, or just a band with very few of their own ideas.

On a related note, how about QOTSA for Desertfest next year? It’s about time isn’t it really? We await your call Mr Homme. Oh, and bring that Van Leeuwen chap along with you, he wears a cracking suit. 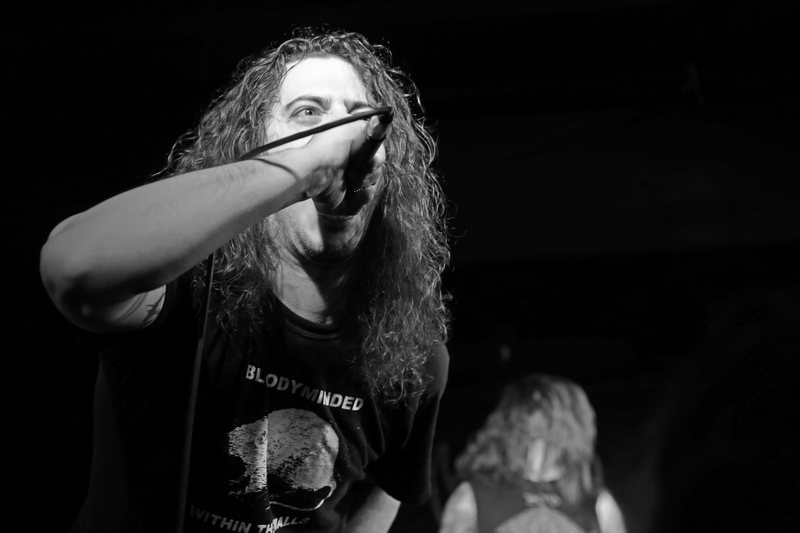 After a swift stop to refuel the beer tanks, the crowds are gathering at the Underworld en masse for US heavyweights INTER ARMA. Tensions grow like vines up the sweaty walls as the blank stage beckons forward this five-headed, genre-colliding goliath. Kicking off with the brutal death metal assault of ‘Archer in the Emptiness’, the Richmond, Virginia powerhouse is on true form tonight, mashing together sounds and sonics with textures and interplays that very few would think to place together on one album, let alone one song. The transcendental and yet explosive rifforama of ‘Transfiguration’ shows off vocalist Mike Paparo’s devastating, yet enchanting lungs which must surely win some kind of award for the most intimidatingly gutteral throat action over the course of the weekend. Climaxing with the blissful, humidly lumbering prog of ‘The Summer Drones’, there’s a sense of effortless guile that only drummer TJ Childers can summon from his core of doom. Like a prog rock band trapped forever in a brutal black metal band’s bodies, Inter Arma are on devastating form tonight.

Over at the Ballroom JOHN GARCIA is rocking all the hits and none of the shits, leading out with his solo album band locked in behind him. Newer songs like ‘5000 Miles’ sit sweetly alongside triumphant Kyuss classics like ‘El Rodeo’ and ‘One Inch Man’ and even a cheeky bit of Hermano is thrown in for good measure via the likes of ‘Kentucky’. Garcia seems a freer, more charismatic, more reinvigorated man than the night before, interacting with the crowd on multiple occasions and praising the organisation behind such a fantastic weekend of live music, before sending the room into thrashing, stoner rock rapture with heroic versions of ‘Gardenia’ and ‘Green Machine’. Why they didn’t choose what’s effectively Garcia Plays Kyuss And Hermano set over Slo Burn to headline the Friday night will forever remain a mystery to me as most of us here are having the times of our deserted lives right now. 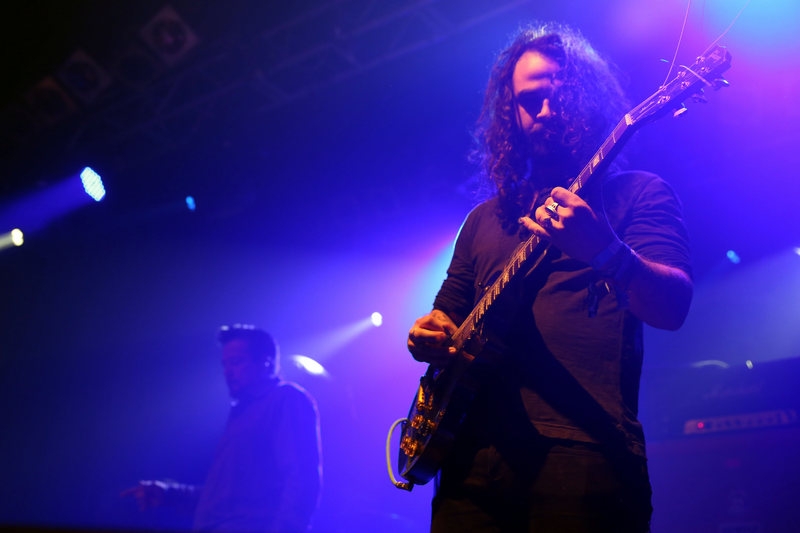 A few question marks were voiced by many around the choice of Saturday night headliners this year, but then that’s Desertfest for you and over the years the more mainstream likes of Kvelertak and Russian Circles have taken to the second night central spot with amazing reactions each time. But even those who bemoaned the likes of a Candlemass or a Pentagram not leading proceedings tonight, must concede as TURBONEGRO stride confidently onto the Ballroom’s great stage and launch warmly into new single ‘Hot for Nietzsche’ that this will surely go down in history as one of the most memorable hours in Desertfest history. The sailor hats are there, the lipstick is on, the double denim is out, the musicianship is outrageously strong and yes Tony Sylvester is wham-bam on the homoerotic form of his life as the gathered masses of Turbojugend jackets go ape as is their mandate.

‘Don’t Say Motherfucker, Motherfucker’, ‘Are You Ready (for Some Darkness)’, ‘Blow Me (Like the Wind)’, the hits just simply flow like that chocolate river at Willy Wonka’s gaff. This is for me, perhaps the greatest, greatest hits show in the world right now as Tony leads Euroboy, Happy Tom, Rune Rebellion and the rest of the gang on a romp through the finest deathpunk back catalogue on the planet. Is this the campest band in Desertfest history? The most fun band in Desertfest history? Is this euphoria on another level? Oh yes! 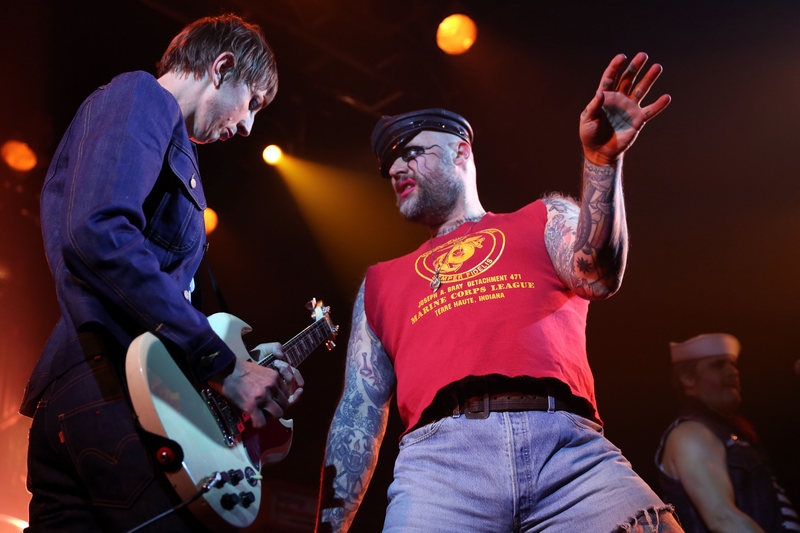 A riotous ‘City of Satan’ is rightly dedicated to Camden as beers fly, arms are pumped and grown men and women weep with joy. Completing the journey with the likes of ‘Dude Without a Face’, ‘Sell Your Body (to the Night)’, ‘Wasted Again’, is just not enough for a ravenous Camden Turbocrowd who demand an encore which comes loaded the barnstorming ‘Age of Pamparius’ and a Sylvester-instigated full-on “Wall of Deathpunk” for, what else, ‘I Got Erection’.

As we all scramble for the exit, the “whoahh-oohh-ooohhh”s can be heard loud and proud in the streets as this throng of Turbo Lovers all disappear off into the darkness in search of one last beer.