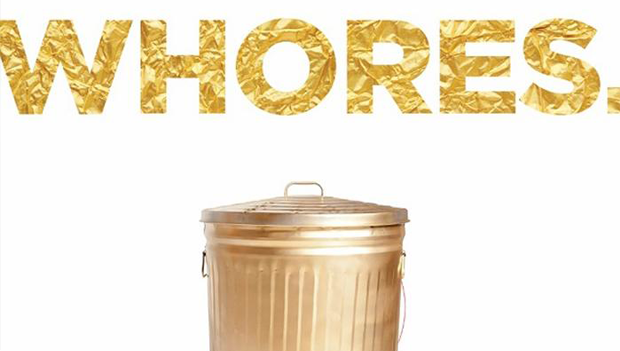 Listen up, folks: we got something huge for you. The band with the most SEO-friendly name ever, WHORES, just released their debut album Gold. With this heavy bomb, Atlanta’s hardest-hitting noise trio is getting things straight, sending deserters back in the pit and syncing all watches at fight o’clock. This lovechild of The Melvins, Helmet and Ken Mode is presently beating up every goddamn kid in the sandbox, so beware, and crank the volume up.

But before going any further, let’s talk background. WHORES release their first EP Ruiner (recorded by Harvey Milk’s drummer) on Brutal Panda Records in 2011, which is quickly followed by the Clean EP in 2013, a corrosive 6-track produced by none but Ryan Boesch (Melvins, Fu Manchu, Helmet, Foo Fighters). Now what about a split with Portland’s nutters Rabbits? And while they’re at it, why wouldn’t they also put out a filthy cover of The Cure’s “Jumping Someone Else’s Train“? In the meantime, the guys are seen on the road with the likes of Torche, Red Fang, Kylesa, Fight Amp, The Atlas Moth. Icing on the cake – this one is for you, THC readers – they also counted Weedeater’s drummer Travis Owen in their ranks (succeeded by Donnie Adkinson in 2014).

Now let’s get back to Gold. “Playing Poor” kicks off on a fuzz-laden bass line, for what is about to be the best summary possible of the band’s fire-driven style. WHORES are systematically labeled as “noise rock”, but don’t get me wrong: we’re talking about a band who perpetuates the Amrep Records legacy with faith, force and in style. This noise punk behemoth dripping with fuzz is about to drive you crazy as f-, people.

Second track “Baby Teeth” is already on, and I can’t help thinking of early Clutch, when they were more into that hardcore rock breed of theirs and put out atomic efforts like their first EP Pitchfork (please tell me that the amazing “Wicker” didn’t come immediately to mind). Over the album’s first listening, I also reminisce some Black Tusk and Unsane, but that’s not all.

I may have just quoted a couple of sonic affiliates here, but it doesn’t mean WHORES are one of those copycat bands… faaaar from here! Gold is intrinsically nasty, bone-grinding and nihilistic from start to finish. The trio grasps your guts with ten frantic tracks, dripping with as much fuzz and groove as you need to feel satisfied. No special treatment, everyone catches hell. Sarcastic and hilarious song titles (“Bloody Like The Day You Were Born”, “I See You Are Also Wearing A Black T-Shirt”) put the final touch to that high voltage outing, making the gang’s strong personality even more remarkable.

The faint-hearted will take this as a wanton outburst of hatred, but in the end, it is nothing but a thirty-five minute sludgy noise outlet executed by a bunch of guys who know exactly what they’re doing and where they want to take us. Ruiner, Clean, Gold… This is just the debut album, but the outcome is up to its title: fucking brilliant.