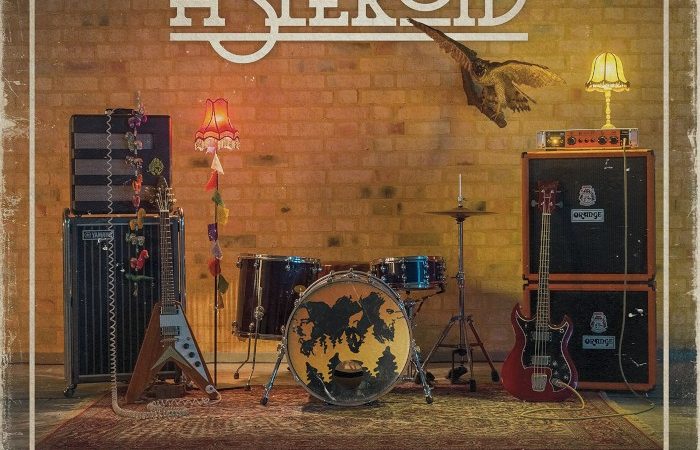 That’s the thing with space travel; take a couple of days off to hurtle around the cosmos and you can quite easily get lost up there for a few years. Örebro, Sweden’s ASTEROID have been doing just that of late, with no recorded transmissions back to earth since 2010’s ‘II’, with the exception of the two-track ‘Move the Mountain’ EP, which kept us assured the trio were still alive and well upon their humble ball of ice and rock. But now, here and now, right in the now, the bluesy threesome around back with, yep, somehow you guessed it: ‘III’.

Joining founding duo Robin Hirse (guitar/vocals) and Johannes Nilsson (bass/vocals) is new drummer Jimmi Kohlscheen, but on the strength of his debut outing, this is not the sort of effort that you’d instinctively put down as typical of a new line-up. Hirse’s solemnly resonating vocals and soaring guitar lines will always put him at the forefront of the Asteroid sound, and rightly so. But every Neil Armstrong counts for very little without a Buzz Aldrin and a Michaels Collins at his back and it’s the warm embrace of the overall sound aesthetic between the three members that wins the day for Asteroid on ‘III’.

After the slow, sleepy and homely beginning of ‘Pale Moon’ and ‘Last Days’, two tracks brimming with cackling, retro-guitar flickering and psychedelic meanderings, it’s on to the first true hulk of a fuzz riff on ‘Til’ Dawn’. Hirse steps his voice up into a coarse sermon of rigor and emphatic, rasping tones as the trio groove ‘til, errr, dawn, sounding a bit like The Vintage Caravan without the giddy happy pills.

The mid-record stomp of ‘Wolf & Snake’ sees Asteroid collide head on with the boogie-land broodiness of Kadavar or even Dozer, with those dusty bass grooves, yet triumphant rising vocal lines and Kohlscheen’s rambling yet powerful stomp marking the way behind the snare. Nilsson’s bass becomes a storm of cloudy, doom-laden menace for a couple of minutes to shroud the band in a humid wind of dense energy, before Hirse’s delicate acoustics see us gently to the shores of the Sea of Tranquility.

The jangling, near-gospel ‘Silver & Gold’ leads into ‘Them Calling’; the most compact and arguably the catchiest sing-a-long available on ‘III’ as Hirse sirens “Now I hear you calling, calling for me!” The fuzz is once again strong with this one as Nilsson and Kohlscheen combine and ramble contentedly onwards down the avenue to Bluestown together. Some part of me doesn’t feel that either the power of the rumbling bass or Hirse’s strident tones really come to life here as they perhaps would at a live show, but if this isn’t an incentive to make that happen for ourselves, then I guess nothing ever will be.

‘Mr. Strange’ is, for me at least, hands down the best jam on ‘III’. Hirse sounds like he’s literally stepped into the lunar module from the cold, distant plains of 1969 without a single care for what’s appeared musically in-between. The riff features a swaying, swaggering zephyr of a roll to match the bass-fueled rock that sits underneath. Short, sweet and not outstaying in his welcome, ‘Mr. Strange’ fades out into a psyche-laden solo of distorted, Hendrixian bliss before one final blast of Hirse’s soulful “ohhhh-ohhhh”s announce blast off and see us on our way back into the star-blessed sky.

‘III’ might not be the most exciting record you’ll hear all year, nor perhaps is it the most innovative or unique-sounding, but it’s a warm comfort blanket; a cup of cocoa, a sign that good, wholesome rhythm & blues is here to stay and that actually, it never really went away in the first place. They say Asteroids are rocky, destructive forces of nature, but this one seems to me to be far too smooth to make that metaphor work properly at all. If you’re looking for a soundtrack to a campfire, a quiet night in or an evening gazing up at the beautiful night sky, ‘III’ will be sure to hold your orbit right on course. Let’s hope it’s not another six years before Asteroid re-enter our musical atmospheres once again.