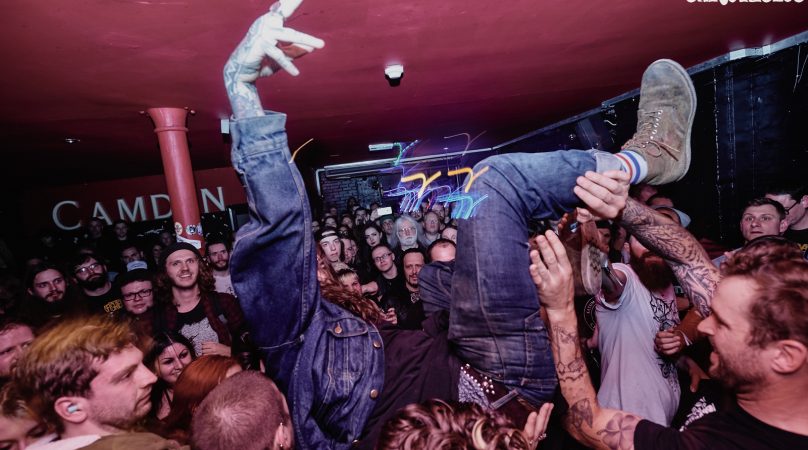 After a Friday placed under the sign of the godfathers of Heavy, US outfits have taken over our must-see list for this second day at DESERTFEST LONDON. With post-metal heavyweights like Russian Circles and Pelican at the Ballroom and a more abyssal and blackened sludge and doom lineup at the Underworld, the Desertfest offered one of its most eclectic lineups to date, with many acts that has been unseen at the festival until this fantastic 5th edition arose. And we were there to witness the madness. (PHOTOS: Gaël Mathieu & Pierre Le Ruyet / TEXT: Beeho & Mathieu Lubrun)

The sun may be high in the sky, the day has nonetheless started with a bit of anxiety, as I lost my wallet when leaving the Ballroom after C.O.C last night. Fortunately enough for me, a good soul found it and returned it to the security, who kept it aside. It goes to show that honest people exist, especially among our community. My heart is light when I walk towards the Underworld to get kicked in the ass by Leeds sludge trio BONGCAULDRON. The venue is full, in-jokes are flying on stage while I’m making my way to the pit. The band delivers that typically English brew of groove-laden and adrenergic sludge, one that feels swampy and filthy as fuck, but just as fun. Firepower reaches maximum levels and groove are overwhelmingly heavy in spite of some grind-sounding parts : the guys definitely couldn’t have found a better designation than “intoxicating party sludge” for this delightful dose of sonic muck that is even making some guys give high fives front row. Moral of the story: kicking off with a home-grown band is great, doing it with the cool chaps of BongCauldron is even better. 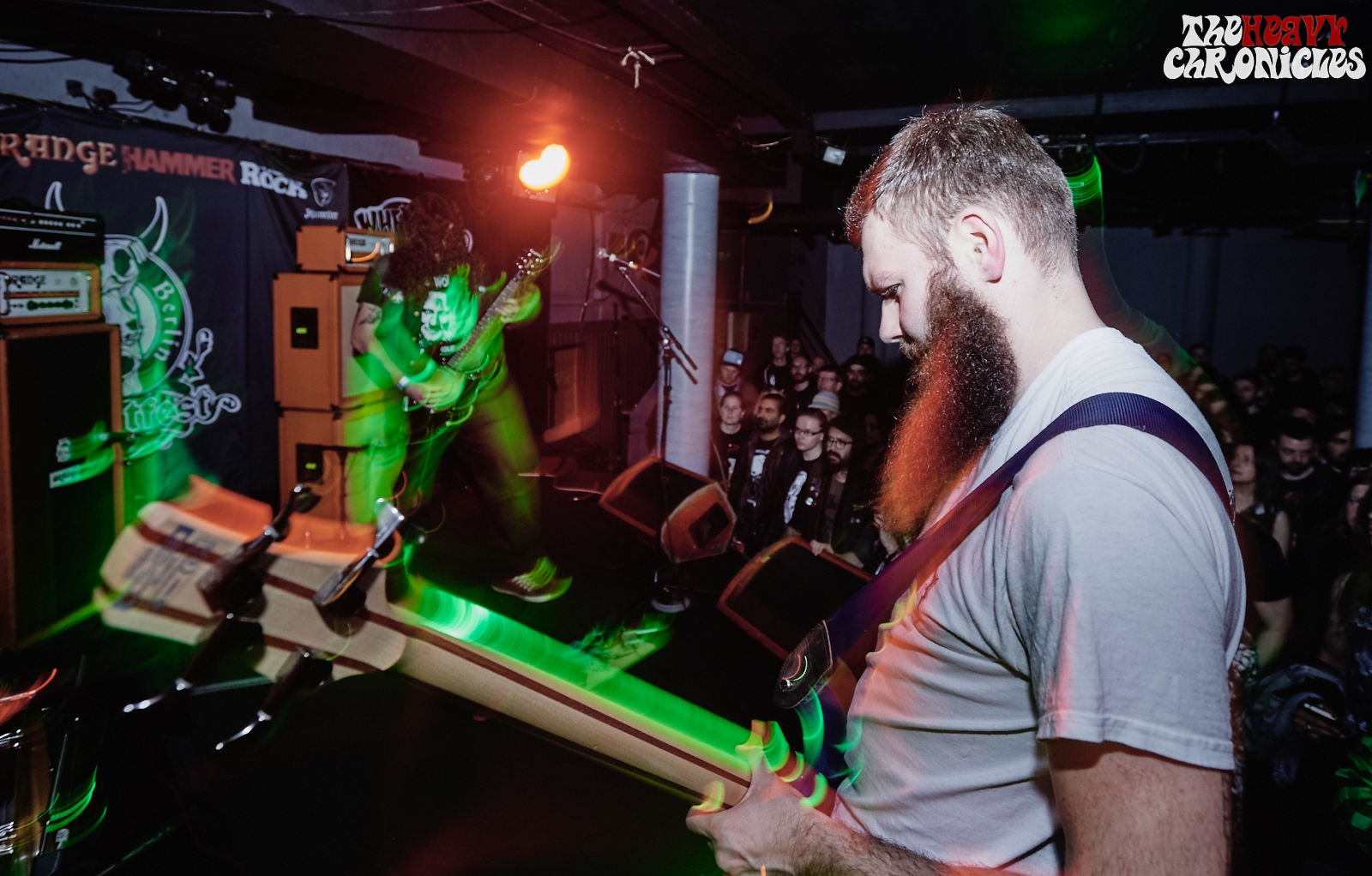 All smiles, the THC team is now merrily walking to the Ballroom for a musical u-turn, with Netherland’s krautrock six piece MONOMYTH. In a reasonably filled Ballroom, the band manages to embark the audience on a real journey with that space rock craft that could a priori feel quite unfathomable but, if you let yourself go just a bit, will make your imagination wander into outer space. This will be our only cosmic break of the day, as we unanimously picked über-heavy acts today. Comfortably sat in one of the balcony’s sofas, we’re now waiting for doom lords CONAN to tear the place down. My first Conan experience at Hellfest two years ago was ruined by a maladjusted stage sound, so I can say I was really really looking forward to today’s mega-sludge beat up (especially since the sound is top-notch in all venues). And we indeed sonically run the gauntlet, as the trio is going full throttle in front of a crowd who sure knows what they came for. As a background, a stunning 2D animated video shows a devilish titan wandering in a post-apocalyptic world, making the experience even more powerful. I think Conan just hit the bull’s eye on every level today. Boom. – Beeho 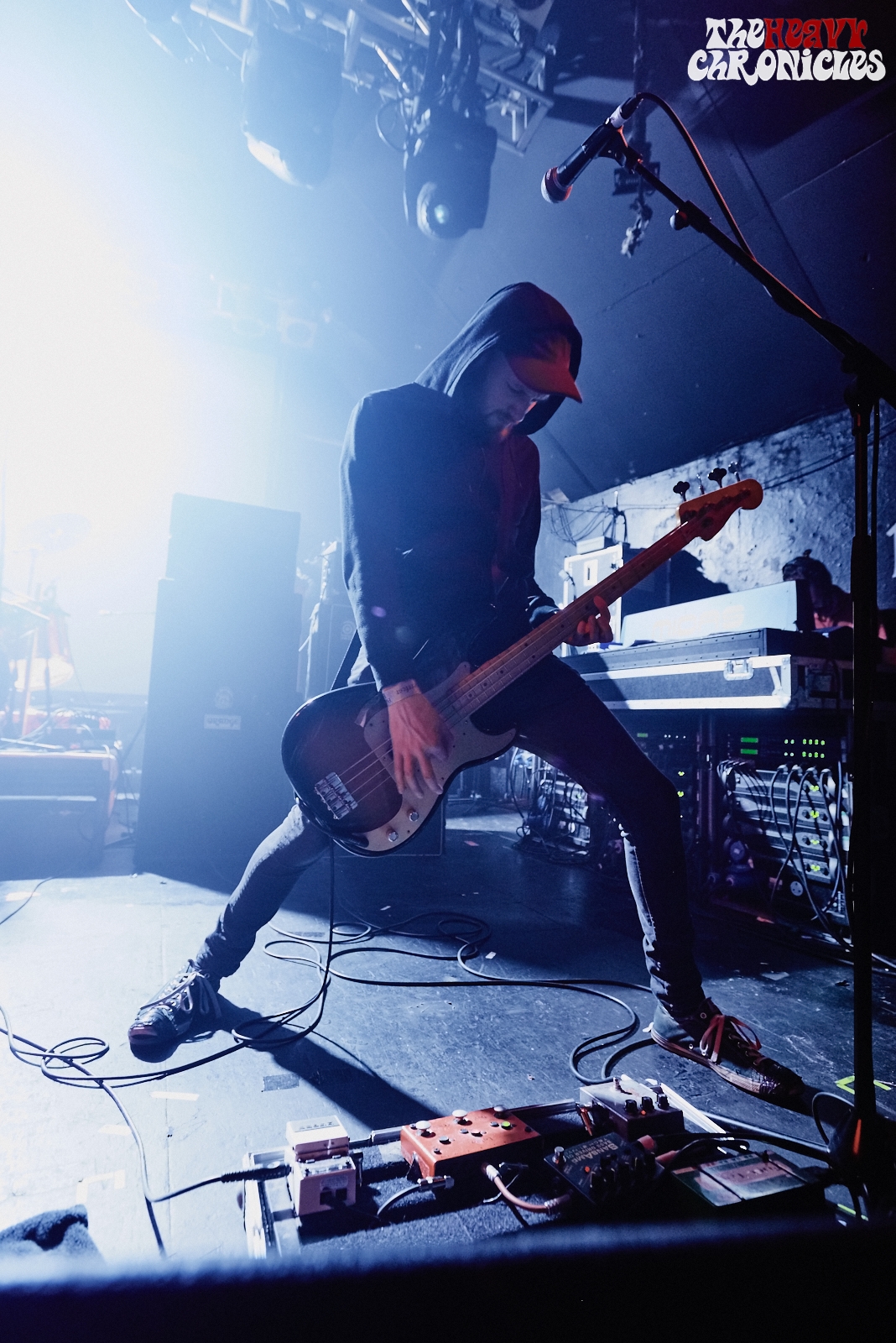 After spending most of the Friday at the Ballroom, the Underworld becomes my home away from home on this second day. The Camden venue has always been synonymous of good shows and it once again doesn’t fail to its reputation today. Now let’s kick off with Finnish sludge/black metallers FLESHPRESS: surprisingly, the room isn’t full. Black metal fans must have missed the memo that legendary drummer Mikko Aspa (Deathspell Omega, Clandestine Blaze…) is taking the stage today. The man may not be delivering “blasts” today, he is just as confident when hitting hard or fast anytime a song calls for fast paces. He is seconded by a percussionist who’s using a snare drum, a cymbal as well as a keyboard; the lineup is completed by two guitar players (including a member of Ride for Revenge, another mythical black metal band) and a bass player. All are deeply focused on their instruments, while numerous riffs come one after another to create a rather psychotic atmosphere. The band may no longer be into repetitive and cyclic music (since their last cornerstone Pillars), but they haven’t lost their sense of building up compelling atmospheres. This is just too bad they didn’t bring any merch, as I would have loved to get hold of their recent records.

Afterwards, I take a breathe of fresh air while heading to the Black Heart to catch a bit of SPIDER KITTEN. Their psychedelic rock is always a delight for the ears and their name always makes me want to meow in between songs instead of clapping hands. Back underground for Southern French funeral doom-mongers MONARCH!. The band is back in Camden after they celebrated NYE ’16 with a free show at The Unicorn. Not much has changed in their setlist but it doesn’t matter, as the band is a thrill to hear and watch as the musicians going through their material while really paying attention to each other. As a proof of this symbiosis, when the singer endured some technical issues with her mic, the whole band froze as one man without stopping the music. Grand. 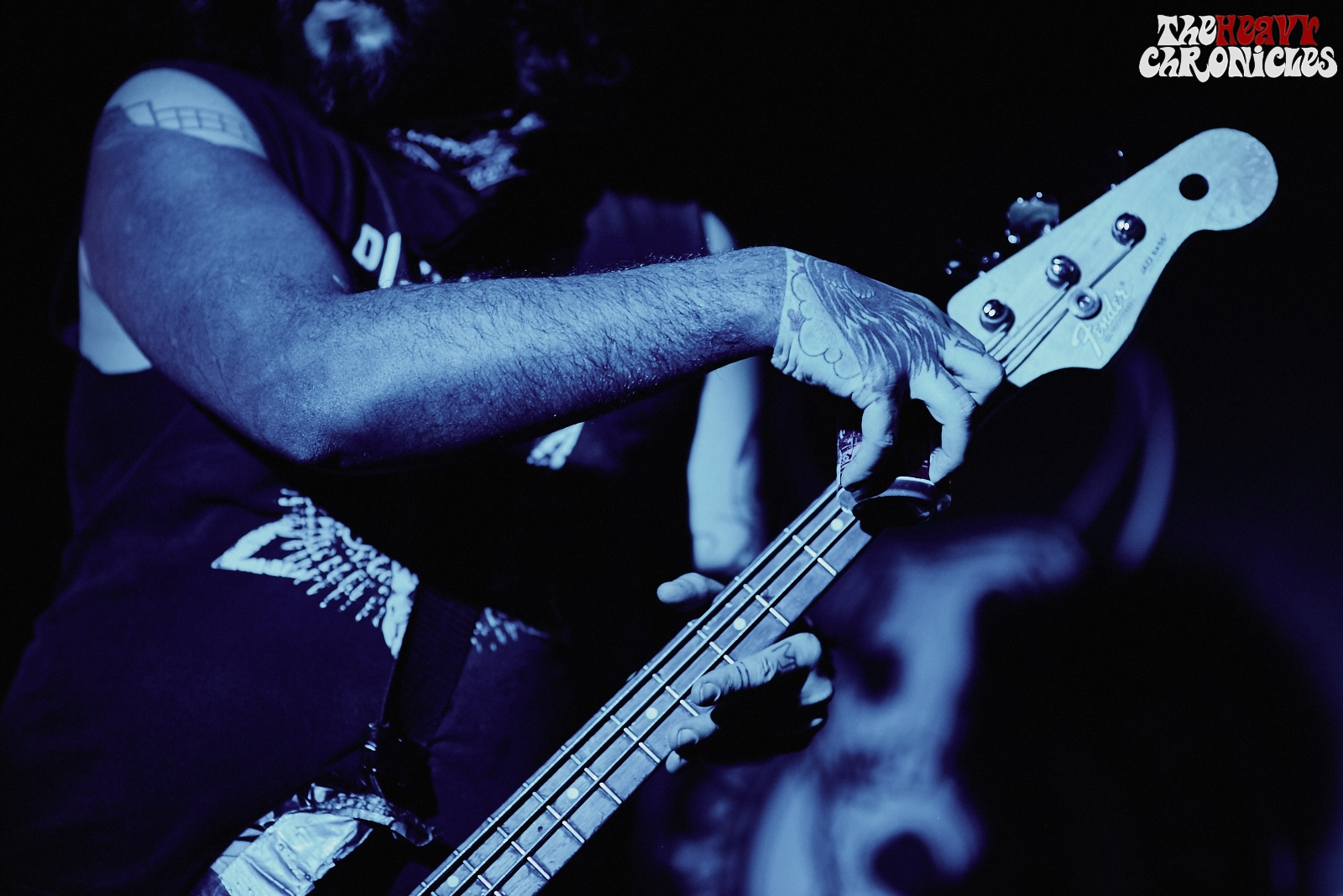 I then try my luck to attend PELICAN’s show at the Ballroom, but the queue acts as a repellant. SAMOTHRACE is my weapon of choice, and I don’t regret it as they put on a fantastic performance. They may not be on tour much, but their shows are always something that is worth experiencing. It’s also impossible for me to get used to the sight of this impressive drum kit towered by two crash cymbals, used as a propulsion tool for the band’s aerial sludge. The quintet is as much capable of hitting hard – even harder than most bands – while moving towards gorgeous cloudy melodies that sends every band trying to incorporate post-rock part into their music back to beginner’s class. Without the shadow of a doubt, Samothrace are one of the most underrated bands in this scene.

Once again I try my luck at the Electric Ballroom just to be able to say “I saw RUSSIAN CIRCLES”, but the queue is now even longer… No regrets though, because UNEARTHLY TRANCE are now coming back to life at the Underworld. The NYC outfit split in 2012 after twelve years of duty to the sludge causebut here they are, bringing their unique songs back to life. Since the beginnings, the trio has always put out quality records by creating a bridge between Burning Witch and Darkthrone, and this show just confirmed it. Since it’s a come back tour, the band digs into their discography to comfort all fans, from their last album to In The Red (my favorite) and songs like “It Is The Never And The Forever That You Fear”, “Penta(grams)” or even the great “Permanent Ice” from The Trident… A long set where Ryan Lipinsky (vocals and guitar) shines particularly. What matters is that Unearthly Trance are back in shape, sounding better than ever, and we really hope to see them again soon. After such a climax, it is due time to go home and get some rest for the very last day of the festival. – Mathieu 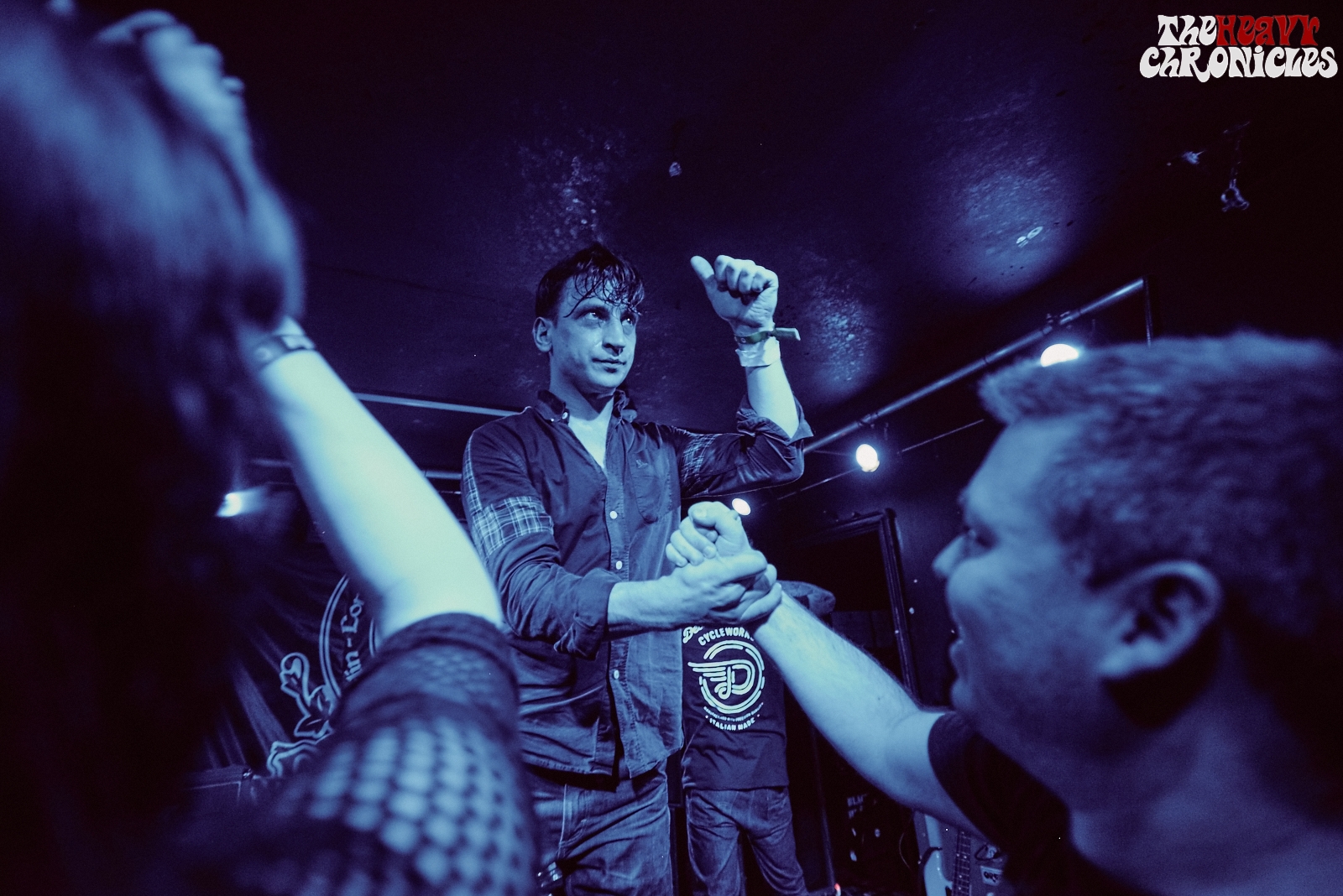 As for me, I decide to end the night at the Black Heart HQ and watch my only properly rock gig of the day with locals CRYSTAL HEAD. With a lot of class, the London trio delivers a “PalmDesert approved” fuzz-laden brand of classic rock – you can even feel some Hommesque influences in certain riffs or vocals. So when the band invites Steak’s frontman to take the mic “Perfect Weirdo“, I feel like I’m defo in the right spot. After the show, it doesn’t take long before I go back upstairs to hang about front row for one of the most awaited shows of the weekend, thanks to a massive word of mouth: MANTAR. As soon as the band starts the soundcheck – as in “hey we’re only the two of us, we play way too loud but we don’t give a fuck if the building falls down tonight” – the small Black Heart room gets rammed, after what the duo sonically assaults our earholes, brains and sanity with their power black/sludge/violence anthems, which turn out to be insane steamrollers live, as expected. Here are two unpretentious dudes whose only intention is to unleash their fury and shake our innards at the same time. The lack of space and oppressive dampness prevent most of the moshpit and crowdsurf attempts, yet the killer “Cross The Cross”/”Era Borealis” combo (taken off their even more killer new LP Ode To The Flame) quickly sets the pit on fire. 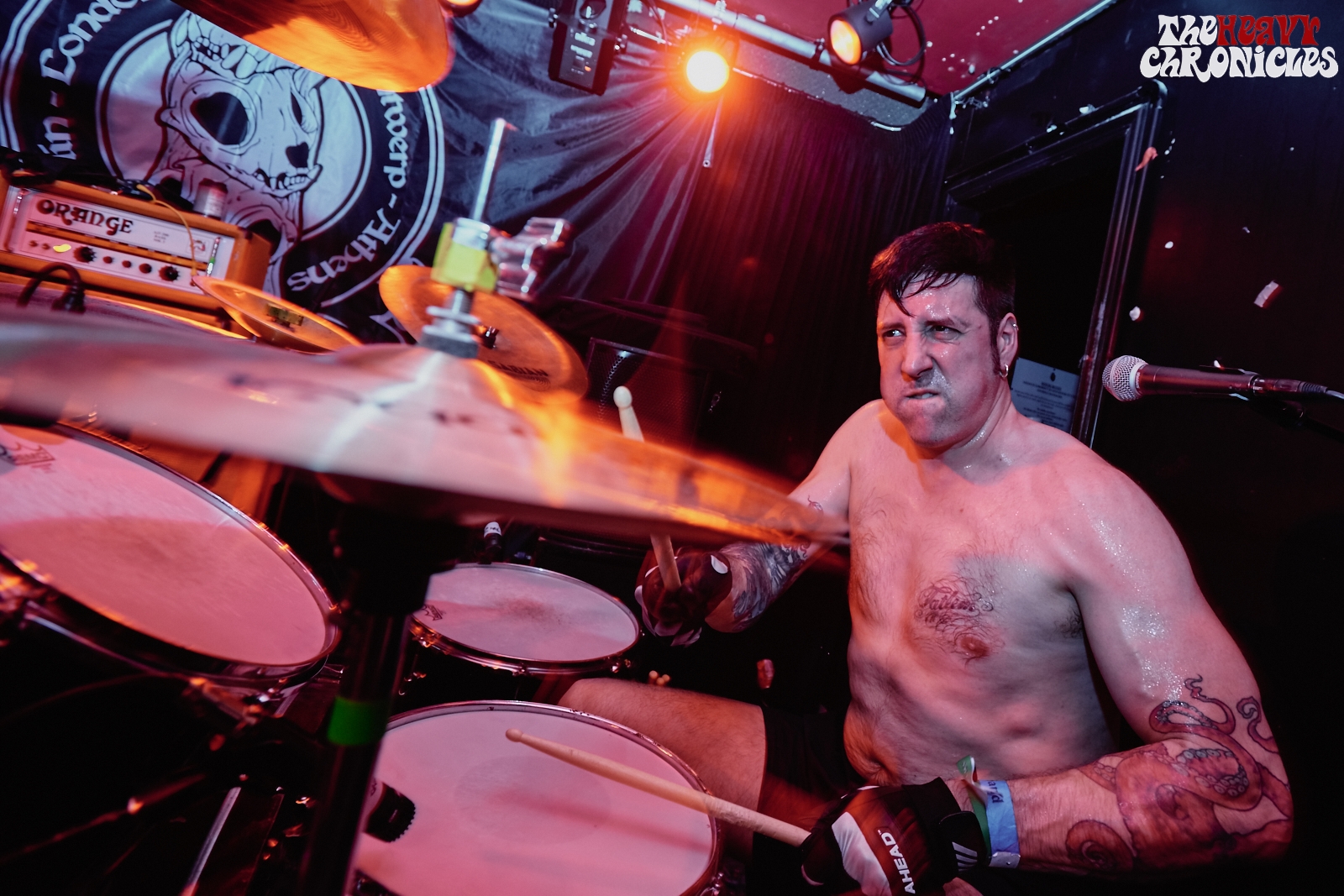 Half an hour later, we get out of here soaked and wet, ready for the traditional Spahn Ranch after party offered by our sponsors Ben Ward and Raza Khan. The perfect way to keep on headbanging, have a hell of a time with our friends from here and there, like when we start singing along on “For Whom The Bell Tolls” with the Monarch! guys… The THC crew will be one of the last to leave the bar, alongside the Metalorgie folks (French people be French people!) after what we will go on a quest for “the lost Falafel” in Camden. Night night, Desertfest…

READ DAY ONE with Corrosion Of Conformity, Crowbar, Asteroid…