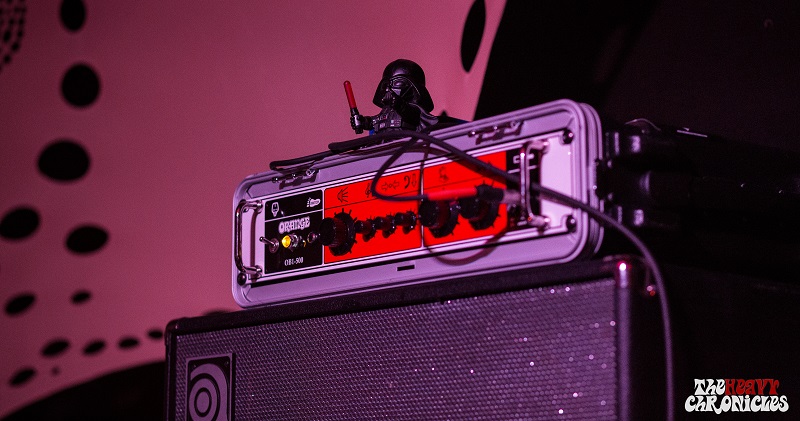 Day 2 at DESERTFEST BERLIN. An almost continuous chain of cool shows, that managed to surpass the expectations raised by a solid opening on Thursday. Rarely (if ever) have I been through nine straight hours so densely packed with awe-inspiring music. Danke schoen, Berlin. (PHOTOS: Jens Wassmuth)

Early birds (2pm on a Friday in east Berlin is early) like myself get to break their musical fast with SAMAVAYO, still one of Berlin’s best-kept stoner secrets in spite of several albums and extensive touring. There’s energy, nuance, and a remarkable drummer/back vocalist – which, as a mediocre drummer and an ever worse vocalist, I can only respect. As the show ends, I’m left wondering what these guys are missing to really make it out there. Especially when I find out that WE HUNT BUFFALO, whom I find much less original, are signed on Fuzzorama and got to support Monolord on their European tour. Still, the Canadians deserve a medal of bravery for pulling off a Kyuss cover (« Thumb ») during a Desertfest, and it’s good that the music we love has ambassadors in the Great White North. 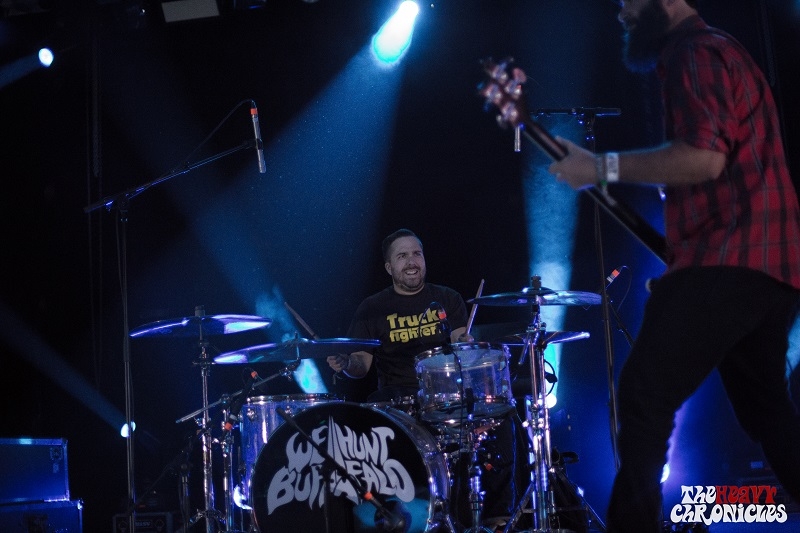 Fortunately, when it comes to originality, SOMALI YACHT CLUB has plenty to spare. Melting stoner with psych, shoegaze, reggae and more, the Ukrainian trio evolves in a rich musical universe that’s theirs, and theirs only. « If you want to dance, now is the time. If you want to smoke… also. » The audience chooses « all of the above » and embarks on a delightful journey. Now, when you’re attending a stoner/doom fest, after a while bands can start sounding a bit like one another – not these guys, though. And definitely not MONOMYTH, who step forward on the main stage with one of the most demanding, yet rewarding live acts I’ve seen in a while. Their riveting instrumental groove, powered by layers of synthetizers, progresses inch by inch, touch by touch. Ready for take-off! get so relaxed that I actually… fall asleep for a minute, which to me is a sign that this music meets it objectives.

I’m now expecting to go through a relatively low point in the Fest’s running order, but it proves (once again) remarkable consistency thanks to some fine local bands. THE LORANES, featuring ex-Kadavar bassist Mammut, deliver a solid set with a Black Rebel Motorcycle Club vibe that – in this context – proves highly refreshing. COOGANS BLUFF finds it way among the festival’s most pleasant surprises thanks to the band’s « X » factor, a dynamic sax/trumpet duo. The groove jumps back and forth between guitars and horns, providing each and every instrument with an opportunity to shine. 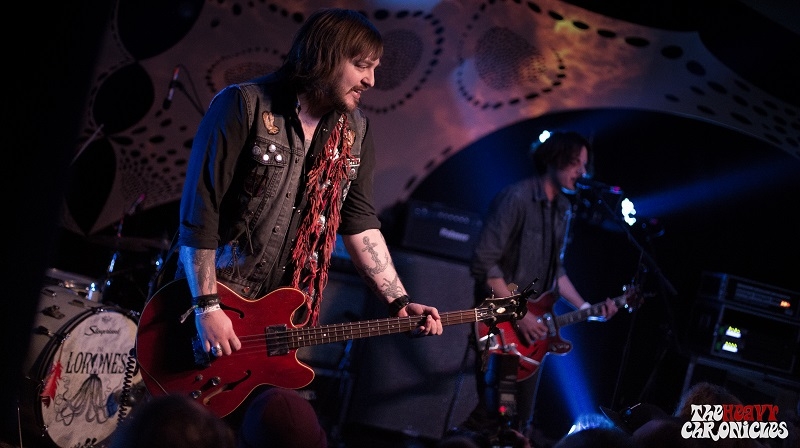 MONDO DRAG warms up the audience for Elder, as they have done in the past few weeks across Europe. The 5 of them are crammed on the tiny Foyer stage, which couldn’t possible take any extra passenger. Musically as well, they also know how to fill the space – with a heavy psych sound that, more often than not, carries a distinct Middle Eastern edge. The Mississipi River boys may lack the occasional chorus or catchy riff to tighten things up, but they offer a superb listening experience nonetheless. It puts my ears, mind and soul in the exact right spot – where they can be hammered to the ground by the mighty ELDER. A year after releasing one of 2015’s most beloved albums (try reaching the bottom of their supporters’ list on Bandcamp !), the Boston-based power trio shows no intention of slowing down. They play their (killer) new song as if they’d been rehearsing it for a lifetime, and « Dead Roots Stirring » as if it had been composed yesterday. Holy hell… a clear highlight of Desertfest Berlin for me. 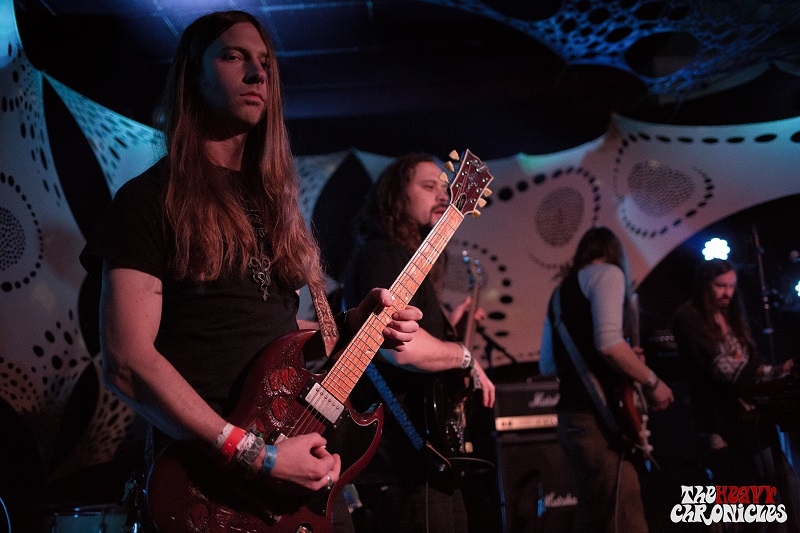 I take some time to recover, returning for MONOLORD’s already iconic « Empress Rising ». The crowd turns into a sea of banging heads, its waves broken only by the occasional beers-carrier. Through the various breaks in the song, I come to realize that Mika, on bass, holds Monolord’s crushing sound at the tip of his fingers. And I’m thinking (we all are) : « you can play that riff all night, guys, it’s fine with us! »

As I walk out for some fresh air, I get mesmerized by a strange tune that’s floating around the festival. « It’s not their best time right now », « ain’t what it used to be », « 1h15 of this is an eternity »… I, too, join the ranks of the who-cares-about-ELECTRIC WIZARD conspiracy, and stay out in the warm Berlin night, enjoying good beers and conversation. In a moment of doubt, I decide to see for myself – and get punched right in the face by the show-closing « Funeralopolis ».Perhaps we were wrong after all. Now I know I should never listen to strangers… 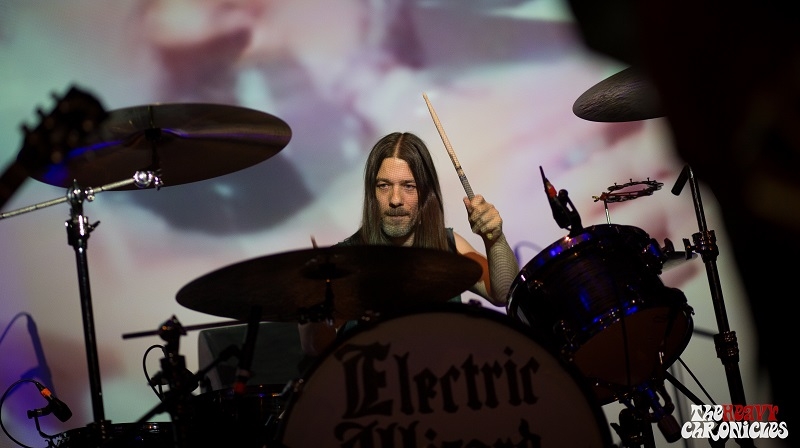 And guess who comes lurking about at the end of this all-you-can-eat riff buffet? Who? DEATH ALLEY

of course! Sometimes, when you think you’ve had your fill, there comes something that sparks your appetite once again – and you realize that you still have room for more. Well, this is one of those times. We’re well over midnight and on for one more hour of relentless rock’n’roll, in a hot, dense and rowdy Kulturhaus. The singer cannot believe his luck (« this show is a miracle! ») and neither can we.

What a day at Desertfest Berlin! A day that only a DJ set by Volksradio Moos could rightfully close.