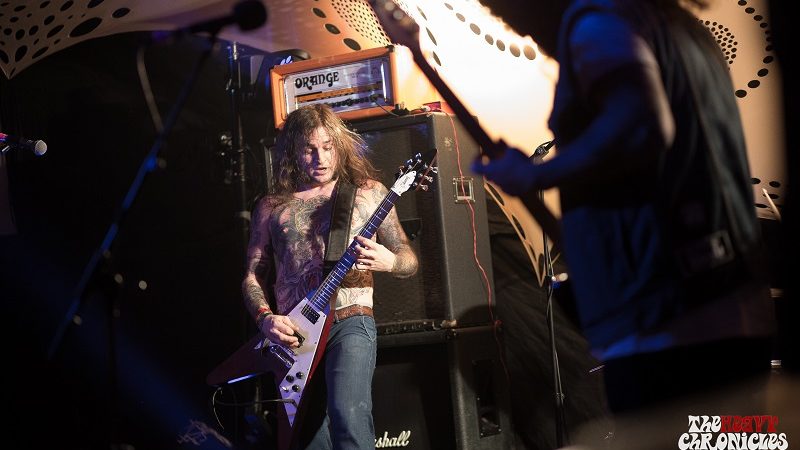 Day one at DESERTFEST BERLIN. If you’re a regular attendee of its London counterpart, imagine what it’d be like if all prices (tickets, accomodation, beer…) were slashed by two-thirds, with no overlap between the different stages, and a biergarten to chill between the gigs. If you’ve never attended a Desertfest, well… what the hell are you waiting for? (PHOTOS: Jens Wassmuth)

The Astra Kulturhaus is located in the east of Berlin (a portion of the Wall lies just a 5 minute walk away), in what happens to be the heart of the city’s nightlife – as well as its drug hotspot, but that’s probably just a coincidence (ahem). The Kulturhaus has a distinct « East Berlin » vibe to it, which owes to the countless graffitis on its facade, as well as its unassuming, age-worn looks. But I’ve learned not to judge a book by its cover, and as I will soon find out… that grey old building can still kick!

The German power doom combo HIGH FIGHTER has the first opportunity to prove it. Born from several other projects I’d never heard of (A Million Miles, Buffalo Hump, Pyogenesis), the band is loud and heavy as hell but fails to seduce me. In their defence, I must admit that when hearing growl-type singing, my reflex is to run very fast in the other direction. In the female-driven category, I find BABY IN VAIN much more convincing. These Danish girls sound like the Runaways on a cocktail of amphetamines and horse tranquilizers – which, believe it or not, I definitely mean as a compliment. Their performance is so riveting that it almost gets me late for my interview with Wo Fat! 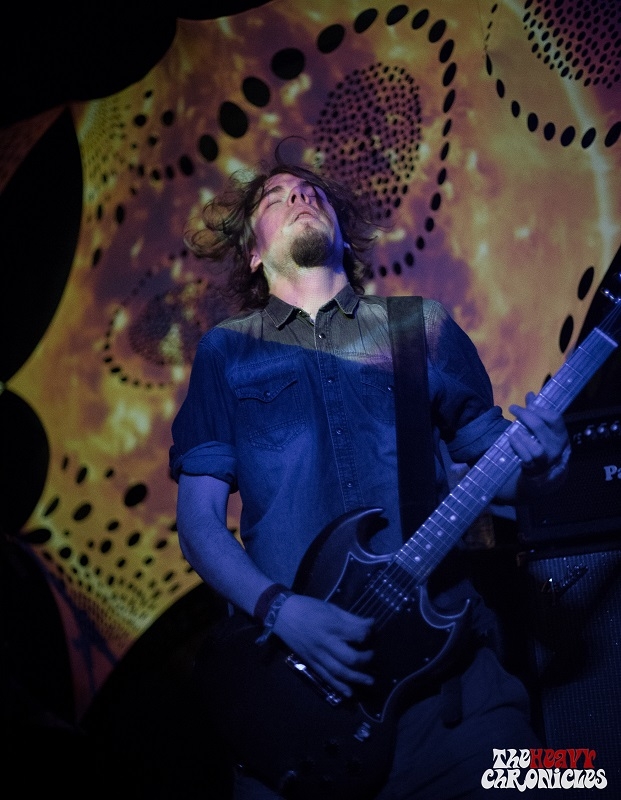 After a delightful conversation backstage, I’m back for the Swedish vintage style hard rock pioneers SPIRITUAL BEGGARS. A bit too 90’s for my taste, I must say – I’m half-expecting the drummer to disappear in a cloud of green smoke, Spinal Tap-style. But it’s done with a lot of heart, and the singer does a good job of warming up the main stage. The Texas power trio MOTHERSHIP are first (but not last) to give me a solid slap in the face on that day. Kyle Juett [bass/vocals]’s first words sum it up better than I could: « let’s boogie ! » His brother Kelley, on guitar, reminds me of a younger… Angus Young. These guys pull off good old fast-paced rock’n’roll as well as heavy doom riffs, nodding with style to Led Zeppelin’s « Heartbreaker » in the middle of a song. 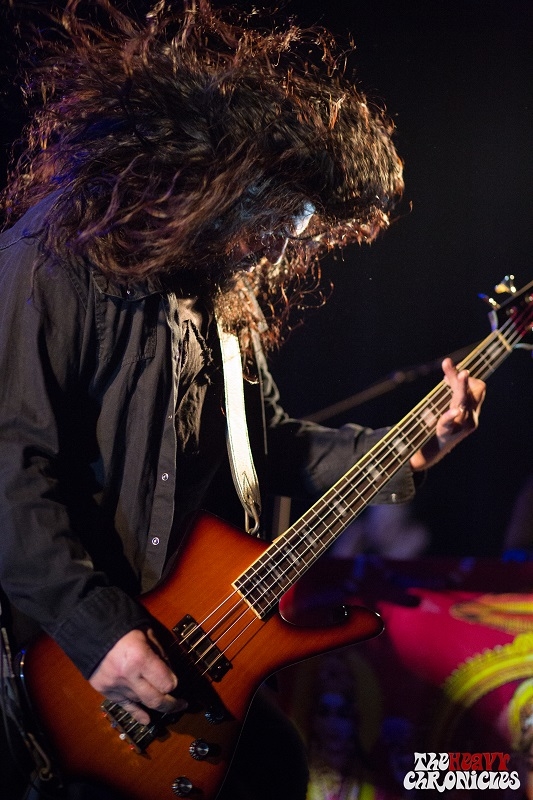 By contrast, PELICAN‘s show is colder and less fiery, but none less impressive. The ambition of their songs is quite fascinating – the Chicago quartet doesn’t need any singing to tell powerful stories. Definitely the kind of music that’s worth exploring for hours on record. I could the say the same about WO FAT, even though the Texans take a much « jammier » approach to their songwriting. There’s something about their swampadelic sound that gets me every time. The images of bursting lava playing behind the band on the Foyer stage provide a perfect background; the show is equally fluid and hot, hot, HOT! And the new songs from the upcoming Midnight Cometh easily pass the mosh-pit test. 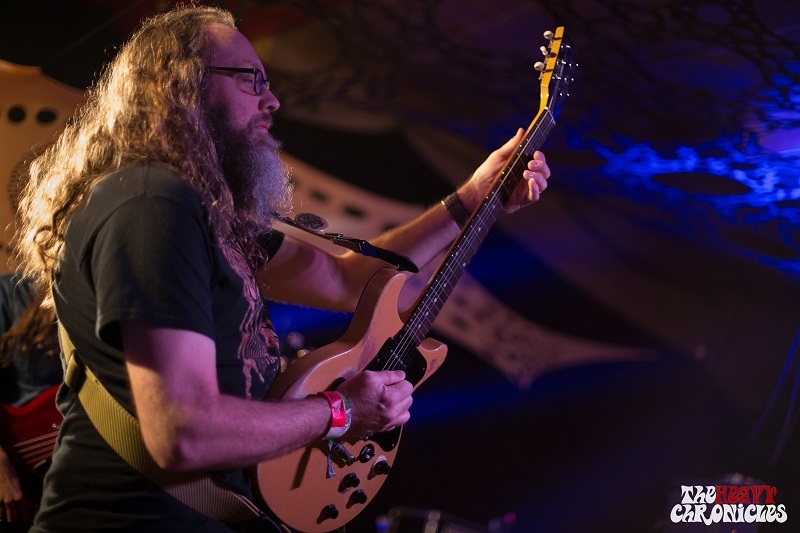 Time for one of the festival’s headliners – if that means anything here – to take the main stage. Here’s the problem with TRUCKFIGHTERS: the Swedes have toured extensively for the past few years, and (in my humble opinion) haven’t released a good record for some time. For many stoner/doomsters, seeing them live has become almost as mundane as buying a pint of lager. But to be fair, just like when you’re ordering a beer: even if know what you’re gonna get, it’s a good time nonetheless. They’re pretty tight, Dango is still jumping around like a maniac, and Ozo’s still got some solid pipes on him. I have to say, though, that playing « Desert Cruiser » as an encore felt somewhat anti-climactic. 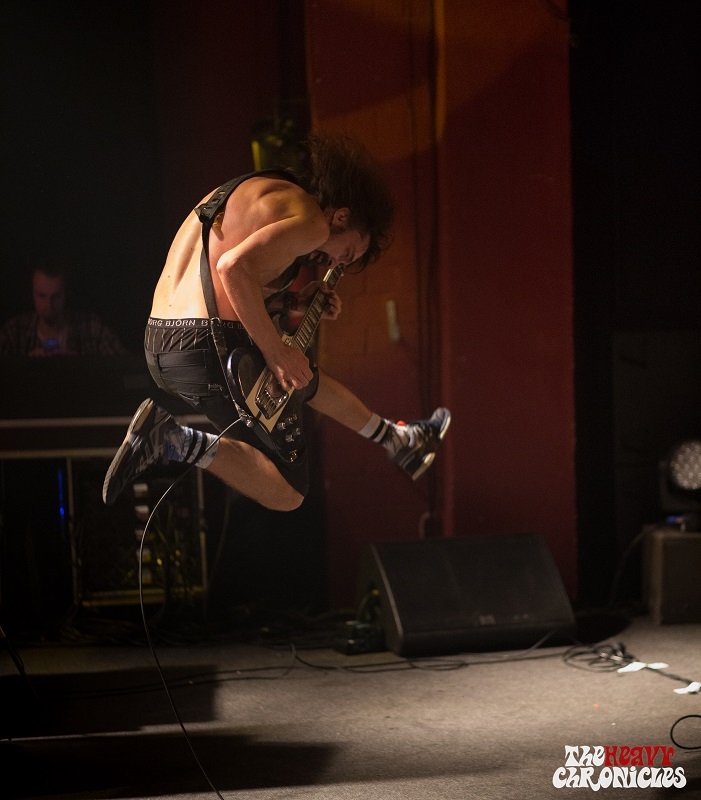 MANTAR, easily one of Germany’s most ferocious duos, finish the evening off with style… and brutality. As a friend of mine put it during the sound checks : « this isn’t going to be space rock. » No, indeed, not quite. A sound so raw that it almost bleeds the atmosphere… utterly destructive and deeply disturbing. Having just gone through a day of relentless eardrum beating, and having signed up for two more, I had to escape half-way through the show. But man, THAT was heavy! 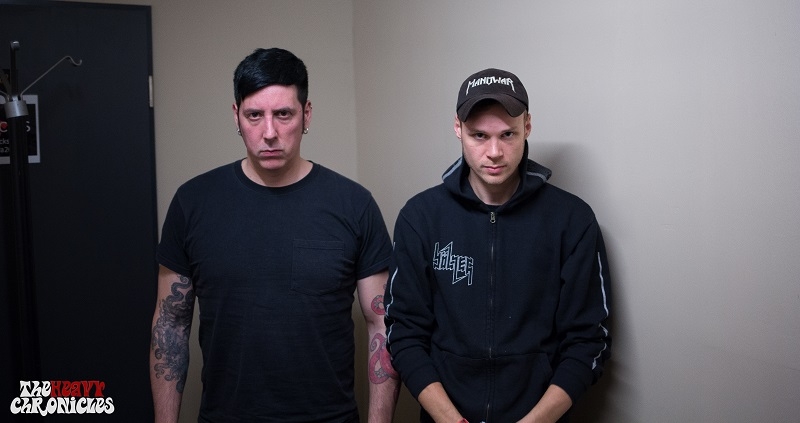 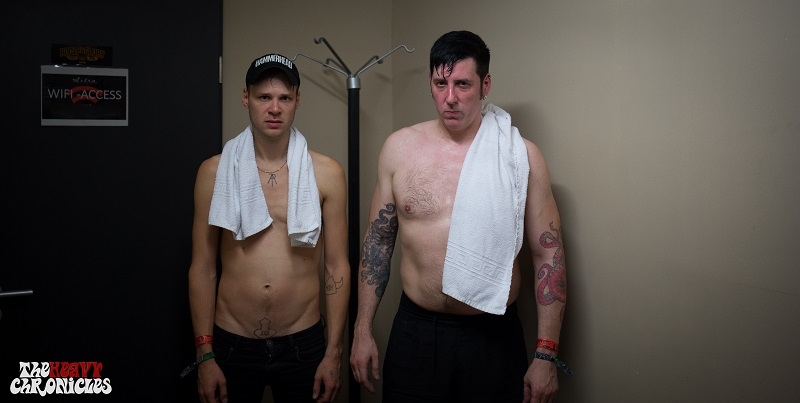