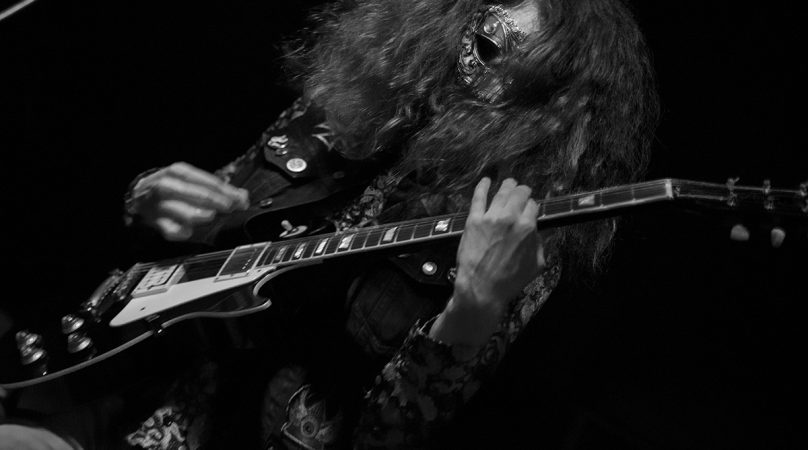 As the undercover agent I’ve been since the creation of Make It Sabbathy nights in Bordeaux, it is with my backbone still shaking that I’m posting this live review of – “hello, we’re the wall of Doom” – MONOLORD and SALEM’S POT in my hometown. As expected, the Heretic Club basement almost fell down on this 15th MAKE IT SABBATHY night… H.E.A.V.Y. (Photos: Sandra Basso)

“Undercover” for real, as yours truly was welcoming the Swedish outfits at the venue on this sunny afternoon of February. After both bands were done doing their laundry down the street, I took some time to sit down with Monolord for a quick but very enlightening interview (read here). At 9PM sharp, Bordeaux stoner and doom lovers flooded in the Club to see Rouen-based GREYFELL on stage. Unfortunately, my duty as a promoter made me miss their whole performance, but the trio visibly made an impression, given the positive feedback I got from people here and there.

Twenty minutes later, this mysterious five-piece we know under the name of SALEM’S POT got on the Heretic’s small stage, wearing venetian masks – to hell robber masks! The band planned to bring candles on stage, but when they realized there was no room there, they laughed: “we don’t want to burn Bordeaux down already… we want to come back here!“. Neither do we. I mean, so do we. Anyway! In the dark, the atmosphere was electric, everyone being eager to FINALLY see those crazy riffsters – who appeared out of the blue in 2014 with an insane psych doom record entitled “…lurar ut dig på prärien” (reviewed here). And let’s be honest, it started off with a bang…

No matter how many times I listened to Salem’s Pot album last year, one thing that hit me tonight was this 70’s hard rock flavor in their music. Daaammmn, this band can sound BOOGIE as hell, too! When you attend a “monuments of doom” night like this one, this kind of feeling brings an unexpected joy to your hearts, making you sport a quite silly smile until the last riff of the whole show (yes, even during Monolord). We enjoyed their occult sound – to a backdrop of vintage footage – sprinkled with delightful dance-inducing accelerations. The Swedish hippies spared no one: each track was savagely heavy and groovy, the crowd roaring with pleasure all through the show… We’d have even asked for more if timings weren’t so tight.

After a short cigarette/beer break, we made way for the Lords. The lords of modern doom. The guys who kicked the ass of all fuzz addicts across the globe last year, with their first record released on Riding Easy Records (also reviewed here, how convenient!). MONOLORD made their entrance in a packed room. I have to say that no matter the song they’d choose to kick off a show, the result would be the same: CRUSHING AS FUCK. As if the world suddenly stopped spinning and only Monolord’s fans would survive, celebrating the Gods of Fuzz in a huge feast of wild riffage and destructive heartbeats…

Even though the trio uses a massive set-up (these pedal boards are fucking huge!) to produce this hulking sound of theirs, it is mostly their presence and mastery that enthralled us all. Simple: when you see Monolord play, you just want to say “RESPECT”. Speaking of which, people were religiously contemplating this Wall of Doom, senses being alert and peace pipes being merrily smoked. So when frontman Thomas Jäger got in the pit to hammer his riffs, people were like caught in a hop, numbed by the sound. The front row remained awestruck in front of bassist Mika Häkki’s contagious energy and fearsome fingerpicking. A brilliant cover of Sabbath’s “Fairies Wear Boots” (see below) later, the band wrapped up this mind-blowingly heavy show with the now emblematic “Empress Rising”, sweeping away every remaining neuron in the room. Monolord left us deaf, numb, dead, with an intense feeling of being privileged. With such talented bands operating, we can officially say the doom scene is going well in 2015…