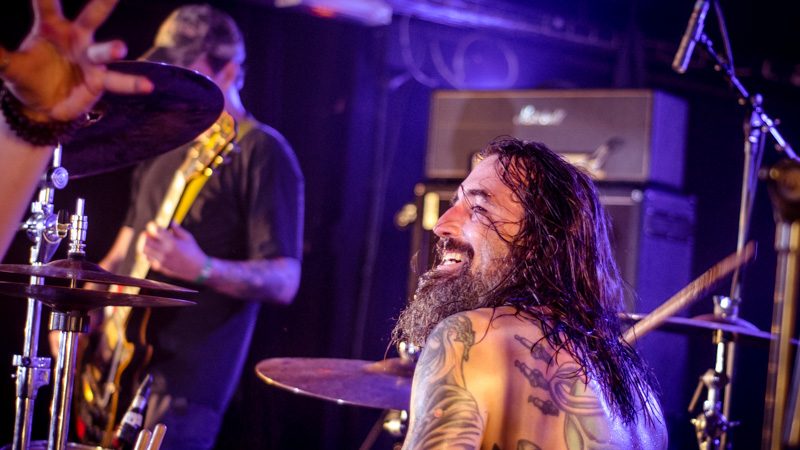 You had to be crazy or have a really good excuse to miss Stoned Gatherings on March 10th in Paris: WEEDEATER. GURT. DEAD EXISTENCE. And (surprise!), KING PARROT. Sludge, sludge, more sludge, and some grindcore for the tough ones. Some of us just lost all mental ability on this night, while some others went back home fullfilled and with a huge grin. And for everyone, it was a fucking great time, as always at Stoned Gatherings. (Photos: Sylvain Golvet).

After I enjoyed Glazart’s very popular happy hours and greeted most of my friends of the Paris stoner fam’, I rush inside to find out about the first heavy delivery of the night: DEAD EXISTENCE. These five guys are quite well-known in London, and that’s certainly not a gig out of their territory that will make them lose their countenance, far from it! With their sound that is reminiscent of the heaviest New Orleans outfits, the band blasts a strong sludge metal drenched in steel, with songs over ten minutes that crush you down the ground. And even though they all look like very nice fellas, you get convinced straight up by their mastery, their angst and killer grooves. Glazart is far from being packed right now (to be honest, most of the people are outside smoking and drinking), but dozens of driven folks are headbanging like one man in front of the filthy yet really cool British five-piece. 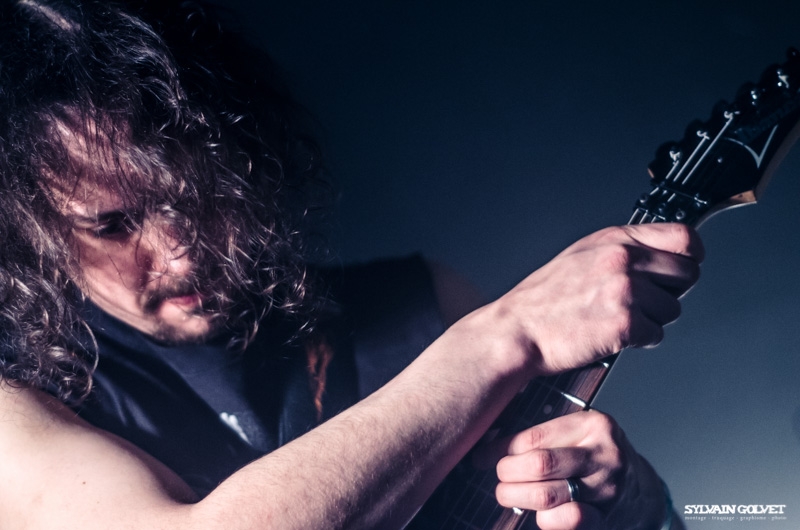 Before I carry on, let me clear one thing up: the bill as it was written on the SG networks let us think that GURT would play right before Weedeater, but a last minute change made them play in second position. That was a big disappointment for many of us here, as you should know that the Stoned Gatherings followers are real supporters of the band. It’s thus with a fresh pint in hand that I join the front row to see my British friends on stage… And what a pleasure to hear songs from the last album “Horrendosaurus” live, along with classics – that some people know inside out. Tonight, Gurt give us all we came here for: thick riffage that infiltrates your brain like a vicious drug, plenty of groove, and four guys who not only came to give us a proper lesson of Heaviness, but most of all who’re having fun like no one else. And because they feel like home, the Brits even treats us to a goodie with a new song entitled “Spoon”, which will be featured on their upcoming record. Four sludgers in their element, made-to-measure hit songs, loads of beer: the SG crowd is way satisfied now. 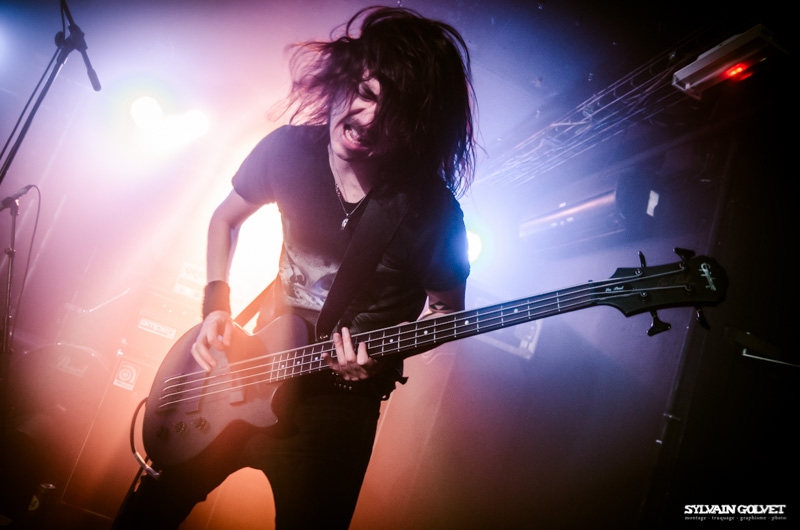 Time to enjoy a cold one outside and catch up with the Gurt family, then I already hear some kind of hullabaloo coming from inside. I have to be honest and let you know that grindcore is faaaar from being my cup of tea – otherwise, this website would probably be called “The Fast Chronicles” – and right now I’m feeling like a hippie on sedatives who’s getting tackled by a hooligan on speed. I hold myself aloof and look at Australians thrash-mongers KING PARROT tear the Glazart down, with a brutality that not only emanates from their music, but also and above all from their nihilistic and very provocative attitude. Sweat is dripping from all parts, and the pit has already taken a whole new turn – some people definitely didn’t come to enjoy greasy and smoke-filled riffs tonight. King Parrot are undoubtedly stage beasts, and I’ll need only need one pic to prove it to you: 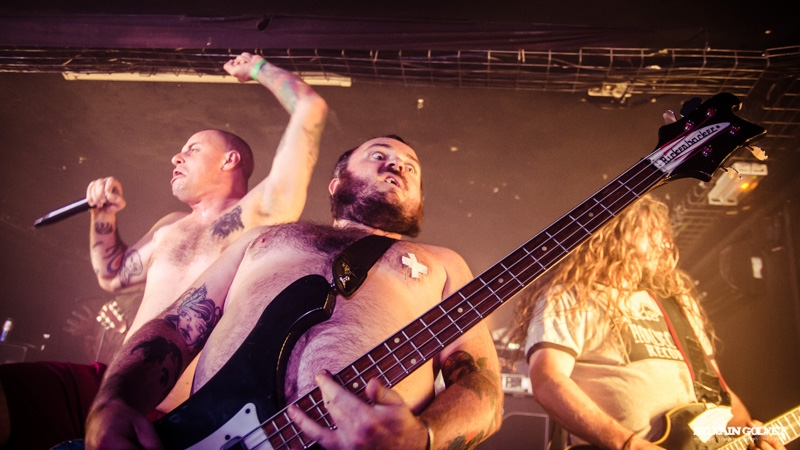 It’s now 9AM and WEEDEATER – whom we haven’t seen in Europe since Desertfest London (remember, “Gimme Back My Bullets” with Wino as a guest…) – are taking the stage. Aaaaah, what a thrill to hear those highly recognizable fuzzed-out and down-tuned bass tones along with Dixie Collins’ sepulchral vocals… Right off the bat, we get treated to four songs off their last record “Jason… The Dragon”. Shep quickly breaks a string, yet the weed eaters don’t have time for bullshit and keep the good stuff coming with “Good Luck and God Speed”, inducing relentless crowdsurfing from the overjoyed audience, so well that a neon light comes off the roof. 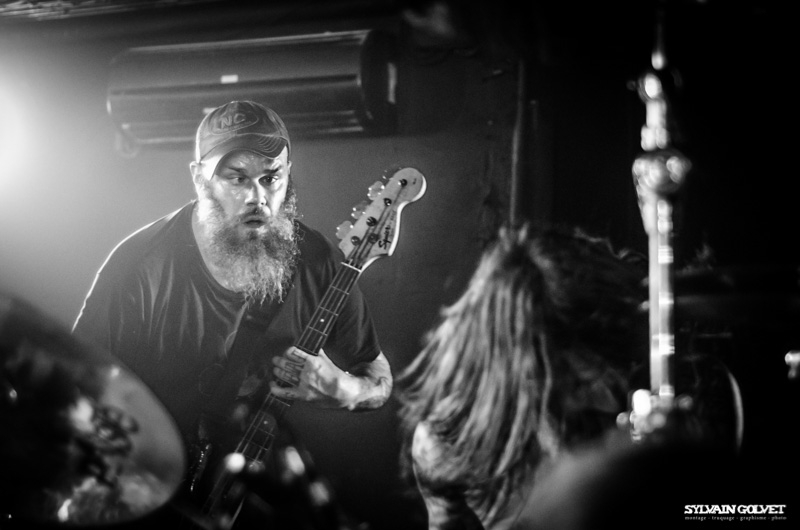 From the right side of the stage where I’m having much fun watching Collins giving his all, I decide to join the dark side of the force and witness one the most insane drummers the metal world has known: Travis “T-Boogie” Owen. He’s defo the star attraction of the show, pounding his drumkit like a completely possessed entity, while constantly twirling his right drumstick without a single fail. A couple of blues-soaked sludge anthems later, their famous cover of Skynyrd’s “Gimme Back My Bullets” sounds the near end of this off the chain – although rather short – gig. Dead Existence’s bass player joins Dixie on the mic and delivers the lyrics a bottle of Bourbon in hand. Standard.

That’s not every night that you get to see such a cool and diverse lineup, and beyond the excitement of seeing Weedeater in such a nice venue with only friendly people, I was also chuffed to two of the finest British sludge acts, who’re both definitely ready to pick up the torch and take it to a new level of awesomeness. All this, only happens at Stoned Gatherings!