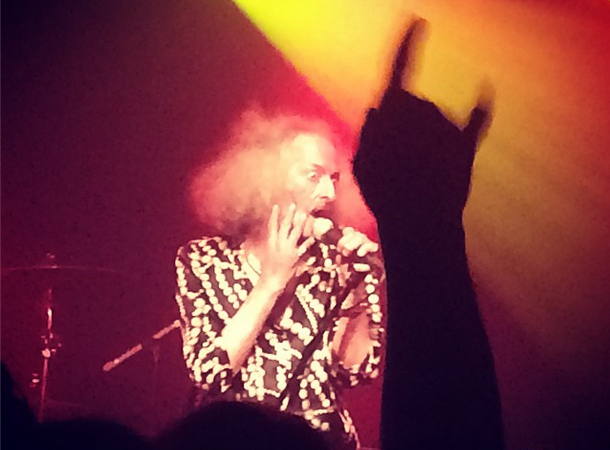 After a full-on night of stoner rock debauchery with Steak, Greenleaf and Sedulus at The Borderline, I had no other choice than wrapping up this fuzzy weekend in London with the fine doom and heavy metal acts that are PENTAGRAM, THE ADMIRAL SIR CLOUDESLEY SHOVELL and SERPENT VENOM. If you’re familiar with the Desertscene shows, then you know you’re always in for a treat… But THIS very show? If you weren’t here, than I’ll tell you why you really shouldn’t have missed it.

Within the last two years, I’ve been lucky enough to see Pentagram no less than three times and The Admiral Sir twice, so it’s quite naturally that SERPENT VENOM was the main reason why I attended tonight. Word of mouth brought their already amazing first album « Carnal Altar » (released in 2011 via Church Within Records) on my table, but I have to say their new record “Of Things Seen & Unseen” particularly blew my mind, in such a way that I just couldn’t miss that show – especially as the band doesn’t tour very often. So what a wonderful surprise when they start their set on “The Penance You Pay”, the last album’s behemoth opening song. As soon as the first notes echo in the venue, my ears twitch and I dash to the front to get my face crushed by this majestic beast of doom. Indeed, Serpent Venom know how to crush brains with class: from beginning to end, the band perfectly blends utter heaviness, precision and catchy melodies, all this with a disconcerting facility. Each riff, each drum hit, each bass pulse is perfectly in its place, nothing – I mean, absolutely NOTHING – needs to be thrown away. The only thing that slightly disappoints me right now is vocals. Not that the latter are miles away from the studio versions, for Garry Ricketts has that exact same beautiful clear voice… But it’s just that he sings half a tone higher during the whole show. Maybe I’m nitpicking a little bit (okay, a lot). Anyway, Serpent Venom is a war machine that has everything to please any old school doom metal fan out there – and as far as I’m concerned, I’ve had a dumb smile on my face since they started playing. Let’s just hope that I won’t have to cross the Channel to see them next time!

After a quick stop at the bar – where the staff is already overwhelmed – come those heavy motherfuckers from Hastings called THE ADMIRAL SIR CLOUDESLEY SHOVELL. But firstly, let me set a bit of a context regarding the present review: the first time I wrote about this band, I more or less proclaimed that they were in their 50’s – which is wrong – and that they looked like they got straight out of an episode of Austin Powers – which is only true in the case of the bass player. After what they clearly got me to understand that I was damn lucky, because they’ve beaten the hell out of people for less than that. Then we toasted pints. This is why this time I’ll focus on the music. Taking full advantage of the venue’s great sound and a very receptive audience, the lawless trio delivers some fucking old school heavy metal, or as Diamond Head would say: “it’s electriiiiiiiiic!”. Seeing The Admiral on stage is like enjoying all the best elements the NWOBHM era had to offer at that time, performed with fury and a total ‘no fucks given’ attitude – like only the Brits know how to do. The Admiral is in the house, setting the amps on fire, digging it, and if it happens that we’re also having a blast, then it’s just the icing on the cake. Seriously, those fellas are good. Proof after the jump:

The Garage is now packed, beer is being relentlessly poured at the bar, merch guys seem content, everybody’s damn ready for what’s next. I’m myself feeling extremely merry, all set to fully enjoy my fourth PENTAGRAM show. It has to be said that legendary guitarist Victor Griffin recently got back in the band – for good? – which arouses my curiosity even more, given that I’ve only seen the band performing with Matt Goldsborough. The foursome commences hostilities with « Too Late » from third album « Be Forwarned », and almost instantly the audience put their hands in the hair and start jumping around… I watch around me just to make sure if I’m still in London, and well… looks like I am! Two or three songs later comes their classic “Forever My Queen”… Seriously guys, I think I’ve never seen a crowd react so energetically at a show of this size in London! Pentagram make the most of this positive energy, getting heavier and heavier, while Bobby – who’s not specifically known for being the warmest man on the planet – well, Bobby is grinning like crazy. I decide to let go and get carried away by Griffin’s evil solos, Kratos’ monstrous bass licks, Saley’s heavy beat-up on drums, while Liebling is moving about around of his riffmeister, pulling the same faces as a possessed necromancer. “Be Forwarned” almost sounds the end of this amazing gig, yet despite that (sad) fact, everyone will remain in an uncontrollable state of bliss until the very last note of “20 Buck Spin”… Yet another awesome night in London, for what has been a weekend full of killer performances and good vibes. Good job as always, Desertscene!