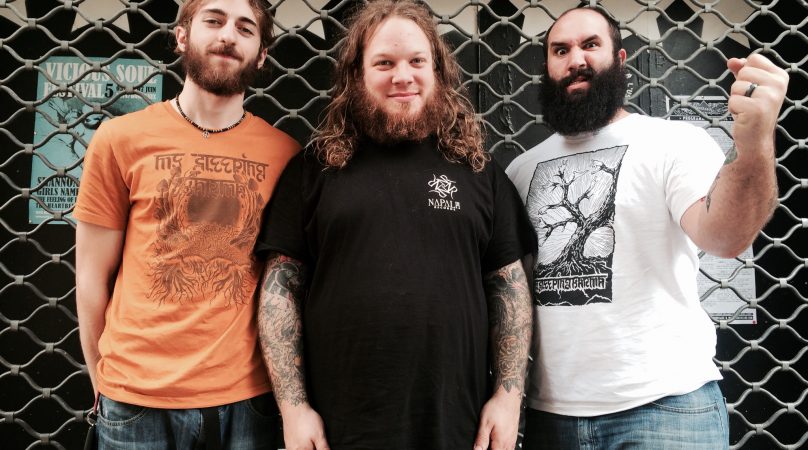 It’s not everyday that you get to see a live band that plays so loud and gives so much energy on stage, that you feel like a fucking storm is being unleashed on an enclosed space of a few meters square… Kansas trio THE MIDNIGHT GHOST TRAIN have managed to extract all the warmth of blues music to blend it with this high tension feeling coming from pure rock’n’roll, after what they let the mixture marinate in an ocean of grease and overdrive. This unstoppable « heavy delta blues » storm, many of you guys have probably already seen it a couple of times in Europe this year. And given the memorable right hook we’ve got given at each and every performance of the band, I would have been silly not to have a little chat with its founder Steve Moss, when the band played in my hometown Bordeaux. When he is not armed with a Gibson guitar and his gritty voice, the frontman of this one-of-a-kind rock trio shows us that if THE MIDNIGHT GHOST TRAIN’s music is so incredibly delightful, it’s because it goes straight out from Moss’ heart, with no filter. These guys tour to live, and most importantly: they live to tour. They breathe music. A lesson of humility with the man who’s the driving force behind that hell of a train… (PHOTO : The Heavy Chronicles)

And before doing anything else, press play and get caught by the TMGT storm…

Could you start by describing The Midnight Ghost Train’s sound?

We’re like a heavy rock/blues band. We play really heavy. I don’t particularly like the term « stoner rock », and none of us even smoke pot. We’re really bluesy, but sometimes when you say « bluesy », especially in Europe, people think « boring ». To me, the blues is where it all comes from. I don’t know metal, I’ve never heard a Sleep or a Pentagram record, I’ve never been really attracted to this. If it was up to me, I would play acoustic old blues stuff, but there’s something about playing really hard and fast… Because I just couldn’t contain myself.

You mentioned the « stoner rock » term. I feel like these days, pretty much everyone tends to label any heavy rock band as « stoner », which is not accurate at all, as this music is above all else related to psychedelism and smoked out vibes.

Yeah, and it makes you think that we’re a stoner rock band, like we just sit around and smoke pot all day. But we work our asses off!

Even though you said you’re not into the heavy kind of stuff, you’ve however played a couple of heavy and stoner festivals since last year, like Desertfest, Up In Smoke Fest… Which live bands did really grab your attention during such events?

The best band we’ve ever played with is the Black Diamond Heavies. They blown me away. We’ve played with so many bands and do like 300 shows a year, and these guys were probably the best band I saw. In the heavy/stoner scene, I would say Jucifer. We did a four months long tour with them, and they consistently put on a fucking amazing show. It’s not my kind of music, but they’re very inspirational to me considering live shows and their work ethic. They taught us a lot, and I love these guys to death.

Jucifer are a bit like you, constantly touring, except that I think these guys are nomads, literally.

Yeah. When we went out with them, we were completely unknown. We played one show with them and they liked us, so they asked to be an opener for them. We had done a few tours so we thought we knew the hell we were talking about, but we didn’t. We learnt a lot from them.

“If it was up to me, I would play acoustic old blues stuff, but there’s something about playing really hard and fast… Because I just couldn’t contain myself.”

At what point did you choose to tour so much?

We suck at everything else. I used to be a teacher before all this… We have to do this, and if you want to do it for a living, we have to tour quite a bit. Hopefully, one day we won’t have to tour as much so as to make the same amount of money. It’s tough. Our entire focus is doing what’s best for the band at all times. 24 hours a day we’re putting work into this, in one way or another, and there’s actually only one hour where we get to do what we love. Every conversation we have has to be about music in some way, every bit of money that comes in goes back into that, every single thing in our lives circulates around this band.

I just couldn’t do anything else, this is what I was born to do. The time that I’m on stage is the only time when I’m able to release who I am and be this person. And without being able to do that, I just don’t feel comfortable in myself. Like having to restrict myself the rest of the time, you know?

It’s a bit like people who attend metal or rock gigs, they just have a couple of hours to cut loose, when life feels pretty boring the rest of the day.

Yeah, it’s like when I see you at the show. I look at you now and you’re a very clean-cut pretty girl, and at our shows you’re always like “yeeaaaaah!!!”, going fucking nuts. It’s the same thing, it’s a release for all of us.

Have you ever felt like running out of energy at some point?

Fuck no, no way! (laughs) We’re just getting started, we’ve got long ways to go. Every single step we take forward, there is always a step back. Seriously. This band is so close to my heart… So when something goes wrong, it hits me right there in the chest. It gets really stressful, but that hour on stage makes it all worth it in the end.

When you’re not on tour, which doesn’t happen quite a lot, what do you do?

We just finished writing the new record over the course of the time that we’ve been home, before this tour (as I’m putting out this interview, the record has been completely done). But aside from the music… Like I told you, it pretty much takes every bit my free time. But I have two dogs, my wife. When I’m home, I try to give as much as I possibly can to her and make up for the time that I’m gone. Making her feel extra special and showing her how much I love her and appreciate her support in my dream. And my dogs, pffff, they’re the best! I give everything to them… Maybe more to them than to my wife, but she’s okay with that. (laughs)

My Mom and my sister and my wife. My Dad, he passed away, but he was an insanely huge support for me. I owe everything to my parents, who have constantly pushed me and supported me, while I was like “why are you so proud of me wanting to go on the road and make no money and play rock’n’roll for a living?”. It was crazy to me. They’ve always been like: “If you ‘re going to do it, do it to the fullest. Don’t give up and push it hard as possible”.

“The new record is gonna blow “Buffalo” out of the water.”

Earlier on, you were speaking of the new record. Can you tell me more about it?

It’s gonna fucking rule! It’s gonna blow “Buffalo” out of the water. We’re gonna work a little harder on making more production on it. For “Buffalo”, we went to the studio and wanted it dirty and we got that. For this one, we really want to take more time in capturing the sound we want, in order to make a better sounding record, not as dirty and more pleasant on the ears.

What about the songs?

There is no concept, it’s pretty straight up rock’n’roll. There’s more singing on this record. Since we have a new bass player (Mike Boyne), the bass parts are a lot better. Me and my drummer wrote the bass parts for “Buffalo”, and we don’t know shit about bass… So yeah, it’s just gonna be an all-around way better record, it’s about to top everything we’ve done before.

Then we will all explode.

To end this interview, what are the albums you’ve been listening to lately and that you’d highly recommend to the people.

Like I said before, I listen to a lot of old blues music. Everything by Tom Waits, I listen to religiously. Ray Charles is also a huge thing for all of us in the band, so we probably listen to more Ray Charles than anything. A lot of Queen, too. The newest Fiona Apple record, “The Idler Wheel”, really blew my mind when I heard it. I think people who aren’t Fiona Apple fans can really appreciate this record. It’s very inventive and alternative, it’s like a female version of Tom Waits.

New album “Cold Was The Ground” will be released early 2015 on Napalm Records.
Catch THE MIDNIGHT GHOST TRAIN on Facebook and their website

10 minutes with Thomas Brenna and Stian Helle of LONELY KAMEL