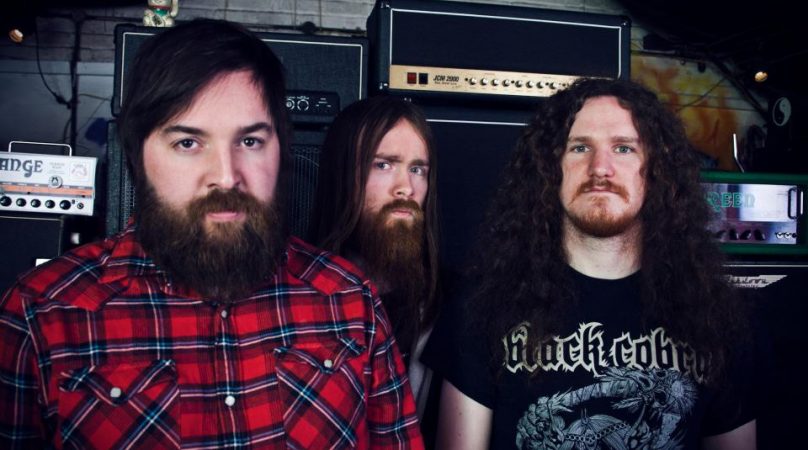 I remember the first time I heard of WOLFSHEAD. I was touring Spain in a van packed with British dudes, when one of them told me « if you have to check out one band, it’s Wolfshead ». It was crystal clear, and coming from a stoner rock friend of sure taste, I decided to give them a try as soon as I got back to France. To give you an idea of what this heavy trio is about, just picture a huge puzzle of crushing and highly melodic bands à la Kylesa, Baroness, Torche. Then throw a very determined British outfit from Fleet, Hampshire in that muddy mixture, add a tinge of « I-don’t-give-a-damn » attitude, and you’ll get Wolfshead. These guys on a stage are like a freaking hurricane, the only difference with the latter being their positive impact on people. You missed their show at Desertfest? Bad bad people. But don’t worry, the trio has more in store for you. I made the most of my presence at the festival to meet up over a beer at Brewdog with their guitarist and vocalist Mart Anthony, just to know what they’re up to right now. These guys don’t take themselves too seriously in their music, but when it comes to talking about his passion, Mr Anthony is just the best spokesperson you want to meet and share views with. Enjoy.

First of all, can you introduce WOLFSHEAD to the world?

Mart Anthony (guitar & vocals): We are a doom metal band from Fleet, Hampshire in the UK. Our first EP came out in March 2012, we released the single « Sword Of Fire » six months after that. All those efforts so far has been downloadable through our Bandcamp. Being a brand new band, it’s kinda hard to get people listen to your music. So we decided to put absolutely no barriers between people and our music, just make it free to download, so that people can grab it as easily as possible. And it seems to work out so far.

You had the chance to have your single featured on a Metal Hammer compilation CD. How did that happen?

Rich – who plays guitar in Gurt and Sedulus – he works with one of the guys at Metal Hammer. I think we first contacted them about putting a track on the « Sons Of Sabbath » CD. We went around, looked the magazines, and the track was not on it… Then we were completely surprised to find out the following month that we were in the « New Year Revolution 2014 » compilation, which was awesome!

Afterwards, did you get more attention from the promoters, more fans on your networks…?

There’s a bit more traffic coming to our website, a bit more downloads… Promoters, not so much, I think. But we were asked to play Desertfest after that, so maybe it helped them make the decision to put us on the Sunday, which is cool.

I guess touring outside the UK will be part of the plan sooner or later.

Yeah. We haven’t done a UK tour yet, so unless there’s suddenly an increasing demand overseas, we can’t see us doing that before we’ve done the UK. We also need to tie it with the release of an album. We’re not big enough to pull a headline crowd.

So what are your intentions regarding the release of a full-length, then?

Our new drummer joined in the summer of 2012, so before then it was just Leigh – the bassist – and I. We’ve known each other for about ten years and we played in bands before, and Leigh’s a drummer before being a bassist, you know? All the stuff we recorded so far we wrote really quickly, because it was fresh and we had a lot of time. But we moved to different places, works changed, so it’s been a little harder. And now we’ve got a third person in the band, so you have to adapt more, it kinda slows it down a little bit but it also kinda grows more in scope. Justin listens to a lot of punk and stuff like that, so it’s another element to add. We are writing at the moment, the new stuff is a lot heavier than what we’ve put out so far.

Heavier… and slower as well?

Slower AND faster! And more metal! (laughs) When Leigh and I started to jam, we were kind of like writing hard rock songs. « Warbringer » was the first song we wrote, some fistbump kind of rock song. The second track on the EP, « The Garden », we changed a part of that song about maybe two weeks before we recorded it, but it completely changed the feel of the song. It went from being a dirty rock song to doom song. So we weren’t so much of a doom band to begin with, we were into The Sword and all those kinds of things, but now I’ve listened to heavier music since then, bands like Black Cobra, High On Fire, Sleep, whereas before I was more into Black Spyders, Karma To Burn… That’s why the slow stuff got slower and the fast stuff got faster, it’s all got much more energy, it’s really saturated. A lot of rage.

What about the « garage doom » mention you put on your Facebook page? Is it still relevant, according to you?

Yeah. Back then, it was more appropriate because we had more of a hard rock vibe going on. Leigh is a big fan of The Hellacopters, you know? Now it’s a lot more stoner metal. I think it’s healthy for bands to change their sound, not drastically, but it keeps it fresh to be constantly evolving. People change! There are bands that have been going for 15 or 20 years, people would listen to that new record and say « oh nooo, it’s not this album ». Well, people aren’t the same as they were 15 years ago, they’re not as angry anymore, maybe they started listening to jazz… Musicians are human beings, in the first place.

Is there any record that really surprised you lately?

I don’t really keep my head to the ground when it comes to new records. I like loads of different kinds of music, so if I’d buy all the records every month, I wouldn’t have any money left for food! I remember when I first got « Invernal » by Black Cobra, it completely stepped up from the previous album, I was like « this is AMAZING ». There’s this band called Year Long Disaster (a rock band formed by Daniel Davies and Karma To Burn’s former bassist Rich Mullins, successively including other KTB members), it was just good hard rock with a different edge, Karma To Burn’s stoner rock edge to it. I got it from a record store in Wales last year, and I’m still listening to it today. I mean, I listened to it on the train up here! That band is one of my favorite bands. Just stomping hard rock music, to get you in the mood to party!

What can we expect for tomorrow’s Desertfest performance?

We played the Black Heart in November with BongCauldron, and we were told that we’re louder than Motörhead, which is pretty good… This kind of music definitely works with volume, so… Volume and riffs. Hopefully there will be enough people in the room so we won’t see the back. This festival is great, because as well as having loads of big names like Kvelertak or Spirit Caravan, you have small bands or bands on the up like Wizard Fight, Ghold… You’ve got the whole spectrum of bands at this festival. So hopefully it’ll give us a chance to be seen by people who wouldn’t have necessarily come to see us.

Maybe! We can dream! (laughs) Baby steps. It’s hard these days, but if you look in the right direction and have an idea of where you want to be, and you’re passionate enough about it, then hopefully someone notices.