10 minutes with Thomas Brenna and Stian Helle of LONELY KAMEL 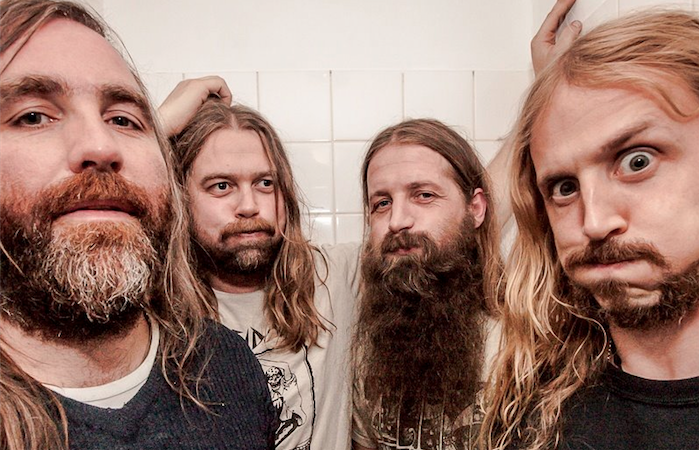 Celebrating the release of their new album “Shit City” this fall, Norway’s bluesiest fellas LONELY KAMEL naturally went on a mission to invade Europe with their Swedish bros THE ORDER OF ISRAFEL. Le Divan Du Monde in Paris was the penultimate date of the whole tour, and I have no doubt the band will remember that one: that night has seen the craziest amount of true worshippers a band could ever dream of. Seriously, people were in a trance, knowing all the lyrics, crowdsurfing non-stop – would you expect a moshpit to happen during “Damn You’re Hot”, huh? – and even forming circle pits… Positive energy from beginning to end. The Kamels were spoiled that night. A last-minute assignment from my friend and promoter Nico at Stoned Gatherings led me to interview the guys for the second time this year, not without any fun. After that rewarding gig, Kamel in Chief Thomas Brenna and groovemeister Stian Helle got all comfy in one of the Divan’s baroque couches, for a quick offbeat Q&A. The boys are back in town…

First of all, could you introduce Lonely Kamel in a few words?

Thomas Brenna (vocals & guitar): Blues, groove and a bottle of booze. That’s what it is!

Why is your new album « Shit City » so good that everyone should buy it?

Stian Helle (bass): Because it’s a great album! Listen to it five times… on the fifth time you’ll start to get it.
Thomas: There are a couple of songs that will hit you in the face straight away like « Shit City », « I Feel Sick » or « Freezing », and some other that are made to grow on you. That’s the sign of a good album.

What are the things that influence the Kamels, besides music?

Thomas: Collecting stamps, watching birds… (laughs)
Stian: I think Thomas is really into food and Lukas is maybe into castles and stuff… I’m into collecting records and making lists.
Thomas: Espen is the constructor, the builder.

He also destroys drums from time to time…

The new album is entitled « Shit City ». What is shit to you?

Thomas: Sometimes it can be really good, like « it’s the shit », like the crowd today. And sometimes everything is just shit, when nothing works.
Stian: Today was the shit, best crowd of the whole tour. People knew the songs, they were stagediving, they were all like « ah, this is what we need! ».

You told me that Lonely Kamel was all about blues, grooves and good booze… So what is your favorite drink?

Thomas: Rum and coke, all kinds of rums. It’s even on the rider, so we get a nice bottle of rum every day, that’s nice.
Stian: White Russian, even though I don’t drink it that much.

The Dude! (in our previous interview, Stian said his fave movie character was Big Lebowski)

Stian: Haha, I didn’t even think about that!
Thomas: Also, Lukas is getting more and more into wine these days, and Espen drinks… lemonade.

What’s the next step for Lonely Kamel as a band?

Stian: Expand our touring, play in Spain, Portugal…
Thomas: Be a support band for Metallica or something.
Stian: No, Metallica will support us, that’s the ultimate goal! (laughs)
Thomas: But yeah, I guess we expand every year, stone by stone. We didn’t get anything for free, we just drive around, paying it with our own money, going back home completely broke. But we’re having the time of our lives every time. So, getting bigger crowds and making good music, that’s what it’s all about.

Stian: You’re hot! (laughs)
Thomas: My girlfriend for ten years inspired this song, so it’s about her. At the same time, it could be easily transferred to any crowd.
Stian: Yeah, it’s like the « Shit City » song, it has a double meaning.

Like I told you before we started, I’ve read pretty much all the interviews you’ve done recently, and there’s this same question coming up over and over « what is a shit city? which city is it? ». I guess there can’t be one answer to this question.

Thomas: I guess every city can be pretty shitty. And sometimes every city is the shit, like Paris tonight. When we came up with the title, it was pretty shitty in Oslo at that time. When the snow disappears and everything feels like shit…
Stian: It’s the frustration of living in the same city for so long. We’ve had great times, we love Oslo, but this winter we were all like « fuck, we wanna do something else ». I think whether you’re in Paris, Göteborg or New-York, it’ll still be shitty… or the shit. Life is shitty!

The final word is yours, gentlemen.

Stian: We have half an hour? Ok, I wanna go against the government and politics… (laughs) More seriously, this place, le Divan Du Monde, is the coolest place we’ve ever played.
Thomas: It’s been really good to have amazing tour friends like The Order Of Israfel. They just started off, and they’re going to be a great band. They’re from Göteborg, which is like three hour drive from Oslo, so we’re going to keep in touch and have some good times together.