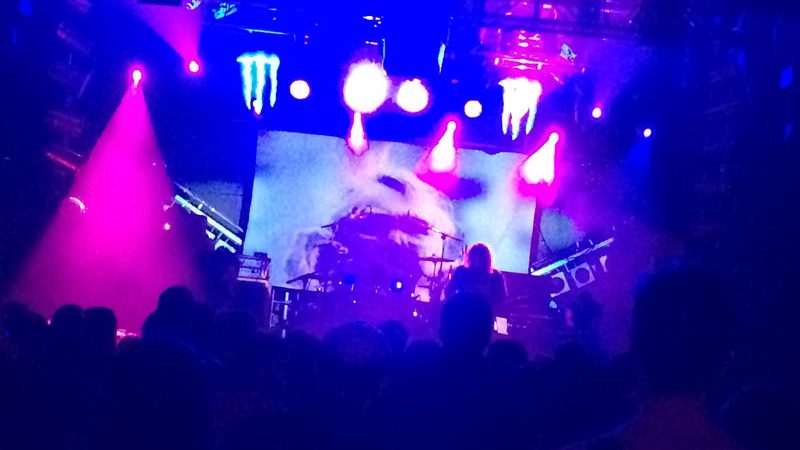 DESERTFEST LONDON : more than with any other festival, the 365 days that separate us from the next edition always feel like a lifetime. It should be said that stoner and fuzz addicts haven’t found better Mecca than this gathering in the middle of Camden Town, a one of a kind weekend when patch jackets and beards mingle with tourists, touts and street performers, all this in a very chilled-out atmosphere. Once again, Desertfest brought us a batch of epic performances, good vibes and rock friends from all over the continent. Let’s start this first day at cruising speed with SPIRIT CARAVAN, HORISONT, ZODIAC, SASQUATCH, MONKEY 3, SIXTY WATT SHAMAN, THE MACHINE, EARLS OF MARS and WINO.

As I landed in London the day before the official festival opening, there was noooo way I wouldn’t attend the warm-up show put on by local promoters When Planet Collides and Human Disease Promo at the Black Heart (the HQ!). This year, GURT, SEDULUS and MEGALODOOM are the bands invited to play the pre-show in front of a lovely crowd of insatiable stoneheads like you and I. After ordering a pint of Camden Hells, I settle myself by the bar upstairs to listen to the end of the MEGALODOOM’s set. As soon as my favourites GURT hit the stage, Gareth gives a shout out to “our French friends in the room” (the same French who were front row for their gig in Paris this fall, as well as for their performance at last year’s Desertfest). With their usual energy and positive attitude, they manage to take their very own mixture of groovy sludge and wacko hardcore moments to another level, as when they’re presenting that new song off their upcoming album “Horrendosaurus” (out on June 9th). Thumbs up, GURT! Next are the fabulous SEDULUS, a band I’ve never had the chance to see on a stage, but who was highly recommended by basically 99,9% of my friends. In the blink of an eye, they take us on a very heavy yet captivating trip, with hypnotic bass riffs vibrating across the room and guitars responding to each other in a doomy yet exotic vibe. This is one awesome discovery I just made tonight, and if you don’t know them yet, just watch this short footage I made and be your own judge. To end this cool warm-up night on a yummy note, we decide to treat ourselves to some fresh-made pizzas at the White Kitchen on Camden High (£5 for a large pizza made of fresh ingredients only, now that’s a deal!). Now time to go to bed and get ready for D-Day! 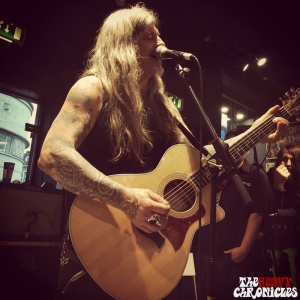 After enjoying an early American breakfast and doing some researches for my interviews, I decide to simply go easy on today’s gig schedule. First appointment is then set at 4PM with Daddy “Scott Weinrich” WINO at the Vans Store. Arriving early allows us to be front row, while dozens and dozens of people are still trying to get into the already packed store. Fifteen minutes, thirty, then fourty… Wino finally shows up and starts his set. Despite my position of choice, I must admit the wait added to the store’s bright lights prevent me from getting ‘into it’. This is the moment when I choose to leave and run to the Black Heart to catch the ultimate riffs of THE EARLS OF MARS. As soon as I get in, I’m hit by a wave of raw energy and kind of bemused by some lyrical synth sounds. I make my way to the front and come face to face with one hell of a thrilled frontman… Revolution is in the air, and good vibes are flowing across the room, bringing a smile on everyone’s face and definitely helping people – like yours truly – to wake up for good. That’s a shame I arrived too late to enjoy more than one song, though. (VIDEO) 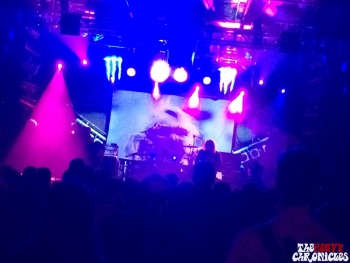 After a quick reunion with 3/4 of the Steak family over a glass of Coke (I said I’ll go easy, didn’t I?), I get to the Ballroom for MONKEY3‘s very own cosmic celebration. Aaaaah, how I missed this venue and its army of security guys who always search you and scrutinize you with that hostile look of theirs… As I walk inside the venue, the Swiss foursome has already taken the audience into the cosmos with their mystical stoner anthems and subliminal video projections. This is my third time seeing MONKEY3, and it is once again a new experience: the first time, I discovered them at Les Combustibles in Paris and was left completely awestruck, like swallowed into the void ; the second time, my drunkenness allowed me to enjoy them only as a background music (not too bad for background music, hey?) ; today, I’m getting smashed in the face by their awesomeness, and finally understand why everyone praise this band. As a friend of mine said, they’re some kind of “Jean-Michel Jarre for metal” (a pioneer in French electronic music, the first guy to ever put on stunning open air light shows in the late 70’s), and that’s precisely what makes them unique. Standing ovation: deserved.

ON THE ROCK’N’ROLL HIGHWAY

After such a show, there’s nothing better than fresh lager! I head to the central bar – a mysterious place where you’ll find approximately ten barmen/maids standing, but only three of them would be actually working – to order a Red Stripe, because beer cans are definitely handier when it comes to headbanging, and this is what I planned to do next. The first time I really got into SASQUATCH was when they were officially announced to play Desertfest. It took me one listening of their record “IV” to be won over by the Californian trio. To be honest, they’re not disappointing today, as the freshly formed moshpit can tell. The trio’s heavy rock has a swagger of its own, and Keith Gibbs vocals are really clean and powerful… They don’t need any frills to make the crowd enjoy the ride. And what a cool ride it is!

After this highly electric appetizer, I’m once again putting on a sprint and slaloming amongst Camden’s slllluuggish tourists in order to catch the tail end of SIXTY WATT SHAMAN at the Underworld. After I got my wristband quickly checked by the security (these guys are so cool compared to the Ballroom’s assholes), I enter the darkness and mingle with the compact audience, which is massively headbanging to SWS’ redneck heavy rock. This band is really imposing sonically speaking but also very charismatic, whether it’s their giant frontman – who could easily double Phil Anselmo when he’s too wasted to sing “Stone The Crow” properly – or the musicians. Bandana bass player Rev Jim can’t stop exciting the front row, while the drummer gets on his feet every thirty seconds with a big smile on his face. I think there’s no better term than “ballsy” to qualify these guys’ vibe.

LET THE WHEEL OF TIME BE ROLLING 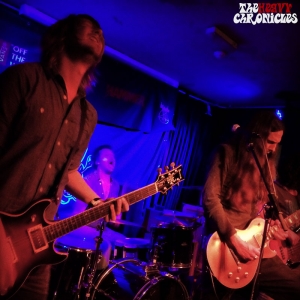 After I was informed that my buddies THE MACHINE would play their set after SPIRIT CARAVAN at the Ballroom because of a few delays during their travel to London, I don’t think twice before heading to the Black Heart and enjoy a pure moment of 70’s hard rock. Don’t ask me why, but I was convinced I would find Dio’s Swedish hidden son (i.e. Horisont’s singer) when entering the room… Instead, I find a German handsome version of Mark Lanegan: ZODIAC is in the house! And damn, the foursome is appealing in many ways. ZODIAC is definitely one of the best finds of this festival, with their classic rock touch, far from the revival concept defended by their Swedish cousins. Their music is smooth, but it also smells like Bourbon and dust. Oh, and THAT voice, man… They’re just amazing, period. (VIDEO) 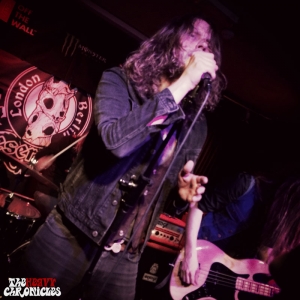 Time for a bit of change with HORISONT: hailing from Sweden, this 70’s tornado doesn’t spare anyone and a tidal wave of headbang takes hold of the first rows, while the five northmen in their bell-bottom jeans hammer their instruments with strength and conviction (VIDEO). Their energy is contagious, everyone’s smiling, this is for sure the first real rock’n’roll party of the weekend. Exhilarating. Even though I’m totally enjoying the moment, I retreat to the back to take a breath and hydrate a little bit. Hey, aren’t Wino and his boys calling right now? For the third time today, I find myself being searched by the Ballroom’s security, whether it’s my bag, pockets, wallet, everything. I mean, of course: stoner rockers are known for being fucking terrorists. I don’t even consider hanging out in the photo pit with my shitty hybrid camera and about fifteen photographers jostling right now. As I’m not a long-time fan of SPIRIT CARAVAN, their gig seems a bit long and linear to me, despite these three doom gentlemen’s firepower. However, an event gets me out of my torpor, when Henry Vasquez – who’s filling in after Gary Isom quit the band a month ago – smashes his snare drum and leaves the stage for like five minutes to fix the problem. A real brute on drums. No no no, actually: he’s CRAZY. Anyway. My heart finally skips a beat when the band starts to play a cover of Grand funk Railroad’s “Inside Looking Out” (I loooooooooove this song!). Pwned.

As promised, Dutch stoner rockers THE MACHINE are next. The crowd is a little bit reduced at this point, but everyone’s already het up by the previous heavy bombing. The first thing I notice when the boys hit the stage is that Hans, the bass player, has a GoPro camera strapped around his head… So them! Being as tired as I am prevents me from really enjoying their gig, but I’m still really happy to get all those good stoner vibes in my ears, until the ultimate riff of the night (VIDEO). The Desertscene Opening Party that was supposed to ensue can’t take place because of the late schedule, that’s why we’re all heading to the Black Heart for a last pint (well, at least for those who weren’t turned down by the inflexible bouncers). The last call for booze echoes in the pub, time for us to wave goodbye and head to the hostel, in order to be fresh for THE big day. Nighty night, Camden… 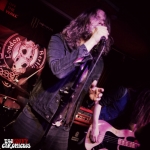 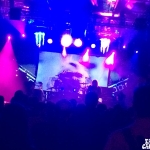 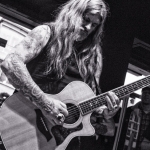 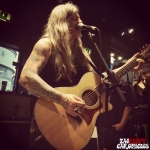 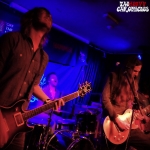 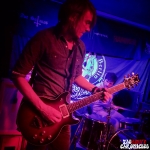