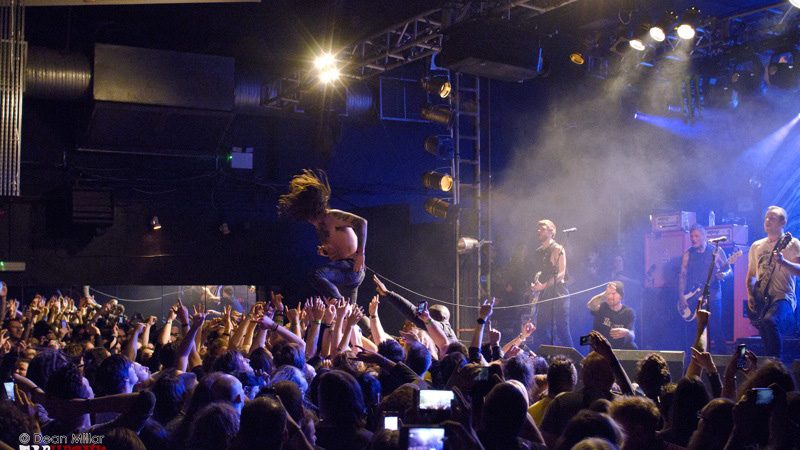 Like many people, the second day of DESERTFEST LONDON was the one I was looking forward to the most. Owing to a slightly busy schedule, I decided to focus on the Electric Ballroom and its main headliners KVELERTAK, WEEDEATER, ASG, SAMSARA BLUES EXPERIMENT. It was by far the best decision I’ve made, considering these bands provided some of the best performances of the whole weekend. Proof below. (PHOTOS : Dean Millar)

CALL ME THE THATCHER OF STONER

Do you think you can have a hell of a rock’n’roll time and avoid the excesses that come with it? Well, sort of… Awakening this morning isn’t as hard as I expected, which is good news as I have tons of gigs to attend and a couple of interviews to run. After a full breakfast and a pleasant interview at Brewdog Bar with Wolfshead’s guitarist Mart, I head off to the World’s End to meet Mr Dean Millar. Dean Millar will be T.H.C’s official photographer for the weekend, and he’s also known for playing bass in Uncle Acid & The Deadbeats. Basically, he’s saving my life. As soon as we meet up, we both run to the Ballroom for our interview with Jason Shi of ASG – that dude is cool, the old school surfboy kind of guy (read the whole interview here). A lightning trip to the hostel later, I catch the end of ANCIIENTS‘ gig, which turns out to be the most violent, crushing and deafening ten minutes of my whole weekend. Never such a sonic chaos has been so nicely packaged: these guys are really mastering the art of shredding (and I think they also invented the “art of loudness”), it’s insane. Eardrums are instantly destroyed for miles around. 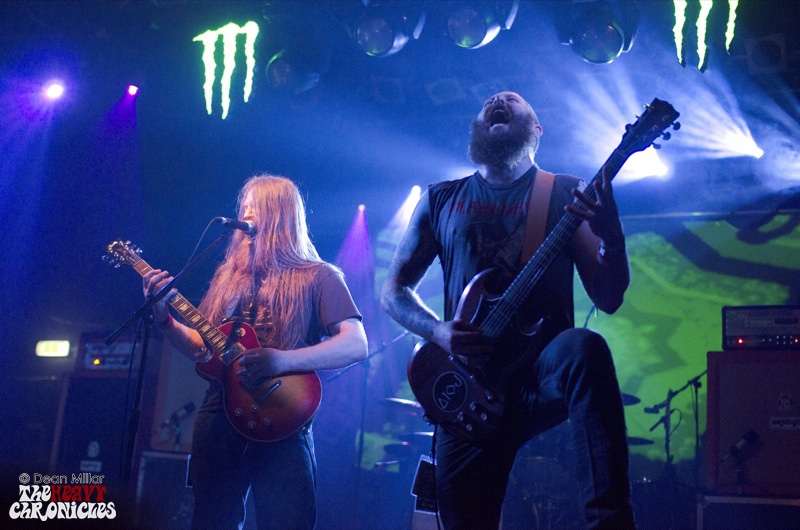 As soon as the gig is over, Dean and I go meet Weedeater at the back of the venue. The mere idea of interviewing Dixie Collins is making each cell of my body boil like crazy. The man may have a good reputation among the press, he’s still kind of imposing. In the end, Dixie proves to be a super nice guy with a great sense of humour (read the whole interview right here). Well, this day is starting under the best auspices!

CLIMBING THE MOUNTAIN OF HEAVY Finally, here comes the time for the mighty ASG to tear down the Ballroom. ASG is one of the bands I really wanted to see this weekend, it must be said that they’re one of the best “4-wheeled heavy rock” bands around. The guys are all smiles when they’re taking over the big stage in front of a crowd that is obviously already won over (if you catch my drift). The band delivers “Win Us Over” best moments, as well as a couple of killer tunes off their last album “Blood Drive”, all that being performed in a very friendly atmosphere and with a super clean technique. At some point, Jason announces that this is the last show of the tour, and that they couldn’t be happier to end it at Desertfest London. By causing levels of endorphin to reach peaks, ASG please their long time fans and puts all the others in their pocket. Yep, today officially got off to a roaring start. (VIDEO)

After a short falafel break, I get back on the run to see those Germanic Gods we call SAMSARA BLUES EXPERIMENT. For the fourth time in a few hours, I get searched by the Ballroom’s security while cracking a “c’mon maaaan, it’s me!” grin that obviously doesn’t make the Spartan army smile. At all. When all of a sudden, I hear the sacred riffs of my stoner princes from afar, and squeal like a 14 years old fangirl – which immediately unsettles the enemy. It’s called “the Samsara effect”. Since Richard Behrens is currently touring the US with Kadavar, their guitarist Hans Eiselt is filling in on bass for him, and well, he’s doing brilliantly! Consequently, the band only plays songs off the first two albums, however, they decide to treat us to an exclusive performance of their 22 minutes long track “Double Freedom”. Christian Peters looks plainly moved by the amount of people in the room and most of all, their enthusiasm: indeed, I think I haven’t heard that many declarations of love – mostly coming from men – at a stoner gig! There aren’t a thousand bands who are able to drag us into such beautiful sonic trips, and this is exactly what makes of SBE such a popular act among the psychedelic rock fans. Too bad the gig ends almost fifteen minutes earlier, because we were all up for more.

WHEN DESERTFEST CRUSHES YOUR FACES…

Since doom supergroup 11PARANOIAS (featuring members of Ramesses and Bong, no less) is now playing at the Underworld, it would be stupid not to enjoy a bit of it. As I expected, the venue is packed and the band has already launched a massive campaign of face-melting. Unfortunately, I find the performance quite flat and, let’s say it… boring. Sorry for not being really objective here, but nothing happens, neither on stage nor in my mind. And as I can’t see s**t, I decide to go back where-you-know. From the very moment the WEEDEATER logo is projected on stage, you can feel the excitement growing in the venue. So when Dixie Collins, Dave Sheperd and Travis Owen – who now replaces Keko on drums, and is also part of southern noise outfit Whores – hit the stage, it feels like they’ve been looooong-awaited by the Desertfest crowd. I mean, everyone gets insane! Just so you know, Weedeater live sounds as if King Kong has just smoked a massive bong and decided to stamp on our pretty mugs, for fun. And as if Weedeater’s music wasn’t epic enough, the band also puts one a hell of a fucking show. You can see three different entities on stage: Sheperd, placid yet powerful; Dixie, tripping his balls off while still being a real crowd leader (do you know many guys you would applause after they just called you an “asshole” while waving a bottle of Jim Beam?); and the inimitable and superhuman Travis “Crazy” Owen. Owen deserves a paragraph of its own, inasmuch as he puts on a real “metal circus” show, hitting drums like a motherfucker, doing this constant stick-twirling and kicking snares with his feet, with the smile of a kid who managed to ride his bike without the training wheels for the first time. “Monkey Junction”, “Mancoon”, “Jason The Dragon”, “God Luck And Good Speed” : classic tunes are flowing, and hell yeah, it feels good! Everyone in the pit has gone apeshit, so imagine when the band invites Wino on stage for an encore… Words are useless.

When you just saw one of your favorite sludge bands putting a smile on the entire population of the Ballroom, you just need one thing: drink a beer. Do the maths: a slap in the face =  a pint. Looking at what’s next, we’re all gonna end drunk. As usual, KVELERTAK make a masterful entrance with their berserker frontman Erlend Hjelvik sporting his fabulous owl headdress. The rest of the team seems to be in great shape too, given all the smiles they’re exchanging. 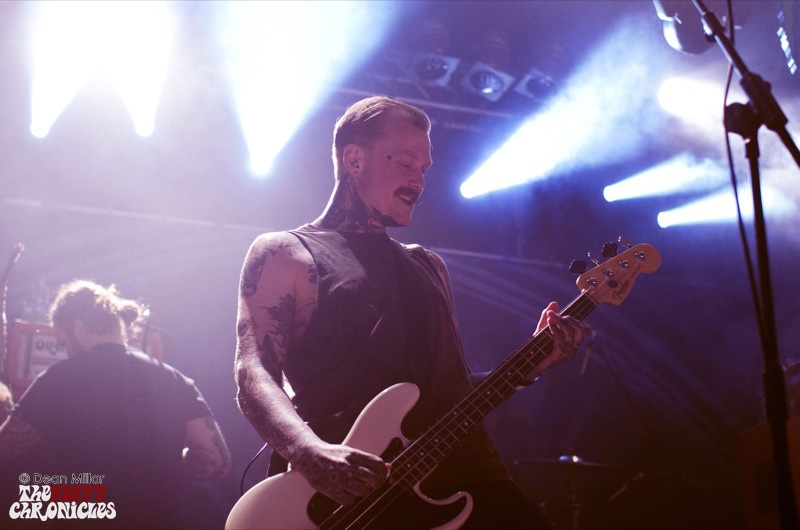 With a fair amount of tracks from both “Kvelertak” and “Meir”, the band is tearing the Ballroom into pieces. Each and every one of us here cuts loose. On the spur of the moment, Marvin Nygaard – see above – tries to make his bass spin around him, but the latter comes off its strap and lands backstage. Two of the guitarists burst out laughing, while keeping on blasting their riffs: nothing can stop Kvelertak. Desertfesters are in a trance, pogos and crowdsurfers are legion, Erlend Hjelvik even decides to dive into the pit… ending up walking on the crowd like a Norse Moses of metal, like a warlord carried by his army. By Thor! 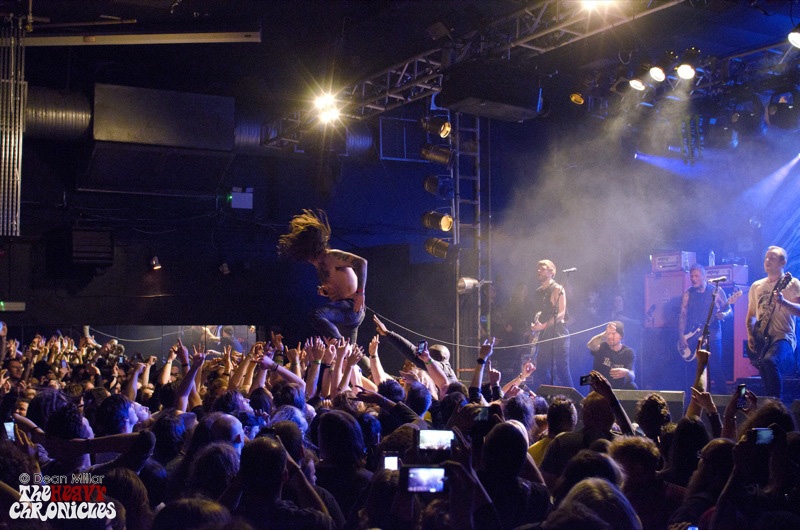 Let’s be clear, “quietness” and “Kvelertak” are two words that really don’t go well together. And if none of us really understand what their lyrics actually say, everyone will attempt to singalong on “Bruane Brenn”, “Ulvetid”, or during Maciek’s screaming part on “Nekrokosmos” (don’t pretend like you’ve never tried, we’ve ALL tried). Party anthem “Kvelertak” is the latest song of the gig, but the Desertfest crowd ain’t no fool and starts to chant the band’s name, until they come back and bring up the epicness one last time. If Kvelertak has become so popular within only a couple of years, it’s just because they form one of the BEST FUCKING LIVE BANDS IN THE WORLD. And if you disagree, well, knulle deg. 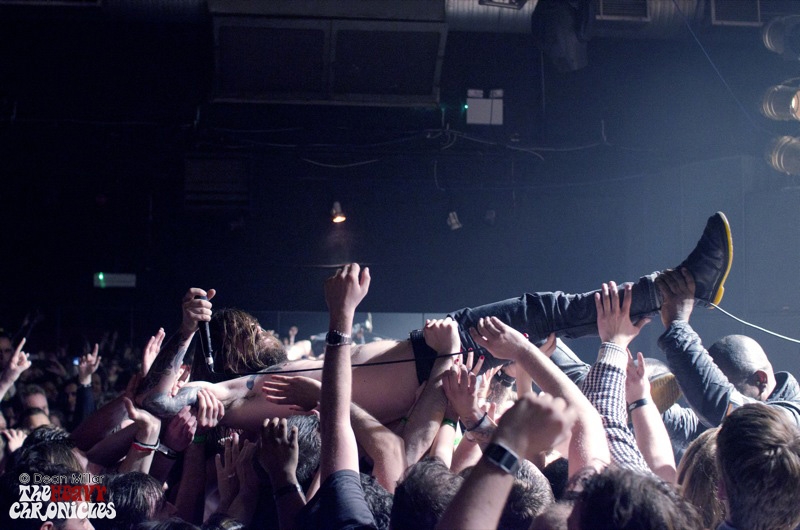 As soon as the gig is over, my French mates and I head to the Underworld for the biggest afterparty of the weekend, hosted by our Desertfest heroes DJ Harris and Kippa. Boom! Desert and stoner rock classics keep coming, but at no time we get bored: beer is flowing, everyone’s dancing, screaming, jumping around, the whole attendance sings along when “War Pigs” is blasted in the speakers, DJ Harris – or should we call him “Super Nacho”? – is so thrilled that he even attempts to stagedive with barely twenty people to catch him… THIS, is real life. Beyond all the amazing gigs and people, the afterparties have always been the icing on the cake at Desertfest. It’s a place where brothers and sisters of Heavy are all united, a place that makes us feel like the world is ours. Stoneheads and doomheads are all love, man. I’ll leave you on this merry note, before knocking you out with the very last part of this crazy report. “Generals gathered in their maaaasseeeeees, just like witches at black masses…”