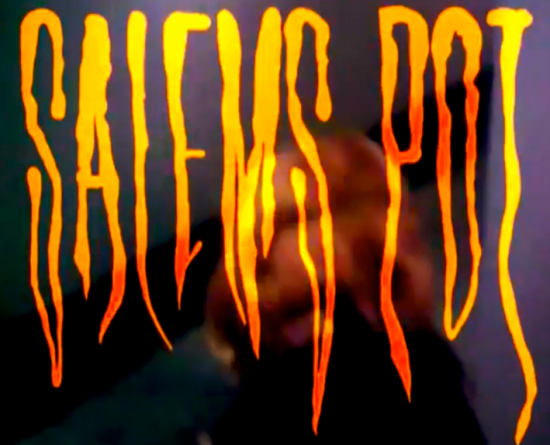 UK’s patron saints of doom CONAN are back, and trust me that arses are gonna be kicked all over the world. Needless to draw you a picture: the sound is huge, crackling, blazing hot. This video is beyond epic, with its lovecraftian style and fucking brilliant 3D aesthetics. Seriously guys, it’s 5,16 minutes of drone eargasm. CONAN don’t do things by half with this first excerpt of their awaited new record “Blood Eagle” (out via Napalm on March 3), casually putting under pressure all the contenders to the “heaviest band of the decade” title. Even Cthulu peed his sucker panties, it goes to show!

Just about the same time ELECTRIC WIZARD announced their great return among the living (or so), another offspring off the occult asks for some recognition. Riff + Satan + lust + weed + sacrifices + riff + fuzz = SALEM’S POT. After I’ve listened to this killer tune almost thirty times in a row, I can only recommend you to turn the volume at its maximum and enjoy the filthy grooves of this new Swedish outfit. UNCLE ACID & THE DEADBEATS better be bracing themselves, because it doesn’t seem like they’ll own the crown of sexy addictive stoner riffs for long now. “…Lurar ut dig på prärien” will be out on April 24 through Easy Rider, can’t wait.

“Sit back and watch the butter baby come alive“. Here’s what FIGHT AMP tell by way of introduction to their new video (off their latest album “Birth Control”, released in 2012). The live footage part is pretty rad, but the animated part with the butter druggie monster is… well, quite cool too, so to speak! Philly’s most outrageous combo stay true to their assertively mad rockers image, which makes me want to see them fill our ears with their noise-sludgecore (without butter nor vaseline) anytime soon on a Euro tour.

After their phenomenally successful return at last year’s London Desertfest, it was quite obvious that Lowrider wouldn’t call it quits. Once again invited in London by UK promoter Desertscene, the Swedish foursome turned this one-shot performance into a sonically powerful and extremely touching moment of rock communion. They offered us their classics as well as a few new songs (yes guys, a new record is due out this fall!!!), and an unforgivable song featuring mister Tommi Hollappa of Dozer on guitar. The 500+ Londoners went hectic, the band seemed more than happy to be here, and the gig was simply… epic. It felt just like they haven’t left us since Desertfest 2013, as if they were home in London. Their gig at Hellfest on the Sunday is absolutely not to be missed.

After the oh so festive and Graveyardian song “Some Kind Of Sorcery”, THE SOCKS just put out a second video off their upcoming eponymous record (due out March 18 via Small Stone Records). This one offers a darker and more introspective sound and atmosphere, which proves once again the band’s creative range is wider than it seems at first sight. Oooh, I can see a pretty cool review coming up for this record…

The underrated AKÛMA have so many good things to offer. This first black and white video is minimalistic enough not to steal the show to their five minutes long post-metallic instrumental. “Less is more” said the sage: AKÛMA applies the saying to the letter…

To end this incredibly rich week in video, here’s the new SCORPION CHILD, which shamelessly borrows all the codes of QOTSA’s classic “Go With The Flow”. We don’t blame them for that, as they do it well and manage to put out a wholly delightful video… RAWK’n’RAWL, BABY !