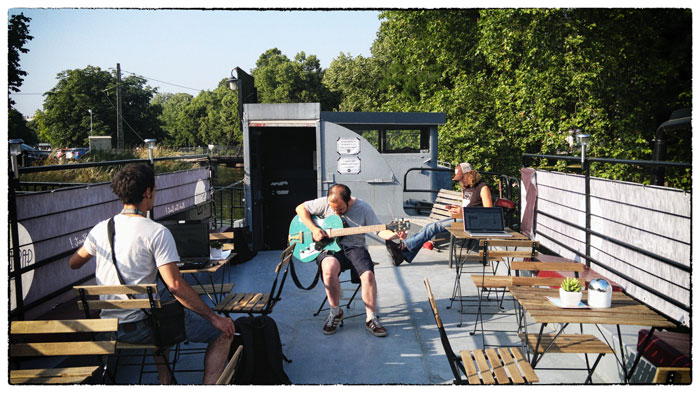 For the second time this year, I was called to join MARS RED SKY as a merch girl/driver for the northern part of their summer tour. The plan was to depart Bordeaux to strike Lille, then have some fun in Berlin and end our course at Days Of The Ceremony festival in Poland. So this is not the regular live report, but more a bloggy diary full of stupid details and shitty pictures. Because in the end, everyone wants to know how’s the life of a touring band. “Keep your eyes on the road, your hands upon the wheel”…

We take the road after spending the night at Matgaz’ (our dear drummer) in Angoulême. The sun is shining, the mood is great, we feel like five superheroes. Going to Lille is already a seven hours drive, so this is the best way to test our stamina for the rest of the trip. Philosophical debates are bound to happen, like for example when the guys are trying to find out the best way to “carry” Beth Ditto from Gossip on stage. After we pass the ring road’s traffic jam, we arrive to La Péniche. Yes guys, tonight Mars Red Sky is playing on a barge, next to a very green promenade full of Sunday joggers. Chilling out on a boat, that’s how we roll. 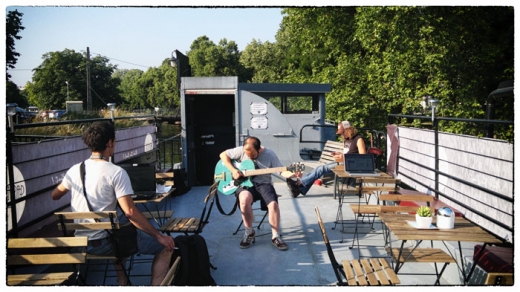 Tonight is the second part of the venue’s “Stone The Boat” nights. I’m told that Acid King performance last night left many people cold (funny, when some friends in Paris told me the exact same thing a few days earlier). According to the same source, Pet The Preacher’s frontman was one of the most valuable reasons to attend this gig. Honestly, I don’t get why… However, all you have to keep in mind is that Mars Red Sky’s “Voodoo/Black Sabbath/Vino” set is about to give a psychedelic lesson to all our Northern friends out there. For their own good. 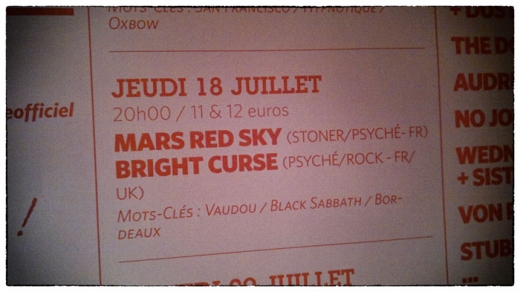 While Bright Curse are doing the soundcheck, the crew gives us vouchers for the food. “Do you mind eating burgers ?”. After they tell us these are homemade burgers served at a food truck, we don’t have any objection. If I’m making a meal of this burger thing, it’s because it’s probably the best thing I’ll eat this weekend. Hmmm, the “Lambert” : fresh onion mince steak, crispy bacon and tasty blue cheese… Absolutely delicious. 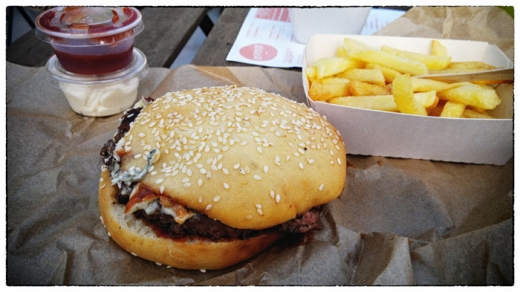 The doors aren’t open yet, yet many people are already having a cold one on the boat’s upper deck. There might be around sixty people for the opening band Bright Curse. I loved their EP (reviewed here), but I think it lacks this little something that make the live performance take off. In their defense, the band was founded only a year ago and they haven’t toured enough to find out their own live “texture”. However, we’ll see them at Glad Stone Fest 7 in Paris this October, after their first UK tour with local fame Trippy Wicked. Oh by the way, did I tell you I had a cold one with the “French Fries King” and Romain from Bright Curse ? 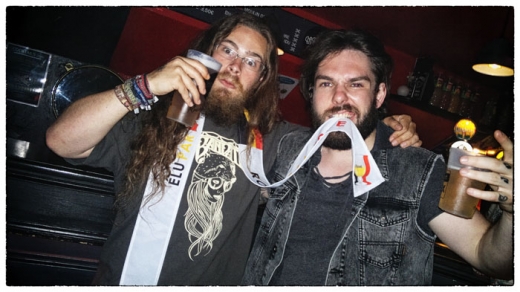 When Mars Red Sky takes the stage, it’s a total different story. Their reputation among the stoner rock scene is well-deserved, because they’ve managed to create a very unique sound signature over the years. It’s crushing yet orgasmic. Always super powerful. Lille’s crowd is a bit languid tonight (it’s probably because of the heat). Jimmy intends a pun by telling them we also have a “serial pusher” in Bordeaux, some guy who pushes drunk people into the river. They don’t get the pun, they’re puzzled. But the Lillois are very welcoming people anyway, and meeting up two members of Glowsun easily confirms that feeling. After a warm leave-taking with the Péniche’s crew, we head to the hotel for a vital night of sleep.

9 AM, time to have a warrior’s breakfast to hold out the seven hours drive to Berlin. Bruce Springsteen and Steve Earle are our road buddies. After we have crossed the German frontier, not only there’s no speed limit on the Autobahn, so driving at 140 kms/h is considered as SLOW by the German, but cutting in other drivers and untimely braking seems to be required here. So we didn’t imagine for sure that we would get stuck three hours and a half in traffic on the Autobahn with no way out… 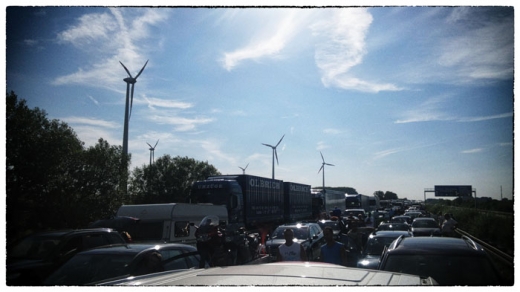 While French people would start honking nervously and cursing, the Germans are acting cool. They get out of their cabriolet to have a chat with other drivers, cool. In the van, the guys just had the brilliant idea ever : creating a blog called call “Shit and Teeth” (“because everything’s edible in pig, except the shit and teeth” says Matgaz) where we would only review lame records (patented concept). After what, we’re getting through three steps.

1. Bullshitting. We’re making fun of the people around.
2. Boredom. We turn on the radio. Katy Perry is screaming. We just reached the critical point.
3. Absolute boredom. 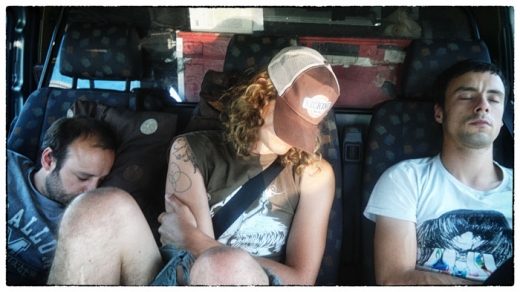 After 3 hours and a half, the traffic finally starts to flow. It’s 9 PM, we should have arrived at the venue an hour ago… I feel like Jason Statham in “The Transporter”, driving at 160 km/h on the last 180 kilometers to finally make it to Das Hotel in Kreuzberg, Berlin. It’s pretty crowded but people doesn’t seem mad at us for being so late, everyone’s chilling out and having drinks outside. 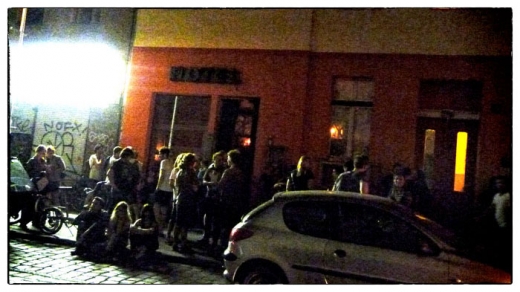 The bar staff gets together and helps us to unload the van as fast as possible. The venue is a small cellar with candles everywhere, fucking occult, I like it. I meet the staff which is almost made of Spanish peeps. Shout out to Jordi, who gave me a hand at the merch. 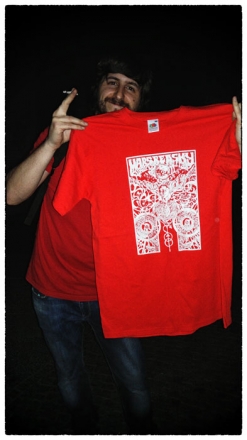 As soon as the guys start playing, dozens of people are rushing into the room and instantaneously start to headbang. The mood is very different from yesterday, as people are really into it, they know Mars Red Sky and they’ve been obviously awaiting the band for ages (last time they played was in May 2012 at the White Trash). There’s something doomier in tonight’s performance, which is mostly due to the presence of “Falls” on the setlist. Here’s an insight of the mystical atmosphere…

The gig ends around midnight and the venue empties out within a few seconds. It might be around 35°C in here. After having a delicious pizza on a square nearby, we head to our American hosts’ flat in Prenzlauer Berg neighborhood.

After a five hours nap, there’s no way we would waste more time if we want to get in Warsaw on time. I can tell the slow rhythm on the Polish highway is very frustrating when you drove fast as a motherfucker the night before. Germany definitely gave us bad habits… Let me unveil something about the life on tour : people tend to think that touring is like being in holidays, sightseeing, and seeing nice landscapes. Well, they’re wrong. When you’re doing a small but intense bunch of dates like we’re doing now, with one gig a day and hundreds of miles to drive, the only three things you actually get to know are : the highway, the gas stations, and the local food/beer. Yeah, Polish gas stations FTW… 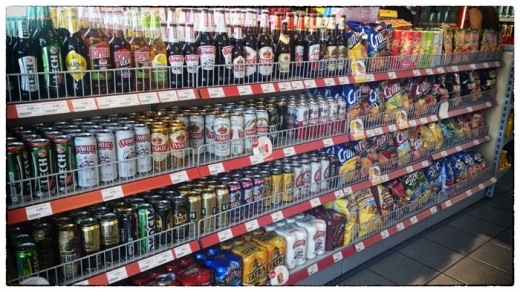 At some point, we manage to find food, so to speak. Wanna know what’s the typical meal in Poland ? The kotlet chabowy. It’s some kind of breaded meat served with cabbage salad and fries. Depending on the plate, the meat is more or less grayish… According to the forecasts, Jimmy has twice less chances to survive whereas I will make it with slight stomach cramps. In the end, we all survive the kotlet and magic even happens while we’re leaving the highway : still devoid of a map or GPS, we make our way to the venue thanks to Jimmy’s sixth sense. It’s 5 PM, we’re right on time so that the festival’s technical crew can quickly take charge of the gear and the merch. I have to say they’re as nice as they’re efficient, and the atmosphere here is REALLY cool. 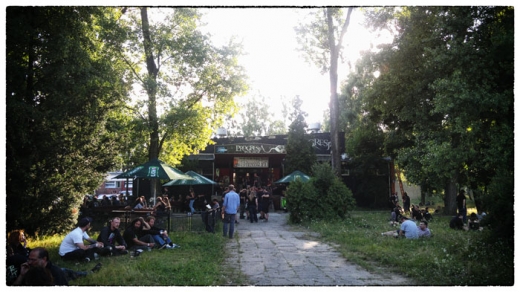 Once I’ve set the merch table, I take my breath and watch a few shows. I totally fall in love with German psychedelic band Samsara Blues Experiment. I can’t help but staying, this band is way too captivating. I mean, these fifteen minutes long cosmic blues jams, Christian Peters’ totally Hendrixian voice… I’m blown away by this wonderful foursome. I don’t know what else to say, this band is amazing. Watch and tell.

It appears that every time Mars Red Sky played in Poland, the crowd always chanted “Mars Red Sky ! Mars Red Sky !”. Tonight, when they take the stage, the crowd first rewards them with very shy applause (it feels like we’re attending a tennis game at Roland Garros). A dozen of photographs are snapping away at the stage, which makes my filming attempt harder. Julien Pras Superstar ! 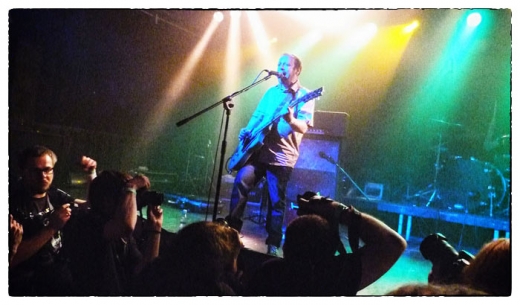 After two or three songs, I go back to the merch to welcome the fans who are throwing themselves on vinyls and tee shirts. From the distance, I finally hear the people chanting “Mars Red Sky ! Mard Red Sky !”. It looks like the shy audience has turned into a proper rock crowd !

I have to admit that Acid Kind‘s performance doesn’t convince me much. I find it quite repetitive, moreover it’s time for dinner backstage. Time for some kotlet chabowy (this one really deserves five stars compared to the one we ate on the highway) ! Pentagram is next on the bill, and although I’m not a huge fan of Bobby Liebling, this band is nothing but a fucking bulldozer on stage, it’ll rip up everything. Matt Goldsborough, Greg Turley and Sean Saley are such war machines, they’re legends. Pentagram ? They don’t have A sound, they are THE sound. Boom.

To end this night at Days Of The Ceremony, here is the band I absolutely wanted to see at this festival (because I missed them at Desertfest 2013) : BELZEBONG. With such a name, needless to explain thoroughly what they’re about. “Doom and weed” will do. Indeed, doom and weed are the thing, because when these guys show up, they don’t need to say a damn word to the crowd. They’re just blasting super heavy occult riffs and headbanging their long manes up and down, that’s all. They don’t need a light show or metal gimmicks, because they’re a freaking heavy and terrific live act. All hail the bong…

After having breakfast at the same time as Pentagram and Pet The Preacher at the hotel, we hit the road again, heading back to our hometown Bordeaux. A 24 hours drive, I think you can’t top that. Anyway, Days Of The Ceremony festival did worth the trip and fatigue. Next episode of the “On the road…” series at the end of August, with the southern part of the tour : Aug. 23rd (Vitoria, Spain), 24th (Leon, Spain) and 25th (Sonic Blast Festival in Moledo, Portugal). To end this post, I let you enjoy Matgaz’s ultimate driving playlist :

One month without playing Tetris, I’m gonna miss that… 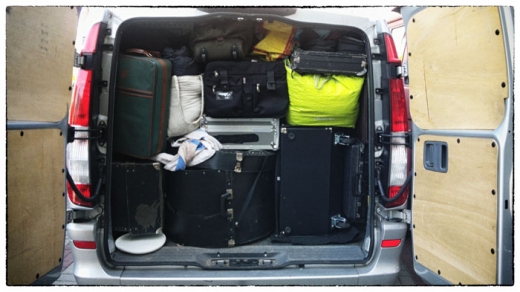