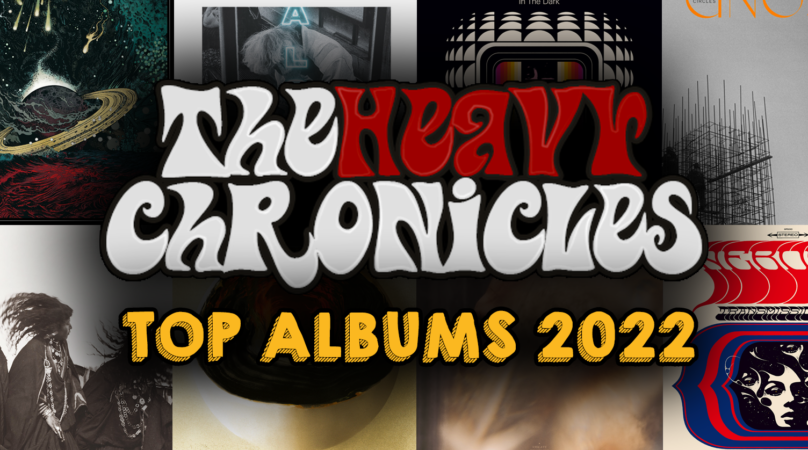 The Heavy Chronicles team delivers a fine-tuned selection of sonic treats to fill your earholes during this festive period. There will be fuzz, there will be heavy, but most of all, there will be DIVERSITY in our yearly picks, as you can expect from our team of experts!

These relentless travelers of the European stages (even after a massive car crash in October) are embracing the concept of pilgrimage like no one else. Drawing from Mediterranean instrumentations and oriental tones, Messa takes us on a journey to a bigger yet no less anguished world throughout 64 minutes that are equallythrilling, devious, haunting and perfectly balanced. Their adventurous doom stays on the edge of sophistication and simplicity, while constantly keeping us close to their experimentations. All that fully magnified by Sara Bianchin’s sublime vocals.

Solidity and consistency are words that come to mind when contemplating Elder’s discography. The 2022 Elder hasn’t changed its DNA but keep nurturing to make it grow a little bit further. On their 6th full-lengthe, Nick DiSalvo’s band are playing better, singing better, producing better, as if years haven’t taken their toll on them. These five lush and electricity-filled tracks are simply a goldsmith’s work or a grower quite simply. Towered by the excellent “Merged in Dreams/Ne Plus Ultra” that piles up melodic layers and riffs with incredible maestria.

This might not fit the editorial line, but with such an album title and cover art, you can’t deny that the stoner-doom spirit isn’t there. “Iron Lung” brings its share of distortion throughout a 9-minute long medical-psych trip that is an absolute emotional rollercoaster. Besides, this jam-driven album based upon exploring seven musical modes (Ionian, Dorian, Mixolydian, etc.) is both less prog and messy than its concept suggests, delivering seven epic tracks on which you won’t help dance or perform some air guitar. This is the band’s 21st opus and they have released two more since this one, so who’s going to stop them?

More openly jam-driven than their previous effort, this album is comprised of two massive sonic pieces as expected with Earthless. This time around, Earthless pays tribute to Japanese 70’s hard rock (Shinki Chen’s “Speed, Glue & Shinki”), with a title track built around a towering climax, and evoking Japan’s own yōkai in a deluge of tom drums reminiscent of ritual percussions. This utterly mesmerizing track builds up a crazy pressure that’s just waiting to explode, which it inevitably does. The second track “Death to the Red Sun” is also a hard-hitter, summoning once again the trio’s cosmic delusions. An album stands as yet another milestone in their career.

The melodic and rhythmic mille-feuille is tight as ever. Dense and powerful, the sonic magma is made of iron: Russian Circles has decided to take no prisoner with “Gnosis”. This isolation recording produced by Kurt Ballou is packed with dull rage, betraying a desire to make one and become more than the sum of its parts again. The riffs are tense, drawing from death to black metal, and drums are plundering relentlessly. “Tupilak Conduit” and “Betrayal” are among the most extreme songs that the band has ever crafted. Then comes the “Bloom” finale, a lighter track and way out for this awe-striking monolith that reminds us that the light is at the end of the tunnel.

Sonically, Ken Mode could be described as the soundtrack of the Underworld’s wrath or the collapse of our civilization and Humanity’s psyche after these bloody years of physical and psychological isolation. Many people did not survive these ordeals and KEN mode could have been one of them, but as often with these warriors, they chose to die standing. “Null” is the outcome of this battle and it certainly does not spare listeners who weren’t ready for it. Album of the year, without a doubt!

Despite being super consistent all the time, Membrane still hasn’t been acknowledged as one of the best post-metal bands around. Yet “Beyond Your Beliefs” proves once again that the French are worthy of praise, as their music is overwhelmingly powerful and the quality of their songwriting gets sublimated by the foursome’s interplay. Their late guitarist Mathieu Roszak must be damn proud of his friends! If you had to buy one post-metal album this year, this is this one!

In the hardcore department, finding an inspired album that is well-executed and doesn’t fall into the same old pitfalls had become more complicated than the quest for the Holy Grail. This is when “Excide” decided to put an end to this quest by throwing us “Deliberate Revolver” in the face, 11 bangers of the highest order, the kind I had not heard since Snapcase’s hiatus. Excide will have you jumping up and down from the ceiling and throwing yourself in the pit with a smile on your face. Watch your teeth though…

How would the offpsring of Devo and Sleaford Mods sound, if the Stooges were Mancunians and punks fucked with the princes of the dancefloor? Well, you got Dez Dare! Who else than a band from Brighton could blend and sublimate all these genres so brilliantly, while delivering a sheer collection of hits? “Ulysses Trash” stands as the return of wild and hip-swaying rock making us singalong at the top of our lungs while digging the moment like never before. England is and will ever be the land of rock’n’roll!

Although the Parisian continue their sonic explorations with high standards of quality, they also keep dividing some of their listeners and critics alike. Yet, rarely have I heard such an emotional mastery when it comes to enhancing the heaviness of their songs, and I also certainly did not expect “A Loner” to reach such heights! Hangman’s Chair has developed an identity and a sound of its own, proof that the band has been able to pave its own way without worrying about factional squabbles.

Also recommended: Jack and the Bearded Fishermen “Playfull Winds”, Made of Teeth “Sociopathogen”, Cult of Luna “The Long Road North”

The unexpected album of a band that is still mourning their lost friend, torn between going on hiatus or keeping going. It was merely impossible to imagine a follow-up after the death of bassist Caleb Scofield in 2018. For many, finding comfort together to move on would be an unhoped-for effort. But “Heavy Pendulum” is much more than that. This album outlines a new destiny just as bright as the stars they’ve been staring at since “Jupiter”. Cave In does not lack the imagination to put together a constellation of genres with such ease that you can’t get bored throughout its 70 minutes. All that while staying true to themselves. And being infinitely moving.

Definitely the “Best Comeback” and “Best Artwork” of 2022.

Nothin’ but hooks. Nothin’ but fuzz. Zero bullshit. Needless to say more. Their discography is flawless and there’s no reason for this to change. Yes, I’m completely subjective when it comes to Sasquatch, so what? Try to contradict me: these guys have been honing their sound for twenty years, as a remedy against the gloom and energetic crisis. “Fever Fantasy” is no filler all killer, a sheer collection of nervous and catchy-as-ever tracks.

Definitely a “Don’t Mess With The Boss” and “Don’t Touch my Faves” award!

From the album opener “Primordial”, Telekinetic Yeti impresses, especially after a pleasant but unremarkable “Abominable”. On this purposedly minimalist and rough as sandpaper record, the two yetis blast out short doom jams that, although their sound familiarly repetitive, displays grooves to shake your weedian carcasses. Massive, wild and hypnotic, “Primordial” is an invitation to fire dance in the middle of an acid-driven climax.

Definitely “Best sophomore album” and “best soundtrack for a sacrificial fire in the middle of the jungle”.

Don’t always judge a book by its cover. Don’t be fooled by the supposedly conventional offering of this “Cosmic Awakening”: eight monolithic instrumentals with no surprises. Here is an Italian trio that leads you in territories at the verge of acid psychedelia, muddy sludge and distorted blues.

Yves Klein created “Bleu Klein”, a deep and expressive ultramarine blue. Birds In Row’s album title sets the tone: they had to create their own color to express the purpose and depth of their tense and sensitive brand of hardcore. Without wallowing, Birds in Row deliver their take on the surrounding gloom as well as on mental illness and depression. Radical and uncompromising, the band make their fury and raw emotions collide within this clever piece of high sensitivity and intensity.

Number one album in the “We don’t have oil but we have great bands” category.

This was one of the albums I was anticipating the most this year, and the German combo did not disappoint. Even better, they transcended themselves to offer us their best album to date. Between the refined arrangements, universal yet incredibly topical themes, an iconic artwork, production as heavy and fat as it is powerful and classy, Hanno’s inimitable screams, a high class songwriting and massive choruses, everything is in there. Everything.

2022 was the year Hazemaze released their best album, and most unfortunately, also announced their hiatus. “Blinded By The Wicked” is the swansong of the Stockholm trio, and what an album it is! The band has finally defined its identity a bit more, leaving the garage hard rock origins behind to venture towards a definitely impressive classic doom sound. While keeping it vintage to the core, this album enjoys the best production to highlight their creativity. An inspired and inspiring album. All the best to the three musicians in their future ventures.

The hype is real. What can I say, their madness won me over. As a fan of all things prog and heavy, I couldn’t resist the unbridled yet masterful songwriting of the Belgian trio. Some people tend to criticize their bizarre and memorable videos, but as a long-time Red Fang fan, I can’t blame them. If I have to put on a red hat and an armor to defend Gnome against all odds, I’ll do it. Wenceslas! Little bitch!

4. CROWBAR “Zero and Below” (MNRK Heavy)

I’ve always loved Crowbar for their unrivaled science of The Riff, somewhere between a thrash heritage, a nod to doom infused with punk aesthetics, which earned them their legendary status place within the Sludge scene. However, few of their albums have made an impression on me because, despite a few huge highlights, there were too many fillers or a unworthy production. Yet “Below and Zero“ rocks from start to finish, and the production just feels like saying “take my punch on your face and save the other for tomorrow”. Unbeatable.

This nearly confidential release had no reason to move me in the first place. If I acknowledge Nebula’s major contribution to our scene, I must confess that I was rarely carried away by their music. But this one is different. Is it due to the band’s ability to be super consistent while still injecting diversity in their sound? Or the simple presence of Mike Amster on drums was enough to make my fanboy heart beat? Or is it about this absolutely perfect fuzzy sound? Whatever it is, this album oozes cool and fun. A complete success for the underrated great return of the legend Eddie Glass.