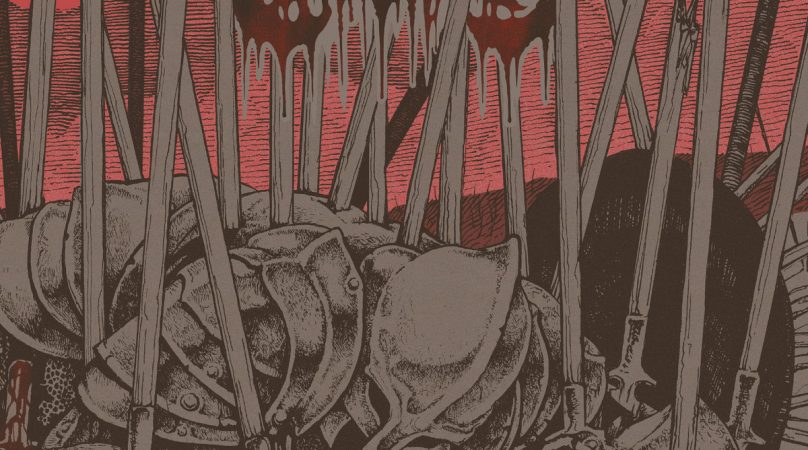 Do you REALLY want a review of the new Conan record? As if you did not know what to expect. Of course, it’s going to hit hard, of course, it will unbalance your internal ear, of course, the artwork will be top-notch, and yes, played live, these songs will awaken habitants of the nearby region thanks to mammoth-like subs.

No, instead, I’d rather talk to you about the Machaon butterfly. It is one of the most renowned butterfly species in our gardens. 8 to 9 cm of wingspan, yellow and black wings, it is THE butterfly you associate with the end of spring. What now? Keep on asking.

Ok, there are still a few things to mention about “Evidence of Immortality”. First of all, we have to talk about the production. As massive as always, it seems even louder and heavier than on “Existential Void”, probably thanks to these cymbals that cut through the mix and the bass and guitars more separated from each other than usual. Vocals sit deeper in the mix, almost flooded, giving this very raw and live-like style that sounds so organic. These are slight differences but Conan here again perfects its mastership without reinventing the wheel.

Songwriting-wise, we obviously know where we’re heading. We get treated with the expected blast beats here and there, the bigger-than-life riffs played ad nauseam but we also get a bit noisier on the finish for “Equilibrium of Mankind” or the intro to  “A Cleaved Head No Longer Plots”. As always with Conan, the drums fill all the empty spaces so that we never fall into what one would describe as funeral doom without all these drums fills and busiest parts. We can also note the more direct and almost melodic approach on “Righteous Alliance”, a very logical choice as the single for the album. Some might be surprised by this one everlasting keyboard note on “Grief Sequence”. The song goes on for 14 minutes and is a clear love letter to old-school doom (so much that it ends on an old tape recorder sound), bringing much-needed variety to close the album.

Did you know that the Machaon butterfly is especially attracted by carrots and fennel?

What else do you want from me? It’s rather simple, if you like Conan, you will love this record. If you’re not yet familiar with the band or don’t understand their sound much, this one won’t change your mind. Really, what else? Conan, it’s a definitive style on its own. From the sound to the songwriting or the artwork, they laid down the foundation for an entire genre of caveman doom that has been copied all over yet never mastered as well as by Conan themselves. When listening to Conan, we know where we’re heading. We join a group of warriors fuelled up by the heaviness of their music and by the monotony and meaninglessness of our boring lives. The immortality promised by Conan is an eternal purgatory for which the Brits provide the soundtrack. Suffering, violence and nihilism in a fantastic and fantasized chaos. That’s Conan and “Evidence of Immortality” is nothing short of a grand Conan.