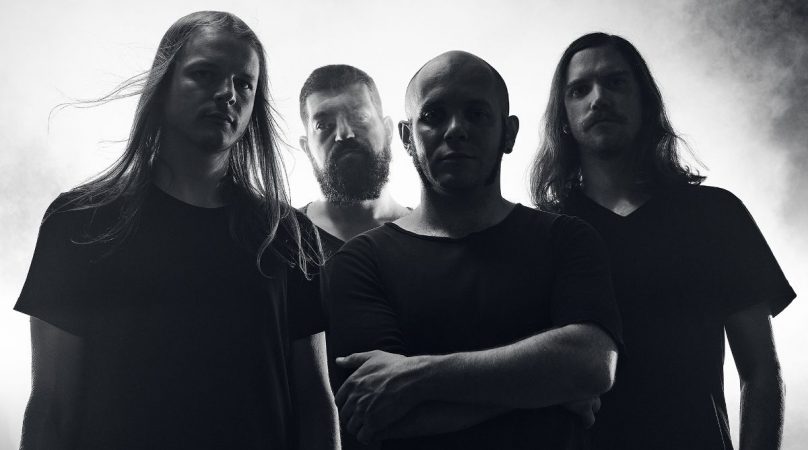 They might have stayed under our radar for a while but we’re now crazily enthusiastic about US progressive heavy rockers BLACK LUNG and their super melodic hooks and fuzz-loaded whirls. Today drops their killer occult and politic-charged new video for “Death Grip”, which we are premiering exclusively today!

About the video: “Death Grip is a critique of the funeral industry and those who profit off grief and death. It’s not a secret that funeral homes often take advantage of people at their most vulnerable, charging exorbitant prices for caskets and services. We decided to invite our good friend Shawna Potter (the frontwoman of War On Women and a champion of progressive values) to write and sing the chorus, as well as star in the video. My vision for the music video was a 70s-style occult horror, equal parts creepy and campy, and I’m pretty proud of what we pulled off with a shoestring budget. We see our antagonist, “The Death Capitalist”, relishing in his wicked business, until Shawna’s character, “The Witch of Justice”, kidnaps him. She takes him to her lair, where her acolytes (the band) mete out his punishment: torture by the power of rock n’ roll. It was a ton of fun to create and Jordan Miller (cinematographer/Gypsy Cab Productions) really helped us achieve our vision with his expertise in horror filmmaking.“

Despite its dark themes, you can feel a tangible sense of jubilation throughout their new album “Dark Waves”, and there is no doubt its stomping grooves, spine-shivering solos and acute sense of majesty topped with Dave Cavalier’s soulful coloratura will take you to higher skies in no time. Produced by J. Robbins and mixed by Kurt Ballou (Converge, High On Fire), it should drive fans of melody-driven bands à la Greenleaf, All Them Witches and even much fuzzier outfits like Domkraft crazy!

New album “Dark Waves” out May 27th on Heavy Psych Sounds. Find the band on Facebook and Bandcamp.