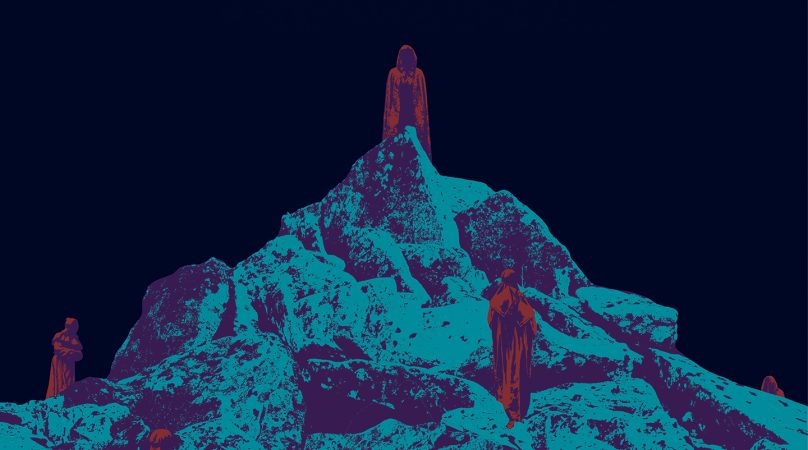 How can you play vintage and Sabbathy music without trying to reinvent the wheel or rip off your influences? Just like all the bands who ride the 70s revival wave, this is the one challenge Hazemaze has to face. On their first records, their raw energy, freshness, determination and pinch of garage rock were enough to get noticed. What weapons did our Suedes use on this new album, their first on the now-massive Heavy Psych Sounds?

In substance, Hazemaze follows their habits on “Blinded by the Wicked”. Eight songs clocking in at barely 40 minutes, like they’re used to. The artwork is quite conventional, but it already hints at a more Pentagram and Cathedral-inspired sound. For the first time in their career, they break the wall of sound with a 7-minute finale. Yet the surprises won’t come from the packaging.

It’s when we listen to the tracks that we have more to unpack. We let aside any leftovers of rock n roll and garage. Tempos are slower and riffs are clearly taking from proto doom with, still, a bit of a hard rock / early heavy vibe. Riffs are quite well written, clever without being too surprising. Some arrangements are even flirting with sludge when the bass gets dirtier and the guitar more dissonant, as on “Devil’s Spawn” or the excellent “Ethereal Desillusion”. This is further reinforced by the vocal lines which are not quite melodic — and that’s a good thing to avoid another “wannabe Ozzy” approach.

The outro “Sectatores et Principes” based on acoustic guitars, organs and percussions is quite expected but very well executed and keep it short enough to make it a nice melodic break. It also serves as a perfect buildup for the filthier, faster and stoner-sounding “Ceremonial Aspersion”. These hints of variety are welcomed on this effort; we never get bored, the interest is always picked yet we don’t lose direction. We find this stoner sound back on “Luceferian Rites” until it’s hard rock bridge that is. Listen to that full and round melodic bass sound. A delight. Lastly, we have the closing title “Malevolent Inveigler”, one of the best tracks on the record and a great way to end it. The main riff sounds massive yet so well articulated. The verses are weirdly reminiscing of Red Fang with the intertwined guitar parts and the raw vocals. Yet, it still sounds like Hazemaze. A true success in a less doomy and a heavier sludgier rock style.

The balance between the clean production, powerful and not too modern nor too vintage on one hand and varied yet coherent songwriting on the other hand just help the album to reach its full potential. Everything here feels under control and very honest. A true great of the genre, without any trickery but with an undeniable charm to it.

As to what weapons Hazemaze used to deliver such a good album in this very specific genre, I would answer the above: control and honesty. It may sound obvious but many a band would benefit from this lesson. Focus on your very best ideas even if that makes for shorter albums, bring in variety without losing your flair and touch, have a fitting production, cultivate your specificities and be conscious of your band’s strengths and weaknesses to offer the best you can, that’s what Hazemaze did here. And quite frankly it’s super encouraging from the three Northmen!

VOID ODYSSEY fills your veins with as much fuzz and doom as can do.