ENDTIME is all about 80s sci-fi apocalypse on “Impending Doom”. 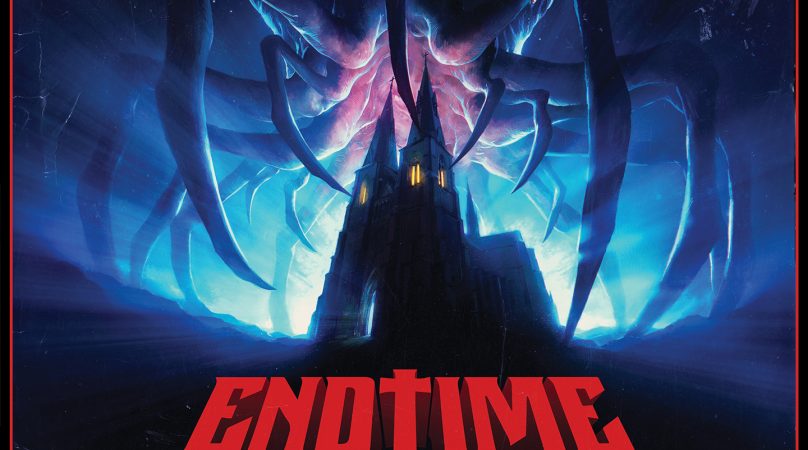 Oh, the 80s. Its neons, slasher movies, very bad 3D, square-shaped architecture, high gain on amps, dreams of flying cars… It was the decade of Kitsch yet it holds a special place in history with the fall of the USSR and the Berlin Wall. It was also a flourishing cultural decade with the birth of Hardcore, Black Metal, Grunge and, of course, Funeral doom.

Endtime present their very first album which is way more than a tribute to the 80s. Here it’s more of a cheesy love letter followed by a microwavable meal tray eaten while watching Evil Dead 2 on VHS by a D&D fan with the hairstyle of Robert Smith and his girlfriend, hairsprayed and wearing flashy leggings, both rocking Air Jordans. The full 80’s fest to the point where many will only see a parodical and tasteless revival doom effort. But we can feel a true love for the genre and a science in songwriting that pushes me to listen to it over and over again. On these five tracks, fat guitars are relentlessly delivering slow, massive, fuzzy riffs. The feedback, organs, introductive samples and gloomy bells are all here but never distracting. They just add a special touch without ever being too present. Over 30 minutes, the band shows how deep their knowledge of the classics is. The gravelly voice is a bit blurred in the mix, as it used to be done.

We could stop our analysis and claim that “Impending Doom” is nothing more than a clever tribute. But the more you listen to it, the more you hear its strengths. Its production is both vintage-sounding yet very muscular thanks to a surprising drums mix that gives a lot of space for the bass and guitars to occupy in the sonic spectrum. The guitar’s texture is so well crafted that it quickly feels like there are two full stacks of amps in our ears. We can hear the subtle keyboard texturing or the few moments when that low and voluptuous bass steals the spotlight. We also have to admit that this voice fits just so well here with the delay. We hear this climatic and chaotic end for the album.

Most importantly, we realize how good the songwriting is. If there’s one point that often threw me off with classic 80s doom is the songwriting missed steps. Often going on for too long or being too abrupt and simplistic, sometimes a solo being too psychedelic or quite the opposite. Here everything is well thought out. Riffs never repeat passed the point where they would be annoying, the distinctive elements of the songs are just present enough to make each track stand on its own without ever ruining the overall homogeneity and power.

The guys in Endtime are giving birth to their first release, a short and straightforward album. But they spent years working on it, fine-tuning it and it shows. Some might completely miss the point of this record or won’t like the neon doom approach but it will be hard to deny the qualities of it. And I surprise myself by saying that we have here a doom record that I’m listening to way more than I have ever thought I would. Kudos!