KADAVAR: inside a true rocker’s mind with Lupus Lindemann. 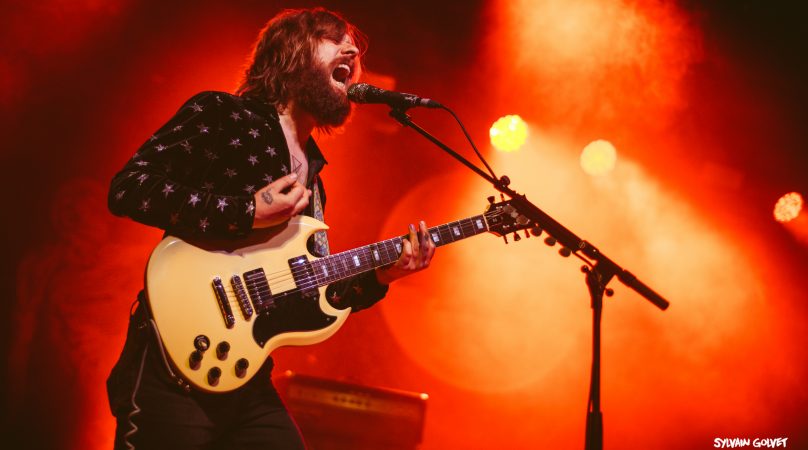 Desertfest Belgium, October 2021. Many of us still don’t realize we’re among our peers, in front of live bands… Tonight, Kadavar are wrapping up the party on the Desert Stage and its frontman Christoph Lindemann aka Lupus has a lot to say. One thing we have learned from the pandemic: a musician remains a musician, despite not being able to leave his house or meet up with his bandmates. This interview was purposedly an intimate one, even if we will also discuss Kadavar’s new label Robotor Records, as well as the most exciting old-school psych project released at the very end of the year: their collaboration with Elder answering to the sweet elvish name of Eldovar… (PHOTOS: Sylvian Golvet)

First, we’re going to go a little back in time. Could you tell me which is the very first song you learned to play on the guitar?

Lupus: I think it was “Smoke on the Water” or “Nothing Else Matters”, something where you don’t have to know much and still can play it. I’ve never learned the acoustic guitar and started right away with the electric guitar. My sister got an acoustic guitar and I got jealous, so I asked for an electric one (laughs).

Is there a show, as an attendee, that changed your life or at least your perception of music?

I don’t remember the year exactly, but it was a French band called Gong. I used to play with a much older guy when I arrived in Berlin. I was nineteen, he was like forty and he asked me to play guitar in his band. He had this huge records collection and would take me under his wing, guide me in the right direction. One day he came with a Gong record and told me: “you need to know that”. I started liking them and saw them live when Daevid Allen was still doing good. It was at an old heavy festival in Germany, and it changed everything because when I saw that, I knew I wanted to have a psychedelic band.

Let’s talk about live music! One thing that differs from the 60s/70s right now, is that bands rehearse their set and tend to play the same show every day. In the old days, bands used to play different stuff every night, sometimes it was good and inspired, sometimes not. There was a risk. Do you take risks on stage?

Going on stage is already a risk! (Laughs) At that time there were no phones and no cameras, so I guess if you sacked your show, no one would know in the next city. Today, every minute of the show is visible to everyone. Concerning Kadavar, we try not to play the same set every night. We usually have six or seven more songs that we would play and change it from one night to another. It’s important because your head becomes a little lazy when you know what comes next, and when we change at least the order, we’re more concentrated.

For me yes, because I hate to see myself the next day on Youtube… Not that I google myself every day (laughs), but I know it’s there and that’s already enough.

“Be open-minded, get out of your comfort zone, travel around the world, meet other people, learn from them.”

As a musician, what is the most important thing that you’ve learned?

First of all, you have to learn to wait. Because it’s what you do all day when you’re on tour. And then, be open-minded, get out of your comfort zone, travel around the world, meet other people, learn from them. You may also have to guide people around you and be a good example for them. I think the whole touring thing made me a better person. Maybe… I hope that other people can see that too… (Laughs)

Speaking of being an example, a few months ago you said that you wanted to find new blood via your own label Robotor Records, telling them that it is still possible to play rock today, that it is not only something from the past.

We’ve just signed a young band from Finland called Polymoon, and I think they are combining what we are looking for. They have several new influences; the sound is new but the way they play is kind of old school. There are a couple of other bands we’re interested in, but at the same time, we want to keep the label small because it’s a lot of work. If we have too many bands, we may not have the time and energy to do all the things that can be done, and it wouldn’t be fair for these young men. That’s something we learned as we were young, that you always need someone who is into your stuff and really tries to push it, someone who gives 100%. If I have the feeling that I don’t have these 100% for them because I’m busy with something else, that would be a terrible feeling for those young people who trust me.

Did you meet such trustworthy people when you were a young musician? Someone who could give you these 100%?

Yeah, our first label [This Charming Man Records] really did a hell of a job and pushed us according of all the possibilities he had, because it was a one-man label. There is also Nuclear Blast team who is really up for it and always tries to support us.

“We did like six or seven albums in ten years, so finding the inspiration that leads you to do something that hasn’t been there yet is something that I hope will never go away.”

Since the early days of Kadavar, what has changed, what hasn’t, and will never?

What has changed is that I think the wild days are over. We now enjoy life and touring in a different way. We recorded our very first live in this same venue, on the Canyon Stage in 2013. That was a heavy tour with lots of partying every night. And now I’m here, eight years later and I remember all this, and I’m like “I really couldn’t do that today”. (Laughs)

The last question is a white card! Is there anything else you would like to say?

Oh, I love those ones but they are the hardest ones (laughs). We have a new album out with Elder. The project is called Eldovar and the record will be out in December [it is available now on Bandcamp]. That’s something I’m very happy about. It started as a little jam on a weekend, we just met to play music together and realized that something « clicked » between the bands, so we would sit down and write and record enough for a full album. I think we had like fifteen hours of music… We knew them a little bit, but not that much. Their bassist was stuck in the States so they couldn’t do rehearse or play. They were bored and we were bored, so we said “ok we have a studio, so let’s do it”. It’s the second album that came out of boredom after “The Isolation Tapes” (laughs). We also just released the Splinter album which is definitely something worth to check out, the guys are from Holland. We try some special things we haven’t done before on a big label, like collaborations with other bands or singles so follow the newsletter and you’ll know everything!

An interview with Norway’s most fuzz-loving geniuses KANAAN.