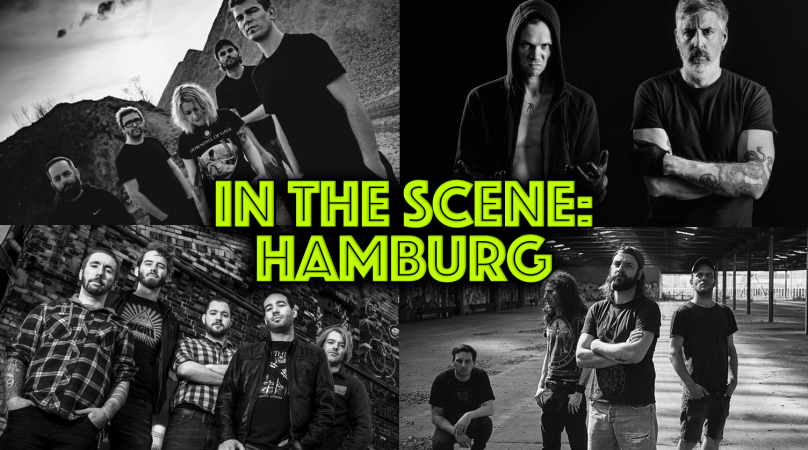 “Den Norden sind wir!” We come from the North! No, we’re not talking about Sweden or Alaska, but Northern Germany, reaching all around the most beautiful city in the country: Hamburg. I had the immense pleasure of spending 6 years of my life by the Elbe, living right in St Pauli. After all those years spent in the stoner / sludge / grunge / punk culture of the great north, I feel very much obliged to discuss the very best Hamburg acts when it comes to loud, fuzzy, and heavy music.

First, I have to remind everyone that when talking about Hamburg, we can’t get away without mentioning the Welturbljugendetage (or “international Turbojugend days”), you know, the denim jackets superfans of Turbonegro and anything rock n’roll. Hamburg is also a classic stop in most European tours before bands hit Scandinavia. Hamburg is known for its countless rock and metal venues, and it is also the historical European capital of tattooing (with the longest-lasting tattoo parlor in Europe), as well as the city where the Beatles became grown men (and a proper band). Hamburg smells, feels and lives rock music. Northern Germany is also the home for various labels such as Pink Tank (Camel Driver, Low Orbit) as well as H42, a label that specializes in limited runs (Mondo Generator, Karma To Burn to name a few).

Of course, Hamburg might not be as “trendy” as its neighbor Berlin. Less crazy, less over the top, less rebellious, less associated with drugs and parties, the mindset is radically different and this shows on the local music scene.

No introductions needed. It is undeniable how big the duo’s influence is when it comes to loud, heavy and fuzzy music from Northern Germany. For anyone who’s ever listened to Mantar, one specific trait is that despite being extremely rock’n’roll, the band is neither sexy, FM-friendly nor overly groundbreaking, and obviously not easy-listening either. Mantar, just like many bands on this list, are mostly known for their honesty. A band true to themselves, without any artifices. Music tailored by and for heavy music connoisseurs. It smells like cold sweat rolling down your spine and benefits from this typical nonchalance for a region that lives in the dark, cold and rain 310 days a year.

Kavrila, the cream of the crop.

In the myriad of bands who have a zest of Mantar in their sound, Kavrila is at the top of the game. Imagine Mantar and turn every knob to the max setting. With a dirtier, more nihilistic and yet impactful sound, and merciless live shows, Kavrila make a point not respecting any code or pre hashed formula. Kavrila is top-tier material and they might very well make us fully forget about any other sludge act from northern Germany.

Moewn, for those with fine taste.

For “seagulls”, in German. To anyone who spent some time around the Alster (the interior Lake of Hamburg), the name resonates. Their music is a call for adventure and travels: embark on a boat, float to the fjords and to the north pole. What we have here is melodic and ambitious experimental post-rock with clear stoner roots. Imagine the offspring of Russian Circles, Yawning Man and My Sleeping Karma. The guys play incredibly well, the ambient parts are a treat for your ears. This is one of those bands that deserve way more attention outside of the area.

First, I need to be sure you won’t make the same mistake I did for too long. The band name is pronounced “Huna”. Now back to the music. Hyne is one of the oldest stoner bands in Hamburg. They played with every big name you can think of and recorded with Scott Reeder of Fu Manchu in their well-known home studio. What can I say? They’re a classic in the Hamburg scene, yet often overlooked elsewhere. Their music flirts with grunge and heavy rock, always super catchy and even if their sound evolved and despite their regular hiatus, they always come back from their ashes to shake the local scene.

Some might say that High Fighter own everything to their lead singer Mona (also known in the business for being Napalm Records former publicist). That’s unfair, and we have to admit she has one hell of a powerful voice, capable of both guttural growls and melodic lines when needed. She’s an incredible frontwoman on stage as well. With a well-received album and EP, they have toured with Conan, Hark, Corrosion of Conformity to name a few. Hard to claim that this success is not well-deserved.

Loyft is a classic hard rock stoner band with a psychedelic touch. Obviously this means that they do rely a lot on 70s classic sound. They groove, they are all skilled musicians and even if they haven’t reinvented the wheel, they know how to inject a bit of craziness here and there when needed. In the end, maybe are they just a victim of their own lack of ambition? They still remain a true hidden gem from Schleswig Holstein.

You are now introduced to all the bands, the playlist is in your hands, but for my duties to be fully completed, I will also highly recommend you to attend the yearly Melvins show at Logo, or one of the many stoner gigs at Docks, Grosse Freiheit 36, Hafenklang or at mythical former military boat MS Stubnitz the next time you’re coming to Germany!