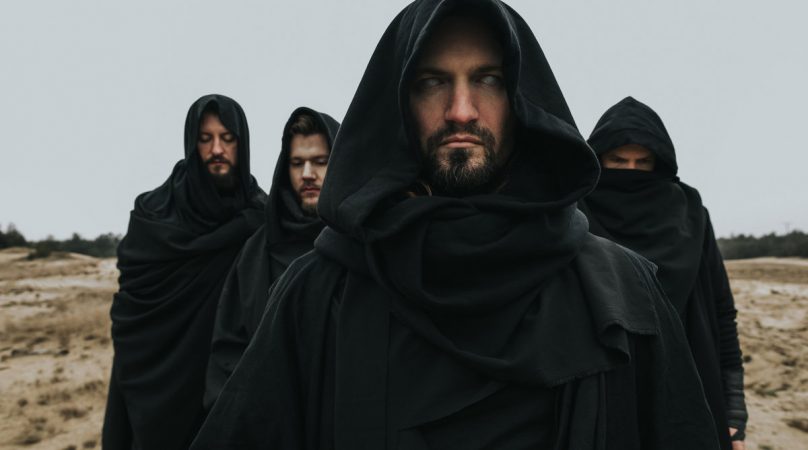 We wanted to let the dust settle a bit before discussing one of the most anticipated albums of early 2021, only to realize that SUNNATA‘s success has grown one record after another despite a total DIY ethos. Without any help, Sunnata have made themselves heard beyond the Polish borders, to the point of becoming a spearhead of Poland’s heavy scene. Coming from a breeding ground of bands known for their mammoth sound, Sunnata stand out by delivering a brand of doom filled with liturgic-like chants and an exalting mystique. A strange beauty emanates from their gloomy yet thrilling music or “shamanic doom”, as they like to call it. Their new album “Burning in Heaven, Melting on Earth” could only refer to the current conflicts taking place in their homeland, whose leaders are worthy of the most puritanical American states. Without fully embracing the power of “Zorya” or the hell-bound trip of “Outlands”, “Burning In Heaven, Melting on Earth” shows a new face of the Polish foursome that we leave you the pleasure of discovering with this in-depth interview.

Hi Sunnata! How are you doing in this particular period? « Burning in Heaven, Melting on Earth » was released three months ago now. Have you finally come back to Earth?

Hey! We’re slowly getting there! The dust has settled and we slowly start to realize that the reception of our 4th studio album has been better than any record before, what makes us proud and gives good energy, so needed in these uncertain times.

There is something about you guys that keeps amazing me. “BIHMOE” is your fourth studio album, still it’s 100 % self-released without the help of any label nor structure of any kind. Why this choice? Is it an outright rejection of today’s music industry?

It’s not a rejection, it’s the direct result of how the modern industry is structured. Back in the days we wouldn’t do much as an independent act, but now? Anyone can create music, promote it, book the shows and go on tour. Lower entry barrier means bigger competition, obviously, but also gives way more freedom and naturally selects the acts, that are not stubborn enough to consequently move forward, improve, grow and build their own names.

“We’ve been invited to play with Sleep, Mastodon, Entombed AD or Rotting Christ for a reason. A reason that’s backed by strong attention to quality, something we don’t want to compromise on… so if there’s an open-minded label out there – give us a shout!”

We think that your music deserves better exposure. Don’t you think a label could provide the help you need to break this glass ceiling?

Thank you. A right label could probably help us, but we’ve never been approached by any that wanted to treat us like partners. After at least a couple of discussions with the bigger ones, we acknowledged that we’d probably lose control over the shape of our records as well as the release time, not to mention the rights to our music. Don’t get us wrong, we’re no divas, but there are conditions that we cannot agree on because we know it would hurt the joy we get from making music. We need more promotion/exposure, but we don’t need money from a label and the money is what many of them try to use as the most important part of the deal. Wrong address. We’ve been invited to play with Sleep, Mastodon, Entombed AD, or Rotting Christ for a reason. A reason that’s backed by strong attention to quality, something we don’t want to compromise on… so if there’s an open-minded label out there – give us a shout!

Your evolution has been constant from “Climbing The Colossus” to “Zorya”, then from “Outlands” and “Burning in Heaven, Melting on Earth”, on which you seem to have found your own style — that “shamanic doom metal” you describe. Is this the real face of Sunnata?

Constant change is what the real face of Sunnata is. We like to test new things, go where we’re afraid of. “Shamanic doom metal” is just a name, a semantic umbrella where we’ve been trying to fit our trance-inducing, ceremonial sounds, doomy and melancholic vibes, and tension present in our music. Who knows what’s gonna be on the next album?

In response to our album review, you said that “Burning in Heaven, Melting on Earth” is “more or less the successor of “Outlands”, but meant to be an exploration of different grounds, sometimes maybe known by the band only”. I think it’s time to tell us more.

Haha! Sure! “Outlands” is an album focused on the trippy face of our music. When writing “Burning in Heaven, Melting on Earth”, we were aware that the general shape of Sunnata has settled a bit with “Outlands”, but wanted to take this further. We challenged ourselves with writing more conceptual lyrics, experimenting with more song-like structures – think of “Crows” or “A Million Lives” as examples – or trying to write songs that we’ve never done before. Take a look at “Way Out”, with rotary speaker effect straight from “Planet Caravan” and Floydish accents here and there. The album itself feels like a continuation of “Outlands”, but the truth about its real nature is in the details.

“Burning In Heaven, Melting On Earth” is a title that calls out. You said that your lyrics are the backbone of your music. Religious fanatism seems to be the common thread of your album. It’s true that the peaceful trippiness, the tribal pounding and skull-crushing doom riffs really fit to religious fanatism…

Yes, the lyrics became the backbone on this album like never before and should always be filtered through the nature of our music. We don’t follow the path of angry metalheads. We prefer to contest through contemplation.

“The entire lyrical theme on “Burning in Heaven, Melting on Earth” suits the current situation in Poland really well. Watch out for the leaders hungry for power, cynically using your faith to hurt minorities and polarize people against each other. It’s a social regress, but people are thankfully waking up.”

The album release coincided with the entry into force of a ban on abortion in Poland – which is a predominantly catholic country – and the huge protests that followed. The album’s theme resonates a lot with the quasi-insurrectionary uprisings in your country. Of course, we’ve only heard scarcely of it abroad… What’s the situation right now?

No change, unfortunately. The ban has been sustained, but you cannot expect anything else from a populist, conservative-oriented political party that has a governmental majority, a president, and works closely with catholic church.

It’s hard to imagine a European countrycoming to such an end, and the social regression it implies. It’s another proof that what you say matters!

That’s true. Entire lyrical theme on “Burning in Heaven, Melting on Earth” suits this situation really well. Watch out for the leaders hungry for power, cynically using your faith to hurt minorities and polarize people against each other. It’s a social regress, but people are thankfully waking up.

In 2019, your fellow countrymen in Dopelord, Weedpecker, Major Kong and Spaceslug had the good idea to release a split EP featuring the finest of the Polish doom/stoner scene. We feel a real cohesion between you all. Is that the real definition of a music scene?

These four bands are definitely within the most recognizable acts on our local (but also slowly global) scene. There is more, as you probably noticed that Poland became some sort of a new mecca on doom-stoner-psychedelic landscape. We’re full of enormously talented artists, so the 4 don’t define the scene, but are an important part of it.

To end this interview, we would all like to hear good news about some possible French or European shows…

2022 will be tough for touring due to a fact everything rebooked from 2020 & 2021 will happen there, but WE WOULD LOVE TO VISIT FRANCE AGAIN, and we’ll do our best to do so. France has one of the craziest audiences out there and we love how it resonates with our music. Thanks for the interview!