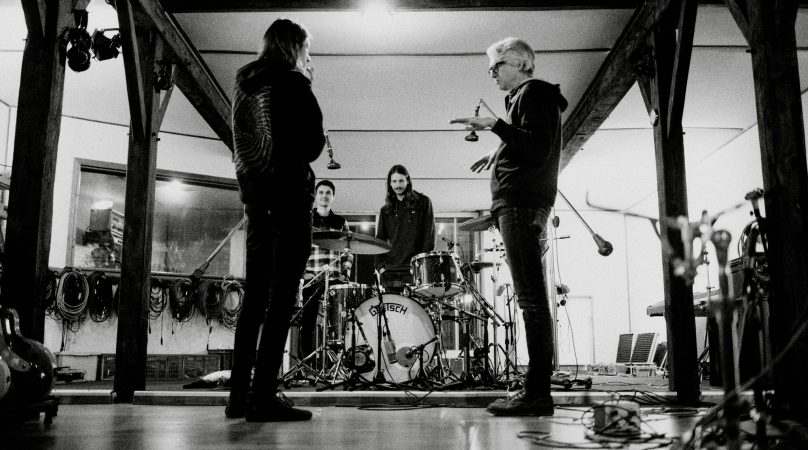 Few albums are as eagerly anticipated as the follow-up to ELDER‘s ‘Reflections Of A Floating World’. From the underground-approved stoner rock milestone ‘Dead Roots Stirring’ (2010) to the proggier, majestic soundscapes of their recent installments or 2019 Postwax collaboration, the trio has kept pushing the boundaries of modern heavy music by crafting their very own brand of epic rock. While the band subtly morphed into a four-piece with the addition of Mike Risberg on guitar and keys, they also very recently welcomed Georg Edert on drums. Earlier this month, we were able to sneak in Black Box studio in Angers, and soak up the creative vibe while the band was recording their new album. Spend one day with the Elder crew through our exclusive photo report below! (ALL PHOTOS: Gaël Mathieu)

Guitarist and vocalist Nick DiSalvo tells us more about the new album: “For the recording of our next record, we wanted to take ourselves out of the usual elements surrounding the band, immerse ourselves in the recording and get out of the city. Since the band’s headquartered in Berlin these days, our eyes fell on Black Box in France, a studio we knew from recent recording sessions with Sugarfoot and Motorpsycho. Black Box seemed like an ideal choice location-wise, an ample excuse for a road trip to rural France and a world class studio to boot. We wanted to work with engineer Peter Deimel because of his decades of experience in recording primarily rock and indie records, and not really operating in the realm of metal at all. The choice paid off, and we’ve been able to make a really nice, clear, focused and full sounding record – not overblown or over-produced, but made with patience, experimentation and love (and the usual creative frustrations). What can our fans expect? We haven’t abandoned our long song format, but also added some twists and turns. I feel we’ve fully explored all of our facets, from the minimalism of the last EP to full blown prog rock. We also had our good friend Fabio Cuomo, a killer pianist from Italy, record all sorts of interesting stuff on the album. I think it will be a pleasant surprise for everyone who still considers this a “stoner rock’ or “doom’ band.“
[Show as slideshow]