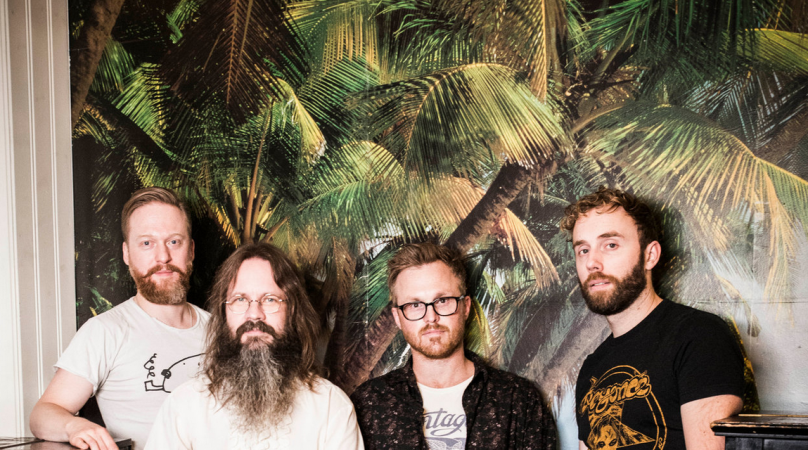 LOWRIDER: a band name that has resonated among stoner rock fans since the early 00s. Actually, your “stoner rock essentials” list wouldn’t be complete without their debut and 2000 classic ‘Ode To Io’, for the Stockholm foursome is rightly considered as a seminal act of the European fuzz scene alongside their mates Dozer. Life being what is is, the band unexpectedly went on hiatus afterwards. Fortunately, they reformed for a one-off show in 2013 by special request of Desertfest founder Reece Tee… but nothing was set in stone yet. The first I met the guys the year after during a fun interview in London — when they labeled themselves as “forest rock” and I said that Ola Hellquist was “the Tom Hanks of guitar”. The band has kept teasing up about a new record since then, to the point that fans lost all hope, but guess what: LOWRIDER are finally set to release their first album in twenty fucking years this February 21st via Postwax! Until you all lay your hands on this new stoner rock essential (believe me when I say it meets all expectations and beyond), I asked frontman Peder Bergstrand to name the ten releases he’s been spinning on repeat these past twelve months. (PHOTO: Anna Liden Wiren)

“Actually, making a top 10 list for 2019 was sorta hard, because most of 2019 I was hyper focused on recording and producing our new album “Refractions” with Lowrider… I just haven’t really consumed a lot of music like I normally would. On top of that we created the PostWax series, which ate up pretty much every minute of my hours awake in 2019, haha… So looking forward to the release of “Refractions” on February 21st and the shows we have planned to support it! 2020 will be a great year.“

Pretty much the best band around at the moment. Beyond awesome.

Really a 2018 release, but it’s been on heavy rotation this year as well. Absolutely amazing band.

I love pretty much everything and anything Ty and his gang of surrounding musicians put out. Ty keeps his lowest bar pretty much up in the stratosphere on the regular.

I had the absolute joy of getting to direct two videos for their 2019 comeback album, and it’s just SO good. Love them.

This one is really from 1996, but they reformed for a show this year, and I was reminded HARD of just how fantastic that record is. Ultra gritty, high energy rock and actually ROLL. Highly recommended.

Constantly one of the best bands, period. Love them.

I’m biased here, due to the whole PostWax thing, but MAN, Nick and his mates made a really special one here.

I really liked their ‘Frost’ EP on PostWax as well, but this track is the absolute standout for me. Awesome stuff.

I love all things Scott do, sonically and visually. This one kept his A-game going.

Nick DiSalvo of ELDER shares his music highlights of 2019.