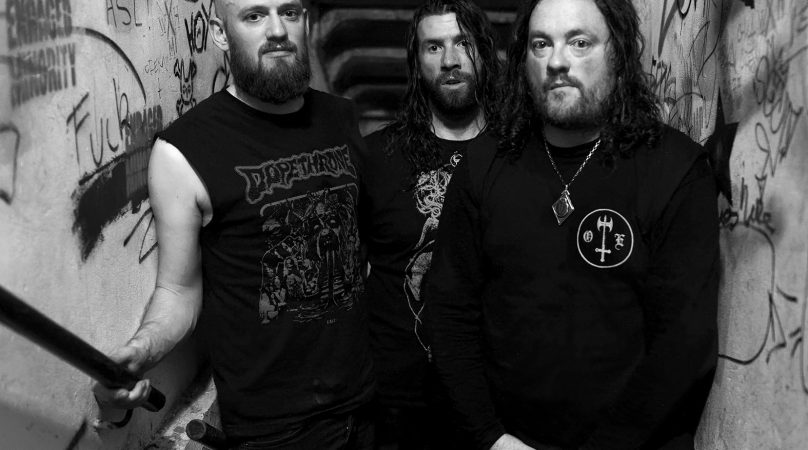 “CONAN are as heavy as interplanetary thunder amplified through the roaring black hole anus of Azathoth.” Quite frankly, we’ve never read a more accurate promo quote about a band than the latter, to be honest. The Liverpool trio has been destroying amps and annihilating peace for thirteen years in an unrivaled way, yet their latest album ‘Existential Void Guardian’ sees them pushing the modus operandi to new heights, delivering their most complex yet straightforward record to date. The Heavy Chronicles’ #1 Conan worshipper Razort caught guitarist and vocalist Jon Paul Davis in between two European shows for a quick battlefield roundup.

I assume that many people got into CONAN through the « Foehammer » video (released five years ago on St Valentine’s day!). Can you tell me more about the concept of this fascinating animated movie? Was there a story behind it all, or did you give carte blanche to the video team?

Jon Paul Davis: The video concept was the idea of the guys who put the video together really. I’ve never got too much involved with the ideas outside the music. I prefer to let others interpret what we are doing. They wanted this idea of a beast absorbing nature and becoming more than a sum of its parts. I really like how it came out.

You played Hellfest for the second time this year, with the original lineup (how I missed Chris growls!). Your sound has never been so dark and crackling, from ‘Thrones Of Fire’ it has gotten more blistering, more satanic should I say. I like the way you got into full blast mode right after your slowest track during the set, I was awestruck. Do you guys listen to any black metal or faster and more brutal music of any sort?

JPD: We do yes. Chris listens to a lot of Black Metal, I love both slow and fast metal: Black Cobra, Cyanide etc. Johnny plays and played in bands that play a lot of faster music too, so I guess it’s understandable that this comes out in our music a bit.

I’ve always felt like Conan’s music is best enjoyed in small, smoke-filled clubs — your two shows in Bordeaux were one of the best I’ve attended. Have you ever listened to your own music while high? If so, has it changed your perception and brought up new ideas?

I’m not really into drugs.

I also remember seeing you at Roadburn with Slomatics in 2017. This festival is really something else. Can we expect Conan to return there at some point, maybe as a curator or for a one-off performance?

Roadburn is an awesome festival, we have had the pleasure of playing there twice. Who knows what can happen in the future.

About your songwriting process. Do you have the whole story in mind before laying any riff, or do the riffs are the foundation for your lyrics? I always picture demonic creatures fighting with hammers and swords in the middle of misty, muddy lands.

JPD: It’s a bit unusual I guess but most of the time, the songs kind of blossom as one. I’ll think of one line or one riff and then everything will come together as one when I don’t expect it to. Regarding the themes, I usually base the theme around whatever sounds good in the first line or two.

All the artworks designed by your long-time collaborator Anthony Roberts are simply stunning, and part of the Conan experience. How did you come up working with him? Can you tell me more about this trademark visual identity of yours?

JPD: When we recorded Horseback Battle Hammer, John McNulty (who played bass for us then) recommended him. We spoke and quickly got into the stride of working with one another. He’s always been our artist and he just gets what we want to do. The identity he has created suits us perfectly, every time he comes up with a new idea it looks great. I’m excited to work with him on the new album artwork.

Have you ever considered releasing an art book or comic book with all of Conan artworks?

JPD: No plans for that currently, but not a bad idea!

Now can you name five bands that have influenced you as a musician?

Last but not least, an essential question if you ever come back to Bordeaux: pint of beer of glass of wine?

Catch CONAN on their European tour with Un and Sixes, and get the latest news on Facebook and Bandcamp. New album “Existential Void Guardian” still available on Napalm Records.