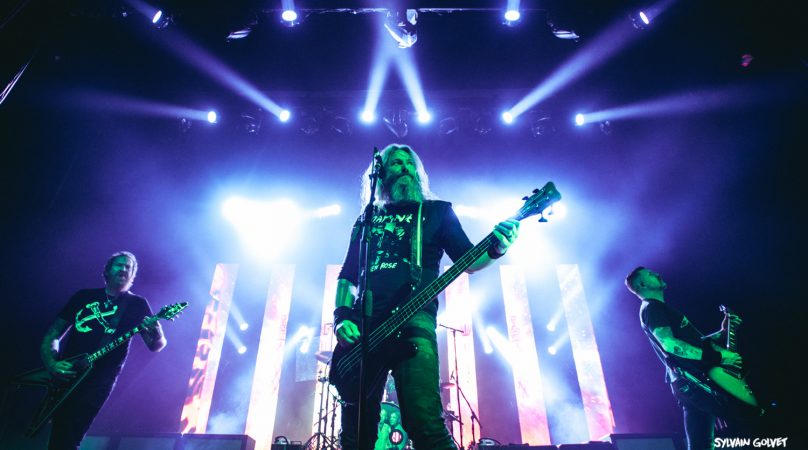 “The absent party is always to blame.” This could be true for fans who missed the show, as well as all three acts — each one of them were lacking a member for various reasons, without being crippled at all. MUTOID MAN, KVELERTAK and MASTODON have joined forces at Casino de Paris and successfully made us forget about said mishaps! (PHOTOS: Sylvain Golvet)

MUTOID MAN are the goofy kind of band, the one who makes appearances on the Two Minutes to Late Night web show, performing Tom Jones covers in the subway  or any other song while being dressed weirdly. Anyway, NYC’s shredding punks prove to have some strong, anthemic songwriting skills on top of their highly infectious rowdiness. We can’t help grinning when hearing the interwoven lyrics of “Kiss of Death” while headbanging all along — the trio’s records hold a decent amount of catchy treasures like this one.  With such seasoned musicians, Mutoid Man kick our asses and crush all eardrums with a high-octane performance that gets everyone in the mood for the night. On drums, Chris Maggio is filling in nicely for Ben Koller (to whom we’re wishing a swift recovery). 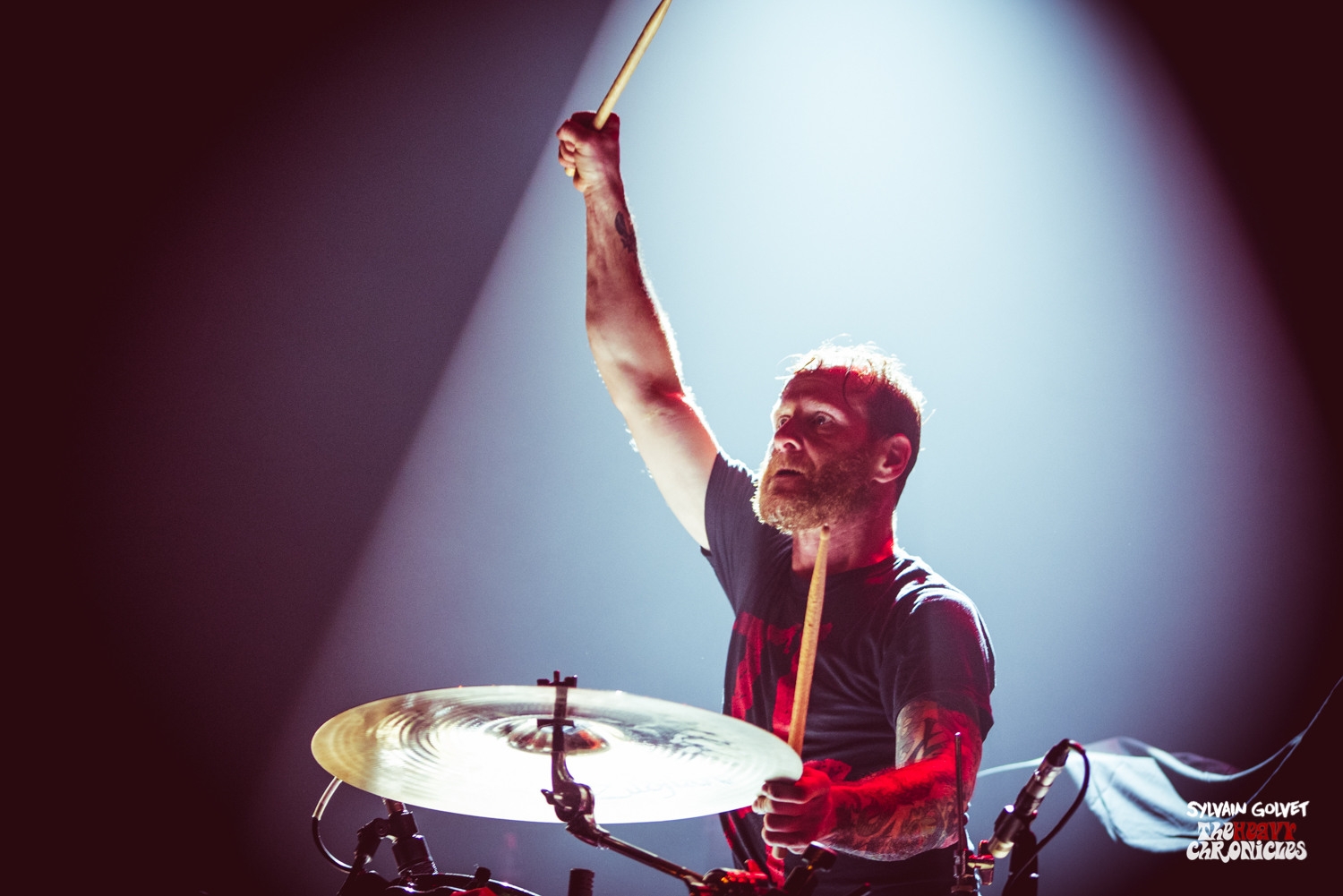 Most KVELERTAK fans have had one thing in mind today: “how is the new frontman?”. We interviewed the band earlier today and they were praising him as an absolute showman, the kind who’d give even the lamest band a boost. No pressure here. We find ourselves a bit startled when a slender, blonde dude with a red headband appears on stage: Axl Rose’s reincarnation? (How’s that, “he’s still alive”?) Ivar Nikolaisen is one hell of a dynamo and doesn’t lean on his fellow berserkers, moving about, rolling on the floor, throwing his mic stand in the air and crowdsurfing… three times! A bit too much? Some won’t help thinking that he may be overplaying it a bit to make up for his predecessor’s departure. Vocally speaking, the job is done even though his voice is a bit undermixed at times, especially from the front row.  I guess we’ll have to wait for the next record to jauge the performance properly.

Now it’s fun’o’clock and KVELERTAK are in command, blending all three records within a masterful sound and performance — the result of countless tours in various settings. The show is well-oiled and the Norwegian are enjoying themselves just as much as the crowd. Second act, second success. 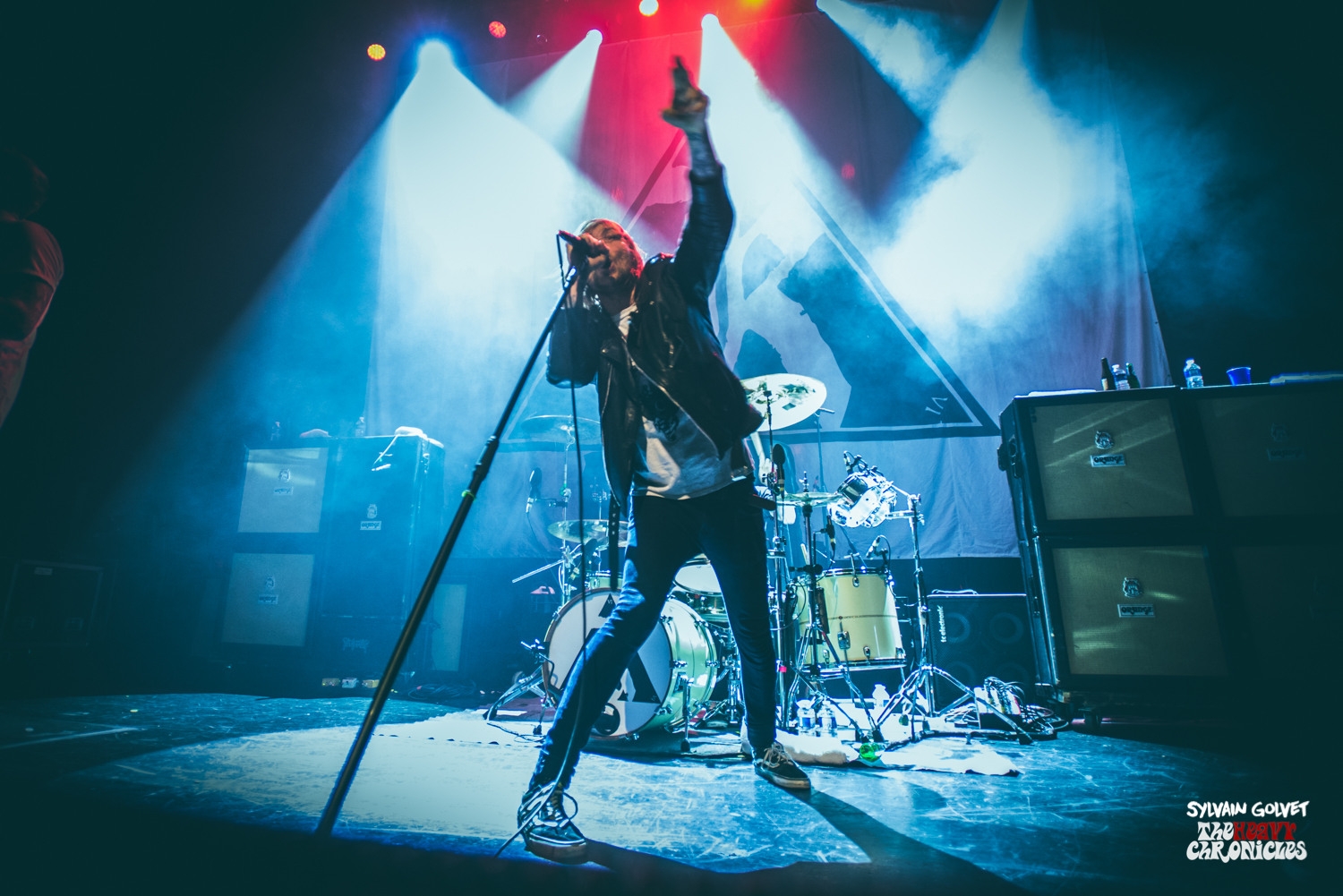 We may moan about Live Nation (51 € to get in here, dammit!), the night is run flawlessly and the set change takes no time, with MASTODON taking the stage at 9pm sharp! The Atlanta foursome are not sparing themselves either, making a sharp way in with steamrollers like “Iron Tusk”, “March of the Fire Ants”  and “Mother Puncher”. Troy Sanders presides in all his hairy splendor, and keeps striking epic wide-legged poses alongside Bill Kelliher. The hotchpotch that follows allows us to assess a fruitful career punctuated with unique records, while still delivering the often-copied-but-never-bettered ‘Mastodon touch’ filled with off-beats, drum fills, guitar harmonies, Hinds’ weird solos, and jerky thrashy stampede of the highest order. A formula that allows them to deliver “Precious Stones” and “Sleeping Giant” without us even noticing the 11-year time gap between both songs. 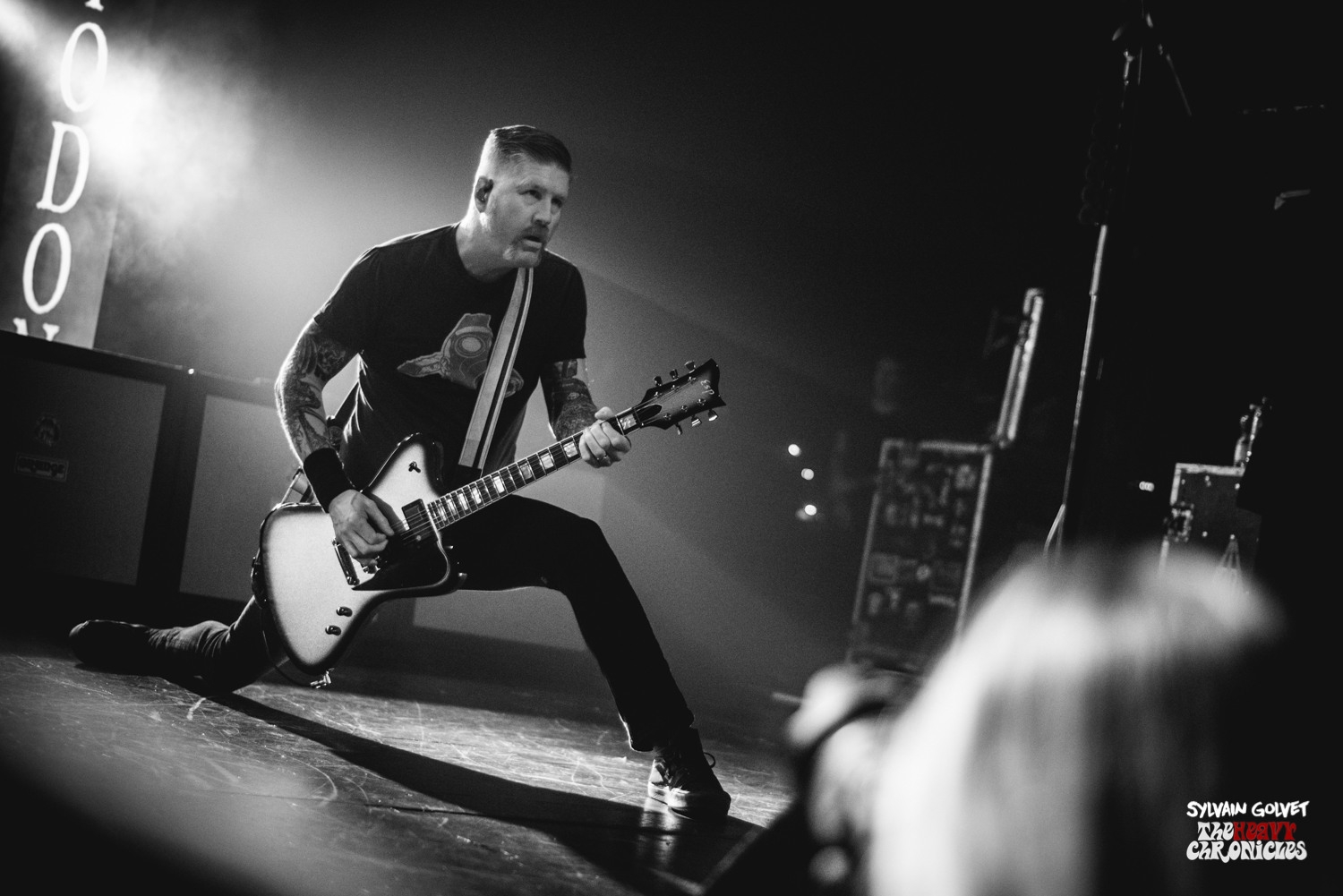 The downside may however lie in the density of their music, leaving no space for breaks or improv. A sonic monolith that can get wearying at times.  Mid-set, we start to feel a quick decline in momentum  — blame it on “Toes to Toe”, the weakest track off their latest EP. Mastodon don’t let go for all that, and go all the way in on the home stretch by literally blown away by the “Crystal Skull”, “Megalodon” and “Spectrelight” tryptic. Without any further ado, “Aqua Dementia”, “Crack the Skye” and “Blood and Thunder“ destroys all survivors in the pit. 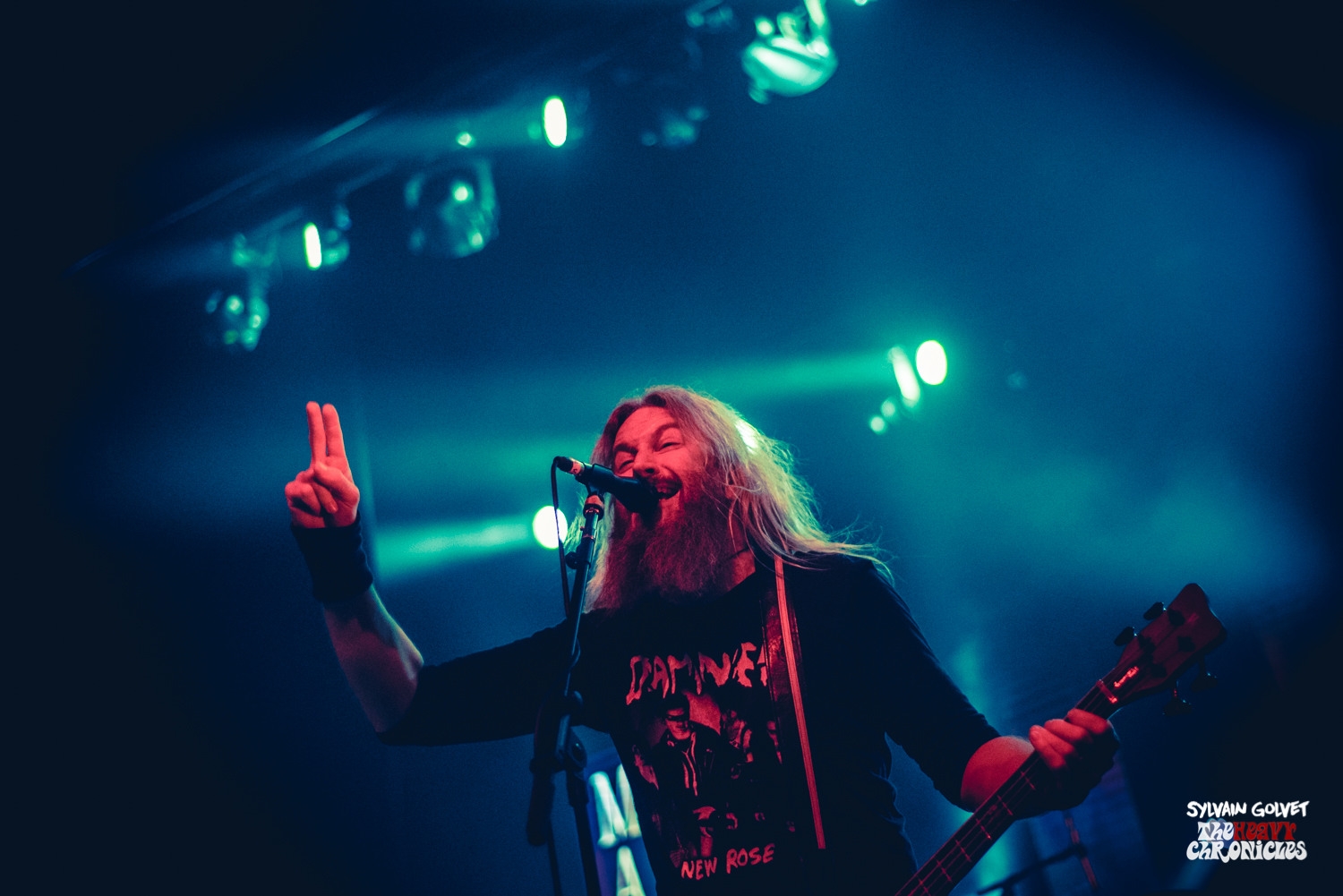 Conclusion? Throughout twenty songs and a two-hour set, Mastodon are unstinting and master their art like never before — with a considerable improvement on vocals ver the years! As for us, we’re washed out of being hit with more notes than one can handle, time to get some rest… Oh, but here is Brann Dailor — who spent enough time hidden behind his drum kit and Troy Sanders —  who starts treating the audience to a five-minutes standup. And teases us about an upcoming record to be released next year. Duly noted. THE AGE OF TRUTH "Resolute"