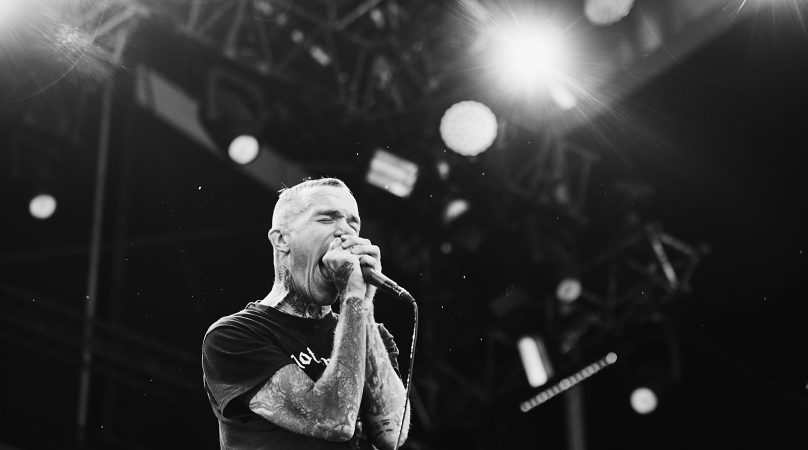 This was the lucky 13th edition for Europe’s most colorful metal festival HELLFEST – as for me the ninth, and my first as a reviewer. I was honored to cover this loud weekend on behalf of The Heavy Chronicles, with a Friday stamped by the dusty Valley seal and a lineup just as muddy as the weather in 2007! (PHOTOS: Gaël Mathieu)

But before we get to what matters most, let’s talk about the site’s innovations. The promoters have managed to add facilities such as impressive water arches to hydrate festival-goers and a huge bar in front of the Main Stages, decorated with a gigantic erupting planet that provided a great show at night. The pavement in front of the three outdoor stages may have caused debate, but in the end, no one missed the dust. 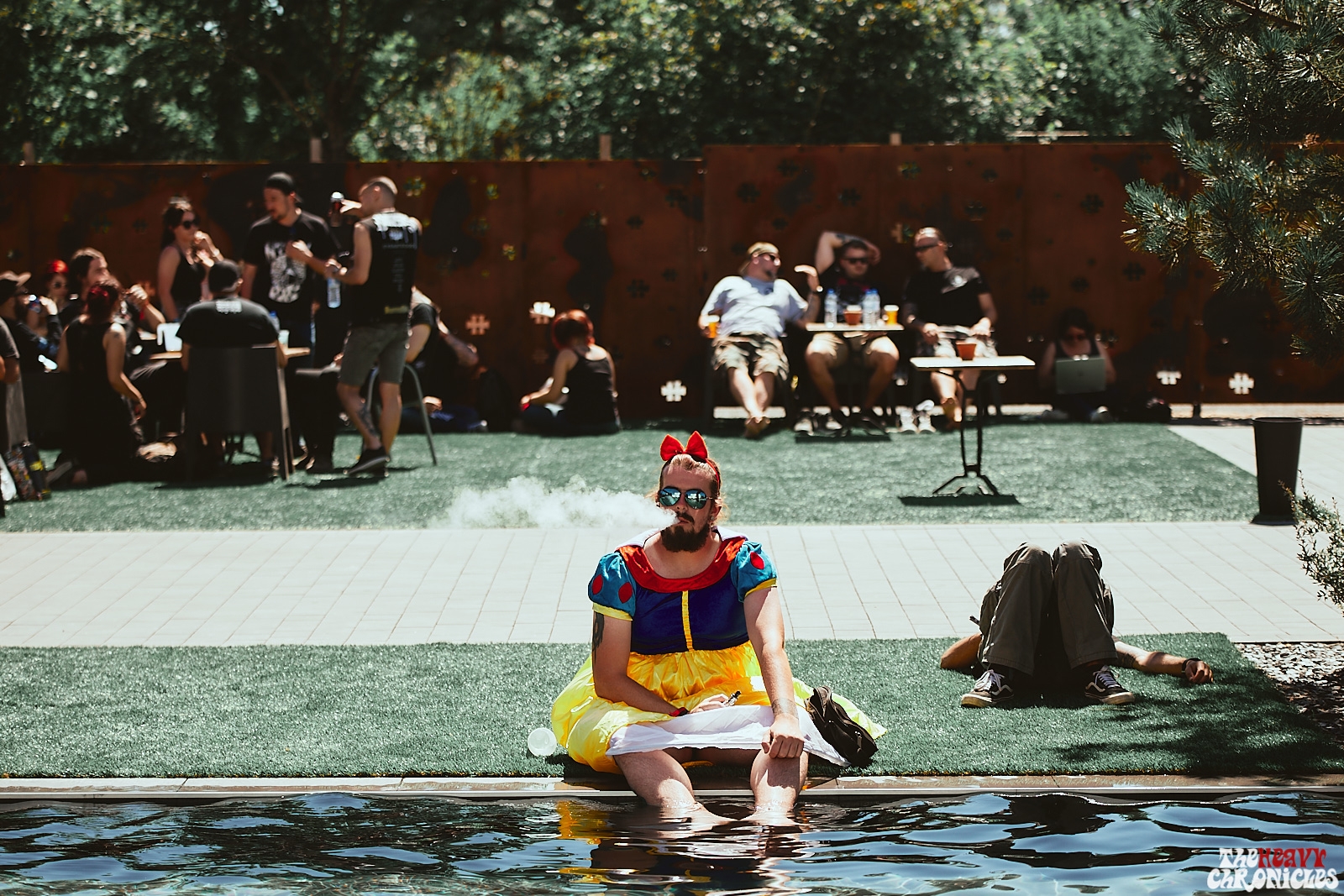 The Valley stage and its heavier than thou lineup are in the spotlight today, with Brittany’s sludgers FANGE kicking off the hostilities. They don’t seem any impressed by the size of the stage and hammer the poor crowd – who’s for the most part hangover from Thursday’s revelries – with their highly aggressive, greasy, massive and filthy onslaught. The sound is still being run in at this stage of the day, yet Fange don’t care and keep on poundering with an unprecedented fury, winning over the Valley crowd.

After such a muddy beginning, I exceptionally stop by Main Stage 1 to see MOS GENERATOR. The Seattle rock veterans were called last minute to fill in for Electric Mary, which is a golden opportunity to reach a wider audience. Thirty minutes is rather short, yet Tony Reed delivers a show worthy of a headlining act, helped by a top-notch sound. The trio is making the fans happy, incidentally, the people who happened to be glued to the barrier shake their butts. Now for a healthy rock’n’roll start, and a good sign of what this weekend is going to be. 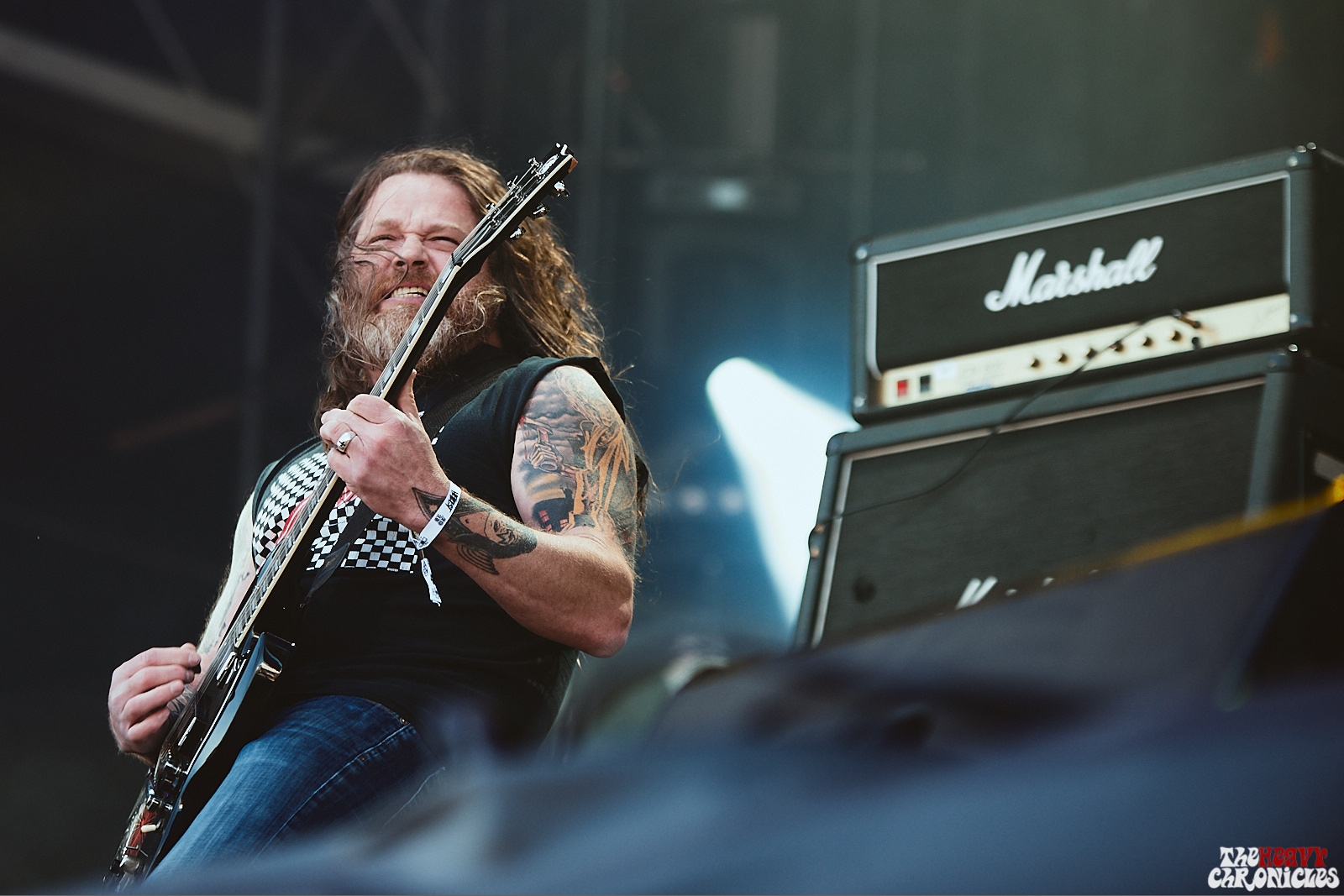 A team meeting prevents me from attending SONS OF OTIS‘ set at the Valley. Their Sabbathian riffs can be heard across the site and to the press tent, compelling me to run and witness their mighty heaviness. We take off, get suddenly crushed by a wall of riffs, then carried away by the Canadian who just made a huge impression among the attendees.

Another Canadian outfit takes the Valley stage: kings of sleaze DOPETHRONE. This is a band I’ve kept missing on stage, so I was really looking forward to this performance, but the band invested Paris streets last night for Stoned Gatherings’ very own Fête de la Musique (France’s Music Day) and I was worried that they wouldn’t be in shape for this show. Breaking news: Vince fried his guitar amp yesterday and is forced to play on someone’s else gear, and let’s say it… it sounds terrible. Because of it, the drummer is having a hard time playing together with his frontman/guitarist. Unable to recognize any song, I’m gutted. The show isn’t completely fucked, but I feel absolutely frustrated of this first experience with the band and really hope I’ll be able to catch them soon for round II. 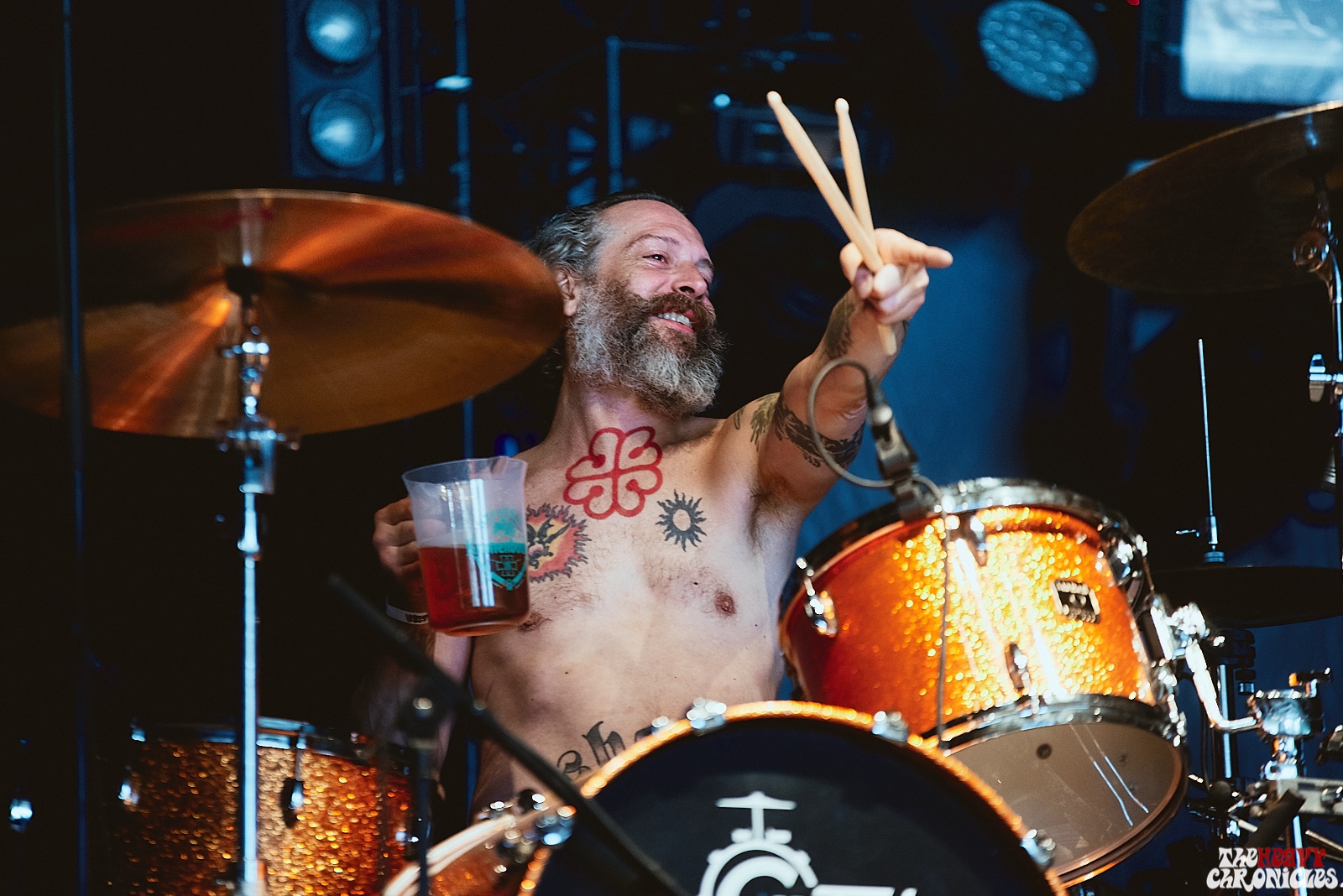 I’m stepping outside of my comfort zone at the Temple, with Switzerland’s SCHAMMASCH. I can hardly get into it despite their sludgy, morbid vibe – I mean, broad daylight is not the better setting for a starter. However, it doesn’t seem to be a problem for the rest of the crowd! On the Valley stage, France’s CELESTE make the most of an unexpected 40-minute mid-afternoon slot to strike us with their depressive post-blackened-sludge-hardcore. They may be a proper oddity, but they totally deserve to be here, treating us to an addictive maelstrom of hopelessness. Time for a Warzone foray to witness the one-off and long-awaited reunion of SEVEN HATE, a French melodic hardcore punk (or ‘punk on wheels’) of the ’90s. The sound is neat, and the band have the time of their life and sounds like they never went on hiatus fifteen years from now.  Their catchy melodies and choruses haven’t aged, Seven Hate treat us to one hell of a “back to the future” set. 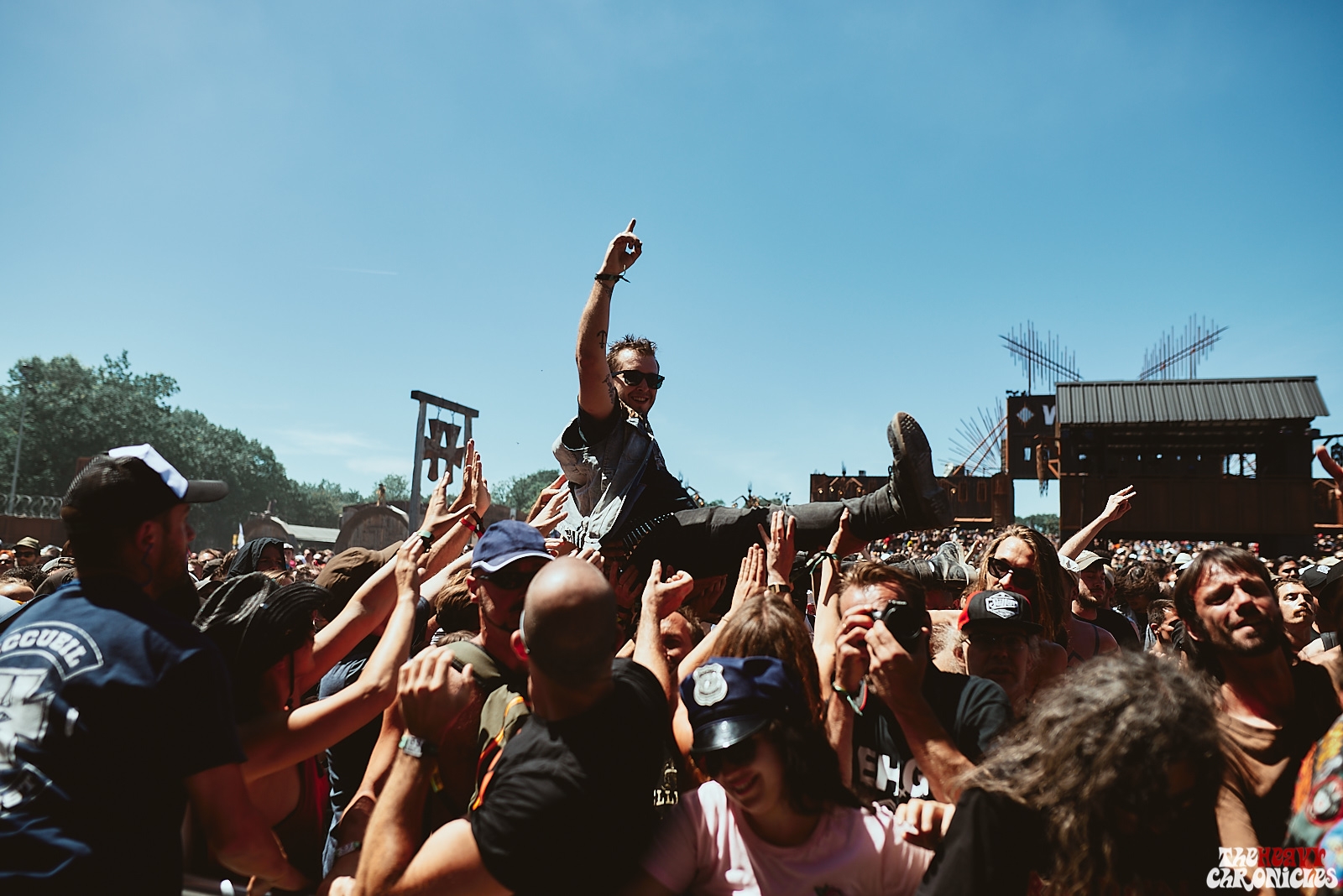 Bongzilla on the Valley stage or CONVERGE on Mainstage 2? I’m curious to see the Boston crew on a bigger stage in front of a lazy crowd waiting for headliners, with their asses stuck on camper seats. I actually wish that those seats were shattered up in the air and people would run away, terrified in front of the untamable US gang led by Jacob Bannon’s shrieks and Kurt Ballou’s epileptic riffs. Such a brutal performance would have torn the Warzone apart, but this main stage set of the 30-year outfit actually does the trick just fine. 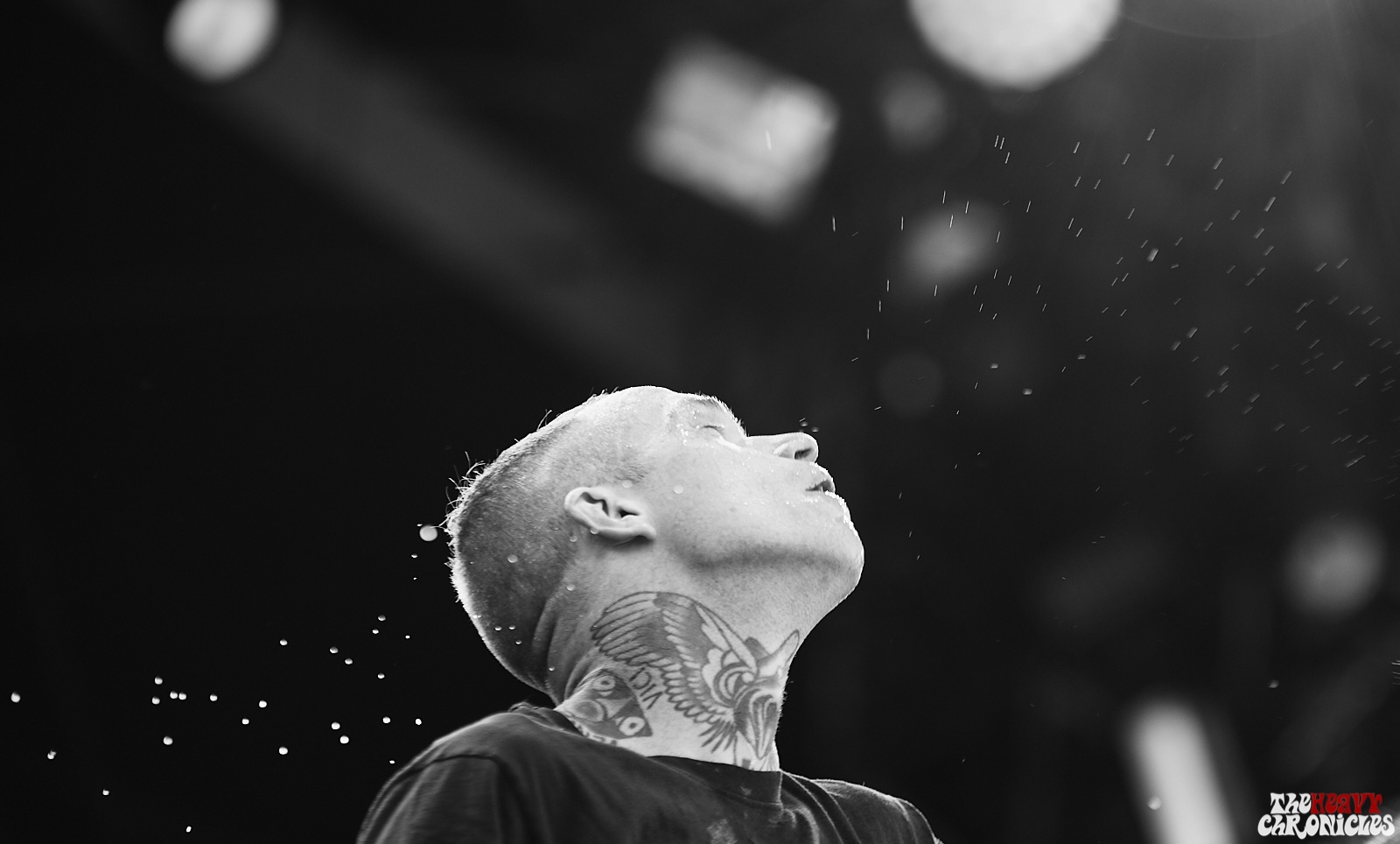 A little bit more Mainstage for me (I’m breaking a record!) with JOAN JETT & THE BLACKHEARTS. It’s not everyday you see such a music icon and member of the Rock & Roll Hall of Fame, and reducing Joan Jett to her all-time classic “I love rock’n roll” would be unfair – she founded a girl punk group when she was 15! This is why she picked her songs carefully, going from punk to 80s FM rock, with an obvious cheerfulness. Delightful! 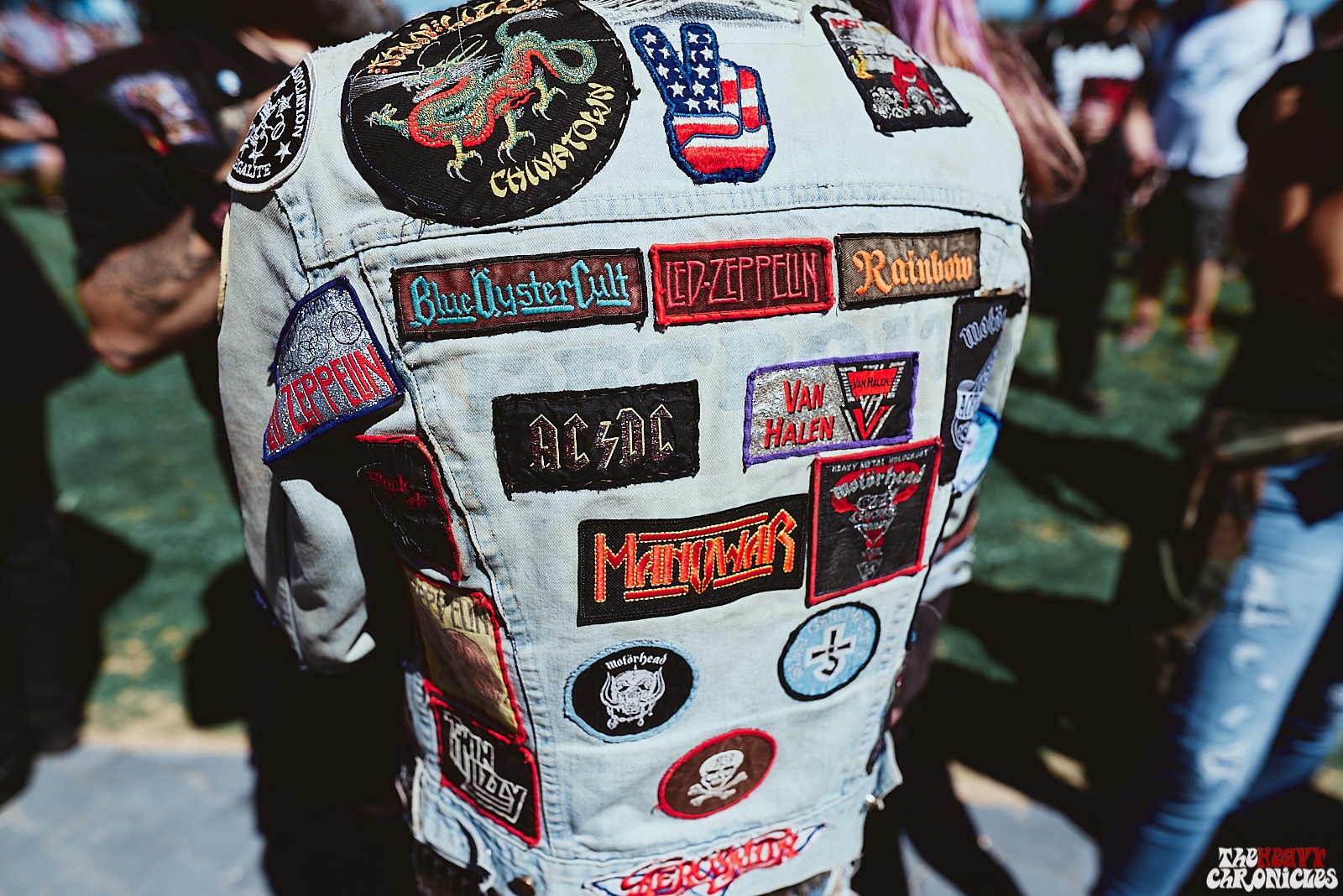 Back in the Bayou now, with NOLA’s sludge godfathers CROWBAR taking over a packed Valley for their fourth Hellfest appearance. Kirk Windstein and the gang give the filthy, hard-hitting goods, bogging us down into their swampy grooves, and damn we like it. We would follow his screams until the limbo, as he imposes the foursome’s hits like a lords upon his lands.

What can possibly happen after a ride into NOLA’s muddy waters? Stand and wait. Wait for what? The mighty coming of Japan’s veterans CHURCH OF MISERY! This happens to be a wise move, as the Valley is now overcrowded. Despite the constant lineup shifts, one thing that never changes with COM is the power of their sonic onslaughts. Tonight’s show isn’t just an onslaught, it’s simply the best show of the day, hands down. From sludge to doom, Tatsu Mikami and his band get deeper and deeper into sleaziness and insanity, ripping our guts to pieces. A Sabbath-worthy slaughter. 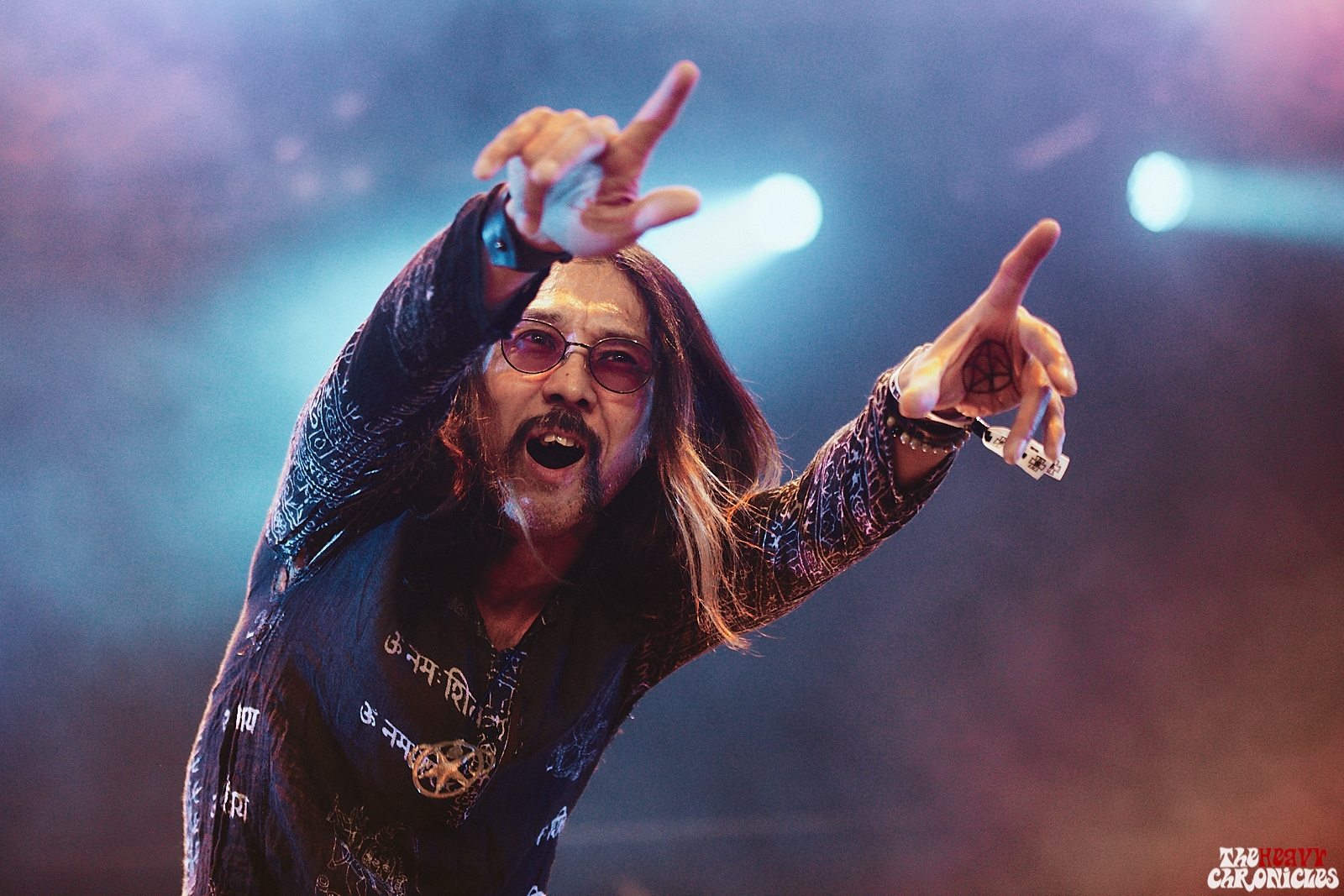 There are few chances that we’d see a better performance today, so we could easily go to bed if needed. No way. Hollywood Vampires are next on the bill! Just kidding, I’ll let Alice Cooper’s cover band to nostalgics, for us heavy fiends are awaiting for the absolute masters of the genre: EYEHATEGOD. Hellfest has been treating us to a proper, crescendo-going sludge lineup today. More dirt, more heaviness, more shrieks, more moshers and crowd surfers: NOLA’s bosses are here and delivering. The air is filled with electricity and the crowd couldn’t go more apeshit. Football supporters would chant: “here, here, it’s NOLA!!!”. I’m too knocked out to yell, and stay put while digging the vibe.

Even if this filth-laden lineup has got me knackered, I wouldn’t miss CORROSION OF CONFORMITY for anything in the world, for two reasons: I didn’t really like the new album (!), and, well… Pepper Keenan. I have to be here. More than just putting on a killer show, COC kicks all living asses around at 1 in the morn’, through a masterful and flawless array. At last, the last two songs on the setlist make me want to listen to the new album more carefully. What a perfect way to end this first day on the Valley! 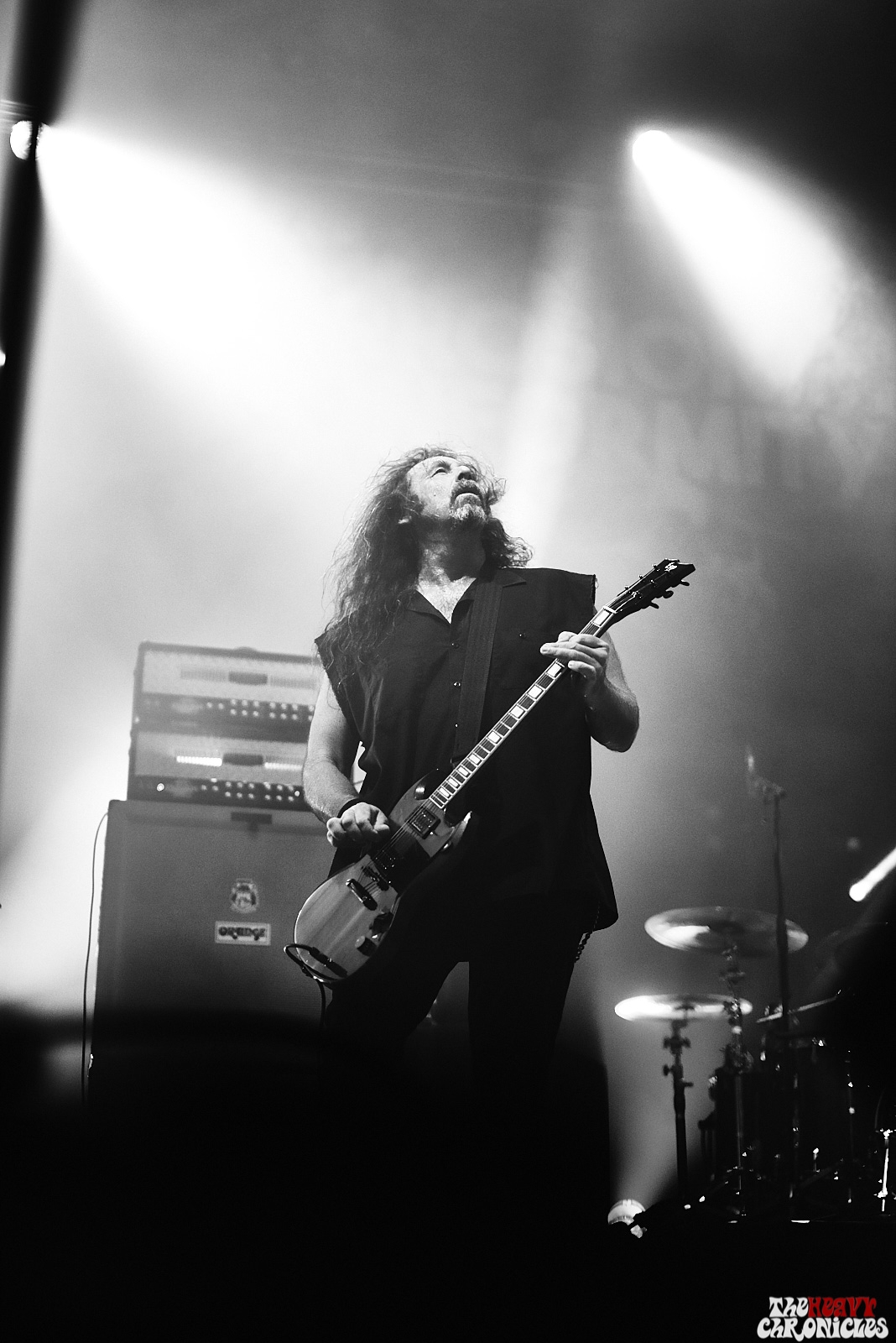 Last but not least, A PERFECT CIRCLE are closing the Mainstage 2. I havent seen them since their London show in 2000, and well, the new album hasn’t won me over that much, so I don’t have much expectations. The setting is stunning, band members standing on luminous platforms at different levels on the stage. We can barely see MJ Keenan’s face, as per usual. The beginning of the set give Mer De Noms star billing, but when the new ones kick off, I can’t help but switching off. Time to let myself go in Morpheus’ arms now, see you tomorrow!