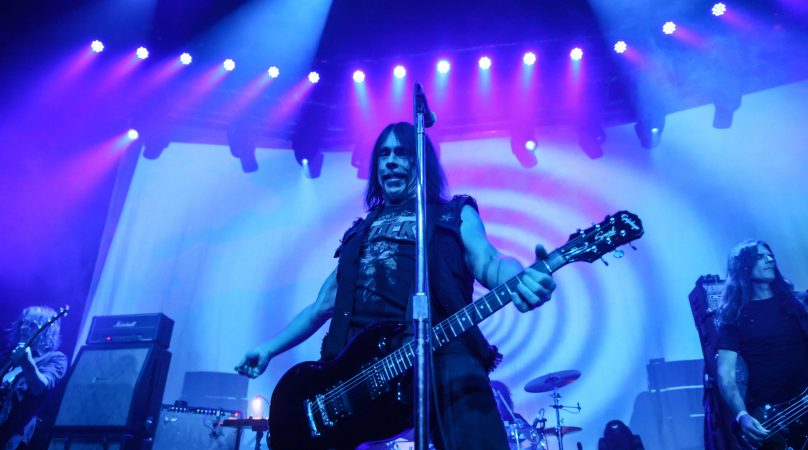 How not to be completely elated when kicking off the third day at DESERTFEST LONDON, with a resounding performance of one of the hypest doom bands of the decade at the spectacular Roundhouse, MONOLORD. Given the legendary headliners that will play the Chalk Farm Road venue, and the absolutely tantalizing lineups of the Underworld and Black Heart, it’s gonna be a long day going back and forth between venues, but hey, Given the what is a good festival if not peppered with a bit of challenge (okay, dilemna)? Let’s roll now! (PHOTOS: JOHN WHITE)

The mood is sorrowful and low, quiet even perhaps, as CHRCH kick into session upstairs at the Black Heart. Shrouded and crawling about the stage like some sort of ghostly wanderer, Eva Rose is thoroughly engrossing and enchanting as vocalist of the Sacramento funeral doomers as they slither into their Unanswered Hymns. The riffs themselves here are incredible, but the under-towing melodies highlight a beauty in modern doom that’s so difficult to perfect. As ‘Infinite Return’ quivers and quakes into life, nobody talks, nobody claps and bodies gently sway as this huge writhing unit of human pain doesn’t so much crush the Black Heart as seep slowly over it like a morning mist in a graveyard with a haunting sense of longing. This is frankly a towering performance and I personally cannot wait to see what this band does next. 3/5 of CHRCH right before their show at Desertfest

Our boys from Boston ELDER already feel like so much of a part of the fabric of Desertfest that we scarcely notice they’re on the bill this year, we just take having the kaleidoscope visuals-backed being present as the norm these days! But this is a very good thing to assume and a short hop on the tube down to the Roundhouse and we’re just in time to watch DiSalvo, Couto and Donovan kick out the jams from ‘Reflections on a Floating World’ before you can say “Heavy Psyche O’Clock”. The now-fourpiece mob from Massachusetts are as ever backed by an insane lights and visuals show which adds almost as much to their progressive landscapes as the band do themselves. Always a firm favourite with the Desertfest faithful, the swollen crowd behold thee Elders as one of our very own as they smash through the likes of ‘Sanctuary’ and the titanic ‘Compendium’. A rather muddy sound mix threatens to mar their overall impact, but Elder still catapult the Roundhouse into the outer galactic. 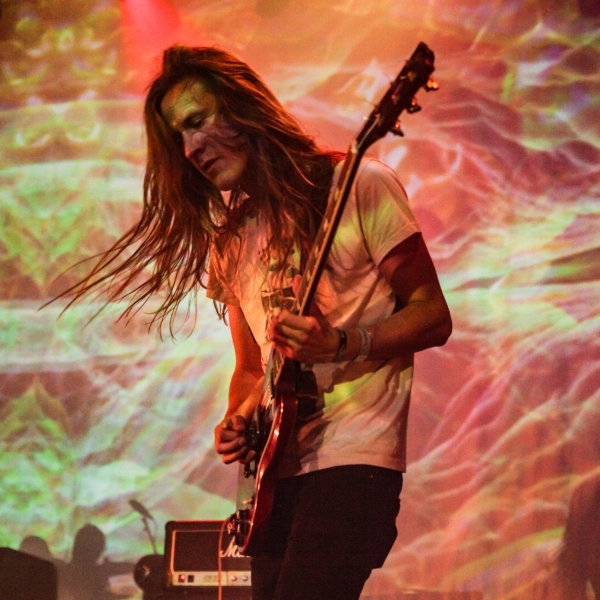 Oh Fuzz Yeah! This is what we’ve been waiting for! LA trio and stoner rock royalty NEBULA are back after far too-long an absence to kick us into the hazy afternoon with some seriously stiff riffage. Opening up with the likes of ‘To the Center’, ‘Perfect Rapture’, ‘Clearlight’ and the timelessly simple lyrics of ‘Smokin Woman’, it’s clear that the stoner anthems Nebula wrote many sand dunes ago have stood time’s many tests. Eddie Glass looks like the coolest rock star in the world has just woken up and crawled back off a beach somewhere with his bedraggled hair, tye-dyed shirt, cheap sunglasses and a beat-up Strat hanging off one shoulder. Although it’s fair to say that Mike Amster (drums) and Tom Davies (bass) aren’t yet at their tightest as a unit, these Californian heroes sure still have the jams to blast us into the cosmos. Glass’ riffs and licks slay us with round after round of pure dirty volume as the Roundhouse dances and boogies our asses into the early evening to ‘Sonic Titan’ and ‘Fall of Icarus’. With Glass snapping an E-string towards the close of the set, the trio somewhat limp through ‘All The Way’ with slightly less superfuzz in the tank and the initial buzz from the start of their set dissipates, but this has still been a blast from the past that we’ll lap up once again in the present. 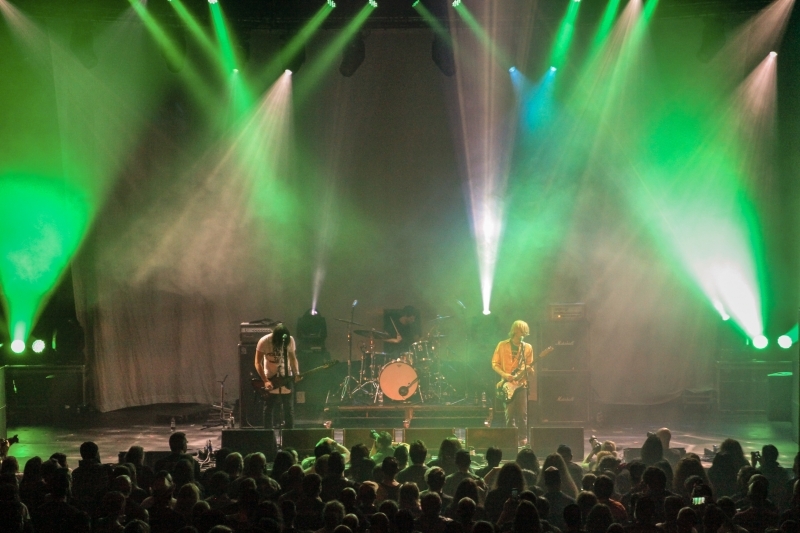 Okay, it’s now time for THC’s most anticipated and absolute heart-stopper of a show of that whole Desertfest weekend. Vancouver’s sludge powerhouse BISON‘s latest album “You Are Not The Ocean You Are The Patient” has effortlessly risen to the top of our 2017 releases, being their most accomplished to date. ‘Are we done with superlatives yet?’ you say. Not quite. The Underworld crowd has been clearly witnessing some Doom of the highest order today, but BISON were the most primal instinct-stirring performance of the day. Like a storm cutting a swathe through that poor old Camden, the tree fellers fling sludgy, post-hardcore-drenched log after log in front of a mesmerized crowd. Brilliant is an understatement.

Now we just need a big fat headliner to see us all on our merry way and MONSTER MAGNET‘s Desertfest London debut is just the tonic. Dave Wyndorf and co are on top form as the ultimate entertainer on the stoner scene sprints around the stage fit, healthy and super-sexily, just like back in the good old days. Opening up with ‘Dopes to Infinity’, the mighty Magnet plough on through a greatest hits set punctuated with newer cuts like the humongous newbies ‘Mindfucker’ and ‘Rocket Freak’. The New Jersey five-piece sound huge and bang on form here tonight inside the amazing theatre of the Roundhouse, even if it’s not quite packed out partly due to a few hundred of us being down the road at the Underworld watching Weedeater’s second set of the weekend. As Dave points to the rafters and squeals away into the night, there’s a strong sense that this is yet another defining moment in Desertfest history, with Wyndorf’s cocksure frontman swagger backed up by Garrett Sweeny and Phil Caivano’s banging riffs and Bob Pantella’s titanic presence behind the kit. With Dave whipping the crowd into a fist-pumping frenzy, Magnet gun this gig like it’s the last day on earth, which even if it was, would still be a great day in our eyes. I’ll certainly not leave behind my memory of nearly three thousand Desertfesters screaming along every word to ‘Negasonic Teenage Warhead’ and of course the anthemic ‘Space Lord’ any time soon, and hopefully neither will the five gents in black too. 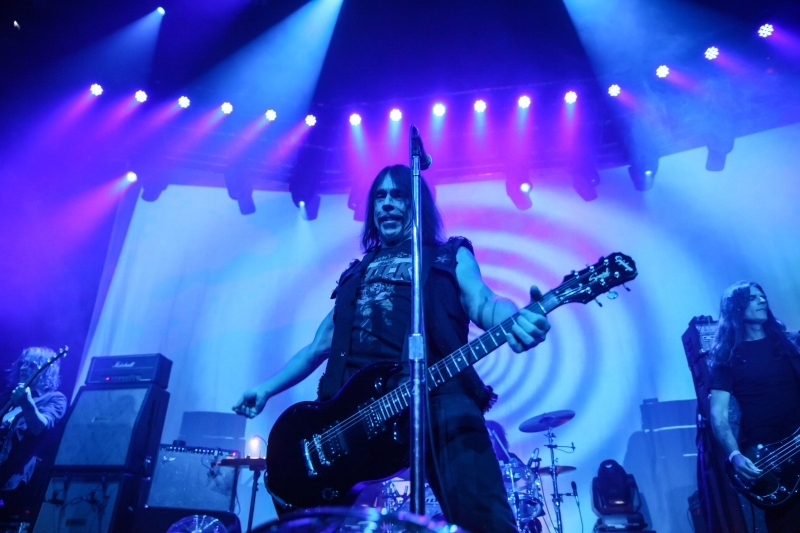 So that’s it, it’s all over, party finito… Or is it? Dutch awesome foursome DEATH ALLEY have other ideas with a special after show set at the Underworld and oh yes it’s absolutely ‘Black Magic Boogieland’ time! Douwe Truijens’ snake-hips and white cowboy boots shake rattle and roll the night away throttled forward by Oeds Beydals dazzling fret work on the six strings as they work in newer numbers like ‘Headlights in the Dark’ and ‘Murder Your Dreams’ from new album ‘Superbia’ alongside the older material. This is one hell of a way to end the party as a crowdsurfer or two take to the skies as Death Alley ram the crowd with blast after blast of retro psyche action – it’s simply an absolutely deadly performance from perhaps the ultimate party rock band in the world right now, tailor made for a festival after party. Truijens actually sets fire to a cowbell during ‘Stalk Eyed’ before Death Alley close down Desertfest in style with a great Iggy Pop ‘Search and Destroy’ cover and of course a fucking massive dose of ‘Supernatural Predator’ to see us all off sweaty and raving into the night.

When all’s said and done, that was one beast of a weekend. Hats off to all involved from organisers Jake Farey and Reece Tee, right through to the people looking after us, selling us merch and pouring us pints. It’s an honour to see this scene and festival flourish in the warm Camden sun. As for the formula I mentioned, well, it just keeps on delivering the results. So same again next year? Shit yeah! And we’ve no doubt that 2019 will kick even more rump than ever before, so rest up, put your feet and your liver on ice and stay heavy Camden.