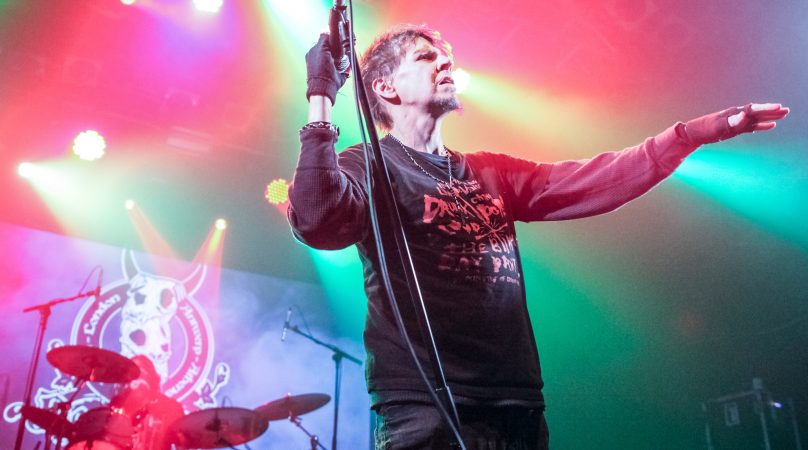 DESERTFEST LONDON, much like the music it showcases, is a formula. Every year you pack the same bag, hop on the same train or flight, see all those friendly and familiar faces outside the Black Heart and massively overspend on merch and beers. Now into its seventh year and going from strength to strength, the UK’s premier stoner, sludge, doom and psyche fest is back once again and packing in even more stages, riffs, pints, beards, battle jackets and excited punters than ever before. But it’s a fantastic formula; a formula that each and every time works, every time. So the sun’s out, the beers are chilled, the bands for t-shirt bingo have all been painstakingly selected. It’s time to do a Desertfest! (PHOTOS: JOHN WHITE)

Those ever-loveable and dry-witted Suffolkwits OLD MAN LIZARD kick things into gear at the ever timely hour of 2pm downstairs in The Underworld’s dank darkness. Jack Newnham’s powerful but jerky and dynamic riffs couple with Gav Senior and Dan Beales’ robust rhythmic grooves as the British trio swagger through a solid set of chunky but intelligent heavy rock. A strong opening act for this weekend of volume, OML seem to ooze with more and more confidence with every gig that passes their way. With the chunky yet funky likes of ‘Trees Fall Down’, ‘Snakes’, ‘Return to Earth’ and ‘King Kong’ on display, the ‘Liz deliver a Taint-esque muscular performance that yet somehow defies most of the regular genre pigeonholes. I think we can consider this packed out crowd suitably warmed up!

THE BLACK WIZARDS may have an overly simple name, but these Portuguese rockers play their country-folk-layered heavy psyche with both huge passion and outright finesse. Guitarist/vocalist Joana Brito is the undisputed focal point, her wild hair thrashing through the aircon-cool Underworld atmosphere atop her sickly sweet guitar solos and soaring vocal lines. A few early guitar issues for Joana aside, who requires a full guitar head replacement after just one song, The Black Wizards peddle through 45 minutes of heady, acid-torched Californian-desert jams in the vein of Blues Pills, Radio Moscow and Earthless. Solid, but perhaps not quite the most spectacular band we’ll see all weekend, these noble Wizards groove us away into the middle of the afternoon Camden glow. 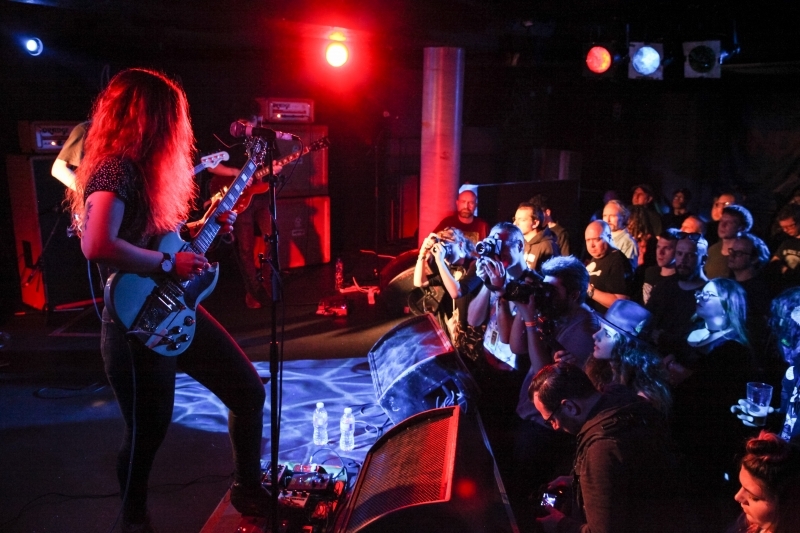 Greek powerhouses PLANET OF ZEUS are slamming the first crowds at the maze of nooks, crannies and balconies that is KOKO with wall after wall of heavy riffing euphoria. Their head-banging metallic jams and feel-good choruses feel big enough to grace any stage from club to stadium today as a healthy number of voices from the audience join Babis Papanikolaou’s energy-laden performance behind the mic. Ever the Gods of the groove, PoZ look like they’re having the time of their lives up there as t-shirts fly from behind the merch stand and into a throng of waiting tote bags and cargo short pockets.

It’s almost too packed to squeeze into a now rather sweaty Underworld for a flutter of the BLACK MOTH‘s wings, but we manage it. Harriet Hyde leads the Leeds-formed rockers through dose after dose of in-the-pocket riffage and elevated vocal plains. With new(ish!) guitarist Federica Gialanze adding a seemingly heavier weight to the likes of ‘Moonchild’ alongside the quirkier bounce of the older numbers on show, Black Moth are greeted to their ever warm hero’s welcome in blackened belly of the capital. 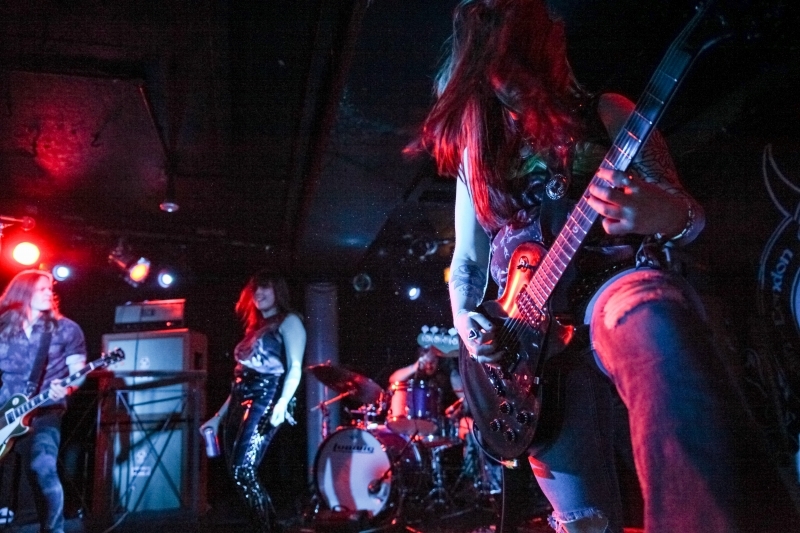 “Turbocharged bangers” is pretty much the only way to sum up the onslaught that is ZEKE. With Dayne Porras’s ridiculously rapid-fire drumming near-deafening all within a 5-mile radius, Blind Marky Felchtone’s barked snarl is as iconic as ever as the revitalised foursome rampage through an hour of punk-as-fuck noise at the KOKO. Yes it’s a simple formula and yes it’s so breakneck you can barely comprehend the breaks between songs let alone head-bang along to the groove, but Zeke’s monster truck approach, plus Marky and new whippersnapper guitarist Kyle Whitefoot’s near-constant ligament-defying guitar solos are every bit as exhausting to watch as they appear to be to play.

Another mad dash up Camden High Street brings us back down once again to The Underworld where stoner rock heroes FREEDOM HAWK are kicking out their sweet brand of rhythmic desert rock. This is music for putting your Camaro top down to and chugging a few cold ones on your way to the diner as T.R. Morton’s sickly Ozzy-like vocals penetrate the groove of the Hawk’s trippy, hazy fuzz riffs. It’s not rocket science in formation, but few bands this weekend will be able to match Freedom Hawk for their genuinely wholesome stoner vibes. The crunchy romp that is ‘Blood Red Sky’ is a particular highlight as well as the more freshly cut chug of ‘Solid Gold’.

KOKO is packed to the rafters for one of the few true lords of doom: Wino and his latest incarnation of THE OBSESSED. As ever the force of the riff is strong with the trio who now also feature Reid Raley formerly of Rwake on four-string rumbles and Brian Constantino on drums. Blending new material like ‘Sodden Jackal’ and ‘Be The Night’ from the sublime new album ‘Sacred’ with older smash hits like ‘Hiding Mask, ‘Way She Fly’ and ‘Streetside’ makes for a formidable setlist as Wino’s pinched snarl dominates over the weighty bass crunch. The sound isn’t as clear here now as it has been for some of the other bands on the same stage today but that doesn’t stop us all going fucking mental to the epic that is ‘Skybone’ and the closing shot of ‘Mourning’ 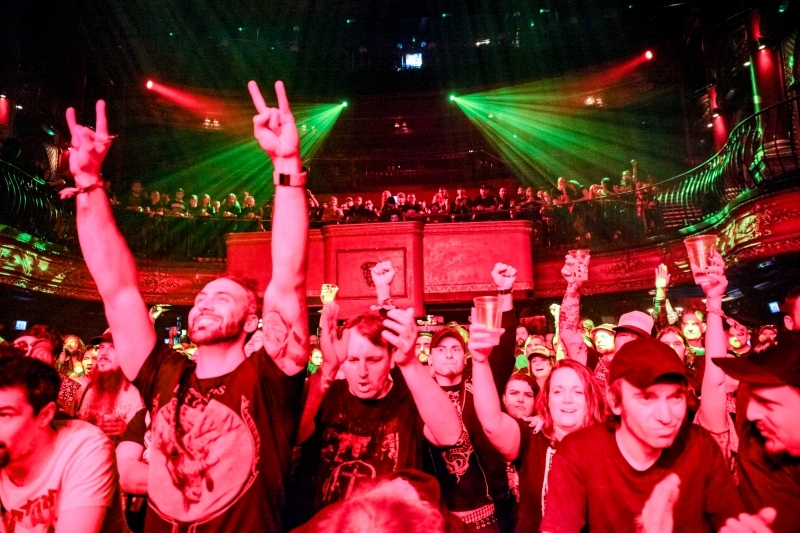 The night is wearing on and many beers have clearly been quaffed by the Camden faithful who all go accordingly ape for our boys from New Orleans, EYEHATEGOD. You know the fucking score with the kings of sludge: ’30$ Bag’, ‘Blank’, ‘Shoplifter’, ‘Agitation! Propaganda!, ‘Medicine Noose’, ‘ Revelation/Revolution’, ‘Sisterfucker’ and of course the mesmerising ‘Take As Needed For Pain’, it’s all here and it’s all just as good and filthy as it always is. A revitalised (although apparently still high!) and more closely-cropped Mike IX Williams is on top pit-whipping form as he snarls over the din of Gary Mader and Jimmy Bower’s riffage. They might be a man down tonight without Brian Patton present on rhythm guitar but that doesn’t stop EHG being just as potent as ever. 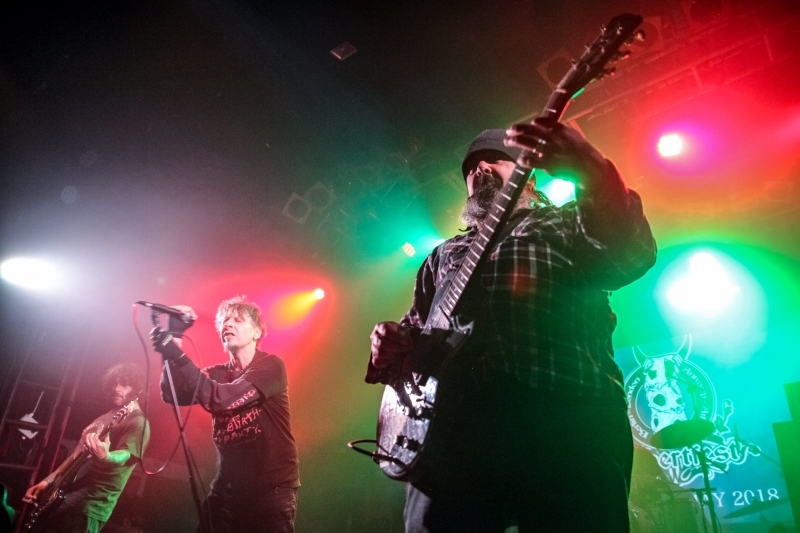 The upstairs at the KOKO has finally been opened, meaning the usual caverns of places to sit down and sneakily watch the bands can be appreciated by all of us with street-weary feet. Headliners GRAVEYARD are here and are as ever their ever energetic, bouncing retro selves. Marvellous tasches and elaborately patterned shirts are out in abundance, as are the Swedish foursome’s penchant for catchy licks, psychedelic grooves and Joakim Nilsson’s glorious, earnest vocal hooks. This might perhaps not be the hugest-sounding set of today after the enigmatic Eyehategod but the sincerity of choice cuts like ‘The Fox’, ‘Ain’t Fit to Live Here’ and ‘Uncomfortably Numb’ remind us all of just why we fell in love with these Scandinavian masters of the vintage sound revival.

WHITE HILLS might have had a little bit of a switcheroo with Ego Sensation now behind the kit as one half of a stripped-back, bassless duo tonight but that doesn’t stop her and guitarist Dave W being just as crazy weird and psychedelic as ever at the Black Heart. I wished I’d seen more of this but I was approaching a personal record for most bands seen in one Desertfest day and couldn’t stop just yet! 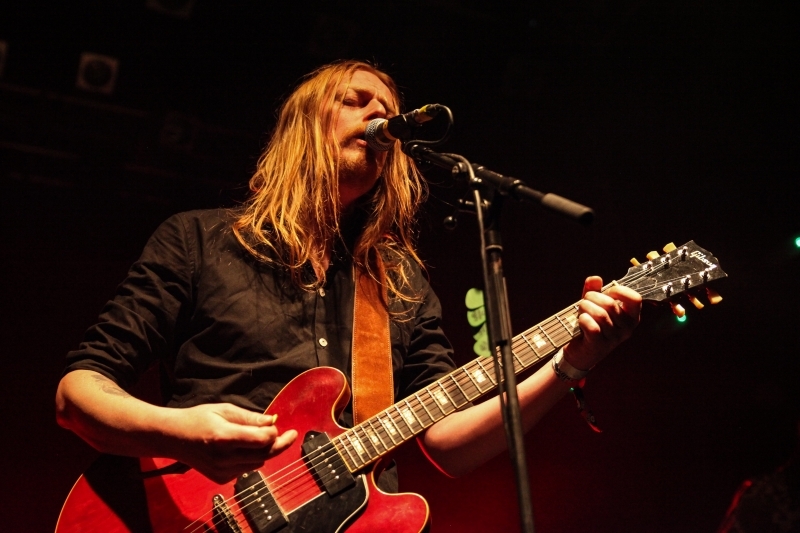 NAPALM DEATH never change do they? The grindcore legends shut down proceedings at the Electric Ballroom in style, ploughing a packed crowd with buzzsaw riffage, devilishly rapid short sharp shocks of furious punk carnage and a socio-political rant or two as ever from Barney. With Planet Earth now successfully scorched, it’s off to stand outside the Black Heart to get thoroughly sozzled and count how many Sleep tees we can see. The answer? Billions and billions.