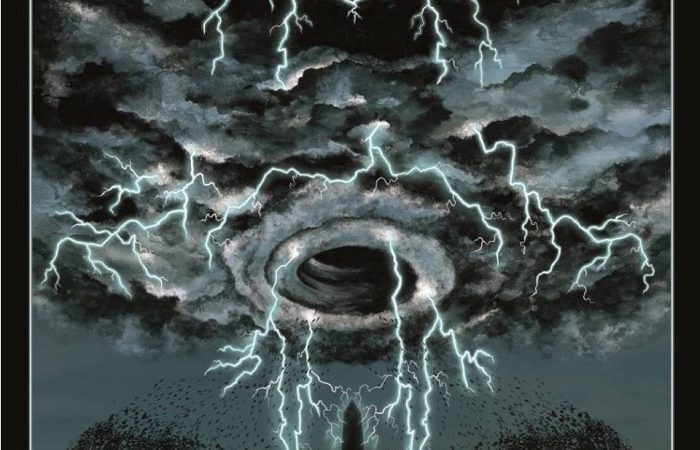 German doom… How to put aside all my preconceptions about this scene and listen to a band objectively? The crushing, psychedelic and ethereal atmospheres created by our neighbors usually don’t move me that much, maybe purely out of contrariness, or simply because my tastes tend to distance themselves from the mass. But back to our topic: OBELYSKKH released their fourth album in eight years, and I must admit I’m totally discovering the band here. And this is probably the best way to weigh in on The Providence.

The Providence is a one-hour long six-track piece that doesn’t hide behind its influences and put them to the fore all through its course, the artwork depicting an outburst of nature’s elements while alluding to hereafters, whether they are spiritual or related to sci-fi novels.

The album preamble sets the tone straight: it will be Heavy or it won’t be. OBELYSKKH crafts doom atmospheres that are quite hard to describe, for they go beyond any comparison within the genre. Mesmerizing as hell, the pounding riffage is carrying the listener away for a trip in the darkest of realms, which may still make you wanna bang your heads, with your spirit and soul giving way to this creature reincarnated as a sheer distortion-driven message.

And just when the instruments carried you away, vocals loom. By turns, they rub us the right psychedelic way in the form of devilish incantations, or just beat the f*** out of us like screams reminiscent of sacrifices meant to turn our world to a sonic chaos. All this on the same track.

The bass sets the pace and tone, crushing everything on the forefront, even though it can also make itself scarcer while remaining just as crawling and skull-grinding ; yet, the guitar is the real deal on this album, being groovy as hell and even blues-laden at times, without ever showing off or sounding like a doom stereotype. It gets you hooked on their peculiar brand of doom. Powerful, methodic in its progression, OBELYSKKH continuously fires off with the charm and agility of a bulldozer moving mountains, leading us to the unavoidable outcome of getting buried under The Providence. We want more.

Surprisingly, the über-monolithic facet of The Providence is actually an asset, as it perfectly showcases what the band delivers best: a dangerous doom weapon that can become very infectious for the audacious (and open-minded) listener. The Providence, hailed by The Lord.