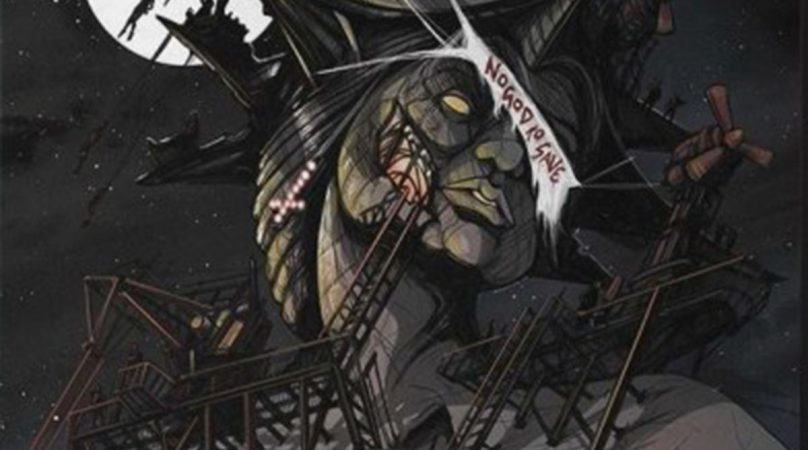 With two self-released EPs and their debut full-length Slab City on Napalm Records, the London rockers are releasing their second outing No God To Save, this time on #1 US stoner stable Ripple Music – oh them vinyls! A few years back, STEAK were telling us they didn’t need anyone – even less a label – to release their records, so the offer must have been up to their talent, and neither Napalm not Ripple should be regretting making the move. Whilst the 70s retro rock trend is bringing out as many quality releases than there are drops of water in the Mojave desert, releasing a riff-laden, hook-driven stoner rock album is guaranteed to satisfy all heavy music fans.

STEAK resume their steamroller riffs where they left them on Slab City, i.e. in a piping hot desert. First track “Overthrow” definitely pays tribute to the foursome’s influences, and it’s hard not to think of a legendary desert rock outfit when spinning it. Once the intro and its kicky build-up are over, then STEAK with a capital S enters the arena, playing far from all stoner rock commonplaces by nurturing such unique vocals and songwriting that you wouldn’t be able to compare them to any other stoner rock outfit in the scene.

Each one of the eight tracks really develop its own identity, melodies and choruses, to be fair I haven’t found one song that outdoes the other, or stands out. Don’t get me wrong, I’m not saying they’re all identical or monotonous, it’s quite the opposite, actually: all songs are so good and make you want to go on exploring the record and get some more. I have a weakness for “King Lizard” (perhaps the grunge vibe, Kipp’s voice may have a lot to do with it), guitars playing hide and seek with drums on this rock rollercoaster. “Living like a rat” has by far the catchiest chorus on the whole record, and proves that STEAK has honed their own trademark sounds and did well getting signed.

The tension never dies away throughout the course, every song being crafted to get you hooked… until the very last delivery “The Ebb”, and its spacey instrumental outro.

No revolution in here, No God to Save simply showcases the growth of a band who master their own formula, a heavier, refined, more massive but also more melody-driven formula. This sheer sense of melody (without degenerating into schmaltz or patchouli-scented stoner) is quite rare among the stoner rock scene, and STEAK are natural at it, something that’s in their DNA, something they probably inherited from Britain’s pop rock legacy. No God To Save confirms that STEAK has taken the helm of the UK heavy scene and are not meant to let go! Can’t wait for a batch of French dates!