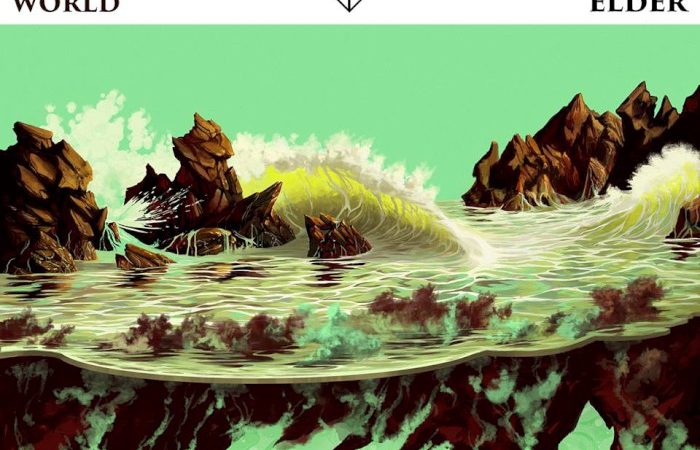 As I write these lines, Reflections of a Floating World has already been unleashed upon the world. And upon you, dear reader – or else, you really must rethink your priorities. Since both of us have already been thoroughly pumelled by ELDER‘s awe-inspiring album, you may understand the great solitude that struck me, when I discovered it a few weeks ago. « How am I supposed to review that ? »

How, indeed, could the poor blogger express with mere words the magnitude of Elder’s latest opus? How could he « criticize » the work of artists whose musicality and virtuosity expand so vastly beyond his own? Track-by-track analysis is out of the question. Sifting through « Sanctuary », a mighty opening track honed on countless concert stages, would already take a full page. Besides, who would want to dismember, dissect, pin down such a whole and immersive listening experience?

The utter impredictability of these songs is clear from the outset. Most likely emboldened by Lore’s success, Elder advanced on the prog rock path they had so brilliantly carved. The average life expectancy of a riff in Reflections… is low. Very low. All parts flow together with amazing fluency and mastery, building epic sonic monuments brick by brick, comfortably clocking over the 10-minute mark. Through the richness of his keyboard layers and the inspiration of his guitar solos, Nick DiSalvo establishes himself once more as the keystone of Elder’s sound. Good news: his vocals, who’ve never been the band’s strongest asset, have kept on improving. Nick can now dig into a larger reservoir of tones and, more importantly, emotions.

At work around him are a growing number of brilliant musicians. The rythmic duo formed by Jack Donovan (bass) and Matt Couto (drums) inches ever closer to the Bonham/John Paul Jones combo. Their groove provides reliable support for the complex melodic work done by DiSalvo, who lets them shine through in several impressive instances (« Staving Off Truth » around 5:00, « Blind » shortly before 11:00). Two guests on guitar and pedal steel further thicken the monumental sound of our the power trio, which will evolve into a power quatuor for the upcoming EU and US tours.

Though still far from becoming studio creatures, Elder appear keen on further exploring their recording possibilities; evidence of this evolution is sprinkled through the album. Super-roomy drums here. A crackling, distorted intro there, in the fashion of Outer Limits – a sixties television series, whose mythical introduction provides a most fitting description for Reflections of a Floating World: « there is nothing wrong with your television set. Do not attempt to adjust the picture. We are controlling transmission. If we wish to make it louder, we will bring up the volume. If we wish to make it softer, we will tune it to a whisper. […] For the next hour, sit quietly and we will control all that you see and hear. […] You are about to participate in a great adventure. »

Control (from the band) and adventure (for the audience) are distinctive characteristics of Elder’s latest masterpiece. Spin this record as much as you like – you’ll never hear the same thing twice. The mindful listener will dig new musical nuggets each time, in a demanding yet incredibly rewarding experience. He or she will learn to love even the most disconcerting bits, such as the very krautrock « Sonntag », endless intro to a track that never comes. He or she will dive head first into the wildly ambitious universe of our Bostonian friends, now spread across two continents but showing no intention of slowing things down.

Recently, Nick DiSalvo shared with Outlaw of the Sun how grateful he was for the chance to make Elder known before the « stoner rock bubble » began to burst. The trio’s progression since its beginnings in 2006 appears, in light of this new tour de force, quite unique indeed. With such a plethoric offer of new bands, how many will get the attention and confidence they need to persevere? To create their own musical space, getting better and better at exploring and expanding it? Only time will tell. In the meantime, we’ll always have Elder.