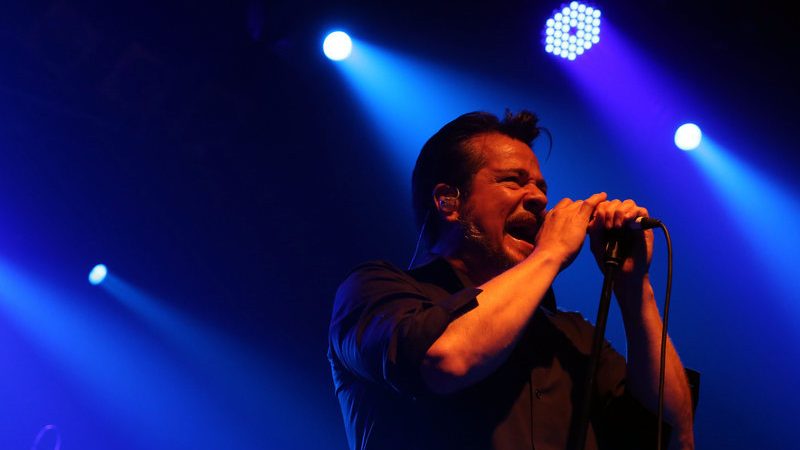 Riffing away in the world today takes everything you’ve got…
Drinking some beers with all your buddies, sure would help a lot!
Wouldn’t you like to get away…?
Sometimes you wanna go… Where everybody knows your bandname!
And they’re always glad you came!
You wanna be where you can see, as people, we’re all the same!
You wanna be where everybody knows your bandname!

Whether you get the reference or not, Cheers to you! This is DESERTFEST LONDON 2017 in Camden Town! Three more days of sinking more pints than bands, shouting to be heard over the Black Heart’s PA, bigging up Reece Tee and Jake Farey for putting on the most obscure heavy bands in existence and eating way too much takeaway. Same as last year then? Cool! We wouldn’t have it any other way! (PHOTOS : Gloomy Lights Photos)

London based superdoomergroup GRAVE LINES kick off proceedings in front of a crowd-size not to be sniffed at in the particularly dank and gloomy Underworld with their macabre brand of down-tuned trouble n’ strife. Julia Owen’s off-beaten bombast behind the kit and Ollie Irongiant’s, errr, gigantic riffs rule this roost and topped off with Jake Harding’s blistering rasp cackled over the top on the likes of ‘Extinction Pill’, they’re a solid way to kick off this weekend of amplifier abuse.

Over at the Black Heart, BLOWN OUT prove their credibility as a Ronseal band and do exactly what they say on the tin: Tripped out, far out and, well blown out heavy psyche of the highest instrumental order. Is that Mike Vest in there behind the hazy air and a fluffed up shirt collar? It certainly is and his latest venture with members of Pigs Pigs Pigs Pigs Pigs Pigs Pigs reach for the stars on every elongated riff and 10-minute spacier-than-Kevin-Spacey cosmic nods to a dimension beyond our very own. Like a heavily stuffed Amon Düül, Hawkwind and Bong baguette, Blown Out go down a tasty treat as the upstairs of the Black Heart begins its as-ever-sweaty adventure.

Greek Gods of the fuzz 1000MODS sure know how to party and a crammed Electric Ballroom is certainly up for their offering of Deserted grooves and backwater riffage. Drummer Labros in particular plays like his life depends on it as their odes to Kyuss on the likes of ‘Above179’ and ‘Road to Burn’ sink in and shimmer across the tarmac of Camden High Street. Though it must be said as the awesome foursome plough on with the likes of ‘Loose’, their brand of stoner rock begins to feel a little stale and outdated as those riffs cruise their regular course off into the night. 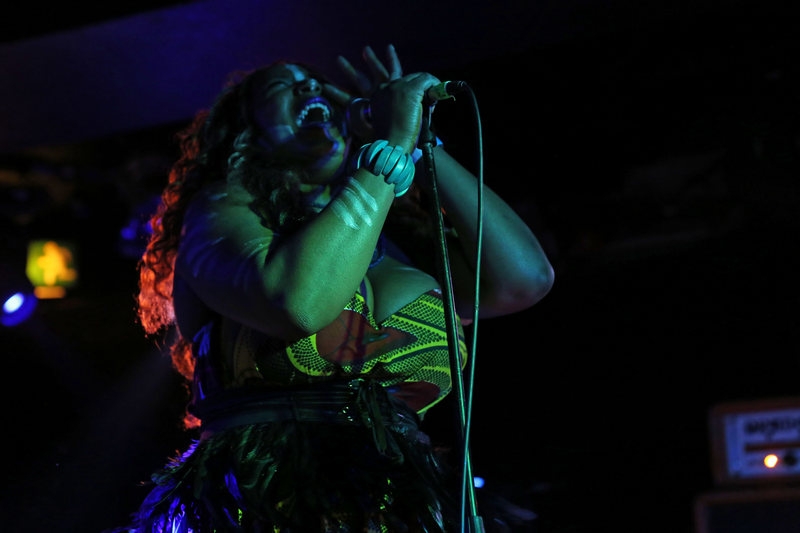 Some bands are just property that’s too hot to contain and right now London’s psyche-stoner-thrash-gospel-punk-voodoo masters VODUN are one such band. Their leftfield atomic bombast of African street music, feminism-driven vocals, stoner doom riffs and heart-wrenching soul music is sumptuously raw and gloriously powerful in front of a completely packed-out Underworld crowd. Drummer Ogoun has to be one of the most aggressive yet perfectly executive stick-wielders out there on the live scene today and combined with Marassa’s outrageous punk metal riffs and Oya’s deliciously all-encompassing vocals from a realm far beyond our own, Vodun set a high bar for this festival in terms of quality and originality that many will struggle to surpass. With the likes of ‘Kanpay Rejecte’ in their arsenal as Oya’s enchanting swansong, they have the Underworld in the palms of their hands. Utterly unique, believe the hype and then some.

Love fuzz? Love riffs? Love Kyuss? Then get ready to lose your shit for the rest of this Friday night! First up are the ever meaty gravy-train of STEAK. Smashing headlong into the likes of ‘Liquid Gold’ and a bunch of new material from ‘No God To Save’ along the way, guitarist Reece brings riffs from a time once lived but never forgotten as Kippa’s soulful refrain keeps vibes a-pulsing as we head off into the golden desert sunset once more.

Throbbing basslines? Stark Scandinavian accents? An abundance of denim? It can only be LOWRIDER lifting the roof off the Electric Ballroom! Opening with a killer rendition of ‘Caravan’ and following up with a raft of new fuzzy bangers, the thankfully reactivated Swedish four-piece set about business by pounding out riffs and rhythms from floor to ceiling as the Ballroom massive coo and cheers en masse to their slick, downtrodden stoner hymns. The Lowrider set is a truly triumphant mishmash of those ‘Ode to Io’ classics with some sizzling new material and all polished off with more fuzz and distorted guitar wailings than is truly fathomable. Of course. 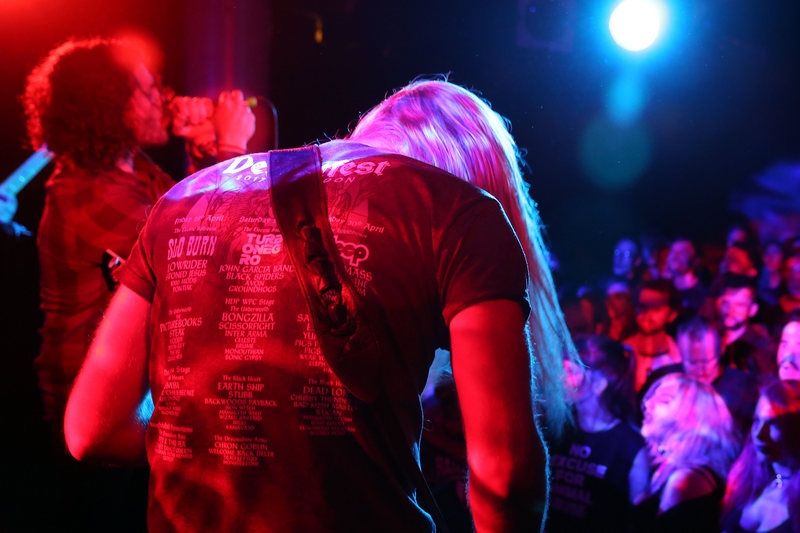 SLO BURN arrive on stage at the Ballroom to swooping light projections and a hero’s welcome. It’s still somewhat odd to me to have a festival headliner who, in spite of singer John Garcia’s obvious fame via the likes of Kyuss, Unida, Hermano and his prominent solo outputs, never actually released more than one EP (‘Amusing the Amazing’ all that way back in 1997) or played live for any significant amount of time. It matters not tonight though as the appetite to hear some of these long-lost, sand dune-dusting tunes is frankly lip-smacking for many in the audience. As the original line-up strides out and breaks into ‘Muezli’, the Ballroom erupts in a mass throng of hair, beer, stoner ecstasy and more beer. You gotta admit, Garcia sounds fucking unreal on vocals out there tonight and with the full original line-up of Chris Gale on guitar, Damon Garrison on bass and Brady Haughton on drums completely reassembled, this would appear to be The Real Deal. 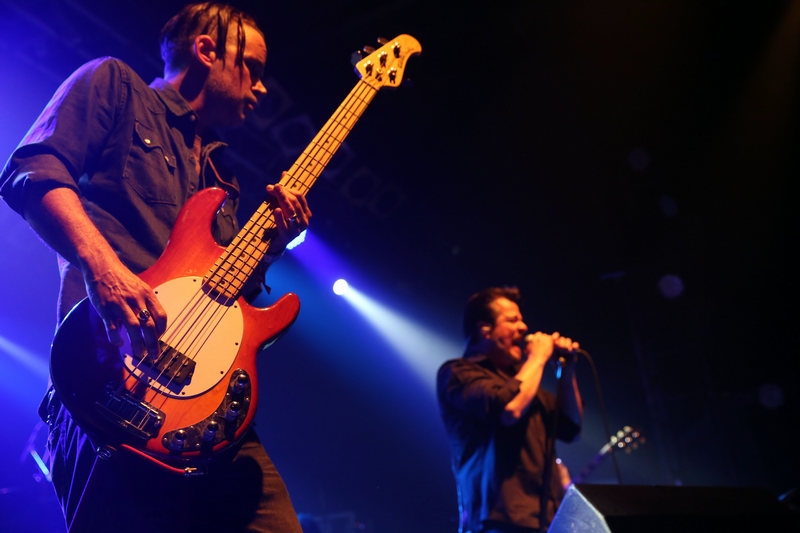 ‘The Prizefighter’ goes down with all the applause and cheers it fully deserves and it’s great to hear the never-released likes of ‘Snake Hips’, ‘Cactus Jumper’ and ‘Positiva’ getting an airing in all their riff n’ drawl-soaked glory, rather than those grizzly versions hidden away on Youtube. However, it’s all about that pounding opening drumroll and the elongated vocal identity of ‘July’ behind its hard-cruising riff that eventually gives way, of course, to an encore solely dedicated to… “I SAID A PILOT, A PILOT! I SAID A PILOT THE DUNE!” The Ballroom loses its collective shit to Slo Burn’s closest thing to a hit single, while John Garcia rules the stage, triumphantly and deservedly so.

With another set of desert rock classics from the big man to come tomorrow, the question begs: has Desertfest ever been so close to the sounds of Palm Desert, California in the mid-’90? Perhaps not. The other question on my mind now is: pub? Yes, pub! Black Heart? Well, I’ll see you there!