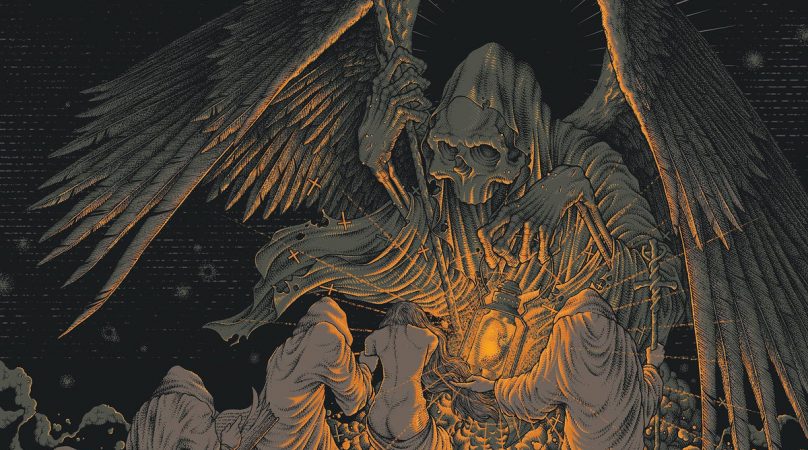 DOPELORD is a stoner doom foursome hailing from Poland’s burgeoning heavy scene – among which are counted Belzebong, Sunnata, Spaceslug, Major Kong – who just released their third album Children of The Haze. While the name is anything but equivocal about their influences (the magic herb!), the band also claim their music to be 70s-infused and inspired by retro flicks. Let’s now unwrap the mystery around that Children of The Haze…

Behold, as you’re now entering the new wave of Doom, first initiated by the Wizard, definitely leaning towards the occult and taking you into psychedelic lands for an endless journey in the depths of your subconscious. The guide warns you straight away: invoke the holy smoke and let your mind drift away in this unknown place deep inside of you. Pounding all the way, riffs lay on a heavy drumming that uplifts you to another level of consciousness.

As you’re now high on that smokey atmosphere and ready to go further, you stumble upon an evil preacher. Escaped straight from Québec and his throne, his bloodcurdling incantations on top of infectious riffs and berserk drumming drag you away from your torpor and send you on the other side of the river, where bad seeds grow over the corpses and souls of long lost wanderers…

Those who escaped the moment of lunacy will find their way to redemption. Just like descendants of the magic haze, they’re driven to yet another level of consciousness by mermaid-sounding vocals, at the whim of subtle, ethereal yet deeply catchy guitars. This is where you’ll be able to rest in peace, in the middle of skulls and incantatory candles. ‘Rest in peace’, for you were the human sacrifice now cleared of all sheath, and your soul can now let go and enjoy this new state, plunged, buried… crushed under Tomasz’ slow, mammoth pounding. When standing on this ford that will soon lead you to the end, you get back to life on the dry impulse of a bass and a suddenly uncontrollable guitar solo. You quickly run towards the distant light, caught in a mad race across the pit.