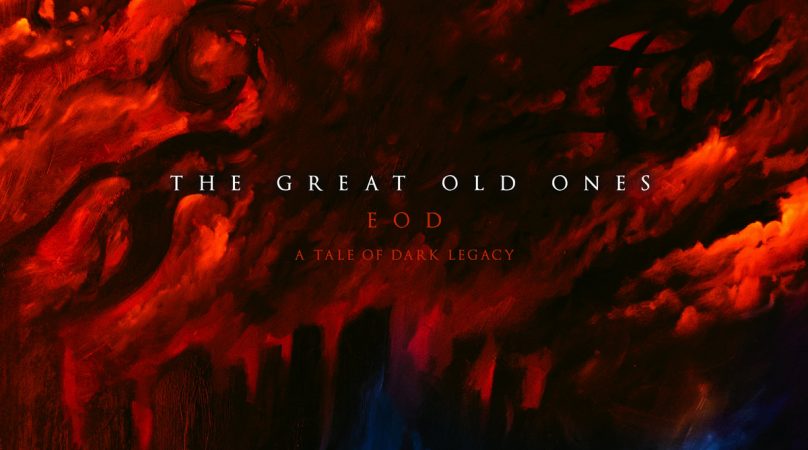 Disclaimer: you’re not ready for this. I wasn’t. It was no mean feat to write this review, because it took me a long time to digest EOD : A Tale of Dark Legacy. And for good reason: this the greatest and most complete album Bordeaux-based black metal unit THE GREAT OLD ONES has released to date…

Straight in line with their previous efforts, EOD : A Tale of Dark Legacy is not to be taken lightly. This album is an evil entity that depicts H.P. Lovecraft’s work in its darkest and most harrowing dimension. Musically but also visually, as shown by guitarist/vocalist Jeff Grimmal’s artwork. The band dropped the frozen, glowing tones of Tekeli-Li to drag the listener to a gloomy city in the grip of fire and a malicious creature, reigning over an unrelenting electric-blue ocean. The sole splashy contrast between both artworks sums up this new album’s material.

After a short but creepy introduction filled with eerie sounds, we take a peremptory plunge into the chasm… And meet a scorching chaos topped with an almost disconcerting and merciless black metal maelstrom – we weren’t used to so much power! TGOO used to serve those lumbering rhythms, grim atmospheres and aerial melodies… Well, don’t expect such things to echo on “Shadow Over Innsmouth”, at least on the outside. Soon, everything will be cleared of the thick black fog, and we’ll be finally able to hear those catchy, bewitching melodies (like “Antartica” or “Al Azif” before them). The trip has just started, in spite of some neck-breaking parts reminiscent of Tsjuder or Limbonic Art’s symphonies. You heard me well: symphonies.

THE GREAT OLD ONES flirt with various black metal sub-genres from avant-garde, atmospheric to symphonic. On “The Ritual”, drums fly solo on a tribal beat before being joined by slow, heavy guitars and, last but not least: organs. The scene is set, now close your eyes and imagine yourself dressed like a priest, a Necronomicon in hand, ready for conjuration. Let’s also note that the “spoken” parts are not in French anymore like they were on Tekeli-Li, but in English. Is it for the sake of being more truthful to the author’s work? For the first time in TGOO’s history, I hear… a solo. Yes, a solo. Tinged with hard rock, burning, devilish, almost danceable licks, this one comes in at the end of “In Screams And Flames”, then leaves us by ourselves with Quentin Gendrot’s spine-chilling cello. It is now time for the last chapter: “Mare Infinitum” wraps up this piece magnificently, like an old dusty grimoire you will dig out of your shelves and listen again and again. Yet the best way to enjoy this album is definitely while lying on a bed in the dark, and letting your mind go adrift like on a damned craft, stranded somewhere between the Garonne and a starry sky.