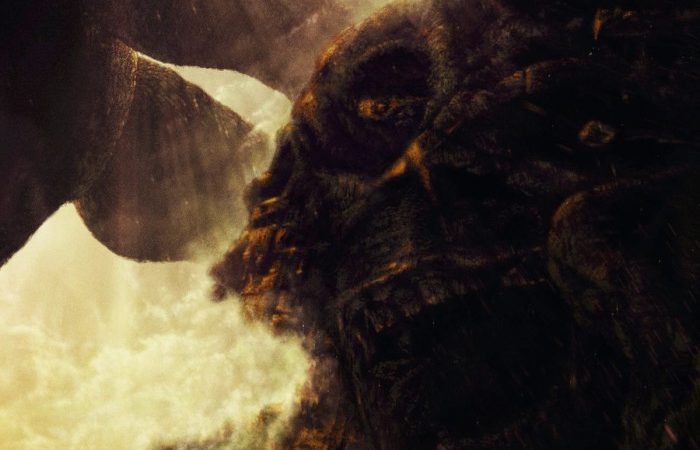 Hey! Guess what?! It’s Record Store Day! Well, it’s not, but at a previous point in time, it most certainly was. Friday November 25th 2016, to be more precise was last year’s sacred Day of the Crate and to celebrate, Shattered Platter threw one of California’s most treasured gangs of funksters FATSO JETSON together with hip-hop n’ happenin’ Dutch trio DEL-TOROS, so they could make seven inches of sweet waxy rackets to fit tight and snugly in your tote bag.

Side A sees a whole heap of Lallis doing, well, what the Lallis do best, all whilst straddling the as-ever percussive sticksy trixes of the legendary Tony Tornay behind the kit. ‘Dream Homes’ is a dark, hunched, lumbering lizard of a tune. Mario and Larry Lalli’s spindly solos trickle in and out of Dino Lalli and Tony’s patient and brooding grooves; bending in and out of the rhythm, morphing it once over, twice over and then bending it right back on itself. There’s nothing out-rightly aggressive about the way Fatso play on this near seven-minute instrumental, but there’s a hazy uncertainty about their play. It’s a somewhat unnerving sense of “where exactly am I?” as cacti fly by, coyotes teeth glisten in the dust-baked dust and the fireflies dance around those sickly sweet guitar melodies.

So, it sounds like a typical FATSO JETSON song? Yes it does, because that’s what it is and without Mario’s warped ramblings to add some light-headed meaning to the flow, it is, essentially, a jam. But hey, you’re either reading this because you like Fatso Jetson, or you’re curious enough to give this some intrigue and so you’ll be rewarded with their cautious, yet as ever brilliantly improvised ingenuity.

Alkmaar-based triad DEL-TOROS might be the lesser known entity of the two names adorning this split release, but that doesn’t mean that their eight years not-out in the game have resulted in anything less than a whole heap of righteous grooves. There’s a surfy, yet jagged approach to their contribution ‘Die Cast’ here that’s almost Tornadoes-doing-a-Melvins in its meandering, bouncy sets of jangling, staccato riffage. Sure, there’s thunder and fuzzy guitars laid over heavy drums and warbling desert basslines, but there’s also a deep-rooted bloodline of jazz coursing through these Dutchmen’s veins. If you’re into the tightly-skilled, yet rhythmically-challenging output of Stinking Lizaveta, then you might just have stumbled across your new favourite band; a suitable and worthy Bonnie to Fatso Jetson’s finely-polished Clyde.

No doubt you were most likely either stoned, drunk, at work or just too damn crate-crazy on RSD 2016 for this short but sweet release out on Shattered Platter to truly register, I know I was. But one of the simple pleasures for me in reviewing is the oft unearthing of these simple gems that take you off into the unknown. If jerky, fuzzy, jazz-infused cacti-rock is your bag then I guess as one of the samples on del-Toros’ ‘Die Cast’ cackles: “Well… It looks like you’re as lucky as they say!” So stick it in your tote with the rest of them, your gramophone is calling.