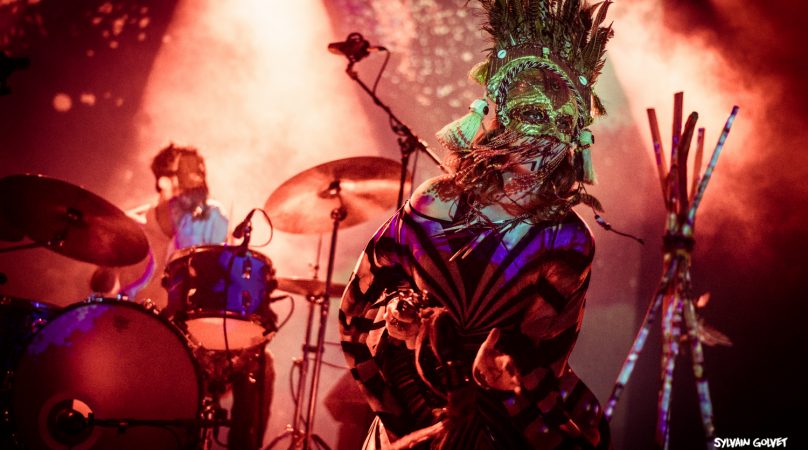 Who cares about an aching back, near-perpetual tinnitus and a resigning liver when they can still rock out for then more great hours? It’s the last day already, and this awesome edition of DESERTFEST BELGIUM is not quite done kicking our asses. In the words of a rather fuddled (and thus highly spiritual) festival-goer I’ve had the honor to meet: on a scale of 1 to 10, Antwerp 2016 was reeeeally good. (PHOTOS: Sylvain Golvet)

Soon as I read the words « oriental doom » in the program’s blurb for MOANING CITIES, I am compelled to go take a look-see. In my mind, these two words work like clickbait: they leave me no choice! The Brussels native don’t seem intimidated by their Desert Stage exposure. With ideal sonic conditions, the band displays its wide musical range – an ample, highly immersive heavy psych (hence the « doom ») adorned with sitar and other not-so-Belgian instruments (hence the « oriental »). What a great discovery!

Now for a more straightforward and less subtle kind of performance… Eindhoven’s stoner metallers – not the backhoes manufacturer – KOMATSU are making all walls and eardrums tremble on the Vulture Stage. I had mixed feelings after their opening slot for John Garcia in Paris two years ago, but I have to admit the trio isn’t stingy with badass licks (and poses), and does wonders as a day starter! 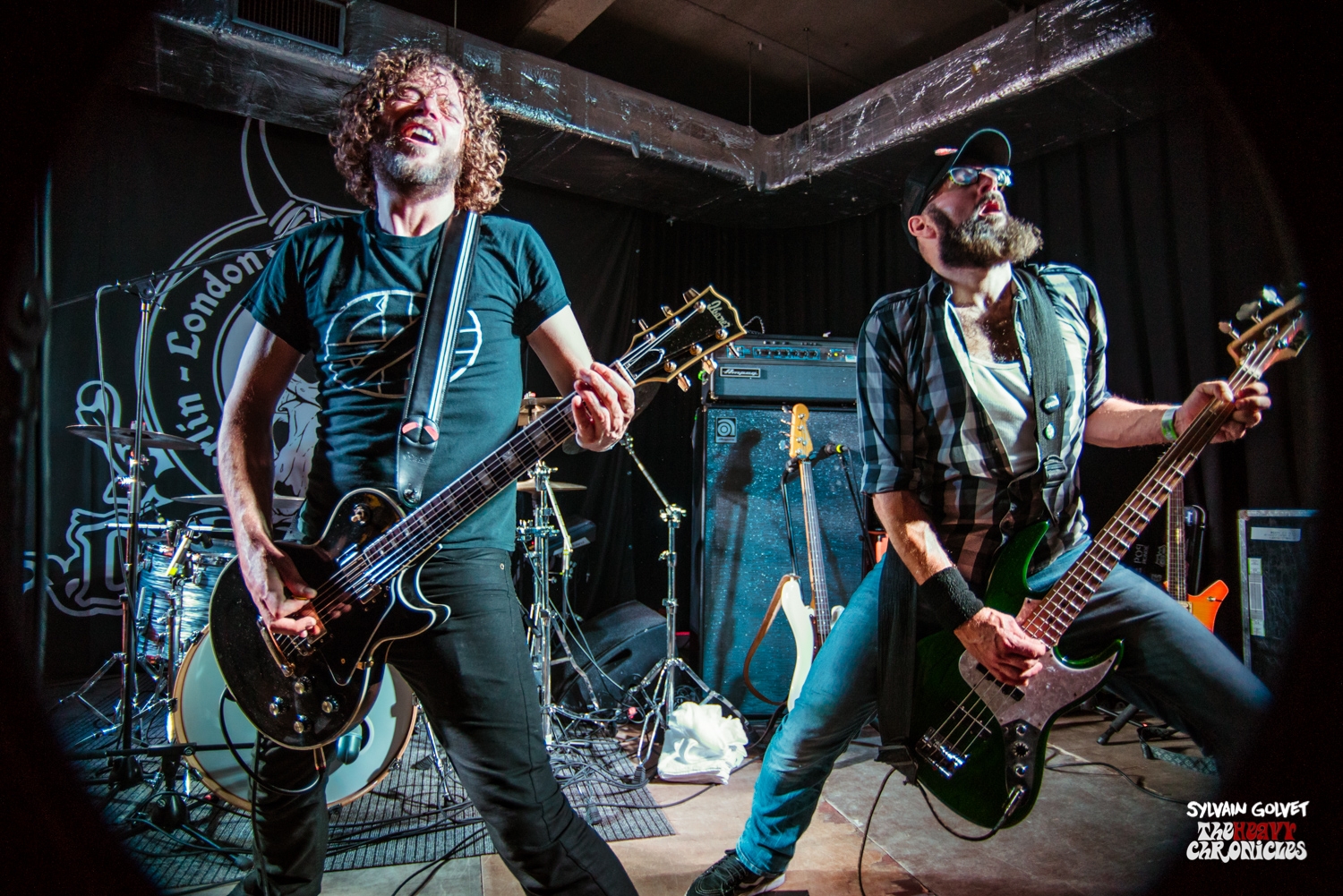 Heavier than ever, it’s now the turn of EARTH SHIP to spread their filthy, greasy riffs across the Canyon. For those who’ve missed the boat, the Berlin foursome – previously on Pelagic Records and now 100% Napalm-certified – are the fierce makers of a pretty melodic sludge metal formula (did someone say “Crowbar”?). Stating that their sound is “crushing as fuck” is no commonplace, as such loudness would definitely annihilate many of their peers. Too bad that we can barely hear Jan Oberg’s half-growled half-clear vocals when standing front row – an inconvenience that is quickly fixed once taking a few steps back.

Speaking of heavyweights, the one and only MY SLEEPING KARMA are now on. Having already reviewed one of their splendid gigs in Paris, I could have let my « journalistic » curiosity take me off the beaten track. But hey, I am first and foremost a spectator and if there’s one thing I never turn down, it’s a performance by the German hypnotizers (that, and free beer). My Sleeping Karma is one of these bands that are blessed with a unique musical signature – at the risk, some might say, of overexploiting it. At any rate, their irresistible hindu-ish groove is garnering support from an ever-increasing number of followers and, as long as they enjoy playing with each other as much as people enjoy watching them, I don’t see how it could stop. 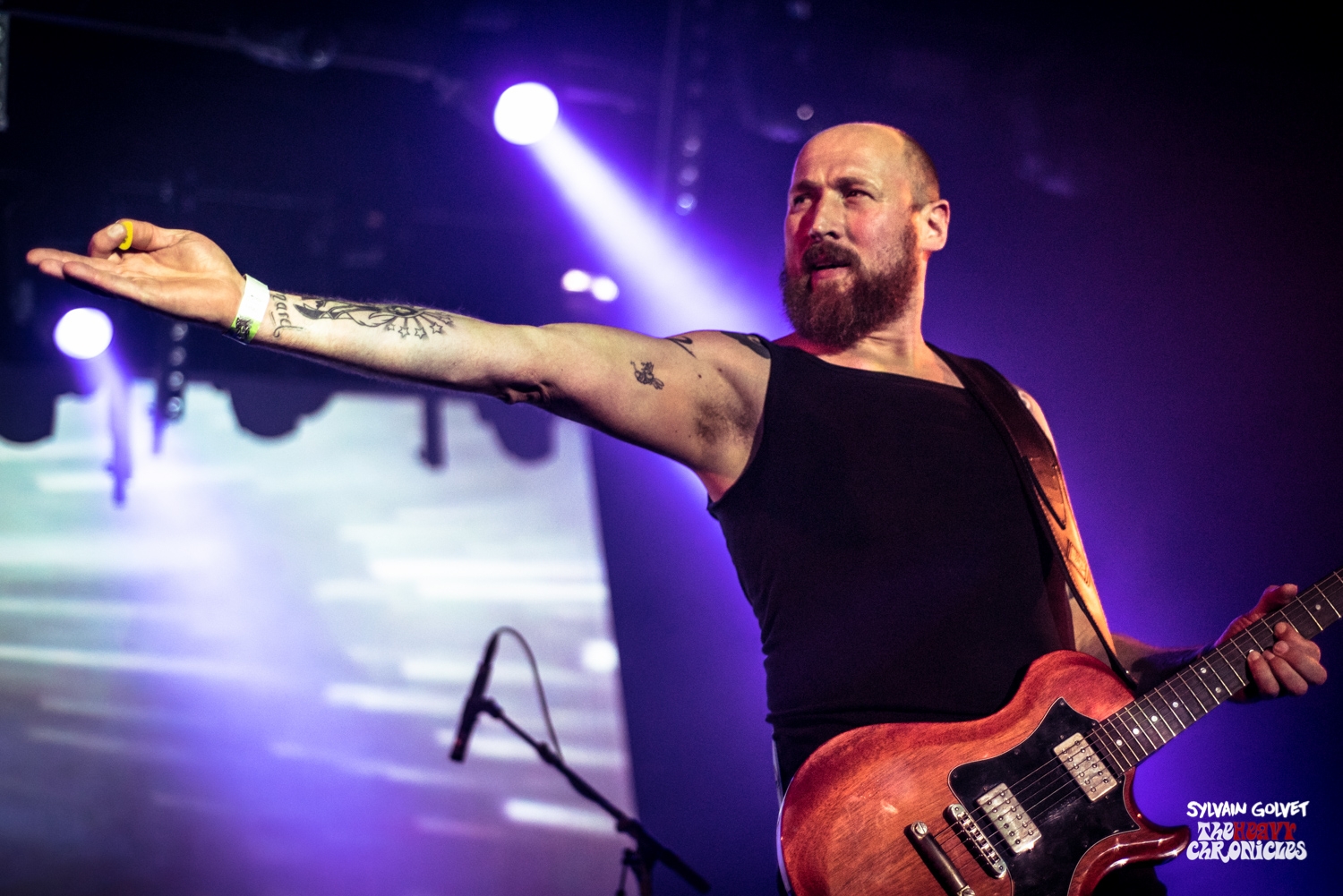 I am now filled with love and harmony, which should put me in the right mood for TAU‘s shamanic shenanigans. This peculiar project derives from a transcendental experience lived by Shaun Nunutzi (Dead Skeletons) in the Northwestern Mexican desert – and facilitated, one would assume, by massive absorption of, er, cotton candy. The album drawn from these opioid hallucinations is worth a listen, but here on stage, the minimalist setup fails to flesh out the project’s Native American inspirations: Nunutzi merely surrounded himself with a Venezuelan multi-instrumentalist. Attending this concert is, for me, the equivalent of watching someone’s vacation photo slides: it’s obvious that the guy had a nice trip and I’m happy for him, but… am I bothered?

Since I always pencil a heavy blues rock time slot on my agenda, there’s a window of opportunity to go check on our old pals LONELY KAMEL. Twenty minutes, that’s barely enough to see what the brand new lead guitarist Vegard – aged less than a quarter century – has up his sleeve. Well, lots of aces, apparently! Though he may lack the flamboyant, give’em-hell attitude of his predecessor Lukas, young Vegard delivers melodic and masterful solos. Feels a bit like having B.B. King or Eric Clapton in the room with us. Lonely Kamel is dead, long live Lonely Kamel!

Safe in the knowledge that the Kamel’s future is assured, I’m off to score a decent spot for UNCLE ACID & THE DEADBEATS. Last year, its leader Kevin R. Starrs told THC in this interview how excited he was about their upcoming US tour, and the feeling of having to prove themselves all over again. Well, it seems that the burden of proof is now completely off their shoulders! Long gone are the days when the new British heroes of psychotic doom, freshly excavated from the depths of the underground, stared at their shoes on stages that felt too big for them. Uncle Acid has now put together a massive and utterly professional live show, while keeping a bit of that club mystery. Their secret? Small vintage amps cranked up to 11, leaving the sonic heavy lifting to the venue’s own speakers system, and a rather unrevealing light show. Real (and dark) magic happens in this well-crafted setting; subtleties and harmonies emerge from a thick cloud of fuzz. A velvet hand in an iron glove! 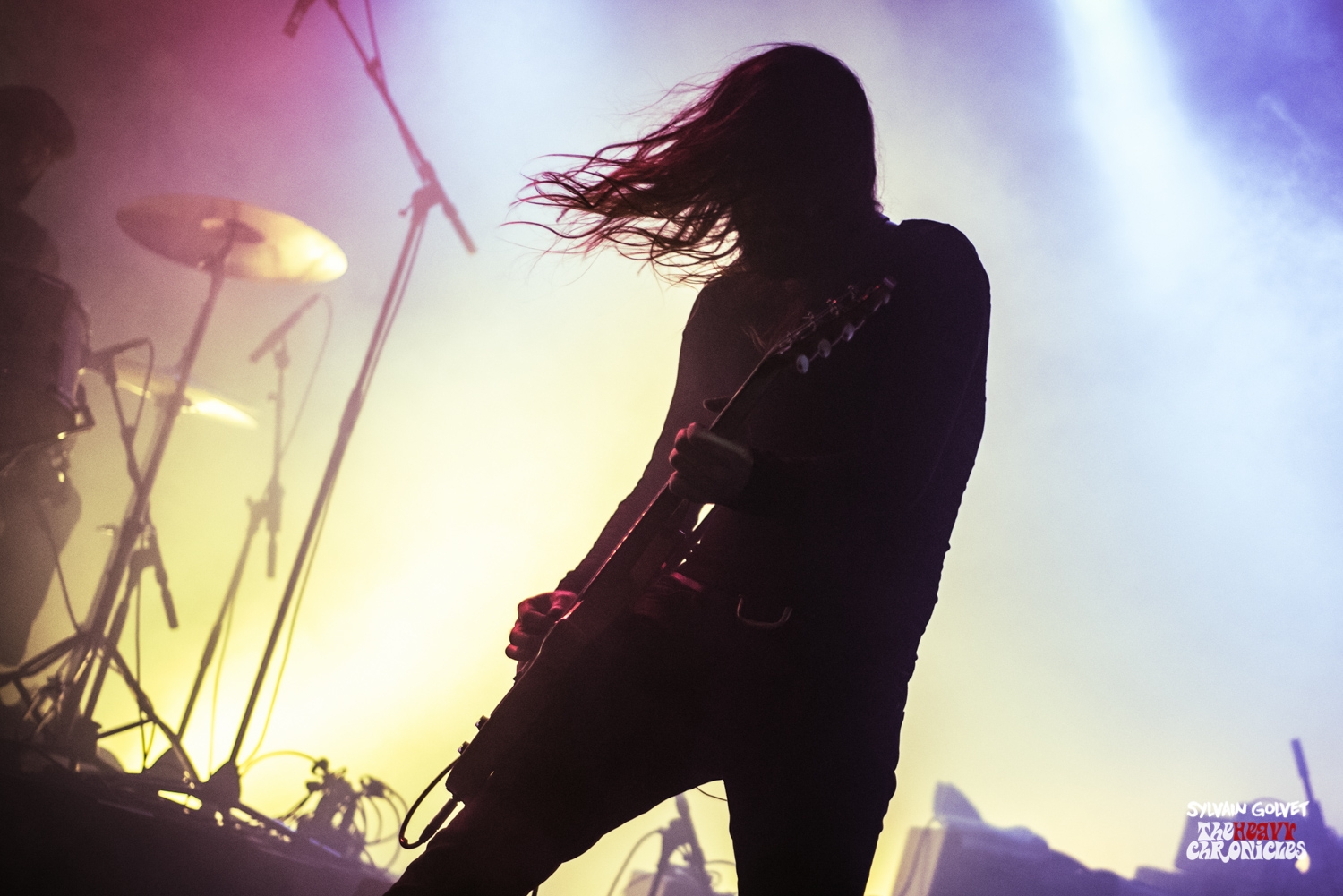 After such a masterful slap in the face, I find it difficult to stir up more excitement for GOAT’s psychedelic afrobeat. Not that I haven’t tried: gathering whatever strength I have left, I lift my feet off the beer-sticky floor and shake my tired rump to the sound of tom-toms. Alas I feel no bit of trance, not a whiff of spiritual revelation, not even mere entertainment. Maybe the Tinariwen, Songhoy Blues and Bombino enthusiast in me would rather go for the real deal. Or perhaps my reservoir of musical emotions has, over the course of a rich and dense Desertfest, nothing but dried up. After all, a good gig is only the result of a favorable planetary alignment: the performance, the venue and the viewer’s state of mind. Bottom-line is, the THC team ends up doing a whole lotta shakin’ on TOXIC SHOCK’s raw, unassuming, in-your-face sound. What can we say? Sometimes, you’ve got an itch that only Belgian thrash metal hardcore can scratch… 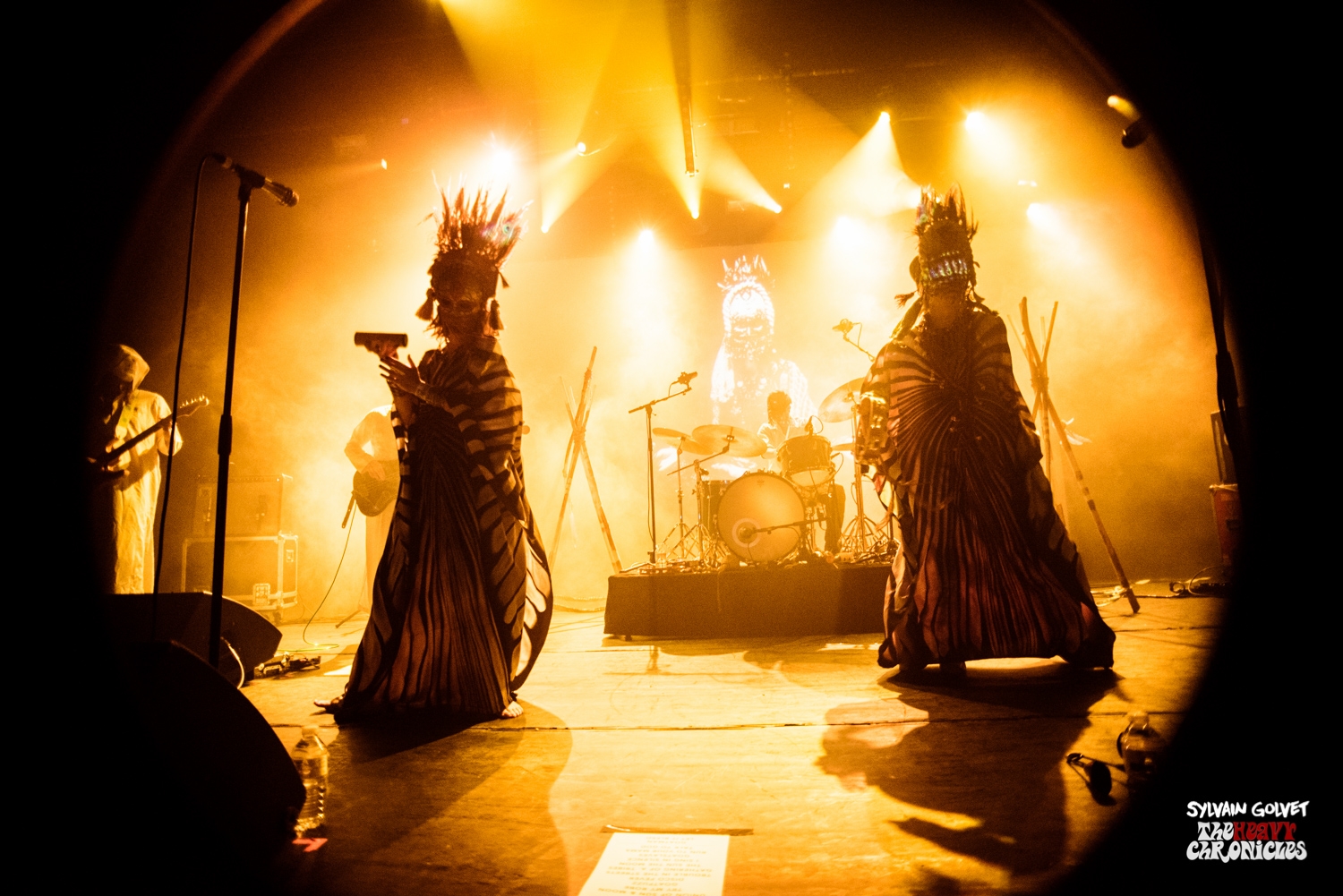 The fun goes on until late at night for the most relentless of us, with the festival’s ultimate afterparty. Funny thing is, among its quite heteroclite crowd, our British fellows once again win the award for Best Party Starters. When you acknowledge that most of the latter have witnessed the Desertfest genesis in London – where chanting Sabbath is just as natural as breathing – it makes total sense. After swaying our hips wildly on Grandfunk Railroad or headbanging on Metallica’s “Whiplash”, The Doors’ eleven-minute climax “When The Music’s Over” plunge all those still standing in a sheer state of plenitude, like on cloud nine. One thing is certain now: this DESERTFEST BELGIUM was well and truly that close to perfection.