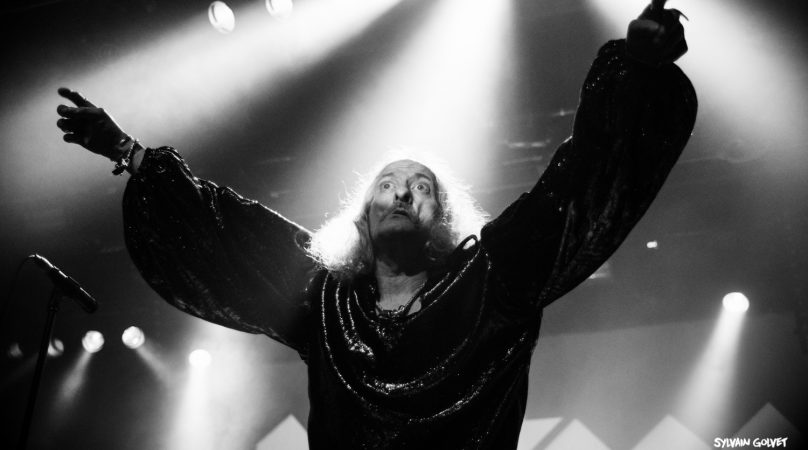 If you consider Friday as DESERTFEST BELGIUM‘s (fulfilling) appetizer, Saturday sure looks like the main course. Is Antwerp ready for a riff cascade, avalanche of distorsion, load of heaviness, hell, to see the Knights of the Sonic Apocalypse? Let’s hope so, because I’m fresh out of synonyms. (PHOTOS: Sylvain Golvet)

The days starts nice and smooth with PURSON, a British band built around the voice of Rosalie Cunningham. Their relatively classic “big psych fuzz wowowpopsong” (as they call it) provide a pleasant background for her vocal work. I’m rapidly drawn in by her intensity and presence. In the retro-rock-with-female-singer category, it’s a solid alternative to Blues Pills – who, on their end, seem very intent on breaking free from the stoner rock scene. I’m not sure whether I’ll be listening to their stuff all day long, but it was definitely nice to seem them in Purson (sorry, had to). 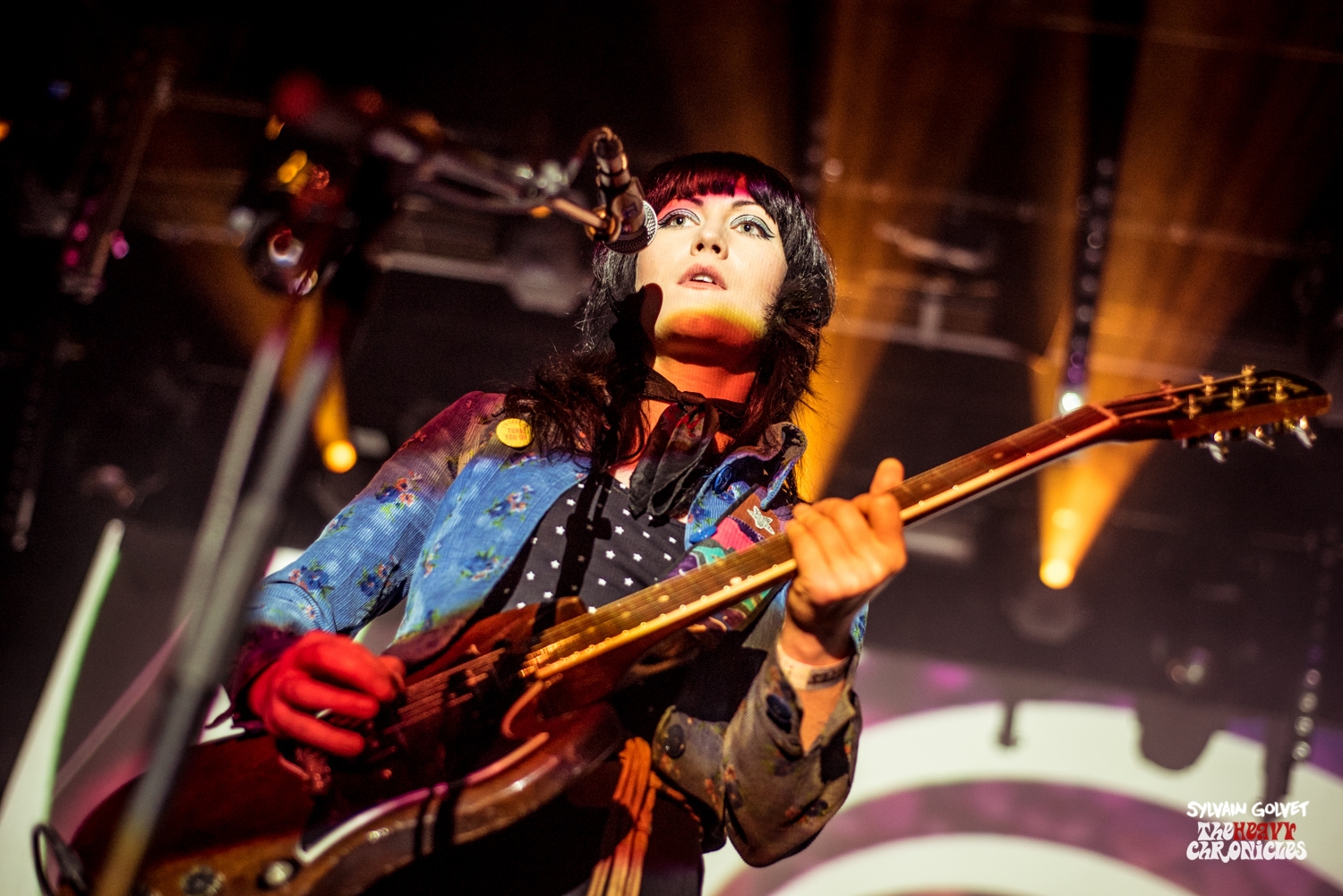 Next, I’m calling shotgun next to 1000MODS as they take us all on a Super van vacation. Live, the band radiates a powerful punk energy that takes their top-notch riffage to the next level. With three full albums in store – including the rightfully acclaimed Repeated Exposure To… that we discussed with their drummer Labros –, we’re really close to a perfect, all-killers-no-fillers setlist, from the most progressive (“Loose”) to the most explosive (“El Rollito”, a reliable pit-shaker). There’s even a line forming at the door: this short, mean and angry set omits a few heavy-hitters like “Vidage” or “Low”.

The downside of this is I’m super late for ELDER, which I didn’t think would ever happen. Our Greek friends at 1000mods have convincing arguments! There, stuck at the far end of a packed Desert Stage, I’m having trouble fully enjoying the (ever solid) performance. Plus, it’s the third time this year that I’m seeing the Massachusetts heavy prog power trio, and I do believe that there can be too much of a good thing. Their « brand new song » already ain’t that brand new to me, and I’m eagerly waiting for the next album at this point. Which, judging from the snippets showcased here and there (e.g. that little bonus ending to “Compendium”), should be heavy as all hell. 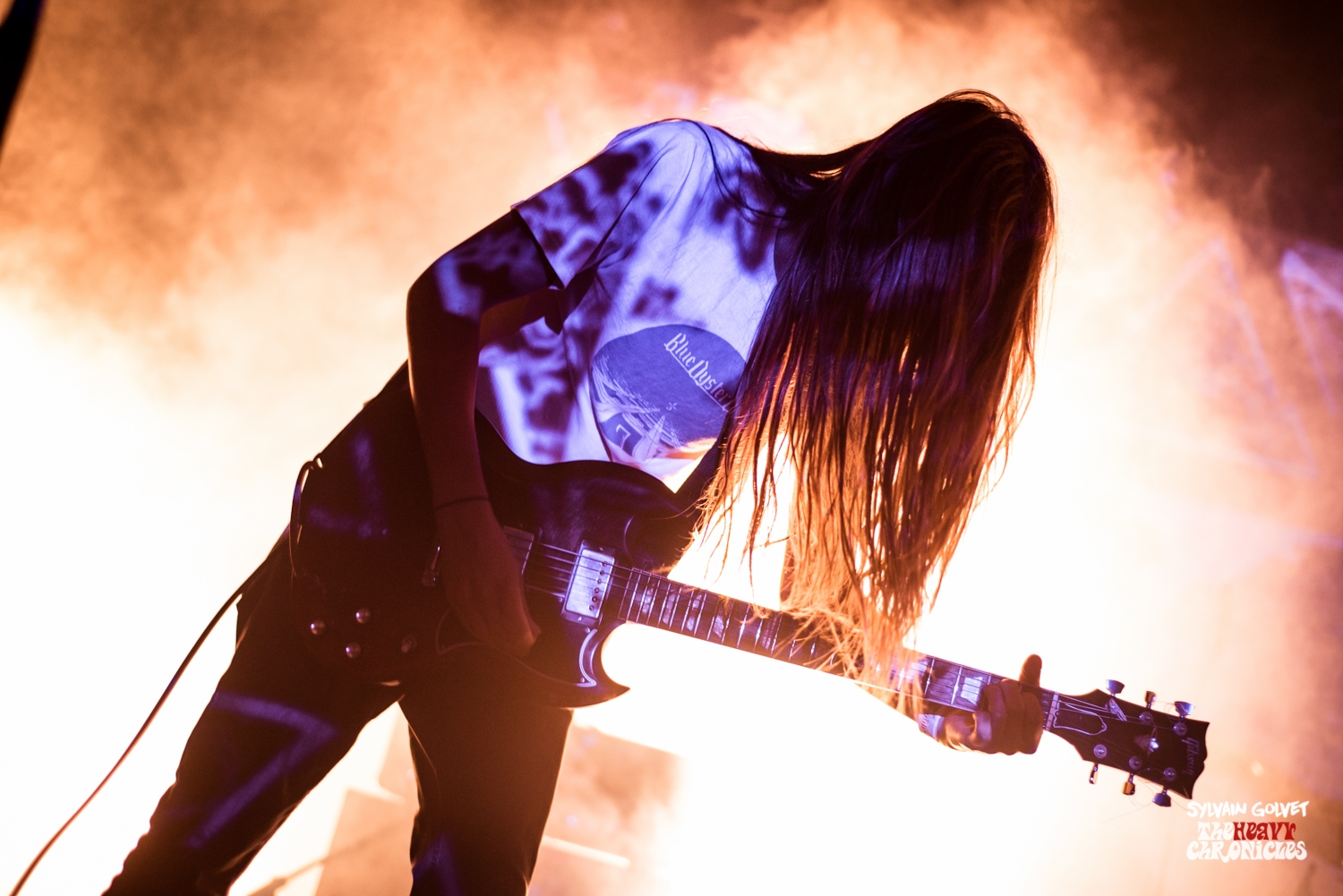 I set up camp before the Desert Stage and wait for COLOUR HAZE, called in at the last minute to plug the gaping hole left by Graveyard’s split. I can’t reasonably rejoice from this surprising turn of events, but right now, the German trio’s sensitive and über-melodic music is tickling my soul in the exact right places. Alas, the hour flies by, with a superbly executed “She Said” occupying a good third. The lights are back on already and, despite the audience’s plea, they will stay on. Colour Haze’s slow combusting heavy psych takes a good 2 hours, or even 3 (as in their 2012 « XXL Tour ») to deliver its full potential.

We make a quick stop by a packed Vulture Stage downstairs to catch the end of HANGMAN’S CHAIR‘s show. After they electrified, or should I say mesmerized, the whole Valley Stage at this year’s Hellfest, le French doom foursome stick to their heavy guns and keep captivating more and more aficionados with their melodic, heartrending doom. Even on Belgian territory, I see many people in the audience fiercely singing along some of the verses or choruses… Formed more than ten years from now, the Parisian outfit would have definitely deserved a slot on the Canyon Stage. Future will definitely tell. Maybe we’ll see the boys again at Desertfest London 2017?

By contrast, stoner supergroup THE ATOMIC BITCHWAX is a rapid combustion engine: barely have I set foot in the Canyon stage room that I’m already pulled in by Chris Kosnik’s piercing vocals. Answering the call of this rock’n’roll siren, I elbow my way through to take a closer look. From then on, I have neither the possibility nor the will to write a single world on my lil’ notepad. But I distinctly remember Kosnik declaring « this song is about getting high as fuck » before launching one of his many punk/pop/prog missiles. Well, which one isn’t? 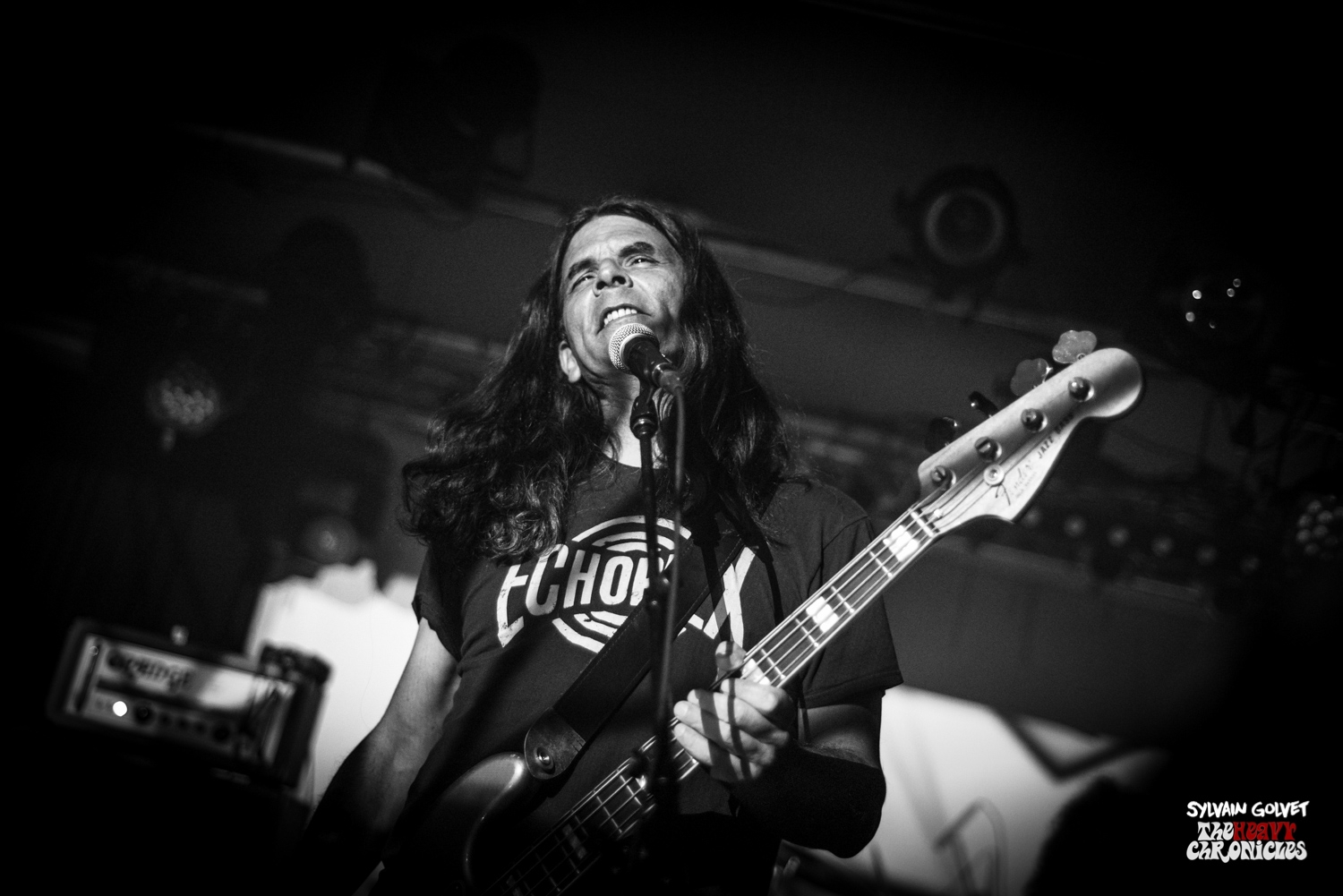 Speaking of being high as kites, 100% organic trio WEEDEATER is taking over the main stage as we speak. Which is a real delight for those who’ve rarely seen the North Carolina veterans on stage, comes as no big surprise for those already familiar with the band’s nutty performances. For an hour, the metal circus operates as expected: between two sips of Jim Beam, Dixie delivers thick bass licks while making his eyeballs roll even stronger, king of entertainers T-Boogie keeps his crowd glued with his sticks tricks and martial drumming skills, while Dave Shepherd stays in the background as usual, which doesn’t prevent him from blasting the greasiest and most THC-infused riffs heard this weekend…

At last, it’s time for legends with PENTAGRAM, or at least its latest incarnation around the eternal, the irremovable, the puncture-proof Bobby Liebling. Huge sound, fantastic crowd reaction, the performance lives up to our expectations. Sure, I would have liked more of Bobby’s inspired singing and less of his air guitar during Victor Griffin’s lengthy solos. But I guess I can’t complain: this peculiar balance is faithfull to Pentagram’s hard rock roots. At any rate, no one will accuse Liebling of being nostalgic: 2015’s Curious Volume is featured generously among the setlist, and the classic “Be Forewarned” has been rearranged with taste. If there is one thing from the Seventies that Liebling did keep intact, save from his emaciated allure and flashy shirts, it’s the madness, the disdain for any kind of limits. Today, in this particular scene, who else cares for throwing cabs across the stage or destroying instruments? 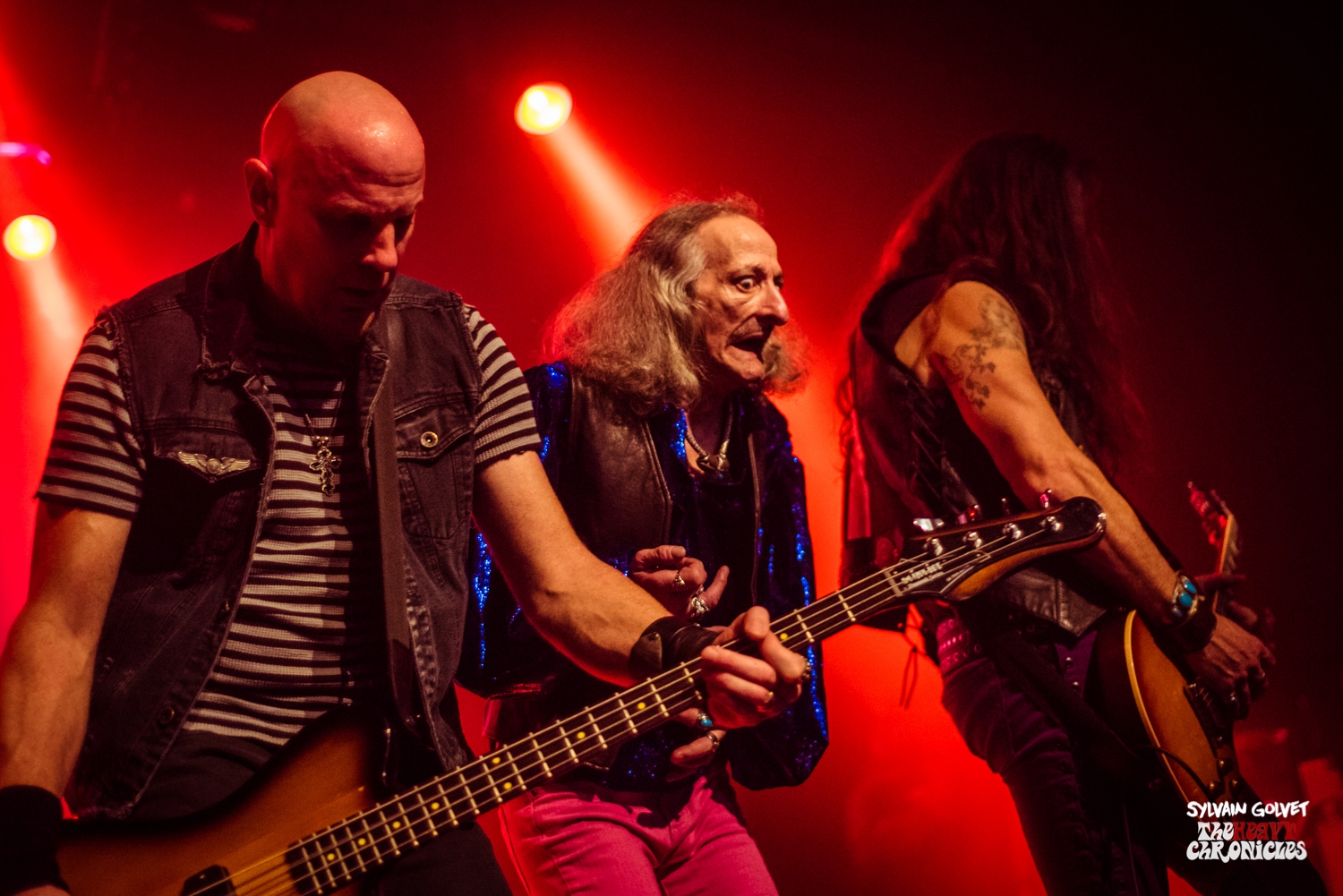