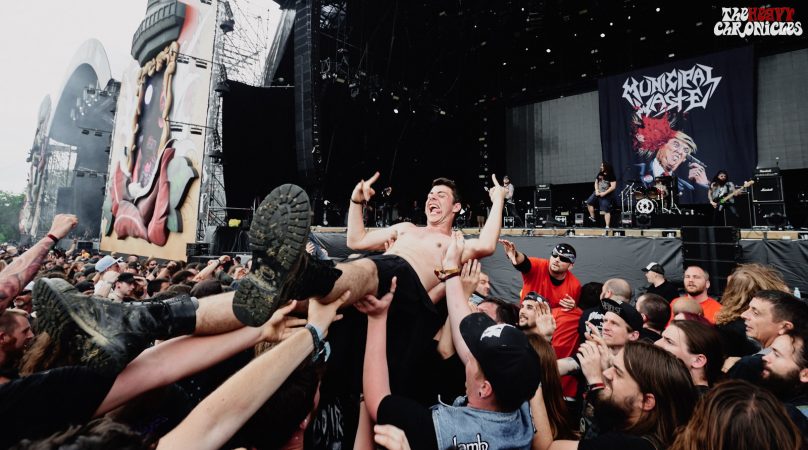 A sunny Sunday at Hellfest. We’re all just as chilled as delighted when getting ready for last 50+ bands of this crazy weekend i n Clisson, France. With Sabbath’s final performance (will Ozzy be up to the job?), a few rarities (King Dude, MGLA) and safe bets (Municipal Waste, Rival Sons), the THC crew has been hanging around the six stages to provide a you the most varied – and subjective, you know us – review of this 11th festival. (TEXT: Beeho & Razort // PHOTOS: Sylvain GOLVET & Gaël MATHIEU)

“Waking up at 10h30 for the first Valley show? Madness!” Well, not when it comes to our Breton pals STONEBIRDS, who are playing their biggest stage since they formed in 2008. The trio seems well prepared for this great new step, as they put on a 30-minute show that is just as flawless as it’s stirring. Their atmospheric post-sludge is remarkably faithful to the records, and vocals are just as gritty as they are in tune. I’ve been following the band for quite some time now, so seeing them mesmerizing the whole Valley audience fills my heart with good vibes for the rest of the day. And the great Stonebirds story has only started, believe me… 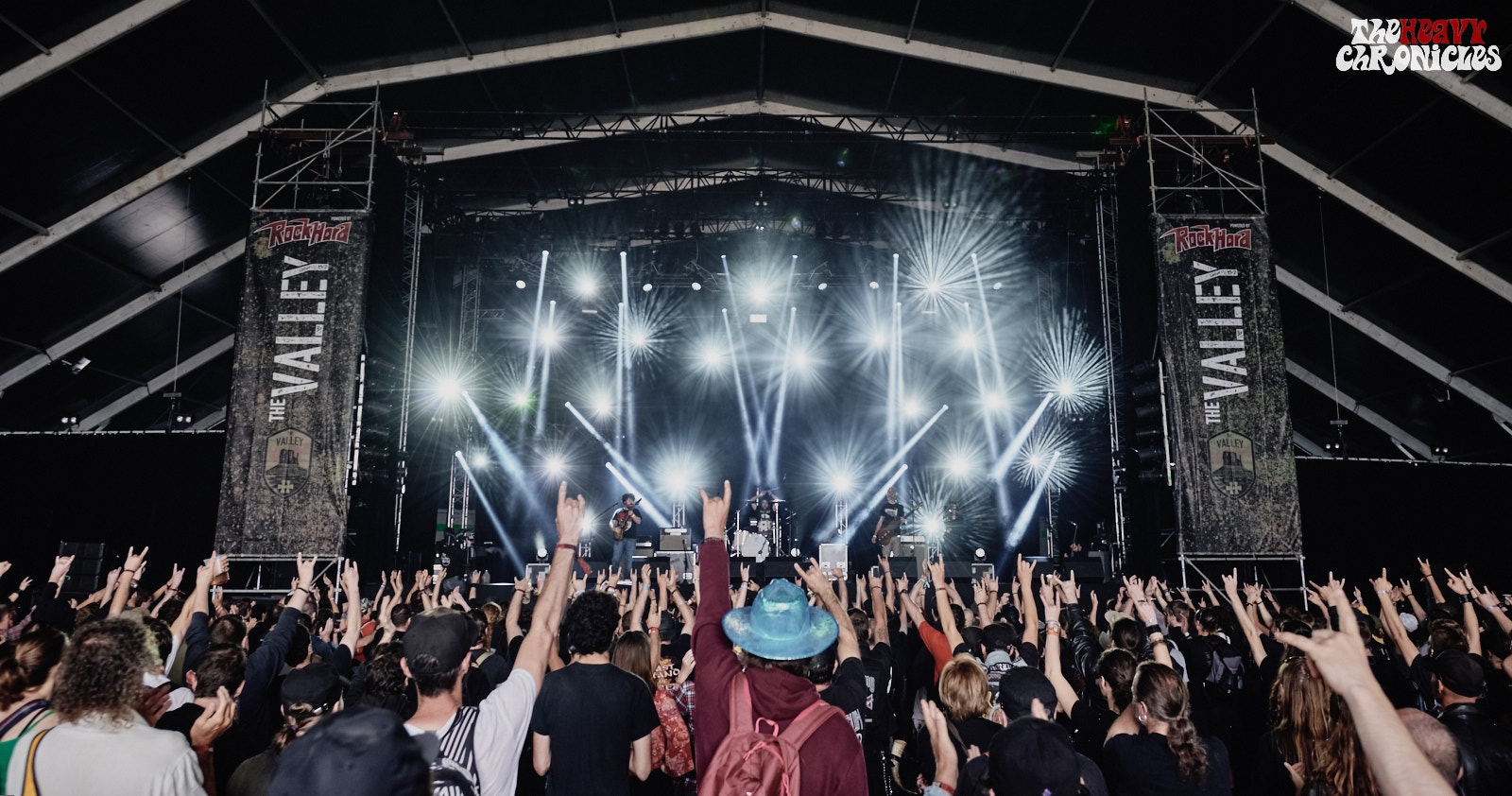 Up next, these rad motherfuckers in MUNICIPAL WASTE guarantee to lift our spirits. Tony Foresta’s side project Iron Reagan was one of my top highlights of last year’s edition, but this right here is the higher level. Seventeen fucking songs within thirty minutes, a perfect “I want to kill the president” + “I want to kill Donald Trump” combo (how topical), jokes, a bit of politics, but also and above all: the longest circle pit of the weekend on the Mainstage. Yup. Let’s not talk about the final part of the show, when the band is about to kick off “Born To Party” and screams “Municipal Waste is gonna fuck you up!“, but the stage manager immediatly cuts short for timing purposes. The crowd starts booing, the band leaves the stage regretfully, yet we carry on with our day all smiles, ready for war. – Beeho 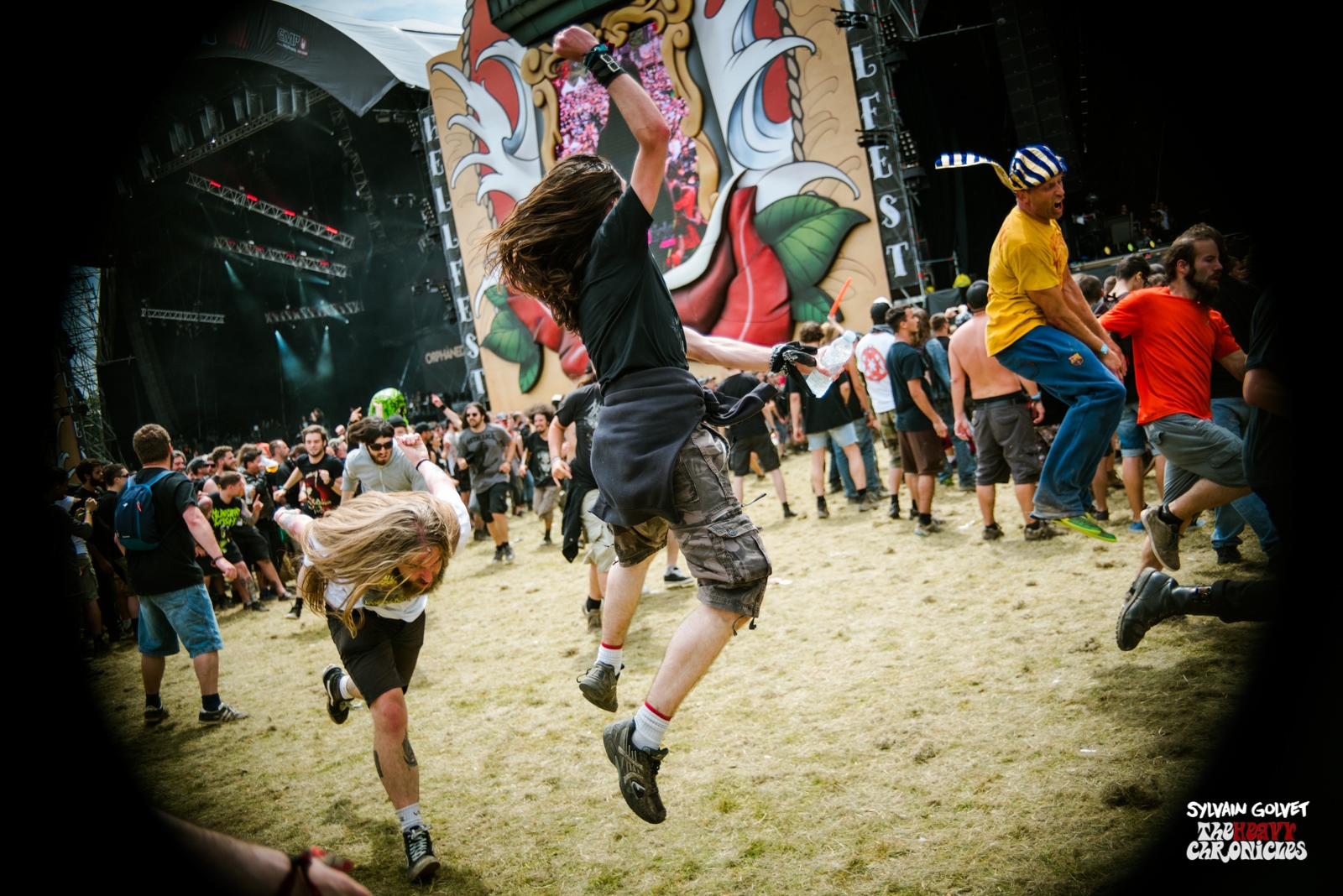 It’s from Valley’s ground that I watch Amsterdam rockers DEATH ALLEY. I won’t probably remember their bearded faces, but at least I can see their dark logo in the back ground and, of course, hear a Rickenbacker’s thick bass lines. After a quick nap, I’m in the best mood for what is about to take place. A strikingly crystal-clear sound, a dark vibe and a hypnotic voice… The folk prince of darkness KING DUDE has arrived to take us in his peculiar world thanks to his rather simple yet very catchy songs. I haven’t been much into him, but after such mind travelling session, I can only dig deeper. A great discovery! – Razort 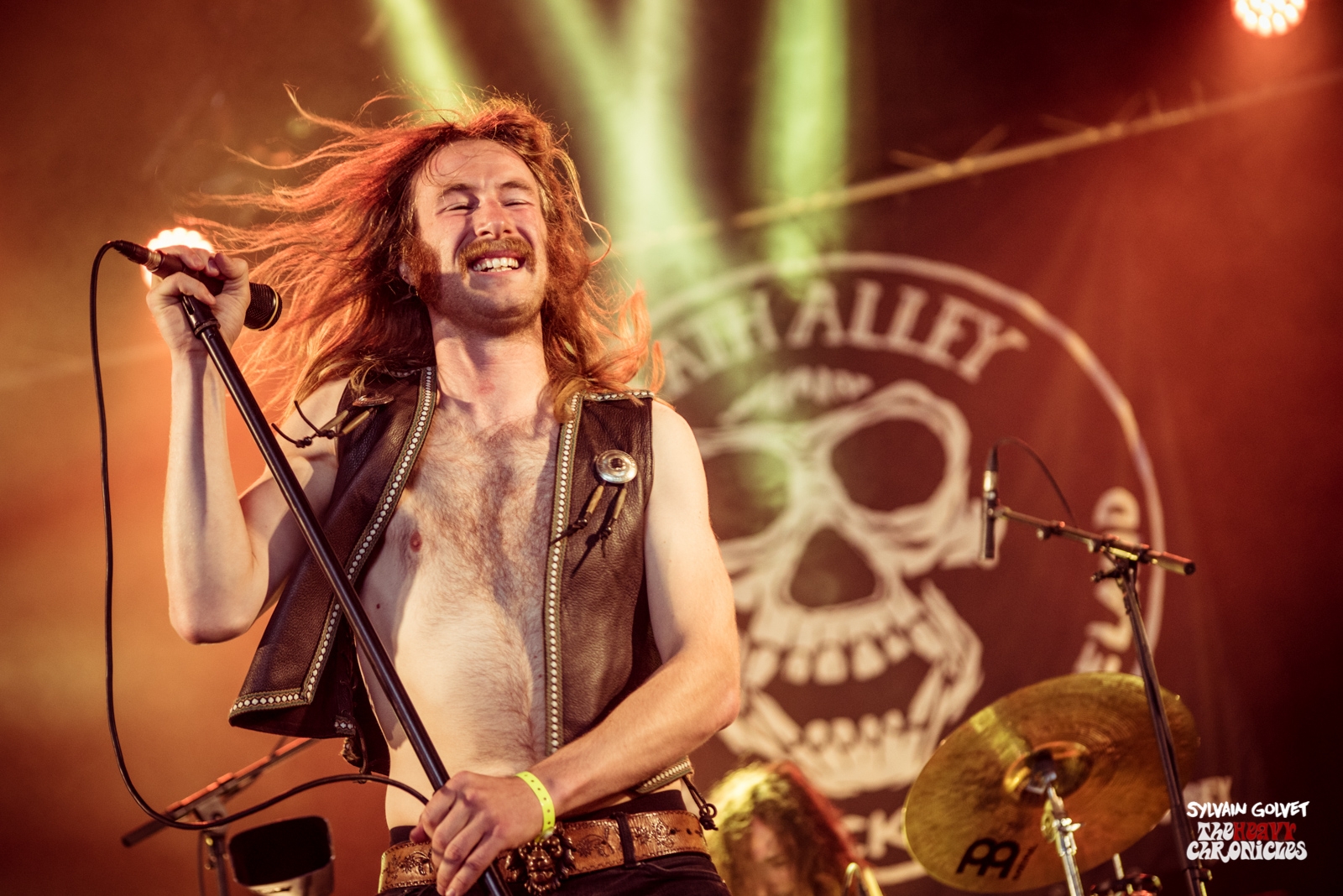 One of the band I was looking forward to the most today was UNSANE. 3.50pm: the post-hardcore trio gets on stage surrounded by the most minimalistic gear setting I’ve seen on here, and start “Rat” in front of a sparce audience. Would they have been a better fit in front of the Warzone crowd? Either way, Tarja on the Mainstage certainly isn’t what we can call competition. You can feel that Chris Spencer impresses, with his razor-sharp attitude and death stare… Then his slide guitar and the band’s southern-sounding steamrollers get the upper hand, and the grease-addicted audience of the Valley finally shows its enthusiasm. The Valley won’t tame the Ney-Yorkers’ raw heavy/noise metal, IT IS taming us instead. Getting out of here and being instantly caught in a vice, by the thousands of folks who are waiting for GOJIRA to kick off on the Mainstage, it is possible and damn, it is unpleasant. I was complaining of the crowd during Rammstein on Friday, but this is way worse today. You can’t even circulate smootly from the Hellfest tree, wow. 160,000 is bit too much, isn’t it…  – Beeho 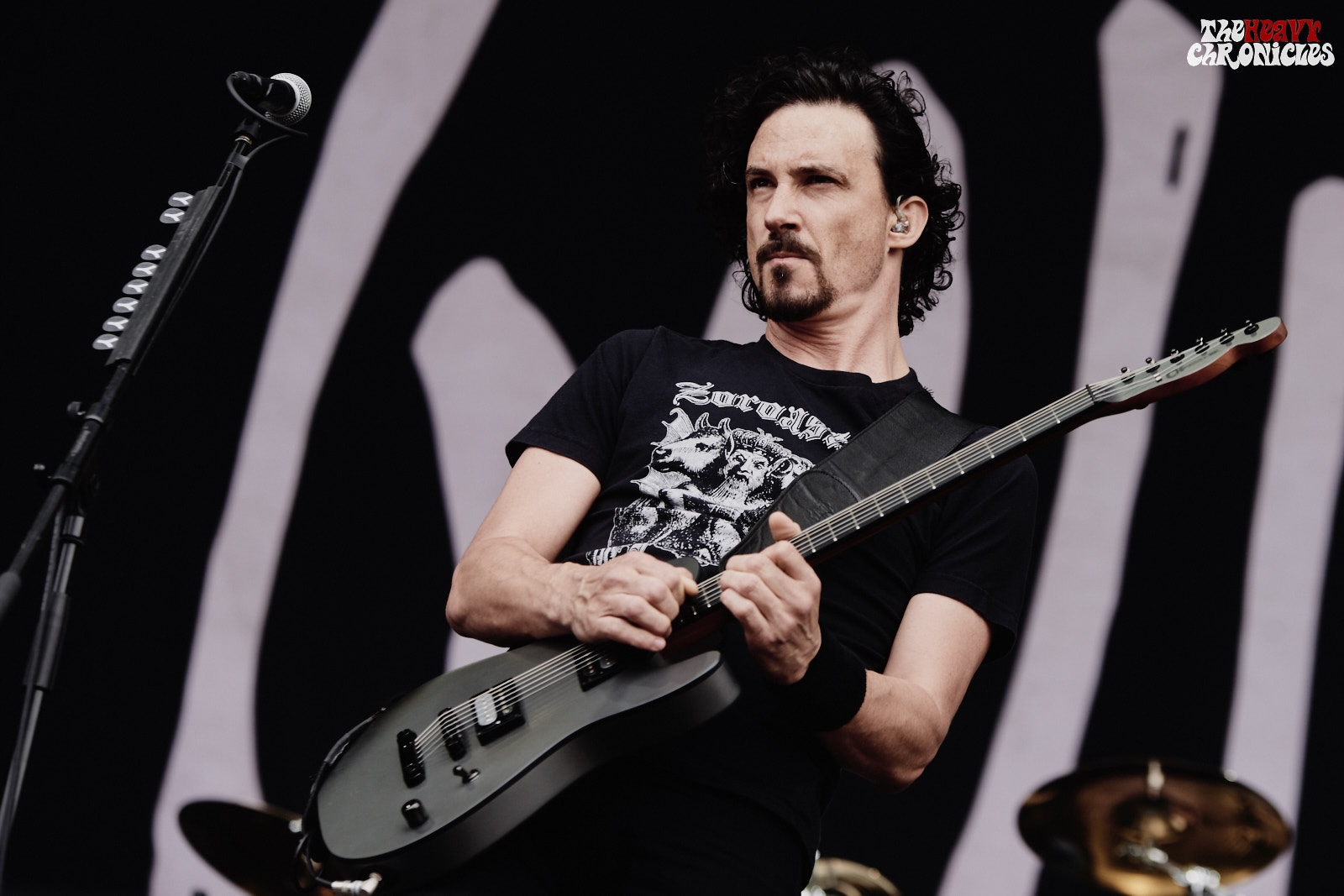 My fix of violence is provided by Poland’s one and only black metallers MGLA (pronounced “M-gwah”). I’m apprehending a little bit when walking through a motionless crowd: how good will the sound be? Is this crowd made of fans or dummies? Beside a HxC aficionado who intents to start a mosh during the first song, we are indeed between fans and the guy soon meets with a field of cold lava. MGLA’s black metal monolith crushes us for fifty minutes with only three songs off With Hearts Toward None and Exercices In Futility, yet the latter drip with warmth and hypnotic melodies. The overall immobility of the crowd and musicians – hidden under their hoods and black leather Perfectos – makes the moment absolutely out of time. Ravishing. The shift of atmosphere that follows is quite extreme. I was in caught in an obsidian block and now enters a stretch of molten rock, KADAVAR‘s to be exact. The band starts on “Lord of the Sky” then a couple of tracks off the last album (which I binged on last summer), so it HAS to feel good. We slowly get into their warm grooves, the trio is as always on great shape and manages to make us nod and jump up and down despite the exhaustion, sore body, hangover (or the three combined)… “Mile Away from Home” feels pretty special to me, like a madeleine de Proust (a memory catalyst) that only reminds me of good moments. I close my eyes during “Living in Your Head” and sort of glimpse a kaleidoscope through my eyelids, like Doritos taking off above the Valley crowd. All the classics are used up, drummer Tiger is pummeling his transparent drumkit like never, bassman Dragon squeezes is chords with a typical phlegm, and Lupus shakes his mane and beard while delivering some of his terrific solos. A heart-warming trip that once again went way too quickly. – Razort 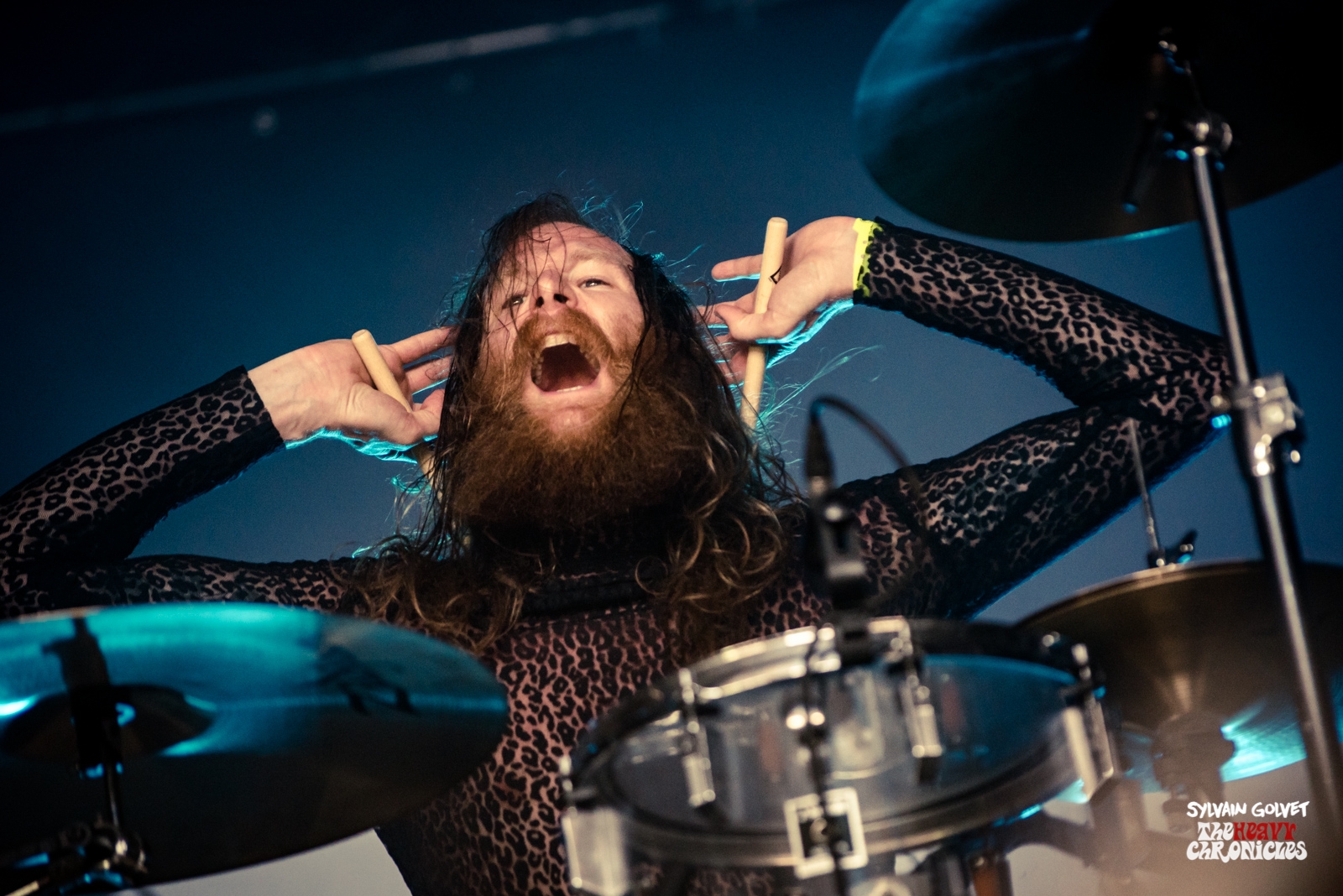 THE unmissable rock gig of this third day is none other than RIVAL SONS. They got me under their spell with their brilliant new album “Hollow Bones”, so seeing them on the Valley stage today is something that I expected, for this stage’s truly passionate audience will be perfect for them. I was right: everyone’s over-excited when the Californian enter the stage and pour their groovy and blues-infused licks with application – or as some would say, “total class”. Real rock’n’roll like only America can provide, the one that makes young women all excited and young men stick their chest out. Jay Buchanan’s vocal performance is so impressive that I almost forget about the band behind him. A great singalong session by the end of the show makes us unstoppable, until the band kicks off the last song without transition  (damn, those tight schedules). Invigorating, exhilarating, PERFECT. – Beeho 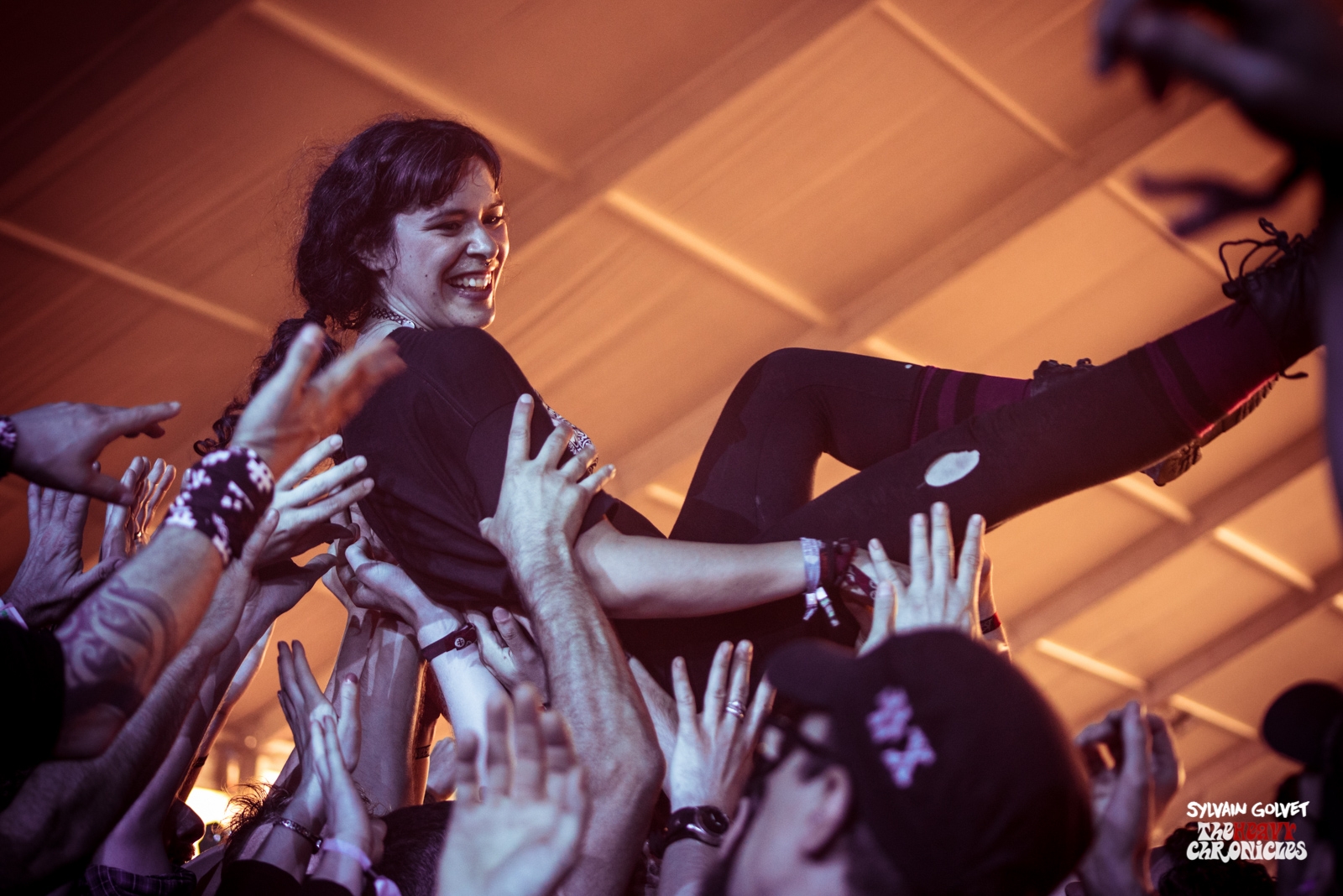 New atmosphere shit: after the Temple’s frost, the Valley’s molten lava, I’m now getting ready for a bloodbath/sandstorm with SLAYER… When approaching the Mainstage, a rather compact and sleepy crowd blocks the access to the pit… “War Ensemble” kicks off while I’m trying to get closer, shouting in vain those lyrics in which my teenage years were steeped… But the closer I get, the more horrified I am: the audience is lethargic, the band is hanging back, on auto-pilot, rarely interacting with their audience. A handful of fans manage to warm up the pit, and when I hit the fifth row I can FINALLY live the Slayer experience and releases a long scream of anger. “Dead Skin Mask”, “South of Heaven”, “Raining Blood”, “Angel of Death”… The finale got me dead once again, even though it was definitely their best performance today. 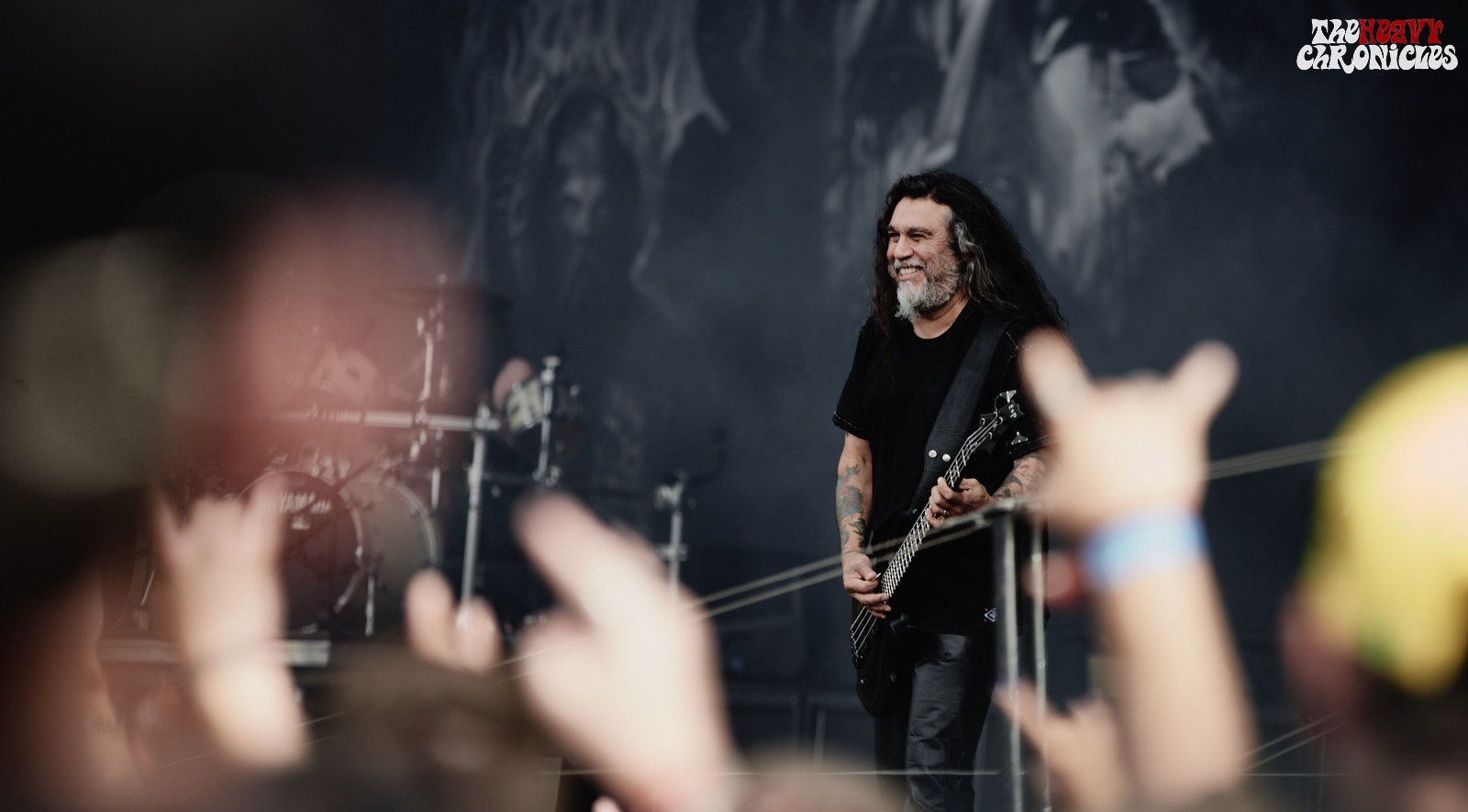 Despite the irreproachable sound and Jonas’spellbinding voice, seeing KATATONIA would have had a much better taste if I wasn’t already in a state of total exhaustion, and if the band had skipped the new songs to only play tracks off The Great Cold Distance and Night Is the New Day, which according to me are their masterpieces… Another great madeleine de Proust that brought me back to high school and made me travel while I was lazily laying on the Altar’s parched grass… I spend the next couple of hours wandering on the site, then come across Mars Red Sky’s bassist, who is waiting for a strange show at the Valley: JANE’S ADDICTION (please enjoy all the nice pics at the end of the review, because as far as I’m concerned, I just couldn’t put up with the vocals). I’m worn out now, I don’t even know where I’m going… until I remember a special destination.

Choirs, organs, fireworks on top of a crazy light show… GHOST under the twilight literally blow my mind. When I think that they were supposed to play on the Valley Stage back in 2013, and ended on the Mainstage. The price of success. I still can’t find out whether I like their music or not, some songs really catch my attention, but the rest feels way too cheesy for me… except for the very last song “Monstrance Clock”, which reawakens me in the best way ever! 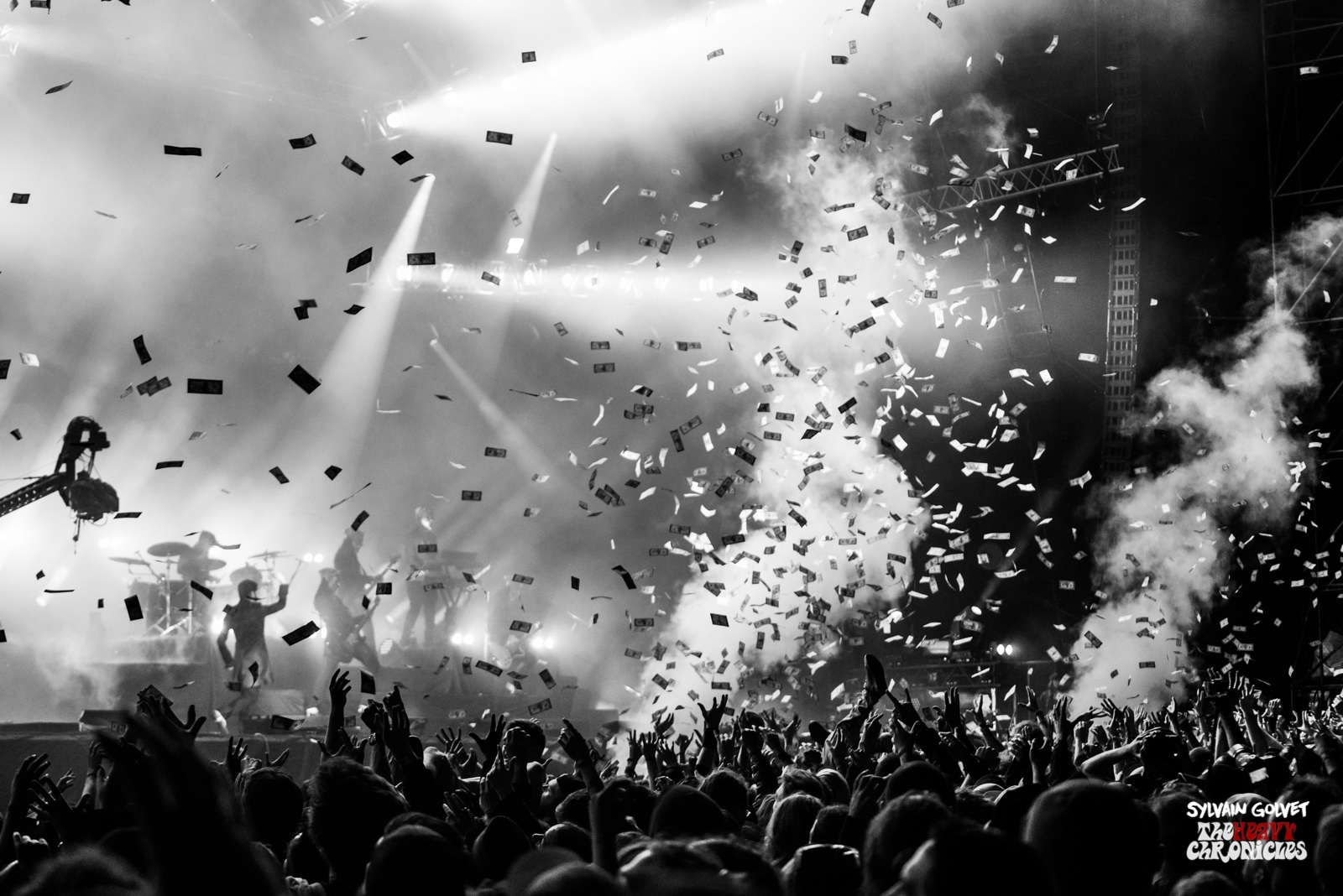 My biggest concern today is about BLACK SABBATH. Will they be up to the job? Has Ozzy Osbourne found back his energy and voice compared with his 2014 perf? The band make their way in with kitsch screenings on, the first chords portend the worst… even so! The classics sound just as they should, and Ozzy’s vocal performance ends up not being that bad after all, all that making me get closer to get drowned in their decibels, keeping in mind that they won’t be around for long. “Fairies Wear Boots”, “Into the Void”, “War Pigs”… The further we go into the set, the more the people (finally) let themselves go, singing along… Even if the drummer’s loooongish drum solo on “Rat Salad” tends to kill the vibe a bit, at least they end on a high note with the crowd’s fave “Paranoid”.

Sunday night at Hellfest is usually that time when we all feel a bit confused, seeking the friends you’ve lost along the way, being a bit drunk or in my case, nearly passing out of exhaustion… I’m on my own, sat in front of the Temple stage, struggling not to fall asleep when DEICIDE kick off, who are about to deliver what is going to be the most brutal performance of the festival. Glen Benton and his crew arrive on stage and immediately launches the riffs of “Homage for Satan” with a devilish energy, a sound too heavy and filthy for this stage, and an obvious lack of elegance and poetry. I still make a nosedive and get barely awaken by songs like “In the Mind of Evil”. This is the moment I choose to surrender, leave the site on their barbaric tunes. – Razort

READ ABOUT THE FRIDAY AND SATURDAY