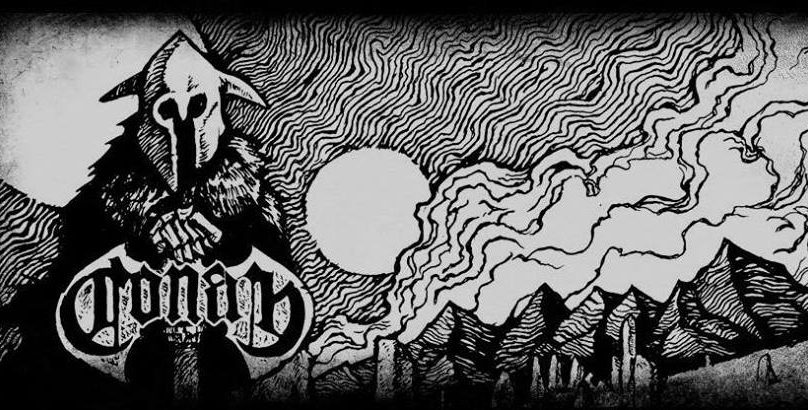 Conan: an odyssey into feedback frequencies. Being able to see a band as powerful as CONAN in my home town Bordeaux, it sounded like a fantasy to me… And yet, the last-minute surprise of their venue at our fave DIY lair made waves, with only one week to prepare our brain cells before the storm…

As usual, the Void’s doors open late. No big deal: it gives us some extra time to grab a couple of Belgian beers at the store nearby. Tonight, Bordeaux-based extreme doom trio ENDLESS FLOODS is in charge of commencing hostilities, plugged into Conan’s gear. Huge stacks of Sunn, Ampeg and Marshall amps are towering over the small stage… topped off by a Rickenbacker bass and dirty distorted riffs: now for a crushing appetizer! Not much room is left for vocals – which are actually more like shrieks lost in an ocean of thickness – but slow and melodic parts are making a beautiful interlude to the much heavier doom/sludge parts produced by the Bordelais trio. The buzzing sounds has easily reached the back of the room, the air has gotten thick and stifling… We feel dazed when the set is over. The storm has temporarily ended, and we’re already getting ready for round two…

Are we inconscient, masochist or only impatient? Well, maybe it’s a little bit of all this that pushes us to the front row, in order to enjoy the first CONAN show ever in the packed and smoky basement. The lineup is slightly different from when I saw them at Hellfest in 2014, as Samothrace’s bassist is filling in for this short Euro tour. The gear remains intact though: I see the Green amps’ diodes shining dimly in the surrounding reddish light. A tousled and bearded Jon Davis gets on stage, without his usual cap and hoodie (given the heat, I think he had no choice). A drum kit with two bass drums? I’ve rarely seen that at Void. I’m utterly convinced that this is gonna hurt. Badly.

Without notice, the British trio launches “Throne Of Fire” off their new album Revengeance. The rest of the setlist is a perfect blend of songs from the two previous records, interspersed with new tracks. The guitar is so loud compared to the bass that is makes is hard to distinguish the whole thing at times, yet this sonic barbaric slab keeps forming, steeping slowly into our brain juice and giving birth to the smoke and sweat that are now taking over the room. It’s like you have to fight off to avoid being completely annihilated by their at times slow, at times stormy rumblings. All the smoke we’re bathing in is now stuck onto our skin. We could get baptized by a priest of the Holy Church of Doom. The crowd is going flat out, looks like people know their classics: “Gravity Chasm”, “Hawk As Weapon”, “Battle In the Swamp”, “Foehammer” (who drives everyone crazy) and a few other gems off Revengeance, such as the monolithic “Earthenguard” that drags us about 20,000 leagues under the riffs… Endless feedbacks serve as transition between each new “chapter” of this live performance, ruining each time more what’s left of our audition… until the last song. An oppressive silence and a shy thank you from Jon later, and “Total Conquest” kicks off to end this party on a high note. Conan just crushed our inner ears, drone-style. Once back to reality, we all feel dizzy, extracting ourselves from this warm fog… as if we were leaving a battlefield.