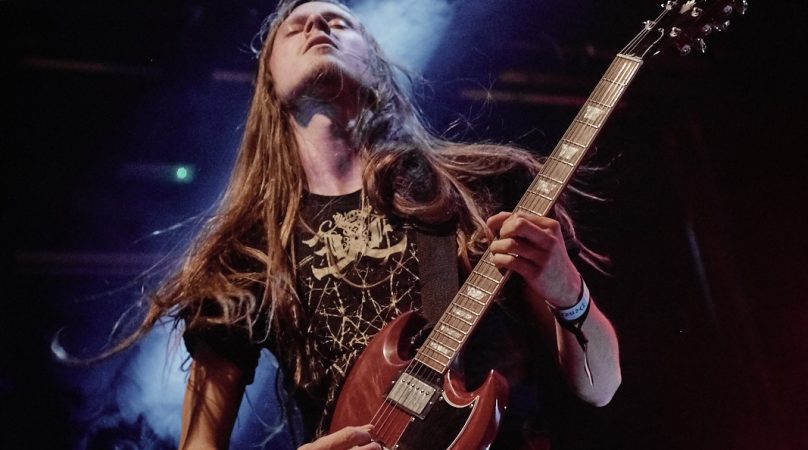 It’s our last day at DESERTFEST LONDON, and a little bit of nostalgia is already settling in. The festival may not be over yet, but when the end of such a brilliant festival comes knocking at the door, you welcome it with a heavy heart, while thinking about all the great things that are about to come. And goodness there was plenty, starting with the addition of the fabulous Koko to our pilgrimage spots, as well as the compelling riffs of Godflesh, Elder, Wo Fat, Mothership, Oranssi Pazuzu and more. (TEXT: Beeho & Mathieu Lubrun / PHOTO: Gaël Mathieu & Pierre Le Ruyet)

After we spent the night drinking and headbanging until we started becoming part of the Black Heart’s furniture, we’re happy to enjoy some extra sleep before kicking off our third and last day at Desertfest London. After a badass breakfast and a few schedule adjustments, the THC crew is ready to go, hitting the Underworld for a progressive doom storm named OHHMS. As I expected, the Brits deliver a radical (in both senses of the word) performance, with two songs in only thirty minutes that feel like a tsunami: growing from a distance, you’re watching it thinking you have time before running for your life, except that it suddenly blows up in your face and sweeps away everything around you. First try of the day = converted!

The sun is high in the sky, the beer is as chilled as can be, and Raybans are out. I come across Elder at the Black Heart when stocking up on fuel: the boys are serene and happy to be here (it could hardly have been otherwise), which is good news for everyone! On a friend’s advice, I follow my metal pilgrimage to the Electric Ballroom for a proper ear cleansing with BAST‘s hybrid doom/black metal, favored by the venue’s irreproachable sound. The trio raises such a thick wall of sound, that you instantly understand what Conan’s Jon Davies saw in them when he signed the band on Black Bow Records. I don’t stay for more than two songs as I must leave for Koko soon, but Bast defintiely made a great impression. Just check out their debut album “Spectres” and tell me that you don’t feel like rolling about in the mud like little piglets. – Beeho 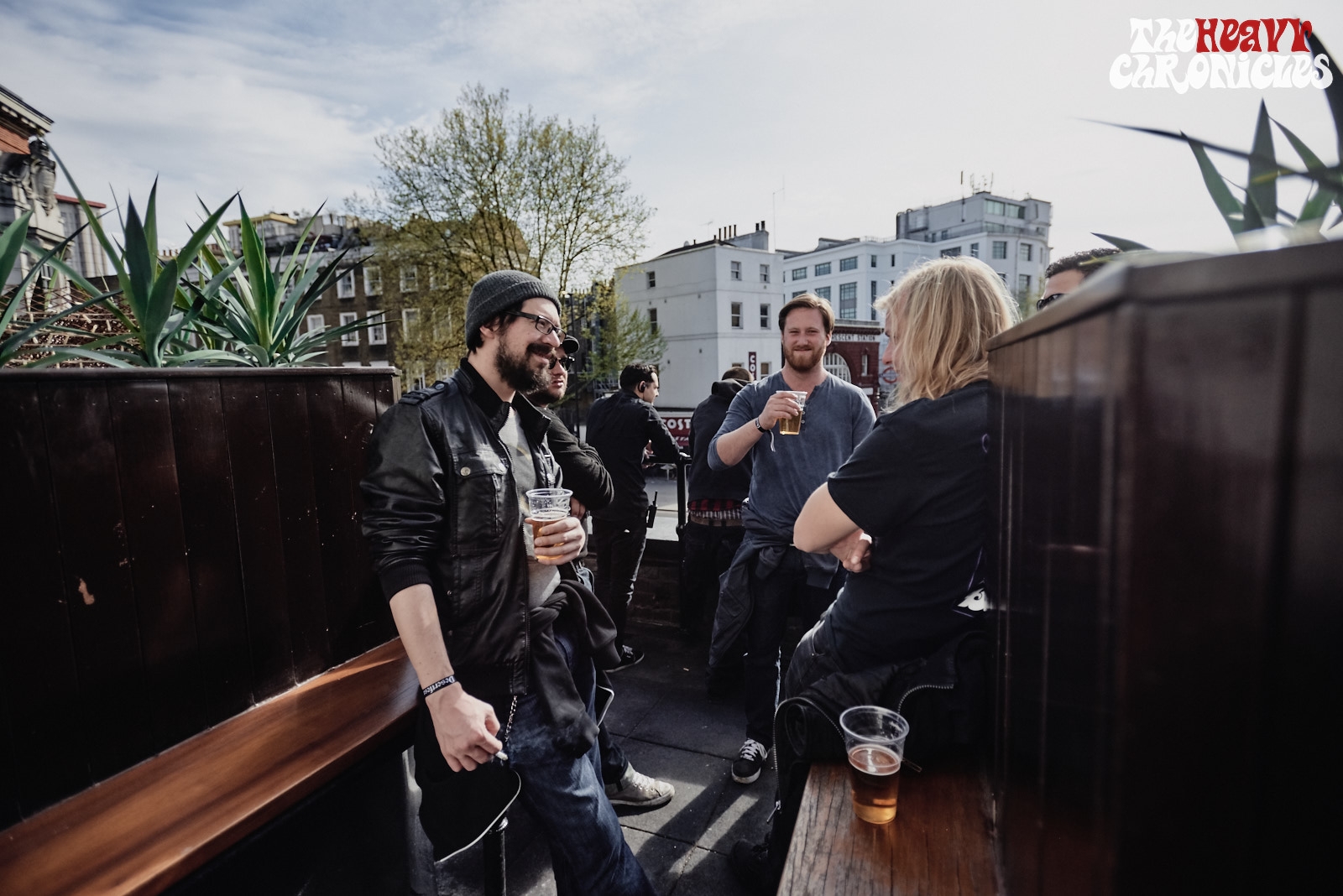 Sludge and doom fans may be familiar with MONOLORD, yet it is my first time seeing them today and I’m far from being disappointed. The Koko – which was added to welcome some of today’s main acts – benefits from a perfect sound for heavy bass-driven acts, that is definitely put to the test during the Swedish trio’s gig. The rhythm section attacks with brutality while the guitarist/vocalist buzzes riffs that Tommy Iommi would not disavow. I was expecting some heaviness for sure, but that show goes beyond my expectations. Throughout this 30-minute doom mass, the band debuts an unexpected new song led by an “Iron Man” inspired riff, after what they close their set with their classic “Empress Rising”. If some were doubting at the beginning of the show, the room was most likely filled with newly conquered fans by the end of it. Now if their frontman Thomas Jäger could release a death metal side project with the same buzzing guitar sound, my life would be complete. 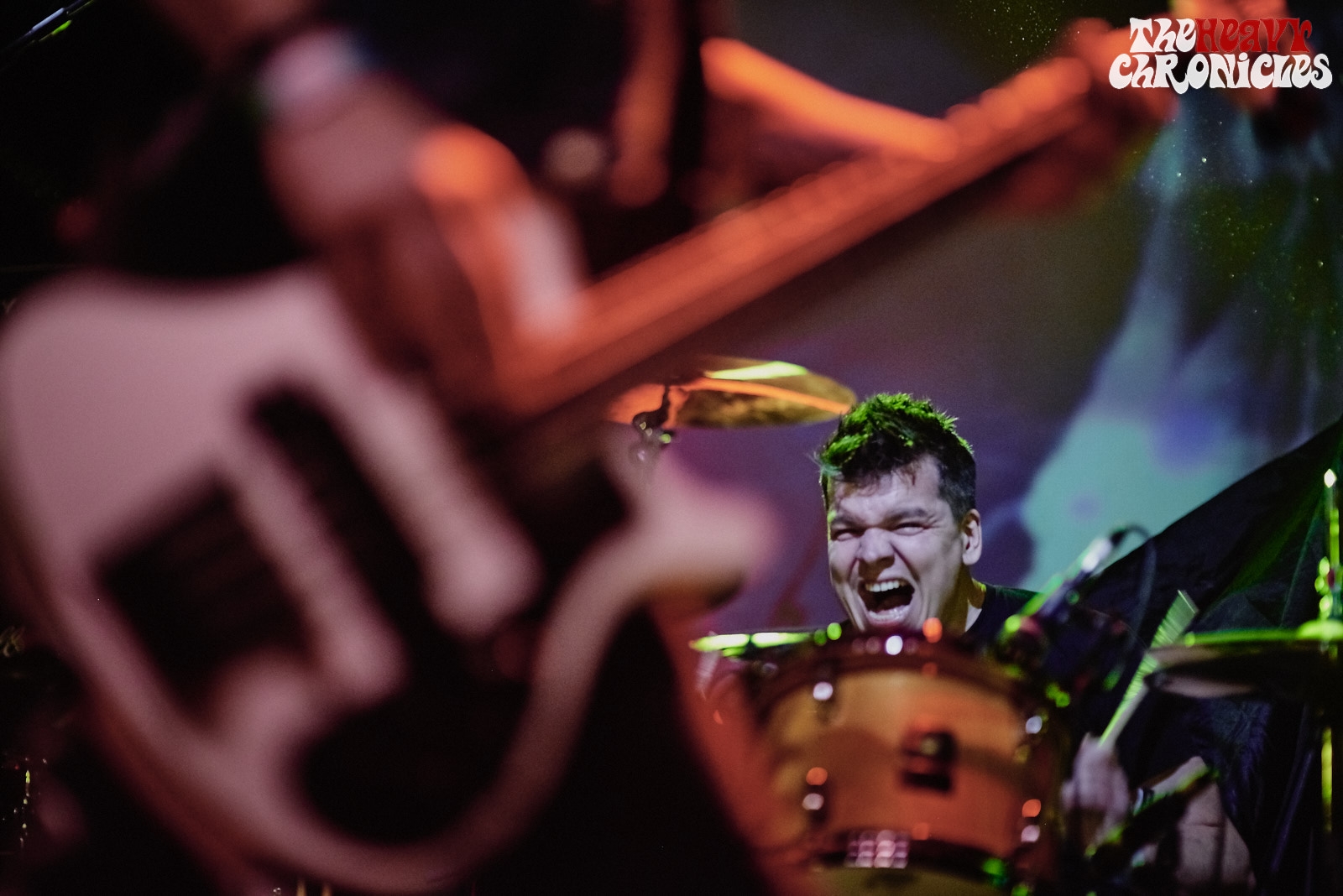 My attempt at catching Necro Deathmort at the Ballroom results in failure, as the distance between the two venues doesn’t allow this kind of switch. I quickly head back to Koko for the unanimously-awaited ELDER, in a room filled to the brim. The sound is once again clear like crystal and gives the band enough scope to make their breed of stoner and progressive rock rumble. I may haven’t been completely seduced by their records in the past, but the experience is much more involving once you get deeply immersed in the sound. – Mathieu

As for me, this journey into ELDER‘s world – magnified by Koko’s stunning setting – is one of the climaxes of this edition. With “Compendium” and “Lore”, the beginning of the set puts the emphasis on the last album, running its course with a new song that follows on from the band’s subtle proggy turn. When I decide to ascend from the ground bar to the balcony, the band starts playing their goosebump-100%-guaranteed classic “Dead Roots Stirring”… As I’m climbing the first, second, third floor to find the perfect viewpoint, their riffs are working their way to the stratosphere… until the apotheosis and, as far as I’m concerned, tears of joy. Seeing these three geniuses performing in this sublime venue, this is what I call a moment of grace, something that doesn’t occur every other day. This show wasn’t just close to perfection: it reached it.  – Beeho 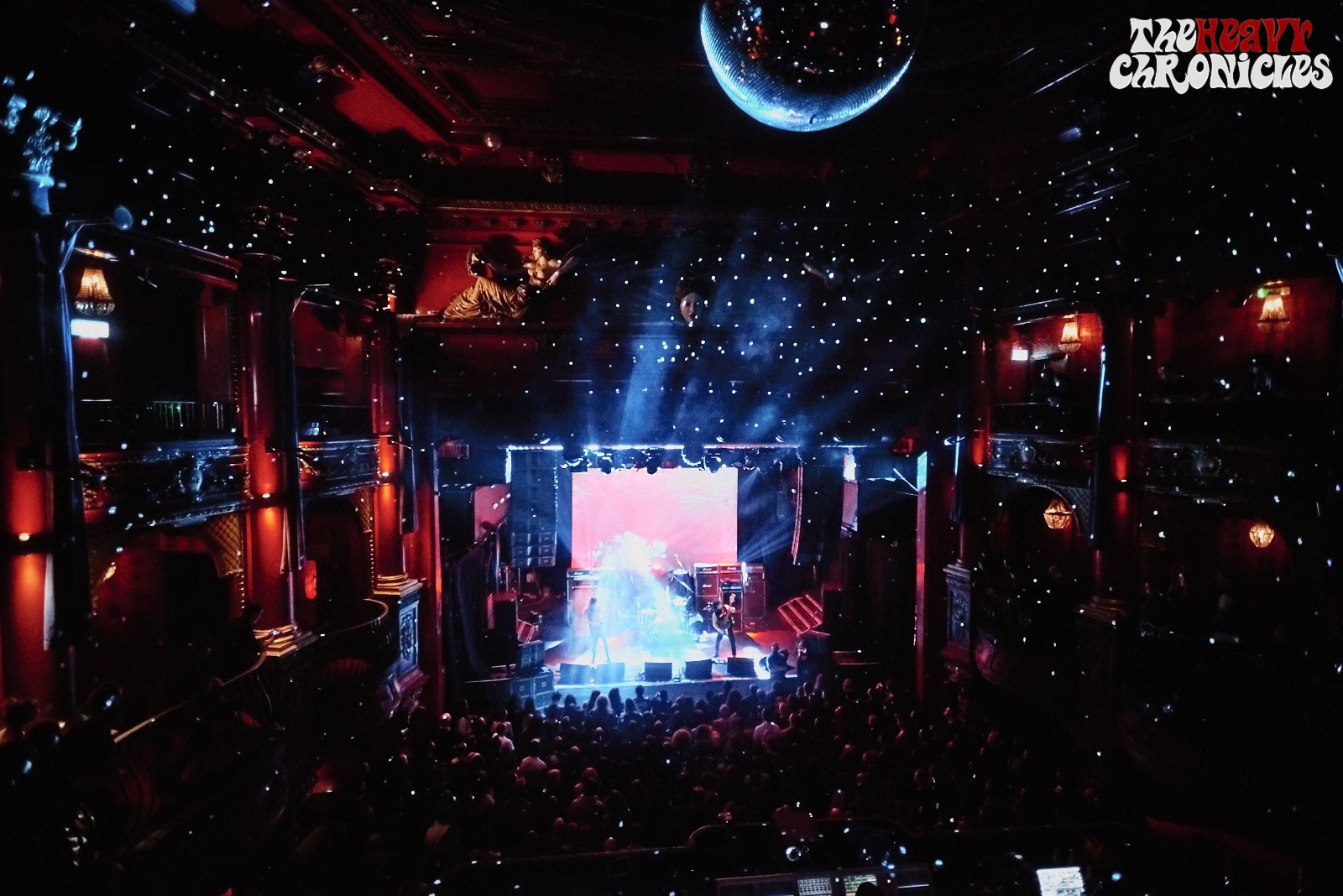 I didn’t fall in love with ORANSSI PAZUZU‘s mix of psychedelia and black metal at first listening, but the creativity of the Finn’s last album Värähtelijä really took me aback. On stage, the five musicians seem lost in their instruments, yet their union creates a fabulous noise halfway between some early Enslaved black metal and spellbinding psych rock. The melodies’ Eastern influences are drown underneath a thick layer of distortion and the outcome is so hard to pinpoint that it’s impossible not to admire these alchemists. Oranssi Pazuzu is a deeply original band who will inspire many, without the shadow of a doubt. My only regret is that they didn’t bring any vinyl at the festival, for such music deserves to be heard on the best format possible.

Once out of the dream, TROUBLE bring us back to reality. The musicianship is some top level one, but their Judas Priest inspired heavy doesn’t win me over at all… After merely two songs, we decide to have a food break. Once energy levels are replenished, we can get some more heavy with WO FAT’s stoned out blues. The sound is massive on The Underworld stage and the Orange amps are doing the job, but the absence of groove in Kent Stump’s vocals literally breaks the spell for me. Although I enjoy Wo Fat on record, the live show lacks something that can make them stand out after such a day of mind-blowing performances. 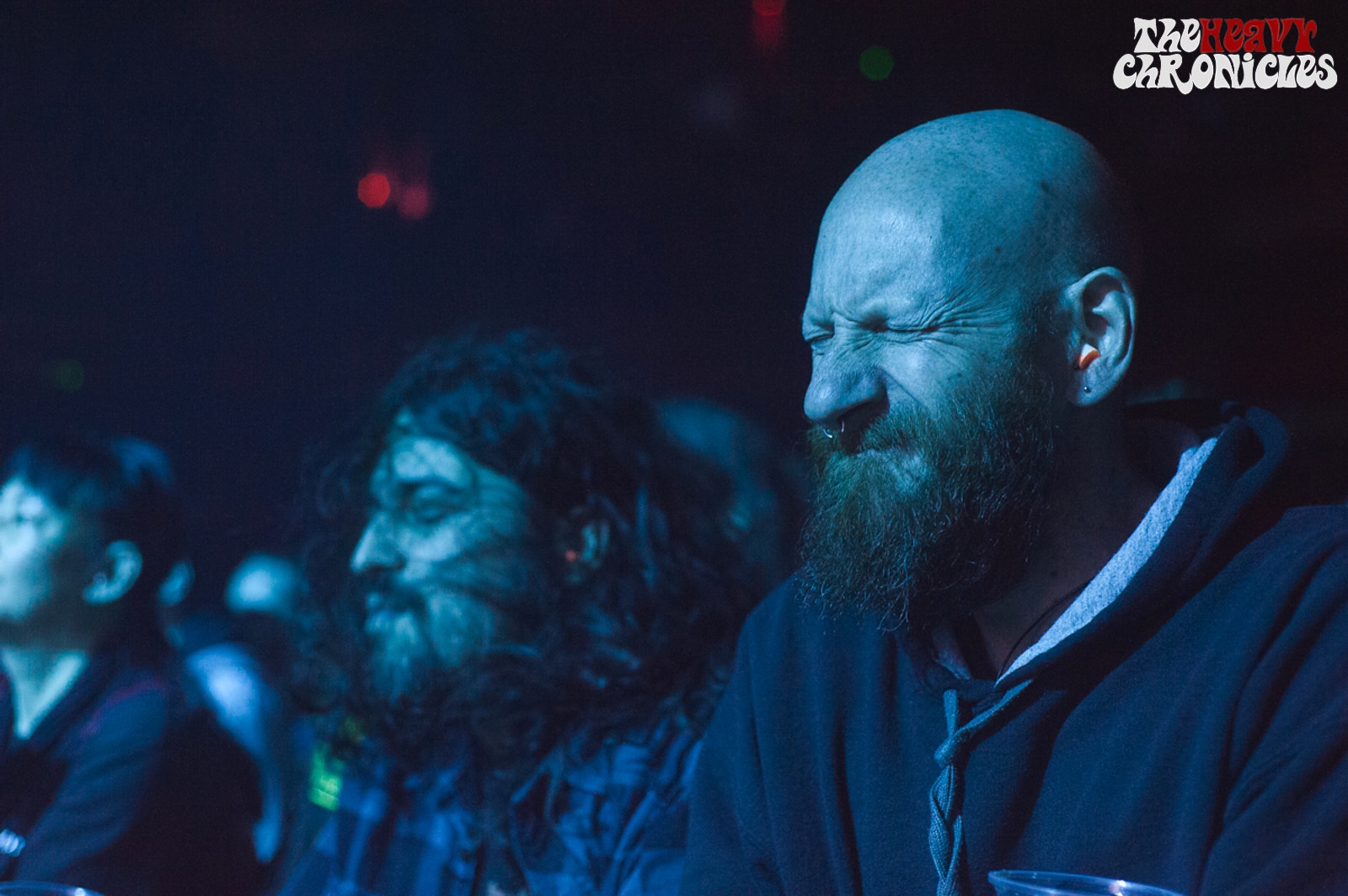 It’s now time to go out in style with GODFLESH. The duo kick off their show the same way they did at Brutal Assault in Czech Republic in 2015, with tracks off their last album A World Lit Only By Fire. The syncopated rhythm of “New Dark Ages” or “Curse Us All” are perfect to wake people up by 11pm, when more “mechanical” songs like “Towers Of Emptiness” brings the energy down a notch. Thankfully, after six songs, the band draws away from drum machines to play older songs like “Christbait Rising” so we can all joyfully move our heads and butts. Just as Oranssi Pazuzu, Godflesh is a one of a kind act with a sound and an attitude that don’t have much to do with Black Sabbath (apart from hailing from Birmingham). Closer to electronic music than it is to metal, Godflesh’s music is the proof that Desertfest can open its door to more freakish music while still booking heavy acts. And when it comes to heaviness, Justin Broadrick definitely knows his thing. – Mathieu 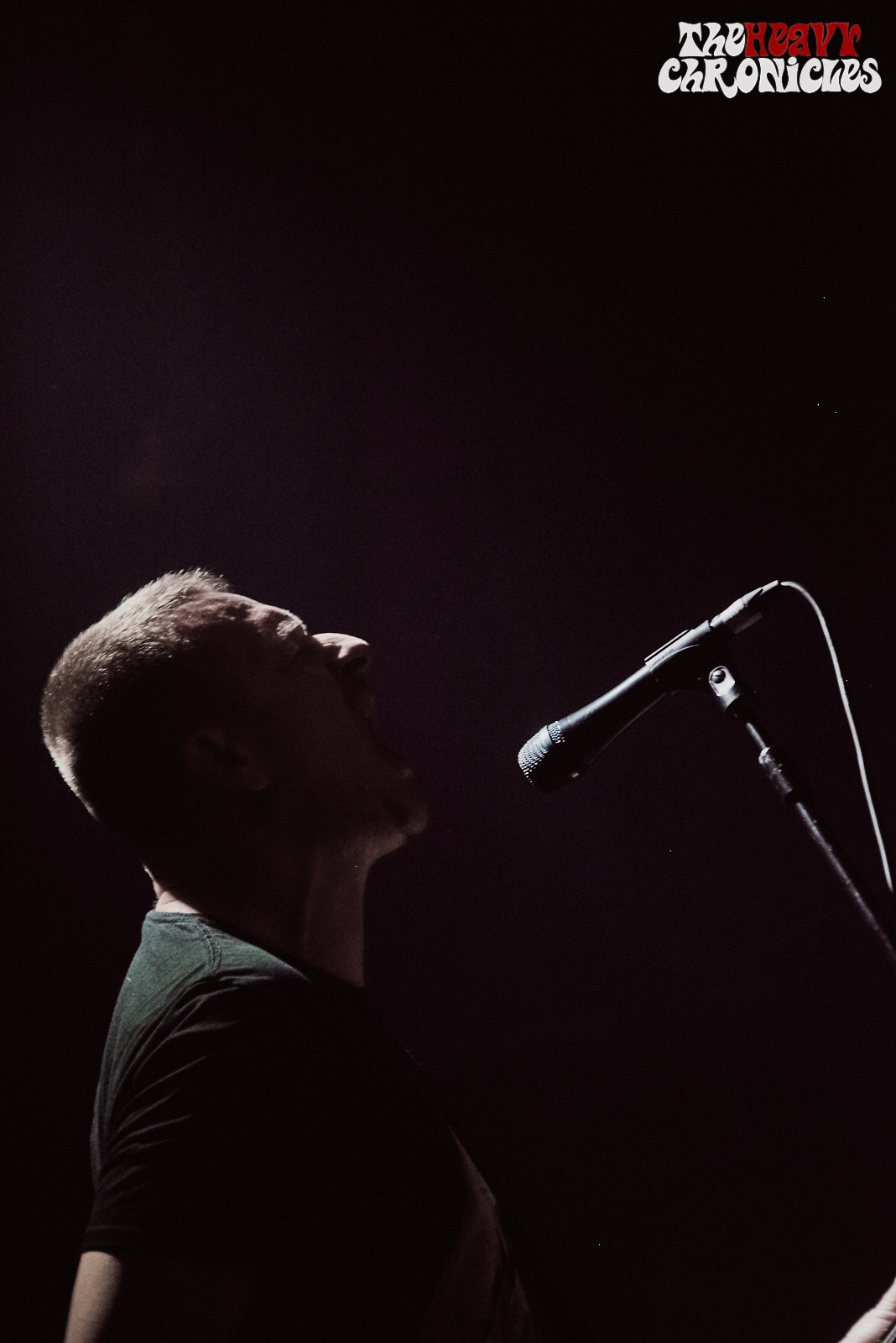 While Mathieu’s weekend is wrapped up with Godflesh’s refined industrial tunes, I leave for more rock’n’roll auspices to (finally) discover a band who has been gaining much recognition lately: MOTHERSHIP. The atmosphere when I enter the Underworld? On fire. As if the band and crowd knew that the weekend was coming to an end, and it is now or never to party all together. The Texan trio is all smiles on stage, and if just like my team mate Mathieu, Wo Fat’s performance – who are for that matter fucking bosses – didn’t win me over, I’m having one hell of a effin’ time right now. The Mothership guys are sweating the spirit of Rock’n’Roll through all their pores, everyone’s enjoying themselves, yet it feels all weird to think that Desertfest 2016 will be over in just a few hours. So we cut loose until the very second, we give our all. And as the band said so well when rendering their ultimate riff:

“Rock’n’roll is alive because of people like you.” See you in 2017, Desertfest…

READ OUR REVIEW OF THE FRIDAY AND SATURDAY