Written by Katzenjammer• 5 May 2016• Interview 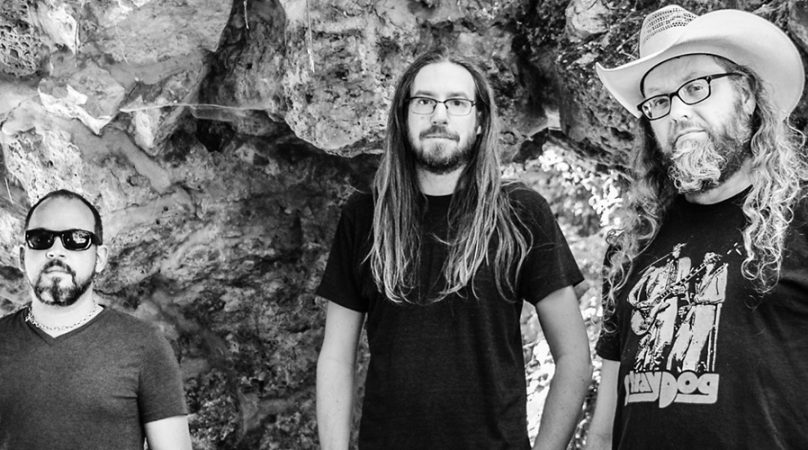 In the sidelines of Desertfest Berlin, I had the chance to sit down and chat with the kind and friendly Kent Stump, WO FAT’s vocalist and guitarist. Sporting his iconic cow-boy hat, he spoke about the creative process behind their upcoming Midnight Cometh, as well as the musical and political roots of the Texans’ very own swampadelic sound.

How’s the « Texas » tour going with Mothership for you so far ?

The tour’s great! In a lot of ways, it’s exceeded expectations : the turnout is great, we’ve nearly sold all of our merch, and… we’ve used three bass amps. We blew up the first one, then the back up, and fortunately we managed to get one on the road. Let’s see if we can manage until the end of the tour!

You seem to be touring more in Europe than the US.

We run a recording studio in Dallas, Texas, so it’s difficult to be out of town for too long. And it’s just better for us to come here – the crowd support over here is amazing. In the US, touring enough to break even or make a profit is just too difficult: a lot of ground to cover. But Texas has a diverse scene, with some very cool bands. Things like Psycho California and Psycho Las Vegas – with unbelievable line-ups! – are starting to cause a bit of a shift in the US, spreading the word a little bit more.

“We’re using a lot of blues and voodoo imagery, to talk about corporate greed. (…) Guns, arms race, climate denial… so much of it is corporate-driven.”

I’ve had the chance to listen to your new album, Midnight Cometh (which, in my humble opinion, kicks ass !) I felt that there was a story unrolling throughout the songs, with a pre-apocalyptic vibe.

Maybe not a linear story, but yes, definitely an overarching theme. « Three Minutes To Midnight » is a reference to the Doomsday Clock, which has to do with a number of things like climate change and nuclear proliferation – things that could lead to our demise as a species. We’re using a lot of blues and voodoo imagery, to talk about corporate greed. What Big Oil is doing for example, it’s pretty much selling your soul for short-term profit, and we’re all going to suffer from the consequences. Guns, arms race, climate denial… so much of it is corporate-driven.

Well, living in Texas, you must feel surrounded by that kind of greed…

There are a lot of cool things to do there. We have the studio there, family as well, and we’ve been in the State for 25 years. But yeah, Texas is a strange place for us to be. As a band we’re pretty progressive politically, and Texas is not! Except for Austin and Dallas, maybe.

Your signature sound is definitely there on Midnight Cometh, but you’ve brought more percussions into it. What was your inspiration for that?

We’ve always really dug African and Cuban music, as well as salsa. I’ve always thought it’d be cool to take this rhythmic approach and apply it to metal. So I wanted to bring in authentic percussions in a way that doesn’t make us sound like Santana. I mean, I like Santana! But we’re not trying to re-create his thing. We’re doing this more as an experiment. For now we can’t reproduce it live, we’d need extra musicians to do that… but some day we might. In the future, I’d like to keep on experimenting with African music.

I’m a big blues fan, and I can also hear that in your music.

Most definitely. Our conscious decision, when we started the band, was to evolve within the blues melodic paradigm. Howlin’ Wolf, John Lee Hooker, R.L. Burnside, Stevie Ray Vaughan, Johnny Winter are big influences for us. Actually, half of the people I just quoted were from Texas!

How does your songwriting work usually?

It generally starts with riffs. I’ll have a fairly complete song structure, then we get together and jam on it. As we play it together, I’ll be like – « oh, this sounded better in my head ». So things will change. We record all of our rehearsals, which makes it easier to see what works and what doesn’t. Then, I write the lyrics last – it takes me forever… I labor over them probably more than I should.

To me, one of the things that set your songs apart is their unpredictability – listeners are following a riff and then boom, a new one comes out. Do you work actively on that, this element of surprise ?

My ideal is to take the listener on a journey, a story flowing from start to finish. And I don’t want it to be boring, because our songs are pretty long. Sometimes it starts as a rythmic thing : « maybe it would be cool to move from a straight to a triplet kind of feel ».

When you’re playing live, do you leave some room for improvisation?

Yes, definitely. All of the guitar solos are improvised, and they’re open-ended – I’ll cue the guys to let them know when it’s time to move on. The songs, in general, are a mix of jams and structured stuff. Improvisation is pretty important to me because I have a jazz background, I studied it at the University of North Texas.

Do you think that in parallel world, there’s a version of you with short hair, playing jazz for old people?

(laughs) Probably! That was the plan when I was in college. But life takes you down differents roads… What attracted me to jazz, is that in the 40s and 50s it had an edge, a revolutionary vibe. That’s gone, as far as the scene goes – which is probably made me go in this other direction.

You guys have been together for close to 15 years. What would you like to do as a band that you haven’t done before?

Our first show in Europe was very special, I’d been meaning to do that for 10 years. Now, we’re getting to play Hellfest this summer – it’s very exciting, the biggest gig we’ve ever done. But honestly, I wasn’t expecting things to work out as well as they did. We just wanted to jam a bit, maybe play a show or two… We’re not making a living with the band, but we’re having a great time, so I’d just want it to continue.

I’ve heard that you got thrown some glass jars at you while playing at Les Combustibles in Paris. Is that still your craziest tour story?

Yeah, that was our first show in Paris – a great time, by the way. We were told to be careful because an old lady upstairs was throwing water at the bands. I guess she’d had enough and took things up a notch, because she threw glass jars of turpentine and paint at us… On our bass roadcase, you can still see the glass and paint impacts from that night! That’s still our craziest story. We’re pretty low-key on tour – not throwing TVs out the window or something (laughs). We’re getting too old for that…