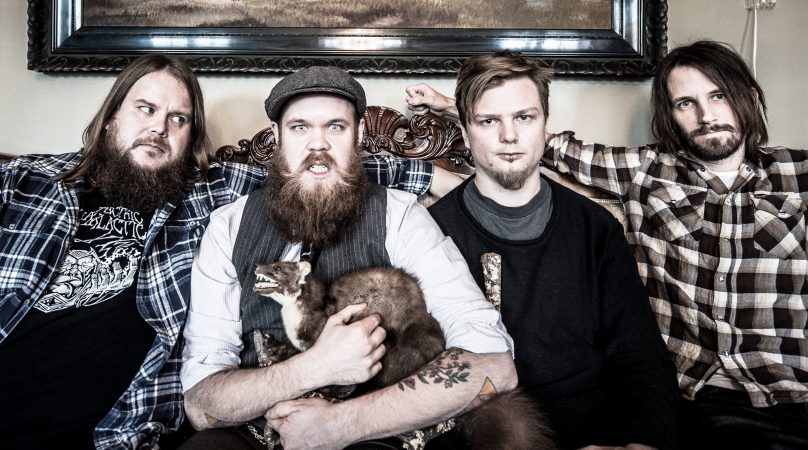 With a full fifteen-year of existence among the European rock scene, Swedish heavy rockers GREENLEAF have always been that band who would get you all amped up on their records, then keeping you guessing whether you’d be able to hear any new music from them any time soon… Formed in the late 90’s as a side project by Dozer’s genius guitarist Tommi Holappa, Daniel Lidén and Bengt Bäcke, GREENLEAF have since then welcomed various vocalists from Lowrider’s Peder Bergstrand to Truckfighters’ Oskar Celdermam. Having five full-lenghts under their belt, the band has finally grown as a full-time project – and consequently gained more recognition – when super talented songwriter and vocalist Arvid Jonsson joined them, right before the recording of their 2014 cornerstone Trails & Passes (Small Stone Records). And THIS is when GREENLEAF really took off on a larger scale. The profusion of talent in this band has been outstanding from the very first day, and they now reached a super high-voltage combination of elements that is meant to blow minds when on stage, delivering this blend of stoner heaviness and delicious classic rock overtones. Being part of the Make It Sabbathy team in Bordeaux, France, I had the privilege to promote their show in my town this June with Weedeater (“how explosive”, you say) and jumped at the chance of catching the band’s main men Tommi Holappa and Arvid Jonnson to investigate on the kind of riff feast they were holding in store for the near future. An interview that comes along at just the right time, as the band is set to release their new album later this winter on Napalm Records.

Your latest album Trails And Passes showcases perfectly this new level you’ve reached as a band, musically speaking as well as in terms of reception from both the fans and the press. How would you explain that?

Tommi Holappa (guitar): Of course, I felt even before the album release, when Arvid joined the band. We had a good chemistry together, and our drummer, Sebastian, was also pretty new… We really felt like we had something.
Arvid Jonsson (vocals): We decided pretty early that it would no longer be a side-project.
Tommi Holappa: And Dozer doesn’t play so much, so we had more time to write songs.
Arvid Jonsson: Writing the songs and recording was pretty easy, because we do well together.

This is why the recordings felt really natural, like flowing.

TH: From the writing to the recording process, everything went really smooth indeed.
AJ: It’s strange, I don’t know how many years apart we are, in age.
TH: I’m forty…
AJ: And I’m twenty six! It’s strange how similar we are in taste.

What about those music tastes then?

AJ: Well, we really like the heaviness in music but we also like the melody, in the way you can push a song.
TH: We have the same idea of how a good song is supposed to be written. We always come up with the same ideas.

“Greenleaf is not a band who spends too much time on things, when we talk about songs, it’s always about the first feeling.”

Tommi, you’ve been the backbone in Greenleaf since its formation in the late 90’s, whether it’s in terms of songwriting or presence. Do you also contribute in writing the lyrics and vocals part?

AJ: I do all of it.
TH: It’s no use for me stepping in and tell him what to do, because he does it really good!
AJ: You know, I’m not new at playing in a band. I didn’t play so much rock, I did a lot of different stuff, pop, soul, jazz… I’ve been writing songs for a long time.

Now I get it. I really found there was a strong pop background in the way you put out vocals in Trails & Passes. It really makes you stand out from the actual heavy rock scene. Especially the Scandinavian one which has been quite burgeoning in the past few years.

AJ: It’s actually hard to play in Sweden, because there are so many bands. It’s strange that bands get big here, then no one cares about them back home. Maybe it’s a good thing that we all need to go in order to play.

Which bands would you say are outstanding in your country?

TH: Graveyard, of course…
AJ: Blues Pills. And I also like some folk stuff, lots of folk stuff.
TH: I can only think of Lowrider, but it was a long time ago since they released something. In stoner rock, there are so many bands now, especially in the retro style.

Everywhere, not only in Sweden! They’ve been blossoming like mushrooms, all wearing bell bottom jeans…

TH: (laughs) They all buy their clothes at the same place.
AJ: We want to look a bit more like nerds… We have one redneck, one hipster, one stoner rock guy and one handsome guy, so we’re good. (laughs)

What about the signing on Napalm Records this spring, how did it happen? For a long time, you were on Small Stone Records, which are great purveyors for all heavy stuff…

TH: We wanted to have someone who could push us even further. Get some tour support, and promote the album a little bit more. David at Sound of Liberation (Greenleaf’s touring agency) knew Sebastian at Napalm, he sent him some demos then he came to a show in Vienna…
AJ: It’s pretty funny, because that show started on a power breakout, so I had to perform a song a capella, then the power went on, it was perfect.

Maybe that was just your luck, and the best way to show him how capable you guys are when it comes to live shows.

AJ: Even with the power off! “Our upcoming album is just Greenleaf taking a small step forward. There will be that 70’s vibe, just heavier.”

So you’re currently wrapping up the new album. (the interview was run in June 2015)

TH: It’s recorded. Four days in the studio in Stockholm, everything was recorded live.
AJ: Greenleaf is not a band who spends too much time on things, when we talk about songs, it’s always about the first feeling. If we talk too much about a song, we start hating it after that.

How could you describe this upcoming record, in comparison with Trails & Passes?

AJ: In terms of vocals, I can say there’s a bit more melody in some way.
TH: There will be some heavier stuff too. It’s just Greenleaf taking a small step forward. There will be that 70’s vibe, just heavier.

Any clue on the release date?

TH: Hopefully, it’ll be out in the winter of 2016, and we also hope being on tour around that time.

AJ: We’ll be around a lot. (smiles)
TH: Hopefully, they’ll make sure we play everywhere, all the time. That’s what we felt when Trails & Passes came out, we had these jobs and couldn’t take too many days off. Now we want to step our game up.